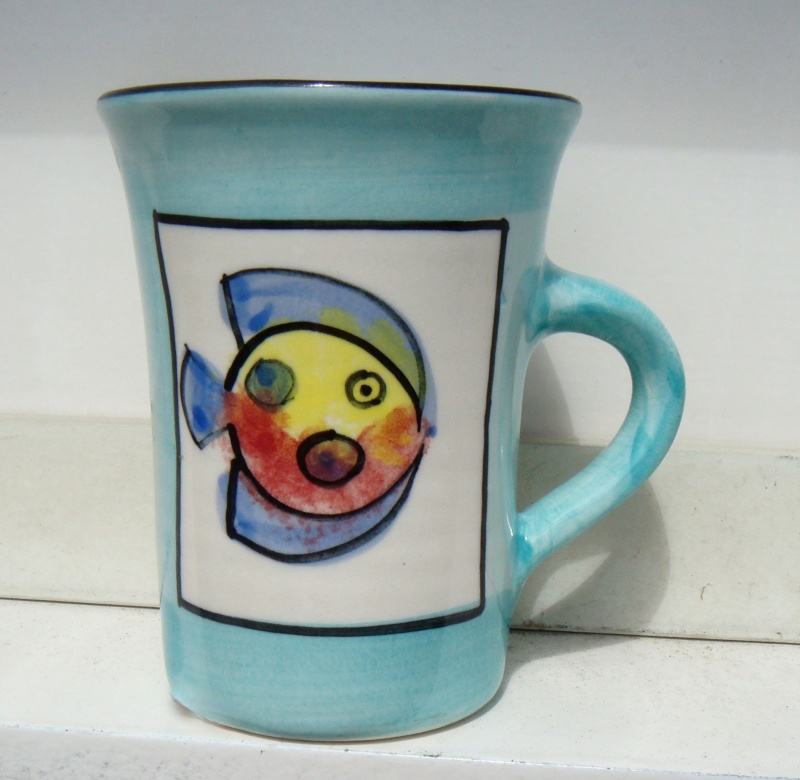 I found this neat mug today 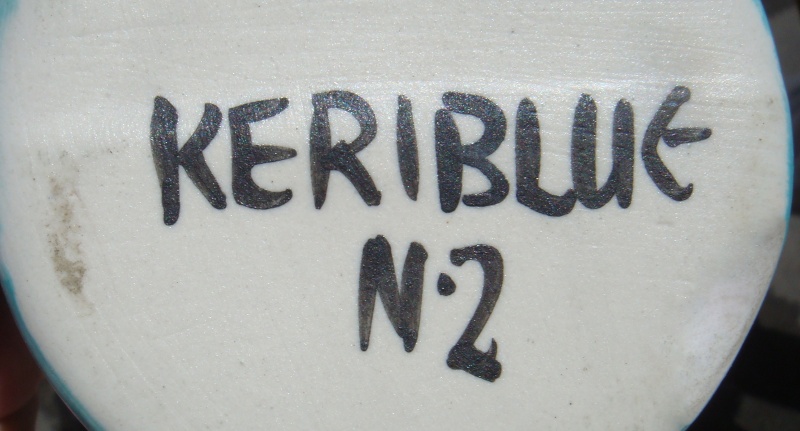 Most the Keriblue mugs I see in the opshops appear to be castware, and have some form of advertising on them that doesn't appeal. This one is a winner at $1. "Black Pohutukawa" is a current Keriblue range and this one is in perfect as new ($34.50) condition. I can see no indication of it being cast so I think it must have been jiggered. 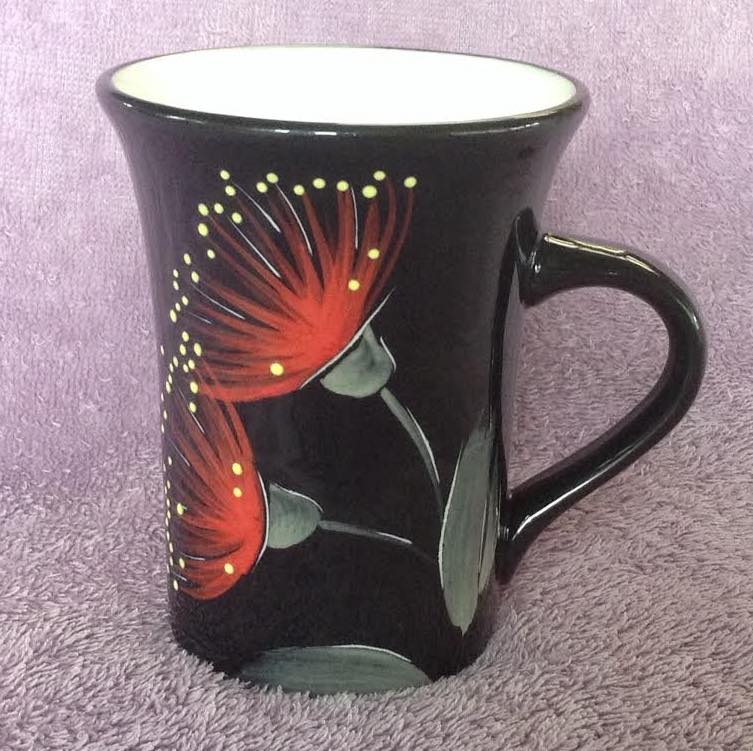 Keriblue mark similar to above

a few minutes later ...
I've added a shot comparing with my other Keriblue mug. 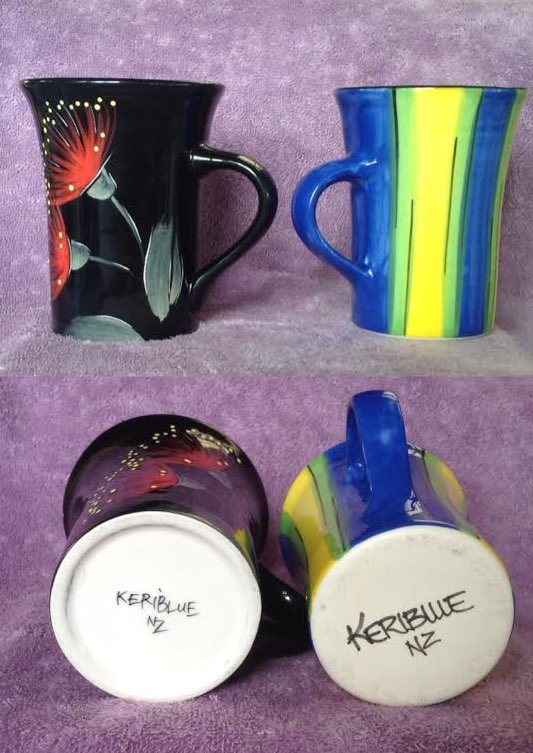 Two mugs, essentially the same shape. Right mug is slipcast. Left mug is jiggered and has a stick-on handle and a footring. The newer mug is far superior in quality. Top marks to Keriblue for this improved product.

---------
Bearing in mind what I have written below, my opinion above wrt the manufacturing process stands, but it is in no way intended as a criticism of the early Keriblue original artwork.
. 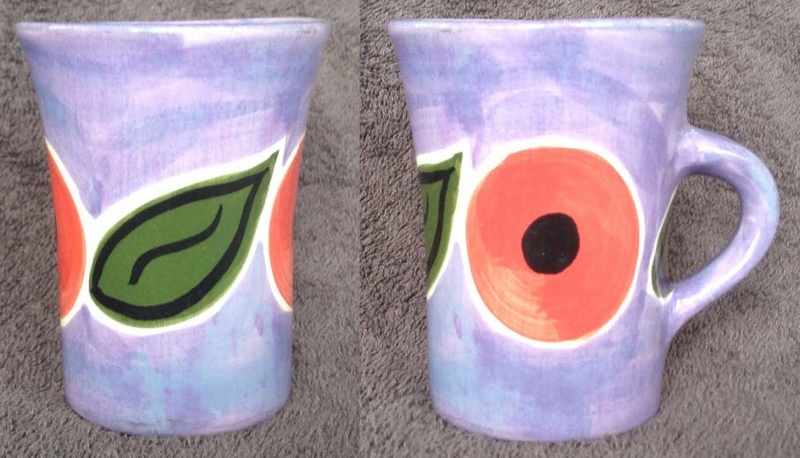 This is a cast Keriblue mug signed "Caryl Lindsay N.Z. '94". 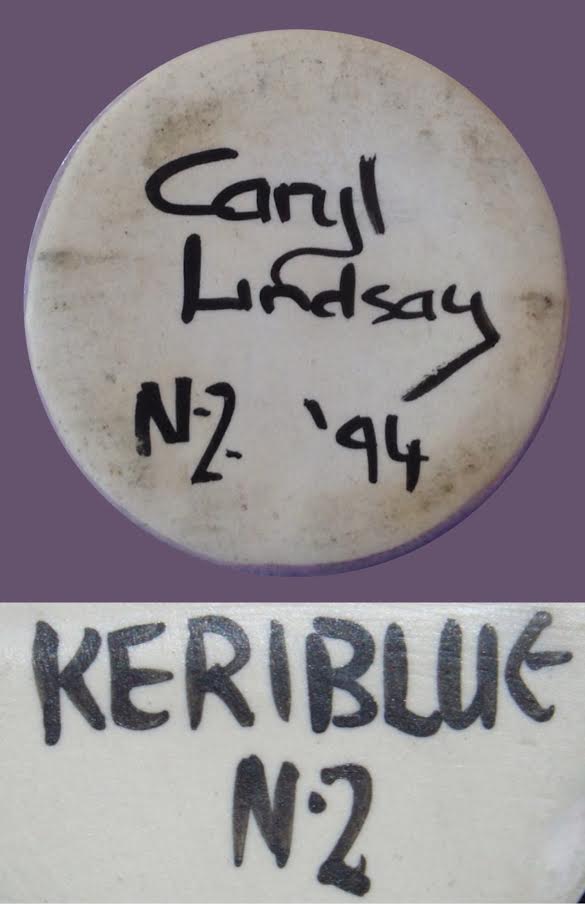 The way the NZ is dotted (upper photo in montage above) appears to be the same as mumof1's Keriblue mug (lower in montage), which leads this topic. The artwork has some similarity to that mug but not so to my striped one which is signed by a different hand.

I have searched without success to see if I can find a connection between a "Caryl Lindsay" and Keriblue. What does keep turning up in Kerikeri and Whangaroa is the combination of two artists' names Maria Lindsay and Caryl Watts.

Following up on that idea, I found a bio of Caryl Watts at Masterpieces Gallery in Kerikeri stating that Caryl had established and run a ceramic factory in Kerikeri which she later sold. "Caryl" is not a common spelling so I'm pretty sure I am on the right track.

(I have given away my alternative thought that this mug was a self-decoration as Studio Ceramics and other potteries offer.)

Kat may know something of the company history. I have passed Keriblue many times but I have never stopped in.

Val, have you taken any interest in the Keriblue history yet?

As Caryl is also identified as living in Arrowtown I made a quick google search and located carylwatts.co.nz. I have sent Caryl an email asking about her history as a ceramicist.

Oh, and the Companies Register does indeed show Caryl Watts as the initial owner of Keriblue.
.

Sorry no I havn't looked into them.

Caryl Watts called this morning, but as I am not set up for an interview I have passed her details to Val to do the job properly.

In brief, although forgetting the exact year the business started, Caryl gave me some ages from which I worked out 1992 or 1993, so at 1994 my mug could be quite early.

At that time Caryl was using her maiden name, Lindsay.
Problem solved.

Thanks to Jeremy i have spoken to Caryl and i will interview her in a few weeks. Happy!!

I love my Keriblue pukeko plates and cup and saucer! 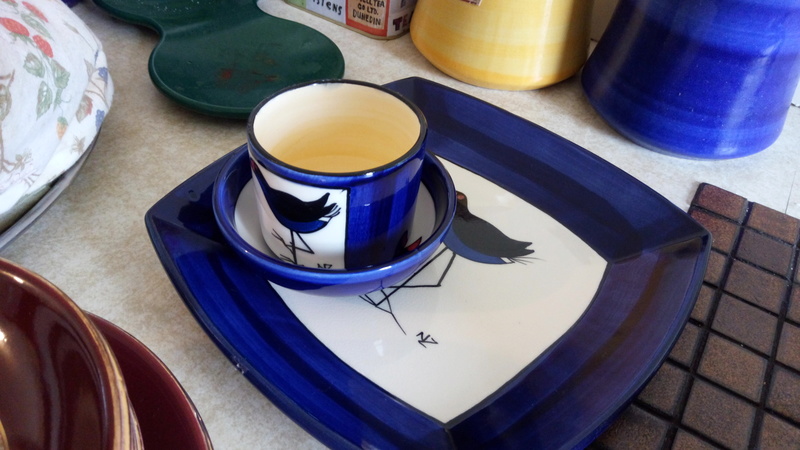 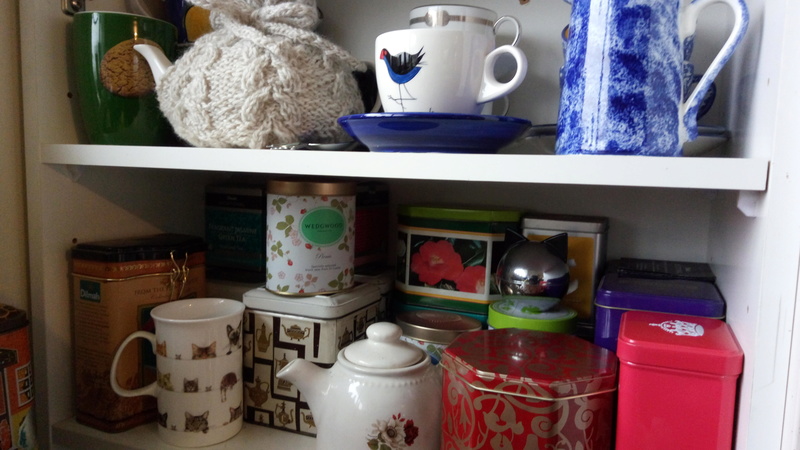 Keriblue info and marks some for gallery

Thanks to Jeremy's detective work we have tracked down the founder of Keriblue.  Jeremy and I went up to interview her yesterday. In brief:

Caryl was a property manager in Auckland, but had got to the stage in her life when she wanted to enjoy her creative side. She decided to turn her hand-potting hobby into a business and moved to Kerikeri.  The fledgling business was successful, and she soon began exploring slipcasting to speed up manufacture.  At a time when buyers were eagerly seeking bright colours and hand-made ware, the business took off and at its peak Caryl employed a team of eight.  Shapes were created on the wheel. then given to Hemara Hemara to make moulds.  She also had a local mould maker for a time.  Caryl's right-hand helper was her daughter, Maria Lindsay.

Caryl had no background in slipcasting and no real mentor to help her as she learned the complex processes involved. She made much of her own equipment with bits and pieces gleaned from the local demolition yard and auction. Materials came from Western Potters Supplies, plus a supplier from Hamiltion.  She recalls this period as a very happy time, with lots of laughter and creativity alongside the stresses of building up a business.

The most popular item was the mug which Jeremy has posted above.  She also made dinnerware, platters, vases, casserole dishes etc.  She sold throughout NZ, particularly through Kirkaldie and Stains (Wellington) and Stevens Giftware. She promoted her wares at trade fairs and on sales trips around NZ.  There was no need to advertise - word of mouth was sufficient!

As the business grew, Caryl felt that mass production was pulling her away from the creative expression which had driven her move to the north. After five years she decided to put Keriblue on the market, and it sold very quickly.

Caryl is now an accomplished painter, and divides her time between Arrowtown and Northland. Keriblue is still operating, and has recently moved from the Kerikeri road to State Highway One just north of the Kerikeri turnoff. It is well worth a look!

Caryl told us that the hand-painted marks on the base are one way of identifying her work. After she sold, other owners introduced decals as backstamps.  Her very early work is marked "Caryl Lindsay" as on Jeremy's mug above.

There is more to add to this story but this will have to do for now.

A big coffee cup discovered yesterday. Keriblue saucers seem to be properly marked, but cups are often blank on the base. 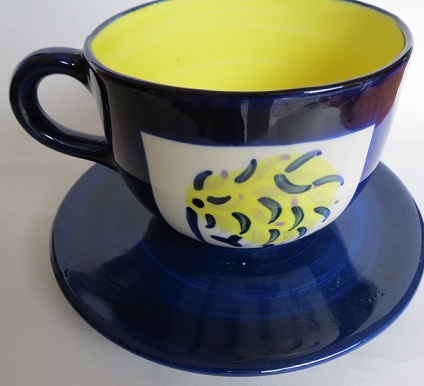 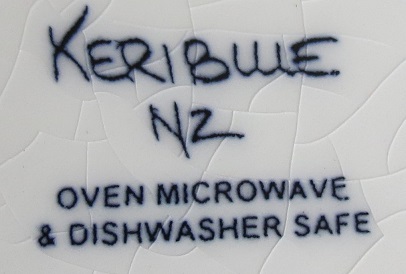 A sweet wee tile from the existing Keriblue shop. 9 cm across. 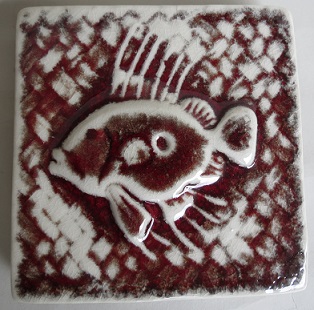 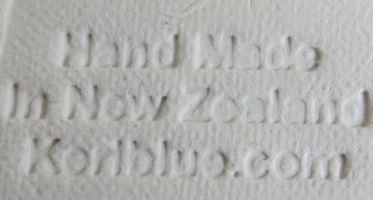 Brilliant thanks Val and Jeremy.
I see their work on a regular basis, but don't have any of my own .... yet. 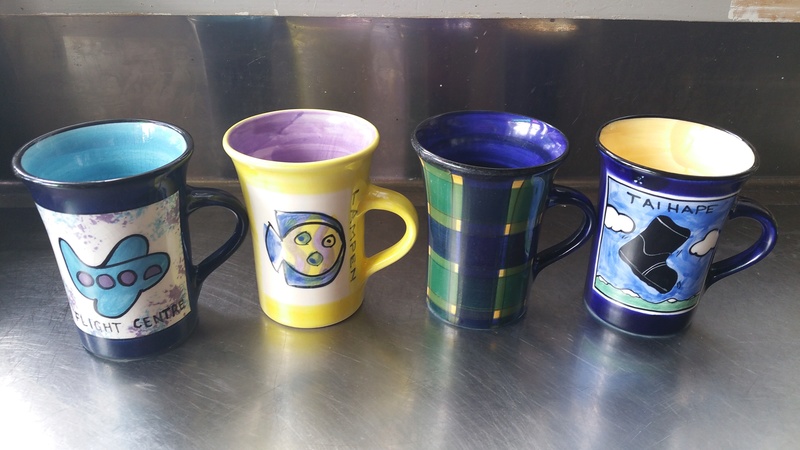 Okay the blue tartan pattern mug has a hairline crack ..... 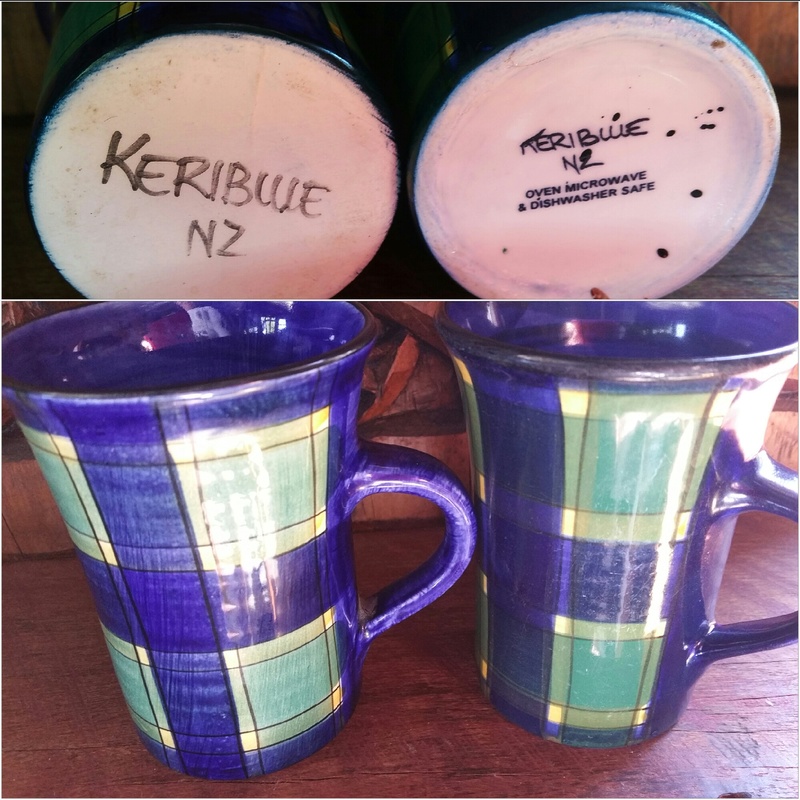 .. I really like this one and would you believe it... there was another in an op shop yesterday.
Looking at them together.
Different backstamp and slightly bigger than the other.

The one on the left is older - Caryl told us that she didn't use decals.

The older one is the one I like best...

I have two Keriblue mugs with the same design, (TMP Worldwide is the logo) they are nearly the same in dimensions, but one weighs 344gm, the other weighs 252gm!

Here is a Caryl Lindsay duo from the early days of Keriblue. Very happy to have it - thanks Jeremy for making that connection. 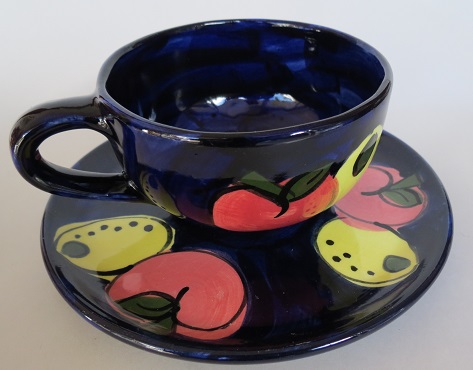 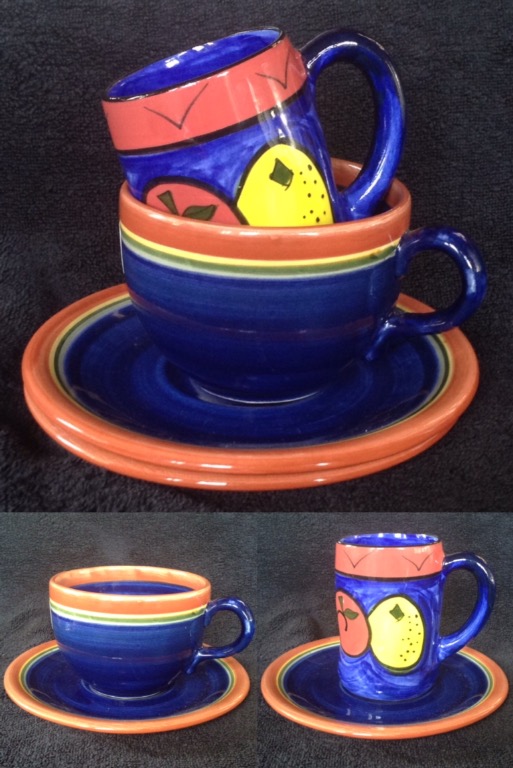 I don't suppose the mug belongs on the saucer but it does fit. 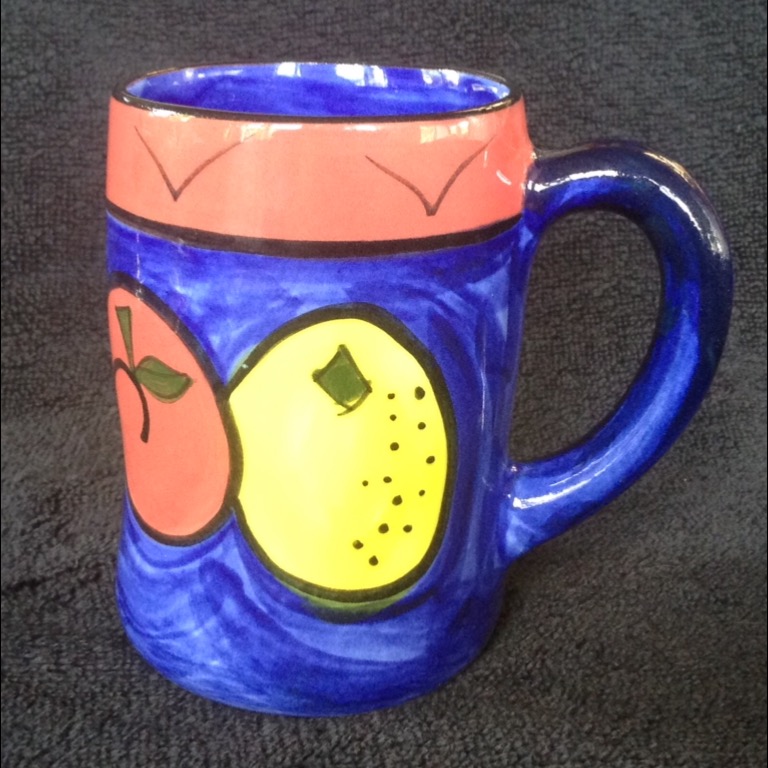 Not seen this shape before. 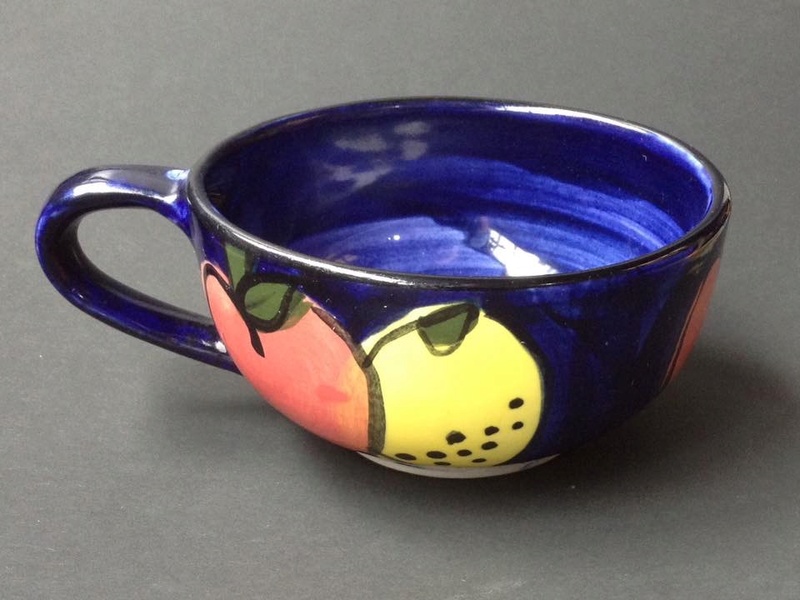 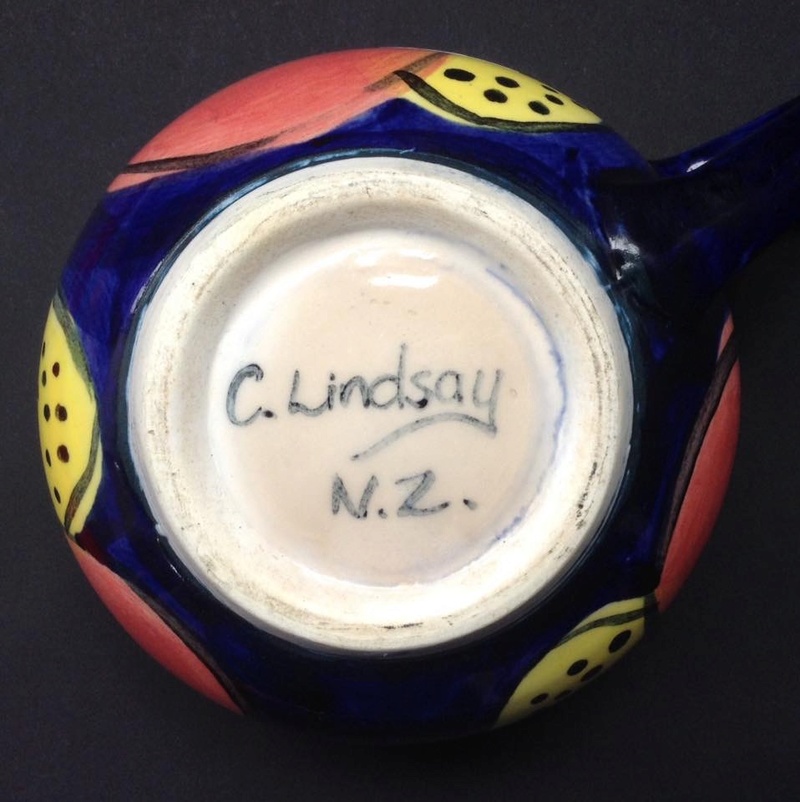 Keriblue made some nice plates over the years. 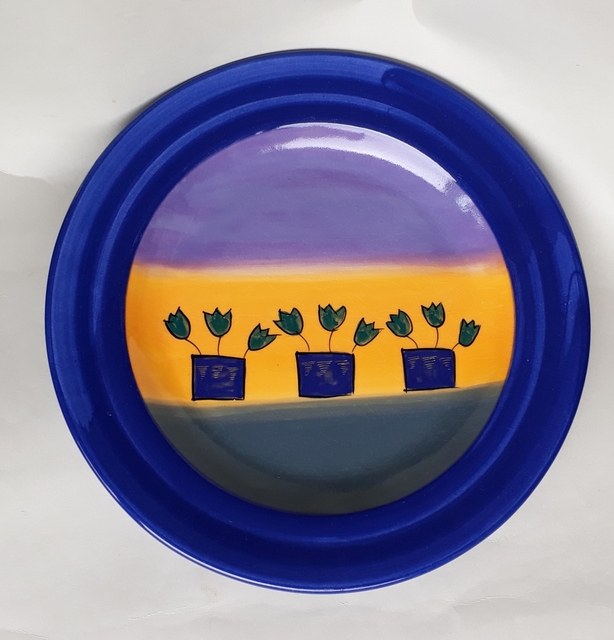 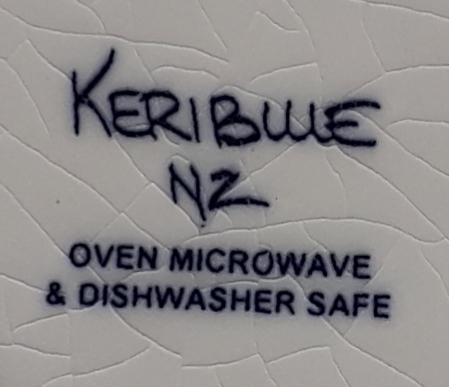