For the longest time I have thought that these may be made by Teal Ceramics ....

Why? Well because of the colourings and the fact that they have numbers on the base.
There have been a few listings of this type of textured ware recently and all have been listed as Crown Lynn. Even the Museum has a couple of pieces in the Encounter Gallery and I believe that they have called them Crown Lynn too.
How delighted I was to see the comment on the listing above to say that these were made by Teal !!!! Do share your knowledge on this with us please Jeremy.
I checked out the Teal catalogues that you added to the site, but didn't see any of this series.

I make it up as I go along Ev.

As you say, based on numbers and colour, but also on shape.
Nothing in the catalogues which are on the forum for everyone to see.

The seller originally had them as CL, which we know they aren't, and as I said on the listing I have seen them advertised elsewhere as same.

At first I thought they must be something German, then it hit me, so I checked over the Teal catalogues to reinforce my hunch.

I have looked at them before with a view to buying as CL but never took it any further.

I'm glad to see you are inclined to the same opinion, but also aware that as a site administrator for a NZ pottery website you must behave a bit more responsibly.

I had anticipated a move to the Other NZ manufacturers listing but that didn't happen. Also the Hornsea was added and price changed.

If you want an absolutely positive, guaranteed ID I can take a copy picture and go and see the "Teal man", the former mould-maker there, who lives just 10 mins away. I don't know him personally, but I'll be seeing his neighbour Mike (who gave us the brochures/catalogues) this weekend. Yeah, I should do that huh?

Hi Jeremy. You have catalogues?? Would love to see some pictures of pages if possible please? i have a small but loved group of Teal. One item is not even confirmed yet and I have always wanted to find out for sure. It is a blue planter with Teal impressed on bottom. Another treasured piece was given to me by a friend who knew someone from the pottery.

This is all Thelma.

The rest is done with smoke and mirrors.

I'll see how it goes with these canisters. The guy was keen to collect pieces he had played a part in making so if I'm put in direct contact with him he may be able to ID a bit more.
Michael may have told me his name but if he did it escapes me.

Yes they are made by Teal!

Keith Sandford, one of the three founders of Teal Ceramics, has confirmed that these canisters are indeed early work by Teal.

In a telephone conversation we have just concluded Keith told me that he was one of three pottery workers made redundant from McSkimmings who set up the pottery.

Keith was was originally employed by McSkimmings as a quality control officer, with no previous pottery experience, and prior to his departure from that company had managed the casting floor.

Keith is very proud of some of his designs for Teal, mentioning in particular pieces in the "squound", or squared round shape, and a sealing lidded honey jar.

Most of Teal's production went to Australia.

Keith is happy to identify pieces that turn up which people think may have been made by Teal Ceramics. If you bring them to my attention I can pass messages on.

Brilliant fantastic that is just awesome thank you Jeremy

mumof1 found one of those textured pieces today and will load photos when she gets a chance. I'm really stoked to have my suspicions confirmed !! 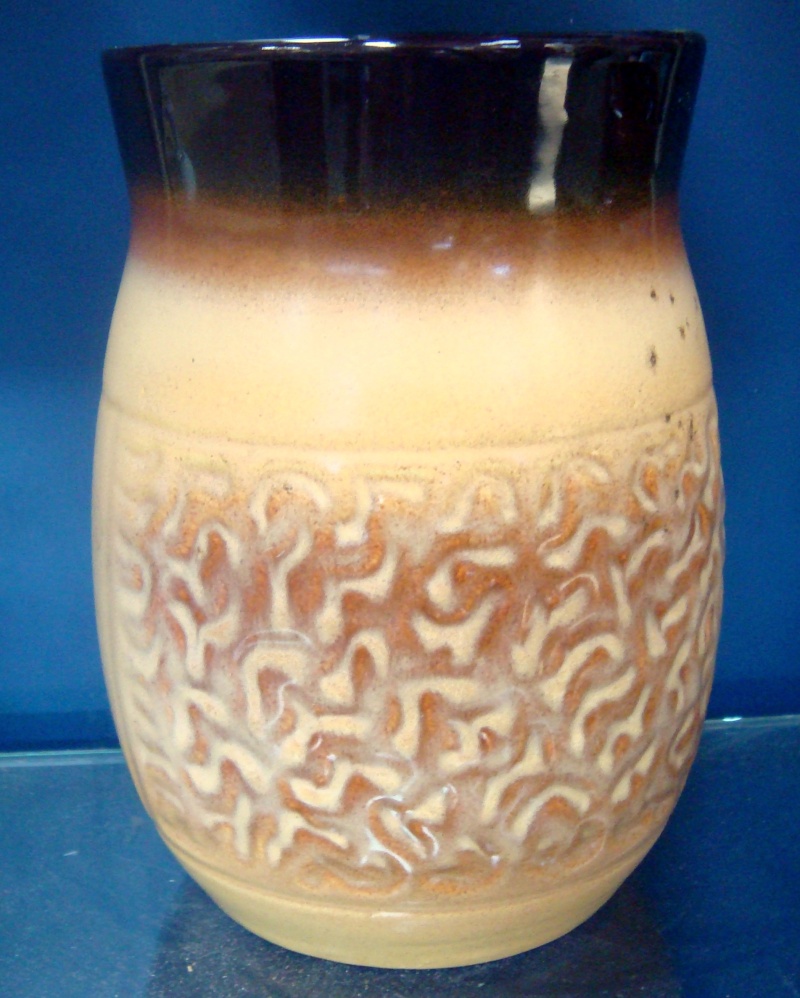 Here is a pic of the container I found today. There is no mark on the bottom, but from experience, if it had the printed mark, they wear off easily, and as this one looks to have been well used, I would think this to be the case. 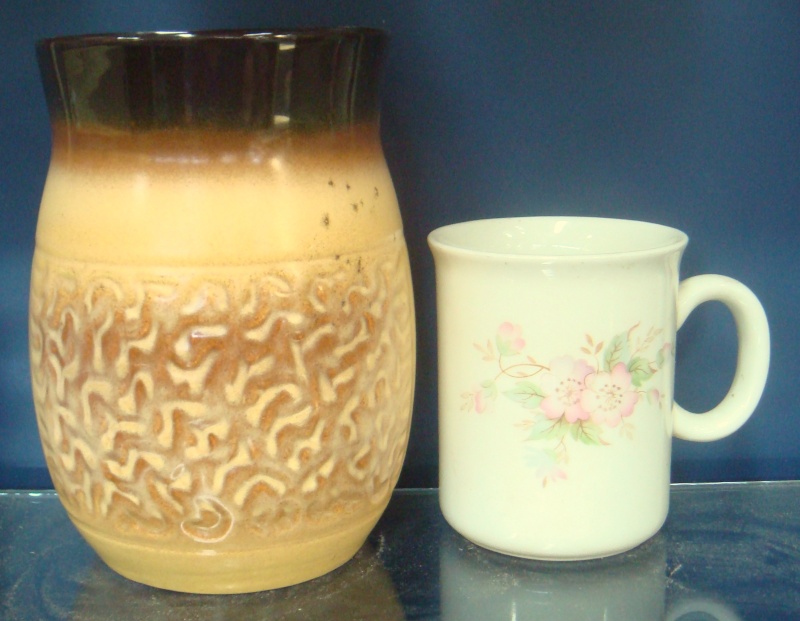 It is 150mm high, shown here with a mug for comparison.

mumof1,
the earlier picture for the listing had bases shown with an IMPRESSED number on the big canister but it looks as though I did not take a copy. From memory I'd go with 102 or 107 but that memory is fuzzy as it was the early hours. Seller will know.

Jan,
Yes, that's the listing that started this topic.

LOL-- I see !!  I had it on my watch-list for the Hornsea pot! I have not been keeping up with the threads lately opps!

getting distracted by foreign stuff

There was a nice Hornsea Blue coffee set somewhere on tm.
Looks way nicer than the brown.
It's here:
http://www.trademe.co.nz/pottery-glass/porcelain-pottery/other-british-manufacturers/sets/auction-699530949.htm

I checked back through my old photos.
The trademe Teal canister is 103.
(I think that's the large one.)