The Auckland Museum have many issues of the magazines that Crown Lynn published.
These are full of information and history about the Crown Lynn industry.
Here is a list of the issues that I found - but I still have one more item to look through!

Some examples of the articles that I found:

Jan 1963 - Less than 3 years ago handles were still falling off mugs! How they fixed the problem!

Oct 1963 - A fabulous photo of a Crown Lynn display in Suva.

July 1964 - Teal use the Reflections pattern for their airline crockery.
Article on the dry press factory - Electrical department.
Judges of the Design Awards do not consider the designs for the Crown Lynn Design Awards from a point of view of mass production.

Mch 1965 - Sapphire pattern introduced.
An item asking for old cups to establish a small museum as what was collected was destroyed
in a fire a couple of years ago.
An item on the 12 Potters shop in Mt Albert Rd. Jim Palmer mentioned and Jo Marshall in pic.

July 1967 - A cute article about the old ugly cups

Dec 1968 - Pics of the new Shape twenty-5 range.
Pic from Rothmans Industrial Design Awards 1968, shows winner Robert Drake's Yucatan,
saying that he was a past winner of the Crown Lynn Design Awards.

May 1969 - Photo of a plaque [Flora & Fauna] being given to the New Lynn Council to celebrate 25 years of pottery by Crown Lynn.
Photo of the Titian/Crown Lynn factory - candlestick vases are being produced.
Photo of an unusual plaque designed by David Jenkin and Mark Cleverly for the opening of Ceramic House - in the shape of a circle with radiating spokes like the design of the building.

Aug 1969 - The 9th Crown Lynn Design Awards are being held on September 2nd at the Display Centre Wellington.
Only 2,000 of the Cook Centenary plates were made.

Dec 1969 - An article about Waimea Pottery, photos of a young Jack Laird and an even younger Adrian Bevis.

1976 - Photo of the new Air New Zealand brown ware decorated with a koru that has just been released.
Pioneer range introduced.
Design Award entries must be in by October 4th.

Summer 1977 - Photo of the Bellamys new tableware design.
Sunflower and Sunseeker patterns introduced - the decals come from New York.
An item on Auckland Studio Potters Exhibition at the Auckland Museum. Photos of Rosemary Brittain and Warren Tippet's work. The selector was Doris Dutch.

Winter 1977 - An article about the modelling and making of the Carbine statuette. The Carbine Club call it magnificent!
Avondale Selection goes into production - Camelot, Bramble, Byways, Savannah.

Autumn 1978 - Earthstone range developed last year is now released in New Zealand, Australia and the Middle East. Autumn, Camille, Polynesia, Sandown and Landscape.
The 1979 Design Awards will not be held in Wellington this year.

Winter 1978 - Titian Potteries Ltd are manufacturing a wide range of kitchen and coffee ware article.
Also an article about Gibson and Paterson.

Summer 1978 - Sundowner pattern introduced.
Only 2,000 Army Memorial plates were produced.
Photos and article about the Hospital range that will become the standard range soon.
Country Fair is being produced at Titian.
Avondale Summer Selection released - bright - bold - some are black with patterns.

Autumn 1979 - Springflower pattern released.
Dave Jenkin retires as cheif designer in May, but will be retained in a part time consultant capacity.

Summer 1980 - Colin Leitch is appointed General Manager.
A fire in the decorating department article and photo.
The new Sapphire pattern release has been delayed due to the fire.
A photo of an old painting of Mr R.O. Clark pipeworks at Hobsonville.
The Ceramco 50th Anniversary trinket box - 6,300 shareholders were presented with one.
Cordon Kitchen range released.
Avondale range of giftware and mugs.

This is just what interested me when I looked through the magazines. There is much more to be found. Many of the magazines were aimed at the retailer with window display competitions etc.

The Portage Ceramic Museum has a pile of original NZ Ceramics magazines which include some that the Auckland Museum don't have. These are :

I took photos of all of these for future reference.

Wow! I'd love to have a browse through the magazines if I ever get to got to Auckland. 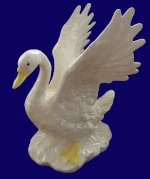