» Old Vase with handmade rose & leaves, is this Milton Pottery?

This appears to be very collectable .... bugger me that I can't find the info on the net that was there a year or two ago ..... a Dutchman .... oh never mind. I have/had a Hanmer sugar bowl for some time .... can't find it at the moment - perhaps it went into the Sallies box when we moved a few months ago ... but I know that I took pics

I'm fairly sure that this ware was handmade ..... but would like confirmation. 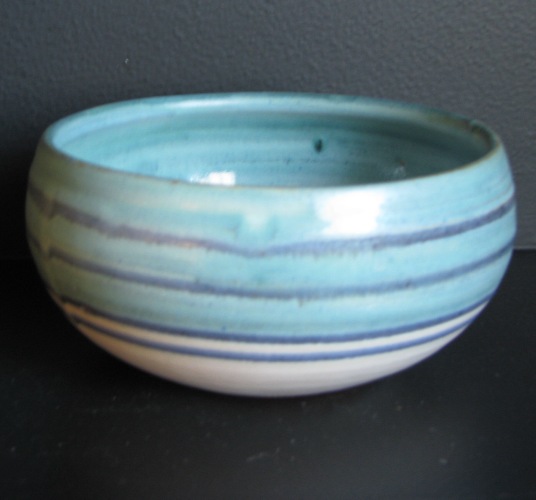 and the Hanmer mark - 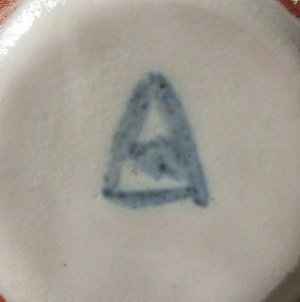 Any info on Hanmer Pottery would be most appreciated

I've been in contact with Hazel Ashton who worked at Hanmer Pottery during the 1970s. She informed me:

"Jim and Naomi Nelson set up the pottery - not sure exactly when - (maybe early 60s).

Jim was the potter - he died a few years ago. He was from Scotland.

Naomi is still alive (as far as I know) and lives in Hanmer Springs. She is from England.

Hanmer pottery was biscuit fired and then dipped in white glaze, dried and hand decorated and fired again - I can't remember how high the temperature, but seem to recall it was the high-end of earthenware.

Jim made up his own colours - which, at the time were very distinctive - blues, greens etc.

Pottery was glazed (white) and when dried, decorated - mainly variations on a leaf pattern.

All were thrown on a wheel - and dried leather hard and turned. Jim made own tools for turning etc and also designed wheel so we could stand up and throw - much easier on the back.

We would make batches - normally about 50 at a time - and throw to a gauge - so same size and shape.

The Hanmer Potter mark is a triangle with H in the centre.

Over the years many people were employed.

Pottery was mainly sold in Hanmer Springs from the shop (to the back of the a-frame) but also outlets in New Brighton pharmacy/chemist (Peter Dunbar I think) and for a short while (when Rob Muldoon was encouraging exports) to Australia.

This bowl belongs to Hazel Ashton and is from the early period of Hanmer's production: 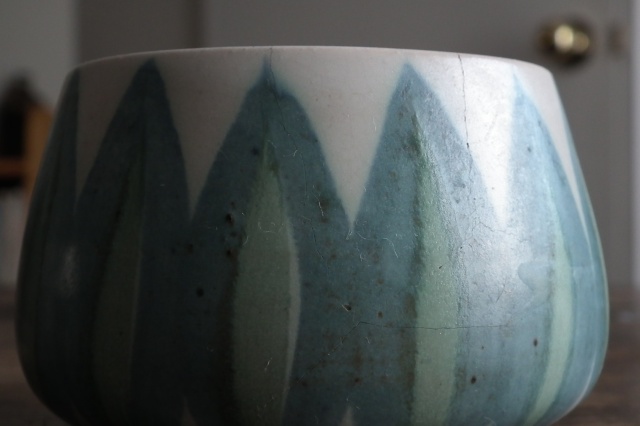 It has this mark: 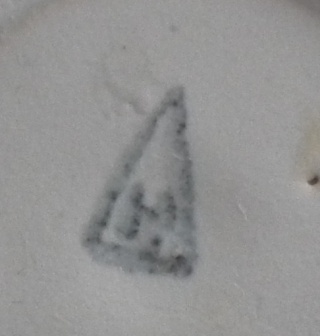 Other people known to have worked at Hanmer Pottery Val Hunt, Pat Gaze and Stephen Carter.

If anyone knows of others or of other sources of info about this pottery please post it here.

i am a collector of hanmer and have about 50 pieces. it was mostly made for domestic use, but jim nelson made the occasional studio piece. his personal mark was an 'N' within the triangle. stephen carter is in nelson and i think pat gaze is somewhere in auckland.
val hunt worked there. we used to go to charlston and dig clay, put it on the rail to culverden and then pick it up in jim's combi van. bitten alive by sandflies, but we survived. val died in england some time ago.

Some great history in your post osammyo!
We have been trying to find out a bit about Hanmer lately, so I will move your post over to add to the other info from Hazel.

yes it has been an interesting place.
jim nelson started in the late 50's. he mostly concentrated on domestic ware as i have said.
he was very proud and independent. he shunned publicity and refused to take part in interviews which would put him in nz pottery publications.

hence, his deliberate low profile resulted in 2 things:-
1. he could concentrate on his business of making a living
2. his pottery is not so well known as those who got themselves a 'public profile'

as a previous post said, he was extremely quality conscious, and had no hesitation in destroying what he called 'seconds'.
the amount of studio stuff is rare.

hanmer is attractive, has variety of colour and interesting shape, is rare and good to collect.
i keep adding to mine

sorry, i was in error

just looked at a piece i have which was done specially by the potter, jim nelson.

it is marked with a capital 'N' . but there is no triangle.

by the way, i think the triangle represented the 'a frame' , the shape of the house.

Thanks for adding your info osammyo, as it all helps to paint the Hanmer picture.
It would be great to see a photo of the N mark one day if possible.
I guess that the glazing would be similar to the other work .... would that be right?

i have photos in 'my pictures' and would like to post here. they are also in 'picasa'.
please guide me through the procedure to upload.

Ev's description of how to load photos is here: http://newzealandpottery.forumotion.net/t225-this-is-how-it-s-done-good-luck-d

It seems that it doesn't always work the first time though. She should be around later today if you hit any snags.

i have sent pics to your email via my picasa

hope you get them ok

Ev - our chief photo-wrangler - will post the photos once she's settled down to earth after her Wellington City Gallery experience. 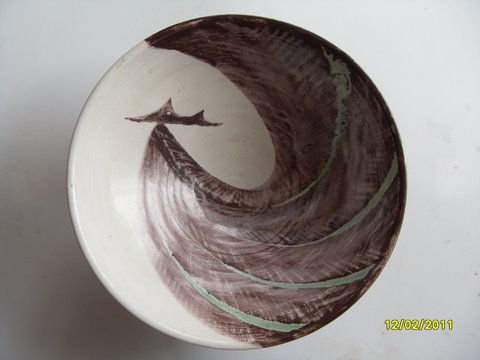 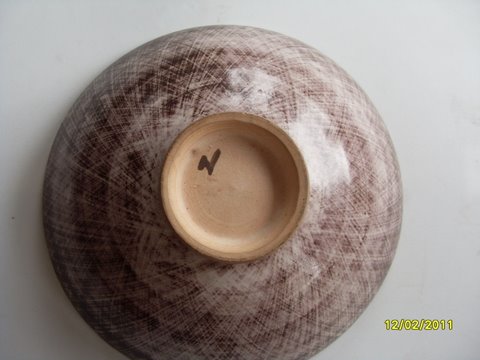 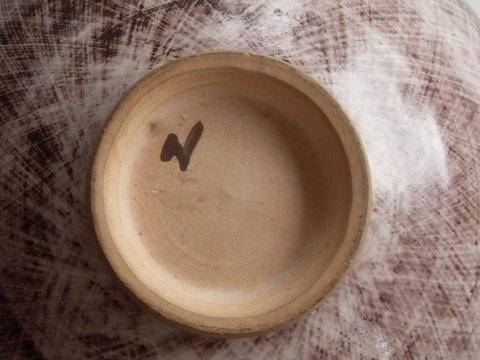 Today I met with Theo Van Ede who'd helped Jim and Naomi Nelson build Hanmer Pottery up from the beginning. 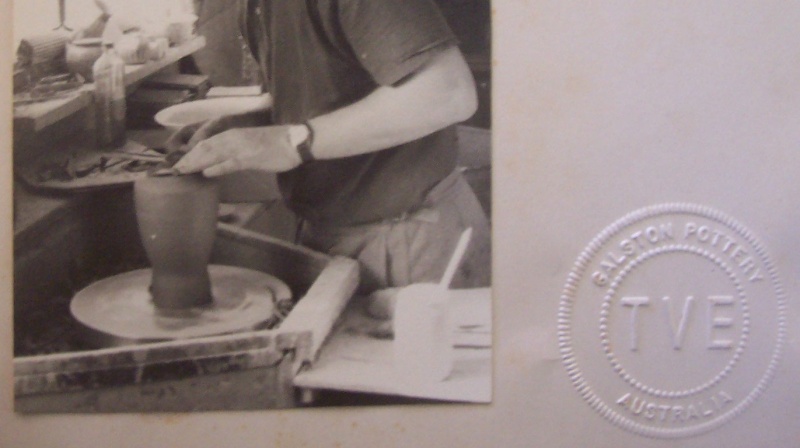 This is part of a photo of Jim Nelson inside a copy of Bernard Leach's A Potter in Japan. The inscription is dated 24th April 1961. The Pottery had been established in the previous year - 1960. Jim is using a stand-up wheel of his own construction.

This large lampbase is typical of Hanmer pottery other than its size: (its huge) 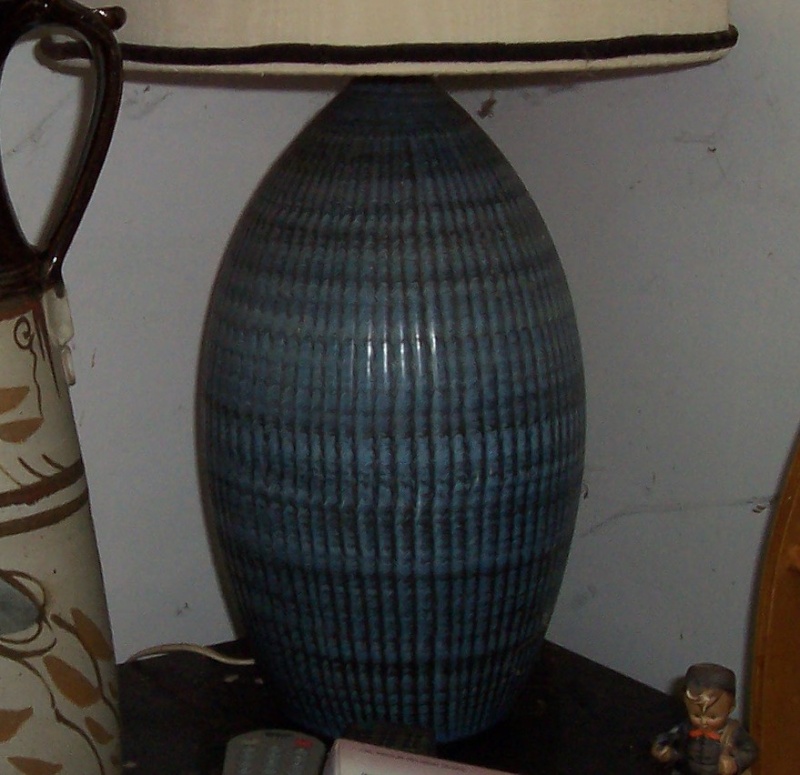 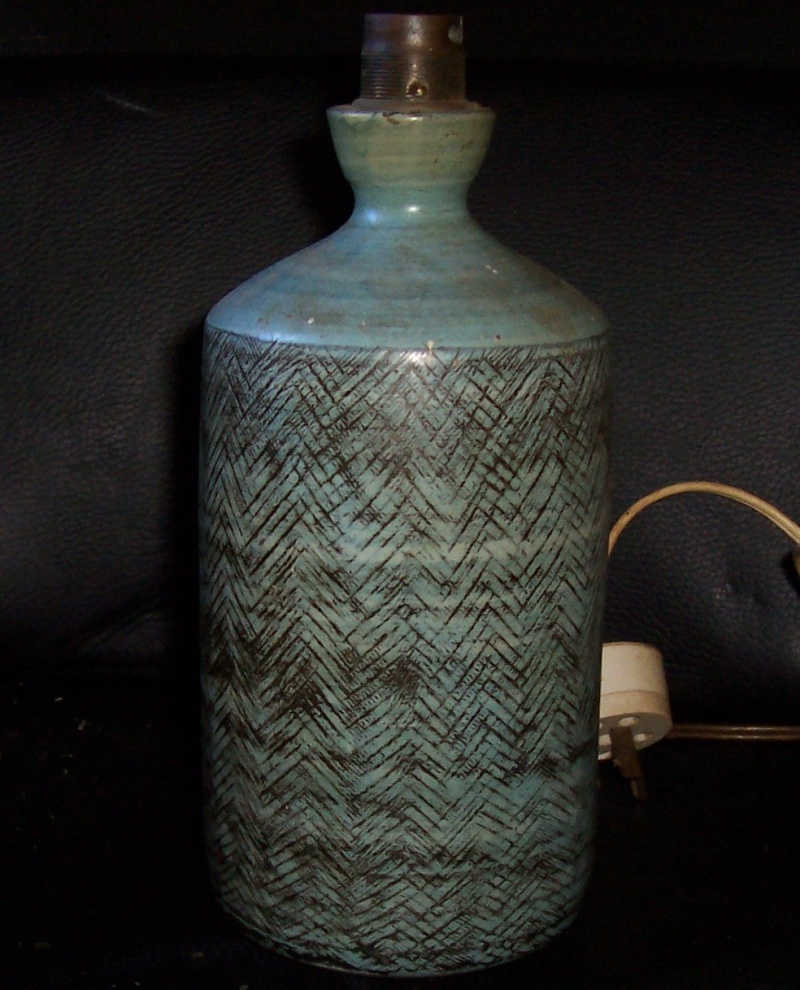 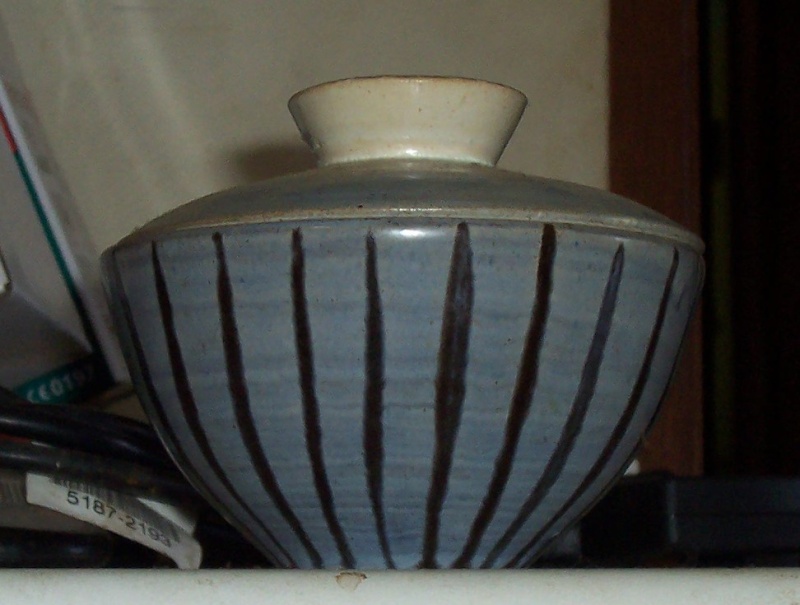 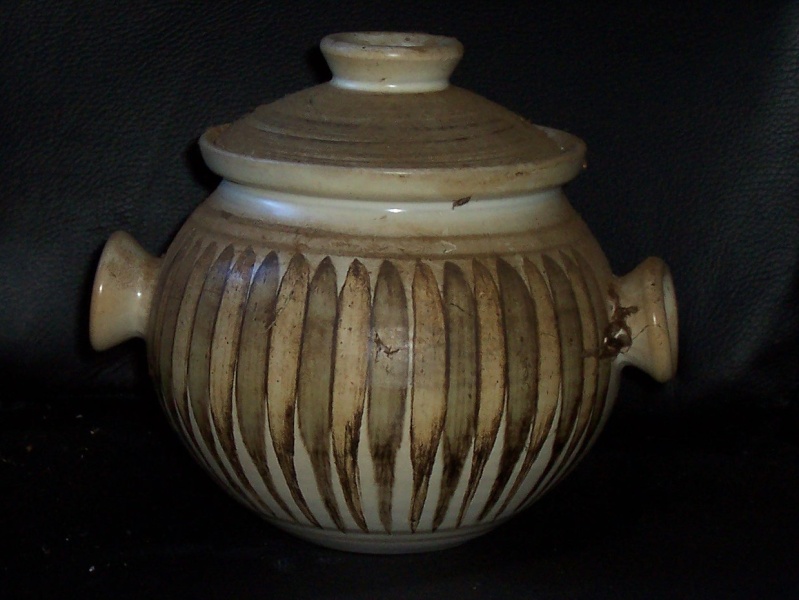 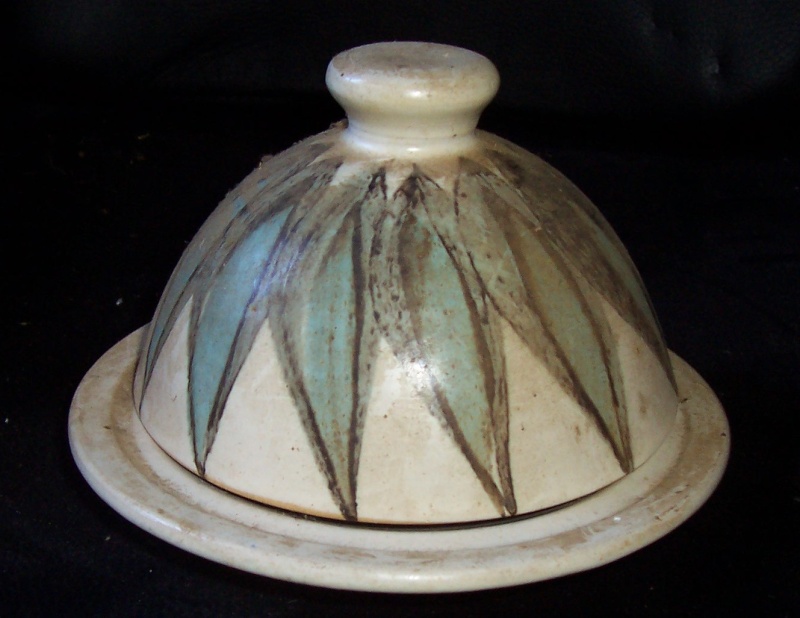 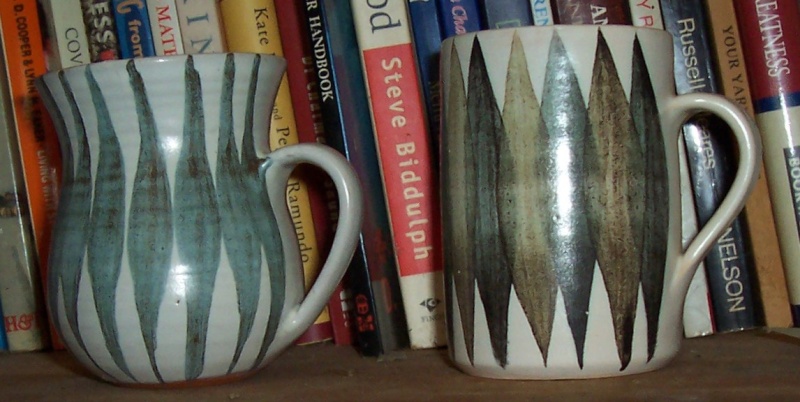 Great work Tony!
I'm interested to know what marks are on the two lamp bases .... Hanmer or Jim Nelson's ....?
Did you take a look? Wonderful pieces of pottery! 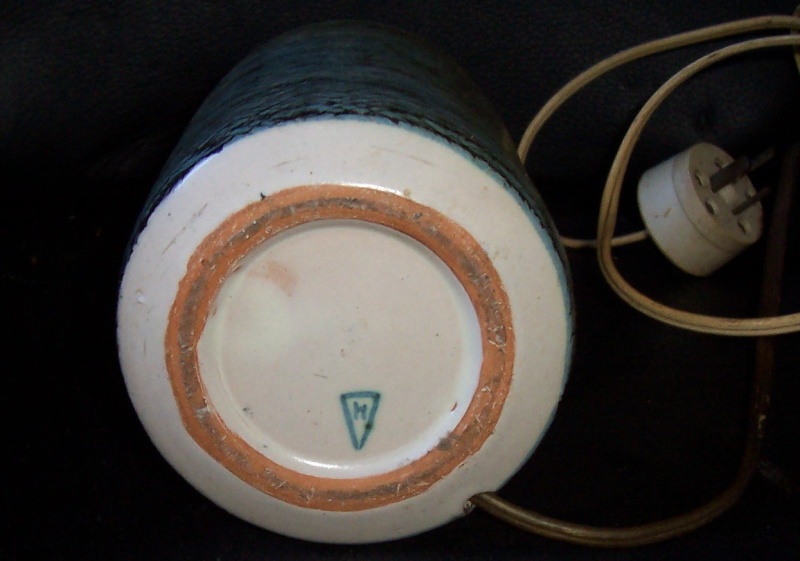 This is one of the transparencies from a set Jim Nelson gave Theo - I'll get the background on them from Theo and Richard Newton and add it here as it arrives. 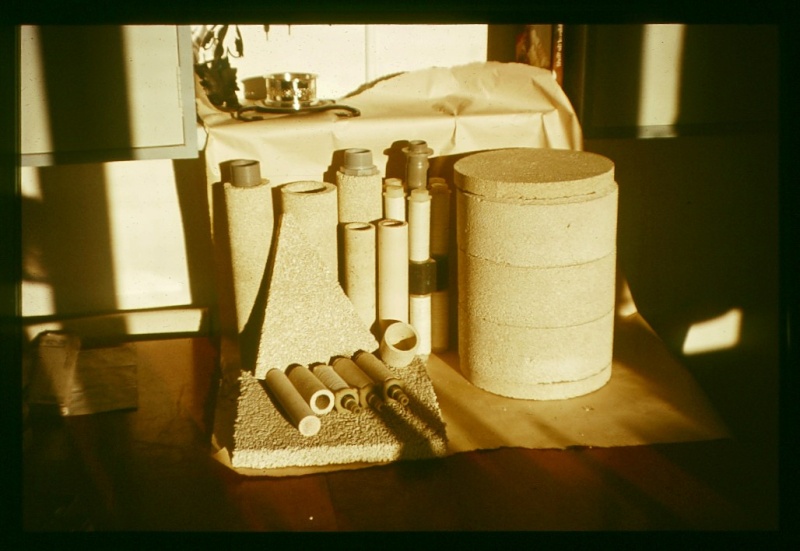