This Is A Crown Lynn Copy Of A Crown Devon Dog, Itself A Copy Of Other Bonzos' - Mostly Sold Just As A Bonzo, but Also Sold As A Bookend 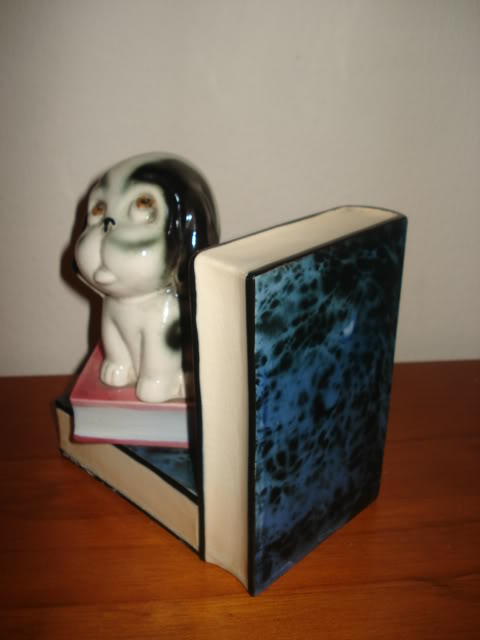 I'm sure that I saw one of these bookends listed on TradeMe recently .....?
Does it have any backstamps or markings emmitt?

Hi, No, That Was The One I Listed, I Saw CrownLynn Selling A Pair On The Collectiques Site As Crown Lynn When It First Started, & Is Where I Saw Them First

Interesting emmitt - have they turned up in any of the records at Auckland Museum or in the Portage Collection?

The blue and black on the book cover is rather fascinating .....
Heather has the Crown Lynn/Crown Devon dogs, but I can only find a pic in the Un-numbered Gallery.
Just wish there was a number on the base !

I have quite a few of the dogs, I bought them when it was discussed on the Collectiques sight by a collector in Timaru that they were Crown Lynn.

That has been the only time I have ever heard them said to be Crown Lynn so the jury is out for me.

Have you seen that marbled glaze effect on any marked Crown Lynn pieces in your travels? Has John, or Manos, or Jim, or Ev, or anyone credible?

Hi The Bonzo Is A Kosher CL Dog - Whether It Was Added To A Bookend, I'm Not Sure, But if An Australian Manufacturer Had Access To CL Animals, There Would Be More Recognisable Ones Out There
I'm Not A Crown Lynn Expert/Authority = But Neither Are Those Museums, I Wish they Were
I Always Saw This As Just A Small Run By Crown Lynn To See If There English Style Stuff Would Sell & It Didn't
But That Is Just My Opinion/Theory/Belief

You Are Welcome To Help The Discussion, Thanks

Sorry - I didn't mean that an Australian pottery stuck Crown Lynn figurines on to Japanese bookend bases. Diana or one of the Sydney potteries applied their own figurines to bases of Japanese manufacture. The animals are recognisable Australian products but the bases have Japanese backstamps.

Crown Lynn may have done something similar. The mottled or marbled glaze is atypical of Crown Lynn production pieces.

Most of the Crown Lynn records at the Auckland Museum are copies of records recovered from the main Crown Lynn site in New Lynn. The museum didn't create them. The originals are now in the Portage Ceramic Trust collection. If the bookends were created and production ended before the fire that wiped out most records then there'll be no company record of their production.

Not all of the animals Crown Lynn produced are included in the 1 to 881 1948-1964 shape series documented by Richard Quinn. This list uses Richard's own primitive drawings of pieces from his own collection (now the Portage Collection) and didn't include shapes that he was unable to assign numbers to.

Having worked for the Manawatu Museum, the National Art Gallery and the National Museum of New Zealand I'm aware that curators' interpretations are opinions but unlike for example the ravings of TradeMe CrownLynn experts they usually have some academic rigour to them.

I don't think it's possible to create a single undisputed history of everything Crown Lynn but primary sources are a good beginning point.

Until there is some hard evidence that the bookend was made by Crown Lynn, it can only be classed as possibly Crown Lynn. Backstamps, numbers or records are the best means of identification. The clay, the base, the weight, the feel and the glazes are good pointers, but that's all. I have learnt that self professed experts have no credibility without any back up evidence.
I am with Heather on the Crown Devon look alike dogs ..... the jury is still out.

Your so right Eve we need hard facts so many of the books out there are wrong. The last CL book a good example.

You allude to many things ... perhaps you could introduce yourself and give us some idea of your NZPottery background. Your posts are intriguing, but I want to know more

So in what ways do you see the latest Crown Lynn book as wrong?
My thoughts are that every book has errors/mistakes and the next book to be written accounts for these

I think there has been a tendency in writing about Crown Lynn to rely heavily on oral history and memories - bit notoriously unreliable as source material.

Jack Diamond set the ball rolling and everyone that has followed in his huge footprints had both included earlier doubtful material and added more. The internet has accelerated this process so there are now "experts" online who spout absolute drivel and then criticise on a personal level the people who point out their errors.

We established this forum to provide an evidence-based alternative to the existing profit-driven discussion groups at the time. One of the published authors I've had contact with has said that after you receive the first copies from the publisher the really interesting material turns up.

The best way to counter published errors is to publish ammendments, giving the primary and secondary sources that support what you're saying. Internet assertions and TardeMe listings can't be regarded as reliable sources. Back when I worked in retail (

) there was a Consumers' Union publication "It's Your Money They're After". It's a useful reminder that behind dealers' and rag and bone merchants' claims there's a profit motive - if you believe what they claim their stock is worth more. The price allegedly attained for the Royal Visit cup with the "Shufflebotham" name on it which failed to reach reserve at auction is a blatantly obvious example of this - absurd if it wasn't so tragic. Market ethics at play.

simple email james and ask what the story is.

James? Would that be a first or last name signal red????

Alternatively signalred if there's something you would like to contribute here you could post the actual information - this is a members based site and all contributions are greatly appreciated - at the moment Ev is doing all the heavy lifting.

I'm not interested in the money side of the secondary market in commericial or studio ceramics but am very interested in information and the resources that back it up.

Well now it appears that Crown Lynn made a Bonzo jug going by the backstamp on this auction and it's from a very early timeframe. Heather has a few of these Bonzo ornamental dogs and believes that they were made by Crown Devon, but I can't find a photo of any of them now.

Hes very cute aye, I think he is lovely but Im not sure its Bonzo he usually stands like a human & is a strung out cynical 1920s dog. He predates Mickey Mouse, bit early for CL me thinks..but then CL made Mickey Mouse, why not Bonzo Too!

These are my Bonzo Salt nPepper  made in Japan. 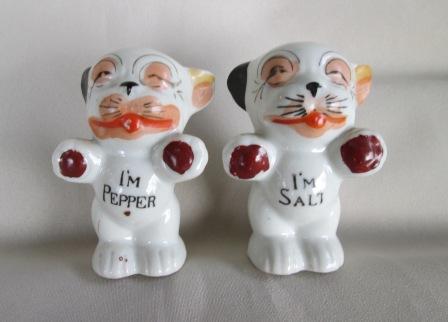 Do you mean this Bonzo jug one Kat? I can't even find a pic on google, but hopefully I have one in my files ... and I do and Bonzo's mouth is like a triangle and Santa's has some teeth. Similar by different.

Yes thats the one, wow Id forgotten how much it sold for!