I have a jug with Mc Alpine on both sides and I also have a water filter? if that is what it is called. With these I also have 3 glass fridge containers rather like glass bricks but the top lifts off. Two are square, one is oblong. I'd like to know more about them. I know the jugs are not uncommon but the other things are probably rare. Photo coming.

what colour is your jug? Some of them go for very silly money! A blue one went for several thousand on TradeMe the other week.

Ev hasn't posted the photo yet but they are white. There is a blue jug on T Me today at $2900!!!!!! and it's slightly damaged. I've seen white jugs go for about $3-400 but it's the filter water dispenser thing I'd like to know more about.
Just in case you're interested - I don't intend to sell them just yet!

The one I saw went for just over $3000! Also with a couple of nibbles.

Here are the photos that Glenys sent - 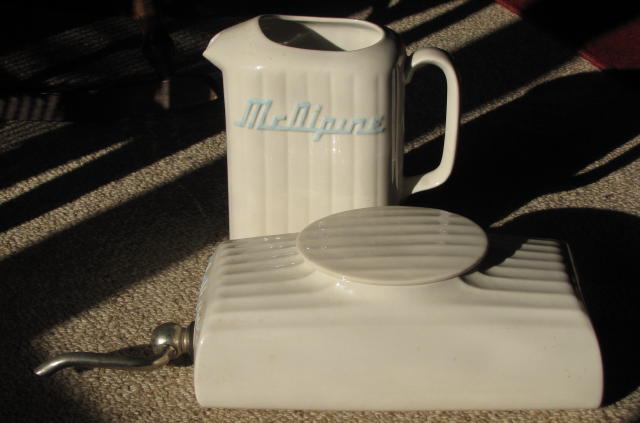 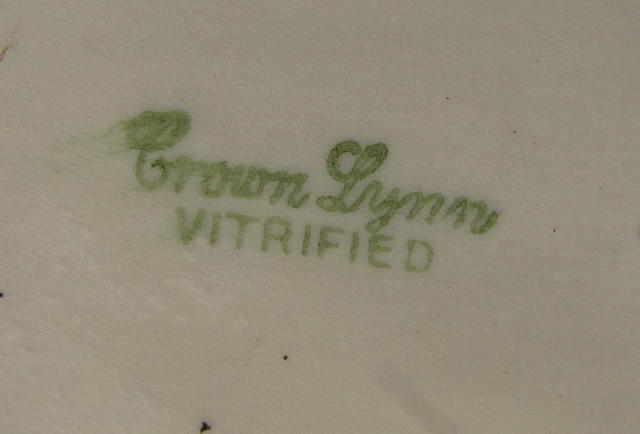 Which piece is the backstamp from Glenys?

That's the first McAlpine filter photo we have seen on here

All my collection is packed up while we live in a bus! Fortunately I photographed it as I packed it. I have no idea which piece the backstamp comes from. However I am quite convinced it is CL and came with a fridge.

I was just looking at a McAlpine jug on trademe and when I checked the back stamp I noticed it was a vitrified stamp:

This prompted me to check my own and sure enough it too had the same. It had never occurred to me before why it was not crazed but now I know. I see too that the frig tank above also has a vitrified mark.

I may be confusing McAlpine jugs and tankard jugs here as the latter were both earthenware and vitrified and I have seen some of THEM crazed, indicating that they are earthenware examples.

Question is, were all McAlpines vitrified?

Do they have a shape number?