Yesterday at 14:10 by Jeremy Ashford

Always enjoy trips to the Museum ....
Today I needed to check out a 1978 catalogue for 'An Introduction to New Zealand Commercial Ceramics' Exhibition by Stuart Park that was held at the Otago Museum.
Heh I had seen this booklet on Trademe a few years ago, as I recognised the Crown Lynn NZR cup on the cover and it was rather popular, but out of my trading comfort zone.

This Exhibition had samples from mostly South Island Potteries -
these had some interesting history about each of the Potteries in the catalogue.

The majority of the pieces in the Exhibition were Crown Lynn however, taking the viewpoint of the different backstamps that they used over time.  Luckily these backstamps were also printed in the catalogue and I scribbled them down for future reference.
All sorts of bits of info that I couldn't help noting as well ....
e.g. The Soup for One mugs were made for a Maggi Soup promotion in 1976...
The Kelston Ceramics Wombles were retailed in 1976 by Woolworths ....

There was also mentioned that in 1964 the Trademarks for Caribbean Ware, Capri and South Pacific were registered.
Kelston was registered as a Crown Lynn brand name in April 1962.
They showed this backstamp 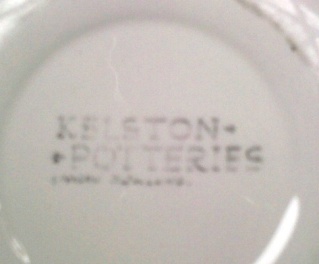 and continued to say that it was used from 1962 onwards (and earlier possibly early 1950's ..)
A very interesting addition at the end of the Crown Lynn section was CL114 a jug with the incised brand Titian. Bought new in Dunedin recently.  And it goes on to say 'Titian is another current pseudonym of Crown Lynn, though details of it's history are not currently known.  It does not seem to have been widely distributed in the South Island as few examples have been seen here.'

I hope there are others out there who are as interested as I am in this sort of info, as that's why I document findings, hoping that I'm not the only pottery geek in NZ ....

Ev you are doing us a huge service by documenting your findings on this site for all to see. Please don't stop!

I agree without reservation and I just love the sound of Ev the Crown Lynn Geek .

Thanks for your support you two

I should have mentioned the Made In NZ stamp in a circle but without the surrounding circle around it ..... they said this was from the early 1940's.
Does anyone have this backstamp .... as I don't think that I've seen this one.
Not a trickle mentioned anywhere I must add.....

My word if I ever see this catalogue on TM again, I will be after it no matter how much it goes for!

Re: Went to the Auckland Museum Library today

Did have the Made in NZ outside a circle on an old Mixing Bowl which I sold last year but am unable to find the photo Boo Hoo Hoo!!! same as p158 Monk 4 down RH Col.
is that the style you mean?

Make sure your backups work, I have learnt my lesson the hard way.

Not quite like that one Jonno ...
Like the last one in the middle column on page 158, but without the circle.
I have a few backup connections now, so feel safe for now.

It was with great anticipation that I was looking forward to checking out this piece of history. Would there be pieces listed that we were unaware of?
What about those re-used numbers .... would they be included?
Rather exciting to say the least!!

The shapes were recorded in much the same way as modeller Tam Mitchell's books that were titled Crown Lynn Shape Guide. [MS 2009/5]

No. Description. Dim. Marks/Backstamps. Made For . First Date. 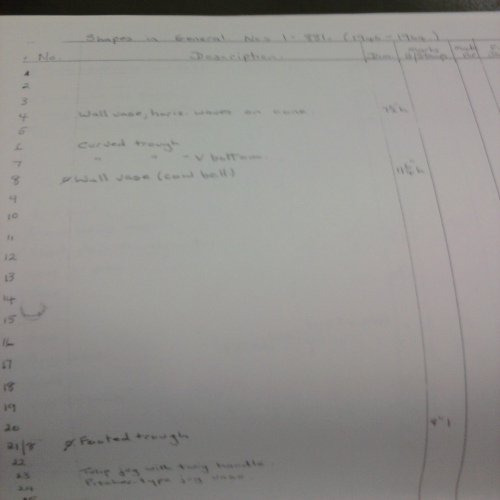 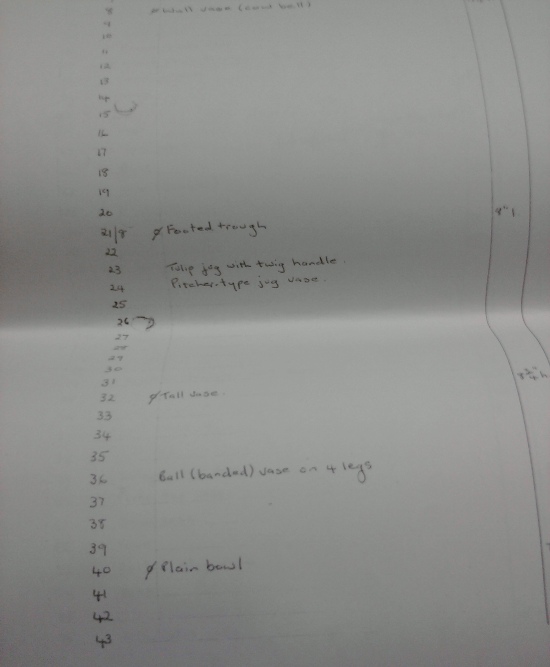 I decided to note down all of the numbers listed and any descriptions that stood out. There were no diagrams to be seen.
As I had my laptop with me I compared our Shapes Gallery to the shapes listed as I went along.
It didn't take long for me to realise that every description sounded the same as Tam Mitchell's, but I carried on regardless and was pleased to see that our Shapes Gallery covered many more shapes than Richard recorded.
I particularly noted that there were no re-used numbers anywhere and that there was nothing recorded that I hadn't come across before.
There was also a page of Wharetana numbers and descriptions that seemed very familiar.
When I got to the last page I was rather relieved to find this -

"Notes on No's 1-881 series (1946 - 1964)
1. Dates are assigned on basis of pottery records: generally either from the Modeller's daybook or the "Shapes and No's Book" kept by the modellers. A few are from Crown Lynn catalogues.
2. "Made For" assignations from same archival sources.
3. The entries are as described by the modellers, the only alteration are to amend obvious spelling errors."