» Is this Crown Lynn. or Possibly Temuka?

» Is this the mark of Craig Hall? It appears to be. 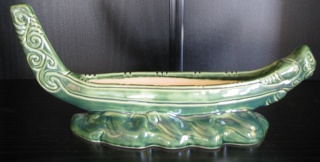 First one I have seen of this colour. I own a brown (marked), black (marked) and white (unmarked). Does this have any markings? Oh and while i'm here any crazing? any chance of a pic of the other side?

I am sure Ev will take some more photos to show you hers, she is understandably very proud of it.

Maybe sometime we can see pics on here of your collection? How amazing to have the different colours!

Hi peters, the waka is unglazed on the inside - there is no crazing.
Perhaps Hemara made this one for himself?
He gave me this beautiful piece by the way.
There was another green one inside his home.... his wife called it her waka.
Here is a pic of the base .... 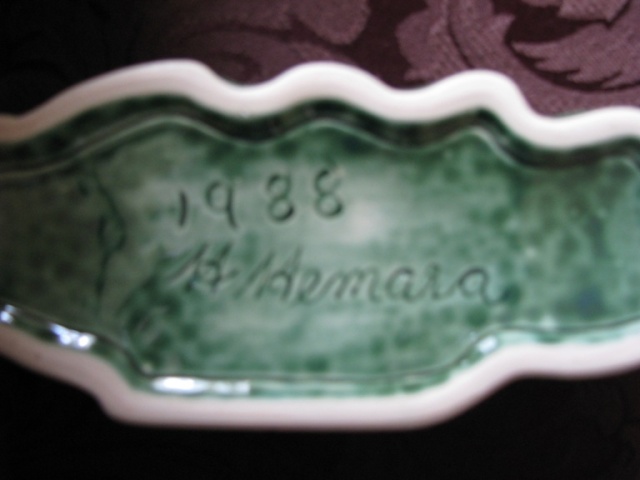 Thats cleared things up for me.
Very nice indeed.

Here is a photo of the other side peters...

Do you know if Titian were still operating in 1988 peters?

Titian was certainly not going then and I beleive that after CL took over around 67-68 at the Henderson Factory. I also think that Hemara worked for Cam Brown at some point but not having met him don't know exact dates. He may have kept a mould or did it whilst at CL.

If you get the opertunity to ask it would be interesting to know whether he has a hand in the Waka design.

From memory and notes Hemara said that he has been potting for 53 years.
He started work at 14 for Crown Lynn and worked there for about 10 years.
He also said that he worked for Cam Brown at Titian for around 30 years .....
but I think this includes Orzels.
Vic Lawson was the modeller for the Titian waka he said.
Hemara has a Titian waka mould - he showed it to me.... it is made up of several pieces.
Hemara said that he has made moulds for around 100 potteries and potters.
He said that he made moulds for Kermiko, Stewart Potteries, Terra Ceramics, La Ville, for Shelia a Hobby ceramist, for Rose a Hobby ceramist and heaps of others.

My turn to ask a question now

So is my waka - Titian? or Orzel? or a Homer made by Hemara?

I would say that it is certainly not Titian and unlikely to be Orzel. i would say a homer. I woner how many are out there. It is a fine example with crisp detailing.

Thanks for clearing that up for us.....
I will now move this topic into the Hemara Hemara topic.