This was at our local Onerahi market. It came with a small beaker so I am assuming it is a wine thingie. 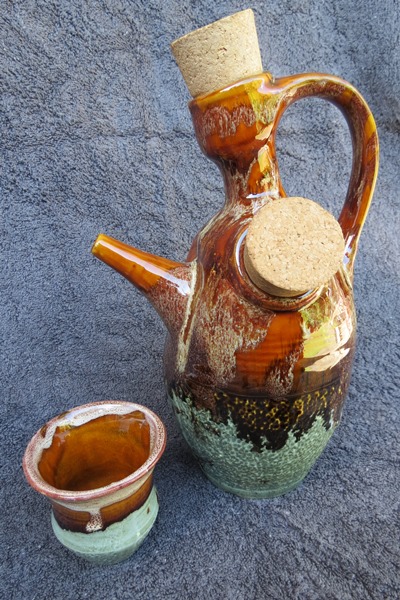 Over the next wee while I found a kitchen jar and then a rather nice jug with the same interesting knobbly green glaze. 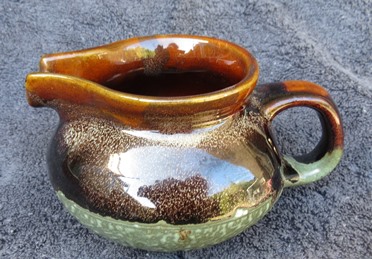 I was wondering who made this stuff - until I found a mug at our new Habitat charity shop - paid an extortionate $7 because it had the same glaze PLUS a name on the base. I quite like this particular finish and will look out for it now. It's better made than some Orzel. 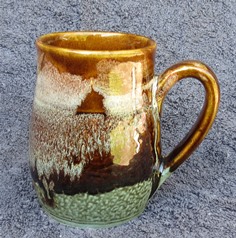 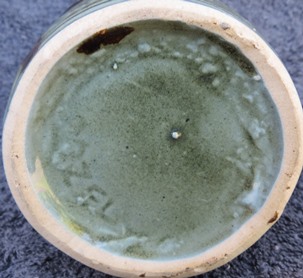 Yes it's a wine carafe and a goblet.  The Browns had a cannister set in this glaze .... Because of that green glaze Bev said.  I pointed the carafe out to Jeremy at the fair last week.

But that one had an Aquila sticker.

I have the dealer's card somewhere if someone wants to pay retail for one of these.
It's a monster, but I agree the glaze is amazing.

Yes Jeremy Aquila were orzels top lines. I remember these from the 1970's.

I knew that much. And I've seen some of Manos' lovely pieces on the forum.

Did even pieces stickered Aquila pieces still have an Orzel mark on the base?

Or was it the shapes, rather than the glazes, that made a piece Aquila?
(In which case Val's wine thingy could be an Aquila piece too,
even though the mug in the same glaze is marked Orzel)

I have mentioned elsewhere an Aquila oil/vinegar jug at the Hikurangi Bakery.
I really need to get a picture as I can't remember the glaze,
and so don't know how it compares to Val's pieces.
And other Orzel.

Still can't get my head around the wine thingy!

The wine thingy has a European flavour look ..... heheeeeee
If you search Aquila posts like I did you will find mostly figurines and animals and statuesque vases. None of these have Orzel on them, most have an Aquila sticker or the base is stamped Aquila. I can't answer all of your questions, but the Brown family could I'm sure. 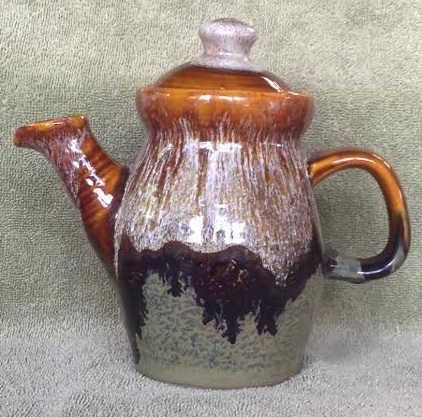 I think Maryr should check the inside of her 'wine thingy'. As it has 2 stoppers I wonder if it is divided inside and is in fact a vinegar and oil mixer where the two combine as they come out the spout. I had a glass one in the 70's and Jeremy mentions one at Hikurangi. Now that would be something!

Glenys,
my oblique stroke was intended to indicate "or". The one at Hikurangi s just a jug about the size of the 112. I thought it had the same glaze is all.
On more recent trips to Hikurangi I see the Aquila sticker has disappeared and I'm not even sure it's the same jug now. Memory, huh!

Good thought Glenys. I checked my wine thingy and it is a single chamber. Why the two corks I have no idea.
Nice teapot Jeremy. We'll spotted. They must have made a lot of this stuff

There is a duplicate of the above teapot for sale on trademe now:
http://www.trademe.co.nz/Browse/Listing.aspx?id=678366649
The glaze looks similar but the application is really nasty.
What were the folk at Orzel thinking?
By comparison my Frankenstein set looks pretty!
( http://newzealandpottery.forumotion.net/t4415-holiday-puzzle-frankenstein-coffee-set#15457 )

Shudders as there are so many features that don't appeal to me on that pot.
Mostly the spout is all wrong and what is with glazing the lid like that huh?
Hahaa I don't even like the lid full stop!! The handle is ok I guess and the body is passable but, No Thank you.

My photos of the teapot/coffee pot all came out rubbish as the glaze on the real thing looks similar to that on the wine thing. (I have changed the photo now.) I agree with Maryr on the glaze: I like it. When I saw the wine thing at the market I edged away from it without exploring it and when I saw it here I regretted that move. Maryr has given me a two finger mug in the same and I think it's great. Ugly it may be but at least the pot in my photo was cheap.

The object on trademe has lost any redeeming feature with it's unpleasant glaze application. Likewise another "wine thing" on trademe has a glaze I am repelled by.
http://www.trademe.co.nz/Browse/Listing.aspx?id=678765686
I actually like the same green over yellow glaze as executed on my beakers and appreciate that Orzel seemed to want to make a trademark of the dribble but on this second wine thing the dribble totally detracts.

I will continue to pursue my exploration of Orzel's extremes, and in the process continue to collect objects that are not pretty but these two examples currently on trademe (pot and wine thing) do not tempt at all. I still think the Frankenstein set deserves further exploration though.

Because of the close connection to Crown Lynn I wonder if we should start an Orzell gallery. Most of what I see in op shops I don't like but could photograph for the record.

I tried a sub Gallery for Orzel and Aquila once before, but got very confused as to what went where. For now I guess they can go into the Titian Gallery .....? What do you reckon Glenys?

Ev this is great to have the orzel entries in one place. Brilliant.

This is on the small side - dinner for two maybe, 13 cm high to top of knob. It has the same flat dry base, unmarked. 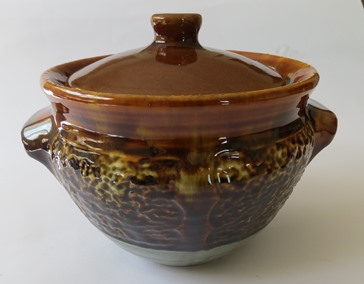 Thanks Maryr that's a lovely photo

Yes it's easier to find Orzel when it's all together and it looks like there will have to be an Orzel Gallery too as I've picked up all of the Orzel pics to post in the Gallery and it's going to blow the Titian gallery up kaboom*!
It will take time to load all of the photos, but will be worth it to be able to see the range that Orzel made all together.
At least Adelaar is always marked as such! At this stage it can stay in the Titian Gallery, but this may have to change if too much is posted.
Aquila is hard to determine unless it is marked or has a sticker, but can remain in with the classy Titian.

Maryr,
It looks as though there is a pattern underneath the glaze of this small casserole.
Is it the same pattern as under the glaze of the two-finger mug?

Apart from that apparent pattern it seems to be the same shape as one of Thelma's at
http://newzealandpottery.forumotion.net/t1371-nz-pottery-from-the-70s-is-made-by-orzel#3625

I think you are right Jeremy about the casserole not being in the knobbly green glaze. Thanks as I assumed it was and I will take away the glaze reference in the gallery.

I Understand the problem!!! Maybe the gallery could be 'Titian and CL associates'?
What do the Orzel/Aquila/Adelaar/etc people think?

Glenys wrote:I Understand the problem!!! Maybe the gallery could be 'Titian and CL associates'?
What do the Orzel/Aquila/Adelaar/etc people think?

Ev,
I haven't looked at enough pieces of knobbly green to know but it looks to me that the "knobbly" might be a vermiculation or sgraffito or somesuch pattern in the body rather than the glaze. Hon-john's two finger mug and the one Val gave me both have the same combination of glaze colours over a patterned body. I have seen the two-fingers in a plain glaze somewhere but cannot locate it at the moment.
A quick review of the green knobbly pieces shows they have a banded top half and knobbly lower half.

By way of an interim assessment I think these Orzel pieces need to be looked at as having three variables.
1. a SHAPE which may have different...
2. SURFACE TREATMENTs or PATTERNs and also a range of different...
3 GLAZEs

Thus Maryr's casserole has the same shape as Thelma's but different treatment AND glaze.

On the matter of how to approach distinguishing what goes where in the gallery, it seems to me there is crossover between Titian and Crown Lynn that precedes CL's takeover of Titian so there are always going to be some grey areas there.

More easily distinguishable is the Browns' post 1971 production as Orzel, Adelaar and Aquila, and it would be respectful of the Browns' wish at the time to dissociate themselves from Crown Lynn to keep all three trading names entirely separate from Crown Lynn and Titian. The only complication there being where the have reused shapes they previously produced as Titian, which I think is minimal. 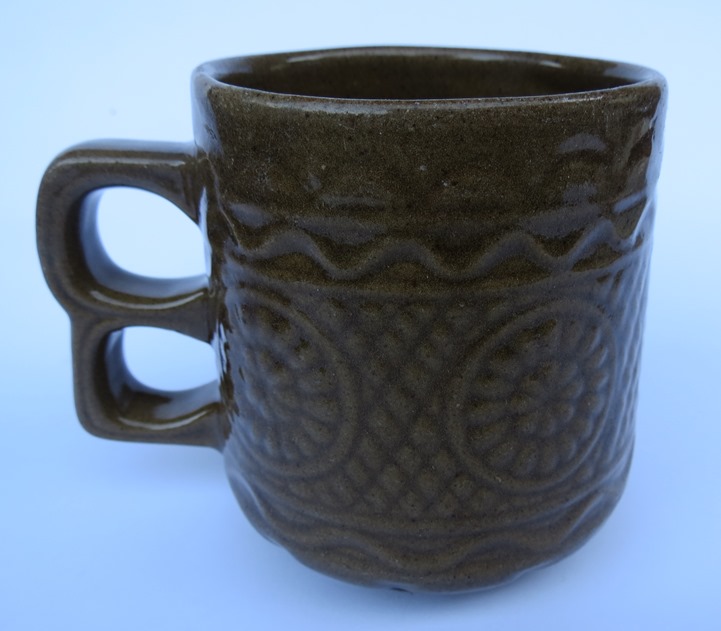 photo by maryr
It gives a much cleaner image of the pattern beneath and would probably be more useful in the gallery than the green-glazed one.

I have a two fingered mug as well and I think this photo of mine is perfect for the gallery as it shows the pattern clearly. I used Maryr's description of the knobbly green to try to keep the pieces together in the gallery to show the range made. I realise that it is the texture on the pots that create the knobbly look. The circular pattern on this mug is used quite a lot too it seems, so I may try to hook them up with other pieces. Although as you have pointed out the pattern often gets lost in the heavy glaze. 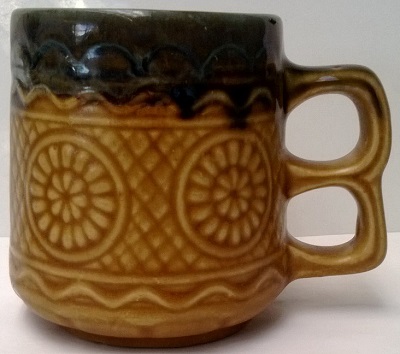