a selection of Clay Craft glazes

a selection of Clay Craft glazes

I have quite a selection of glazes on Clay Craft products now... 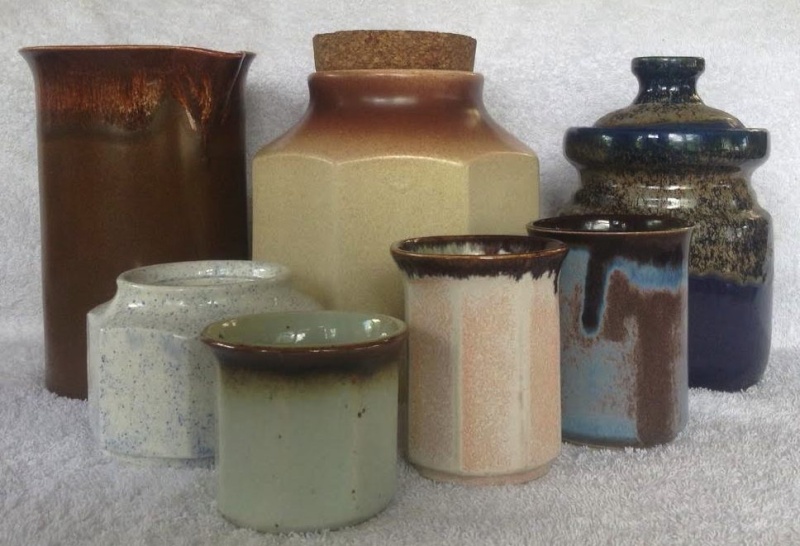 As with Orzel's brown glaze with frosting, there is a lot of variation in the white/brown mix on the top glaze of Clay Craft's brown.
I have not included variations as a different glaze.

I suspect the glaze on a recently ended eBay auction is the brown/cream/splatter glaze of the cup in front but I am not sure.
http://www.ebay.com/itm/Glazed-New-Zealand-Pot-With-Lid-/181263562477

Jim has a jug with yet a different glaze:
http://newzealandpottery.forumotion.net/t4094-cups-stamped-made-in-new-zealand-these-must-be-clay-craft#14946
I'll try and make a better photo some time.

Also not represented here is JanPots' lilac cups:
http://newzealandpottery.forumotion.net/t4094-cups-stamped-made-in-new-zealand-these-must-be-clay-craft#13998
I don't have anything in that glaze.

If you are op-shopping or garage-sale-ing (or t-m-ing) and see unmarked items in these glazes they could very well be Clay Craft.

Once KilnCraft, Traditional New Zealand, and Beach are added the range increases.

The blue canister is marked KilnCraft and has the same glaze as Kat's small jug:
http://newzealandpottery.forumotion.net/t191-clay-craft#13091
I mistakenly included it because Kat's jug shape was also sold as Clay Craft.

I look forward to seeing more.

------------
UPDATE
10/12/13
The glaze on the large biscuit barrel, centre back, is called "Sandstone"
------------
UPDATE
17/2/14
Kat has advised me that the blue speckle on white glaze on the sugar bowl above looks like HOBBY CERAMICS. On closer examination we found that the foot ring is glazed and it has a faint triangle of cone/stilt marks, so yes it probably is a Hobby Ceramics piece from a Clay Craft mould. It DOES have a Clay Craft mark. I have seen other TITIAN, ORZEL and Clay Craft shapes made as Hobby Ceramics pieces. 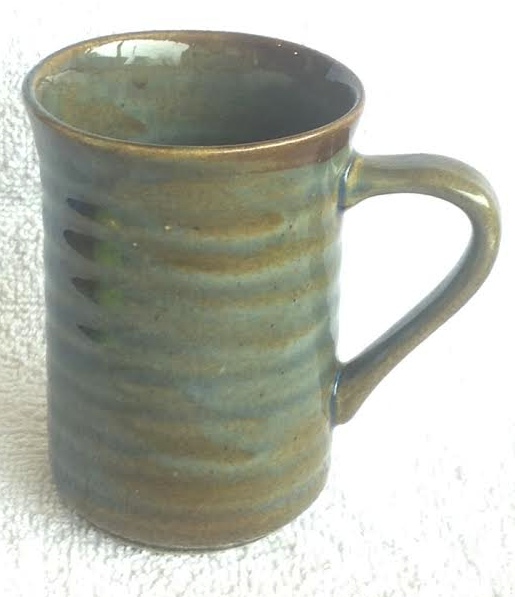 I had to bright out the background to bring up the glaze colours.
It's distinctly different from any of the above. 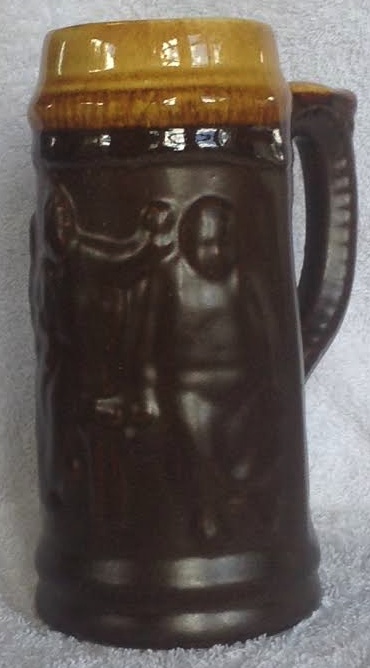 I picked this one up to add to this collection of glazes.
The brown differs from the brown on Clay Craft items.
The yellow has none of the brown of the Clay Craft overglaze.

The tankard was produced in many different glaze sets.

blue on green, blue on blue 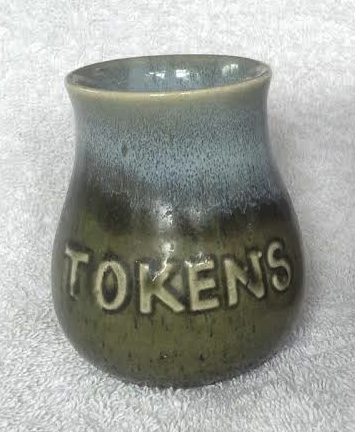 I posted this on Saturday,
( http://newzealandpottery.forumotion.net/t4352-token-jar-clay-craft-etc#15179 )
pretty sure it was Clay Craft but as it is unmarked I felt need for confirmation.

I have that now from the following trademe auction:
http://www.trademe.co.nz/pottery-glass/auction-669829359.htm
so I'm happy to add it to the glazes topic.

For another auction with blue on blue glaze see:
http://www.trademe.co.nz/pottery-glass/auction-672681439.htm 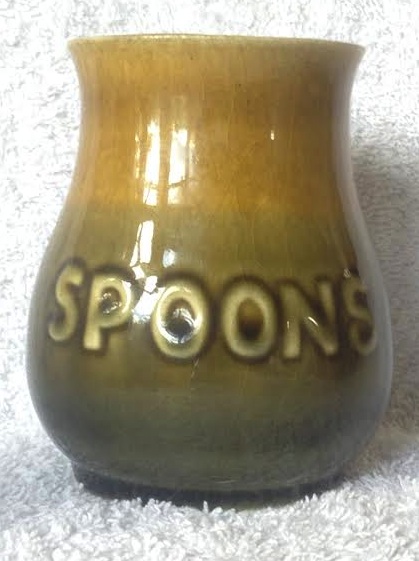 The green is really hard to capture. 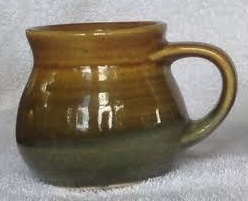 Still had to get that colour!

not Clay Craft after all!

There were two of these at Hospice.
One in Clay Craft brown, and this.
Brown was chipped and this adds a new glaze.
I tried photographing against a different background but lost the yellow.
The colours here are pretty true.

Sorry Jeremy but that gravy jug is made by Orzel.
I remember them from when I would go to the factory in the 1970's.
They come is many glazes too.

Thanks Ev.
Looks as though my bones let me down.
I was looking at the spout earlier this evening thinking Orzel rather than Clay Craft but I couldn't make it work with the Orzel I have seen. Silly really because on other topics today I have been attributing ribbed stuff to Orzel.

I've seen some other pieces like this that did look like Orzel to me, also in the brown glaze. I've generally avoided buying them because they tend to be damaged. Off the top of my head, shape I'm thinking of is a jug/pot/bottle similar to the 112 Manhattan, but with maybe a ribbed body and a similar a tubular handle sticking out the side.

I know it's not a unique feature of Orzel pottery but the cork holes on much of their stuff has a distinctive shape, as on the 112, the oil and vinegar bottles I've posted, and also seen on the pepper and salts I've posted this week.

I'd really appreciate some input on those salt and peppers as they really have me puzzled. ( http://newzealandpottery.forumotion.net/t4377-another-orzel-pepper-and-salt#15297 )

The good news here is I have yet another piece of Orzel. And may get some more. I'll review the other pieces I've been looking at now.

I'll post the above photo on an Orzel topic and change the (sub-)title above. 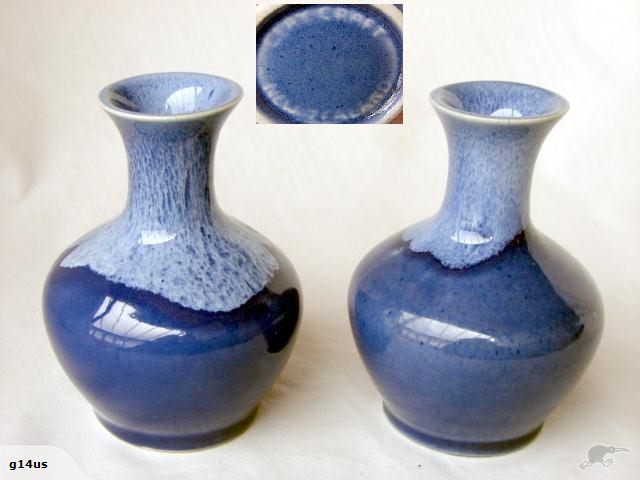 "11cm tall and 8.5cm across at the widest point.
A definite pair but not identical in the lighter blue decoration."

I'm well aware of this debate. I've read it long since.

No spanners. Standard vase shape, as old as history.

I posted for the glaze colours: "Blue on Blue" 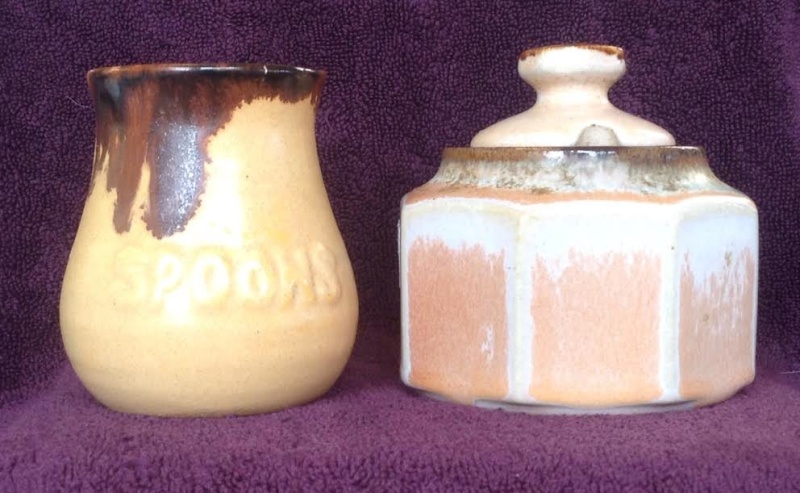 When Adriana was visiting last year she told me the pinky glaze on my octagonal teapot, as seen on a mug in the first picture was (usually) the result of a glazing miscalculation.
I wonder it the sugar bowl here was intended to be the same.