Spotted this at our end of year volunteer function, phone camera photo doesn't do colour justice (and red reflection from my very red top). It is just gorgeous!

ANy idea on how old this would be? 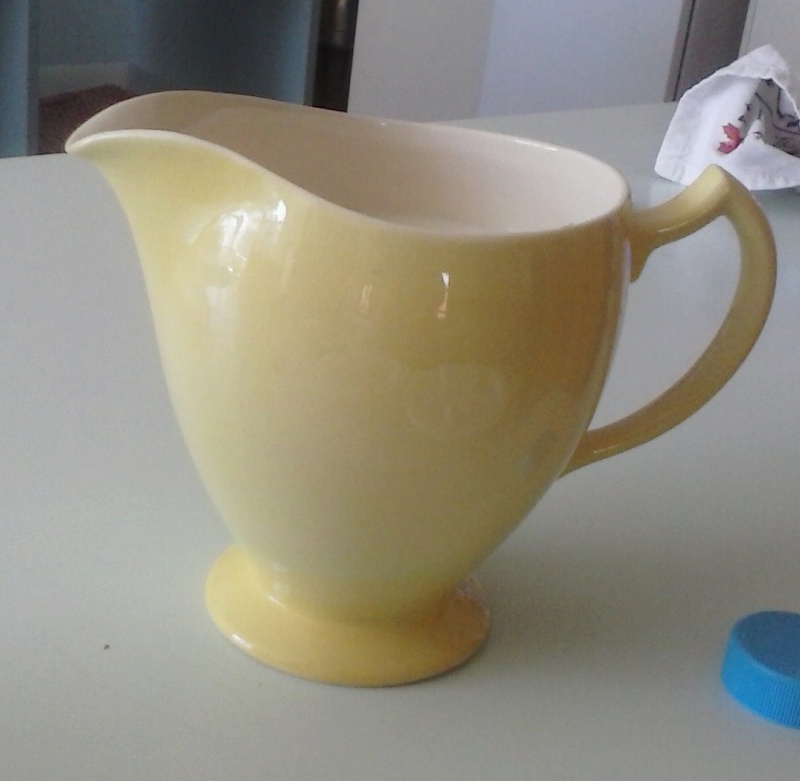 I didn't attempt to photograph base because, a) my phone camera isn't really up to it and b) jug was full of milk

I had a wee peek in the cupboard, and there were plenty of other treasures in there too, but it was a bit busy to do a full-scale exploration. There was Autumn Splendour, Topaz, some apollo plates plus various colourglaze, and plenty more that I couldn't get to.

I did notice a couple of 'speckled' colourglaze tulip cups in a cream/fawn colour with slightly gold/tan speckles - I regret not getting a photo now.

Wow thanks Cat !!
This has a Titian look to it and the numbers appear to be Titian.
The sizing starts at 0 for the smallest size usually, so a 2 would be a medium sized jug.
The country would have long forgotten Crown Lynn and Titian in cupboards in every town

Recently a local Bowling Club was being renovated and they sent all of their ancient crockery to the local Sallies, much to my delight.

"Titianware" embossed (if that's what you call it) on base as well as numbers, so definitely Titian

I love nosying in church hall and club cupboards, - colourglaze seems particularly prolific in them, due no doubt to it being the "cheap and cheerful" of the day!

It's a good sized jug (probably holds somewhere between a pint and a litre), so the large '1' size must be quite large indeed! That's a 2 litre milk bottle cap at the bottom right of photo, so an idea of scale.

DId you have any idea of when this shape would have been in production?

Hmmmm Titianware on the base plus numbers usually indicate Crown Lynn .....?
Anyway a letter before the number shows that it's Titian.
Actually the last separate numbers are usually 0 - 1 - 2 - 3.
Zero being the smallest and 3 the largest size.
Not sure when this would have been made but it would have to be before Crown Lynn took over Titian which was around 1968ish.
Gosh I bumped into Bev Brown of Titian fame at the Sallies and my mind went blanko
of all the million things we want to know - I couldn't even think of one of them!
Ha she wanted to know if I had found anything Titian and I had which is most unusual, but it wasn't at that opshop

Oops, I see I misread your first post re sizing lol.. must be christmas mush-brain setting in...