SPCA Kamo. 50c.
I took fright when I saw this. I saw the top glaze behind a stack of mugs,
and thought I was going to be lifting up a "Chinese" mug. 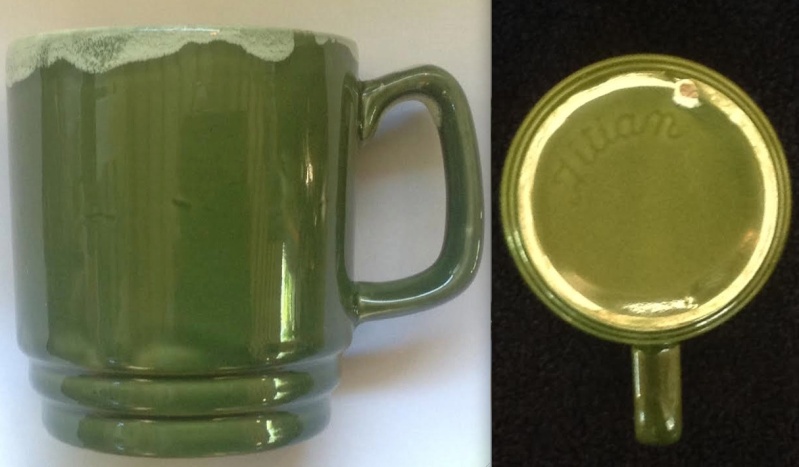 The colour is very similar to Thelma's Orzel set, perhaps the only difference being that Thelma's is on a ribbed base.
http://newzealandpottery.forumotion.net/t1371-nz-pottery-from-the-70s-is-made-by-orzel#3625
(I have the matching pepper and salt to Thelma's set,
so I can compare them side to side.) 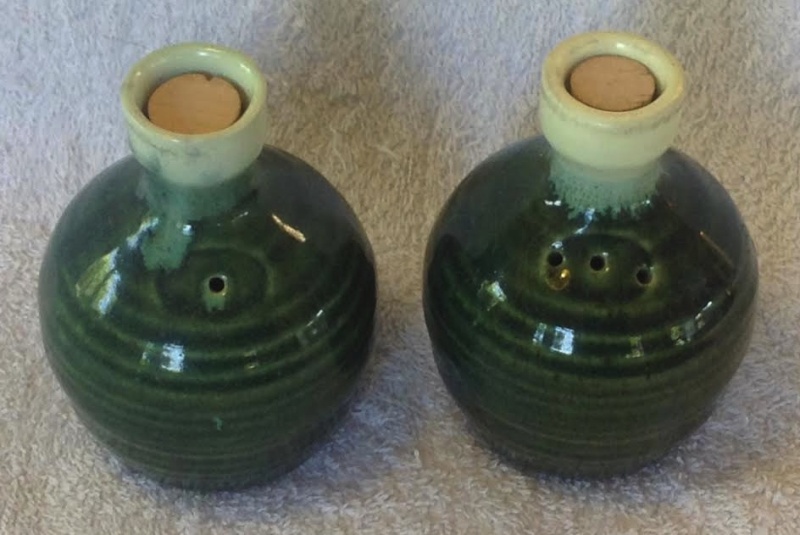 (This photo was taken in different lighting conditions)

The hickie on the base (not a chip) is a typical Orzel factory blemish.
I'm thinking post-Crown Lynn, old Titian mold, made by Orzel ...

Great show Jeremy as this is great for the records!

I've just made a search "titian mug" and found, amongst other things of interest,
a "titian tankard" topic from mrnarna, photo left, which appears to have identical glaze, and impressed mark as my mug.

http://newzealandpottery.forumotion.net/t1159-titian-tankard
"Marked Simply Titian in script" - mrnarna
I have this mug shape and confirm mrnarna's observation of the mark.

*I don't think this found its way to the gallery.

My thoughts on the mug got me looking at glazes on Titian pieces and wondering about the possibility of some being post-, rather than pre- Crown Lynn pieces.

The Hei Tiki mug from Hon-John, on the right, stands out with its bright orange. Reminiscent of the orange on various Orzel items, for example the jug on the left.
These items may have been photographed in differing lighting conditions:
I have seen the Orzel orange looking much brighter. 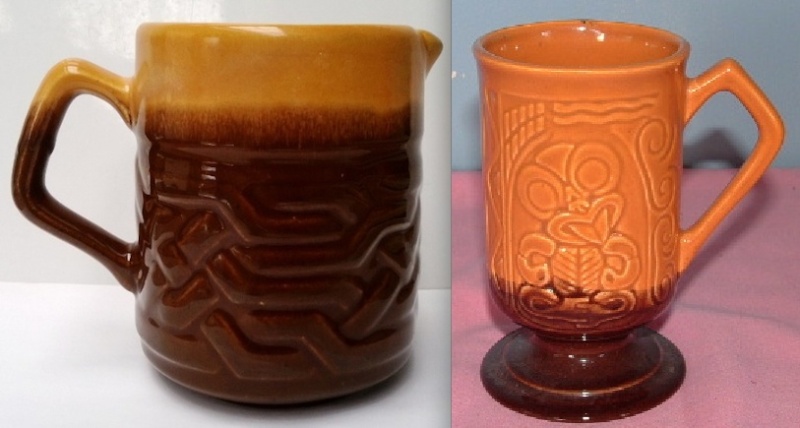 http://newzealandpottery.forumotion.net/t4079-orange-and-brown-orzel-jug
"You don't see this glaze combination very often in the Orzel basket weave pattern and it screams 1970's to me hahahaa" - Ev
http://newzealandpottery.forumotion.net/t237-titian-mug-from-hon-john
(posted by Ev, NB: there is no photograph in the topic to confirm identification
of the Hei Tiki mug as Titian)
... And note the similar handle styles too.

Also, note that the Titian mug Ev posted not so long ago with its brown over metallic black glaze and Prince-Charles-ear-handle, right, has a similar glaze to her recently-posted "this has to be a four-digit" ramekin, left, and Country Fair items. Perhaps it is the introduction of the glaze. Is this example perhaps less convincing?

*I don't think this Titian mug found its way to the gallery either.

As Ev notes about the orange Orzel: "screams 1970's".
It seems to me all these glaze sets scream 1970s, rather than mid-60s, when Crown Lynn effectively took over Titian, yet three of the mugs shown have an impressed Titian mark, rather than Orzel, and the other is annotated "Titian mug" on the photo.

Does this mark all four mugs shown here as post-Crown Lynn Titian?
(I admit I know nothing of the history of the origin of these shapes.)

The Hei Tiki mug looks like it's from the Orzel era to me which is when the Browns set up their business again after the Crown Lynn takeover..... early 1970's. When John sent that mug to the site he said "Hemara also gave me a Titian Mug with Maori pictures on it and I will send you the pic of front and back of it. No markings on base but it is Titian."
But John didn't usually differentiate between the different trading names used.

I know that Crown Lynn used many of the Titian moulds after the takeover and at one stage I was trying to work out which they were. I gave up and added them all to the Four Digits topic as it was a hopeless project. But the Titian style was obvious on some pieces, especially the handles.

I've added mrnarna's and my Titian mugs to the Titian Gallery.
The Galleries cost us for photo storage space, so for the longest time I kept them to the free minimum. Recently thanks to generous donations from some members our gallery space has increased dramatically and there is no worry about running out of space for some time.

Same shape, different green, same price, different op-shop!
(50c at New Lynn Hospice before Christmas, I left another one there) 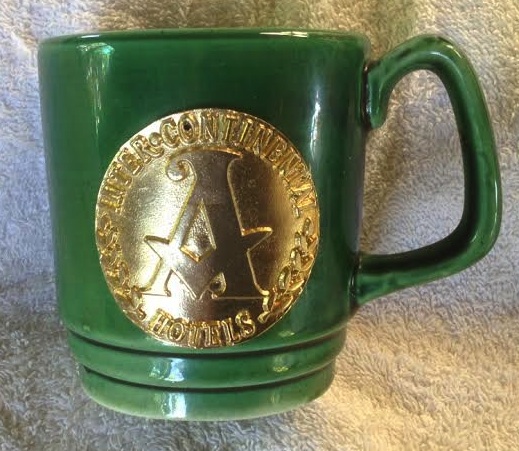 The medallion reading "Intercontinental Hotels" is metal,
glued, I presume, to the mug.

I haven't seen THAT before!

(Also, may not be important...
Titian stamp is the same but located at 12 o'clock to handle,
whereas the other is 5 o'clock)

That is a fantastic find Jeremy!
I knew that Crown Lynn made crockery for the Intercontinental, but not Titian!!!!!
This will have to go into the Titian Gallery