What with that metallic glaze with the contrasting gold breaking over the top just like the Country Fair it screams Crown Lynn with Four Digits to me!  Alas there is nothing on the base .......... arghhhhhh  But one day the truth will be revealed.  It's big enough to be a soup cup and has a distinctive hatched pattern at intervals around it's belly. 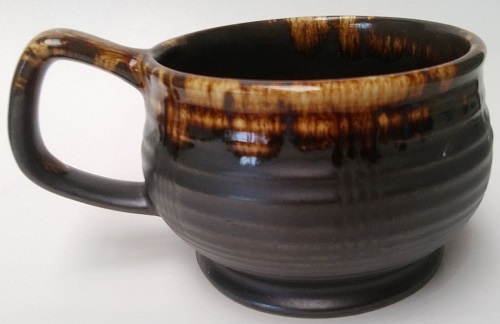 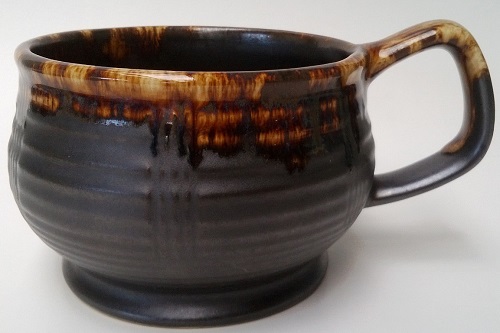 Ev,
I had a look at some of these today. I'm not sure it was the same glaze because the impression I now have of them is shiny. I had looked at them maybe a week ago and not seriously considered that they could be Crown Lynn, but looking at them, again, here I certainly see what you mean about the glaze. And with all the banded stuff that's been turning up lately, it does seem a fair assumption.

Is the metallic glaze CL, Titian, or Luke Adams?

I looked at three or four of them and, sorry to say, not one had any inkling of a mark.
(Even though they have a large area inside a substantial foot ring.)

I too have seen this shape before and wondered about it as there was nothing on the base, but this one really spoke to me with that metallic and gold glaze!
Initially I thought that this metallic glaze must have been Titian's, but I'm not so sure now, because this glaze was being used in 1979, long after Titian had been taken over.
I'm not really sure about the origins of this glaze as it's like no other that Crown Lynn used. Hopefully someone who knows about these things will come along one day and enlighten us

Yes, the ones I saw were shiny.
Same colours but appearing banded.

Here's another shape to contemplate. 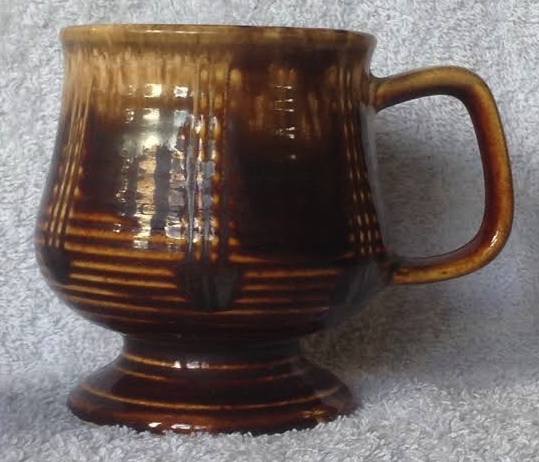 similar items in the gallery

I couldn't help noticing that the middle section of their pattern looks very like the pattern on these two above.

The gallery pics were provided by ynotbrich (no such member exists), yourself, and sid.

I could only find a 310 in sid's topics and could spend hours wading through yours.
Do these shapes ring any bells for you?

Yes, these shapes are in the Crown Lynn Shapes gallery 310, 311, 312 etc that were made for Salisbury after 1964 and then given four digits.

I've got 3 of those shapes and will compare them with the mug above
I will also check the four digit description for the vases and see if there are any mugs nearby.

Can't find anything in the records to match the 'Rolled Cross' description on those plant pots Jeremy.  By the way the 'Rolled Cross' plant pots were made in 1983 ..... that's a surprise !!!
We will have to wait for a numbered one to surface.  There are at least 70 numbers without descriptions from 1430 to 1500 and I've only found about 10 of these so far, so there are plenty more out there!
ynotbrich is a friend of the site.  She isn't interested in becoming a member, but is a regular visitor and sends photos to us of shapes that are not in the galleries.

Ev, you wrote above that the "rolled cross" pots were first made with 3-digit numbers for Salisbury. The date of the re-issue with 4-digits does coincide quite well with the two new items doesn't it? (Especially with the glaze on your one.)
I might have to spend a couple of bucks but I think I'll get the match for yor one in the other glaze, or see if I can get a photo at least.

I've just rearranged my four-digit mugs and the stemmed one I picked up is a good match for height, but the other, being more of a cup may not look so good.
I'm approaching fifty different ones now, and if it gets to much more than that I'll have to look for somewhere else again to display them. When I started collecting the gallery had about seventy to aim for but that number just keeps on increasing!

I note that when a new item emerges you dip into your notes and produce a production date. I haven't been following those too closely so perhaps you can advise me. Is the sequence of numbers chronological? If so, then I presume all those missing numbers you've mentioned will have items matching them as you indicate above.
If not, can you be sure that each missing number will have an item?

I have been placing my mugs on the shelf in numerical order as that is the easiest way to keep track of them. Nice to think that may be a chronology too.

That aside, thanks for pointing this pattern out. I thought I was getting smart at picking out unmarked Clay Craft, and Orzel, but now I have to keep my eye out for Crown Lynn unmarked too. I went through a process like this when studying early twentieth century Auckland houses 20 years ago, and when documentation eventually emerged I found I had made a pretty good job of it.

Another BTW: turns out all those items I picked as being Clay Craft have been confirmed to me as such.

I would hazard a guess that there are items for all of the shape numbers with missing descriptions, as it's looking that way from what has already turned up on the site.
I wonder if there is a page or two missing from the Museum records actually, as we have many more shapes than there are in the records...... Don't worry I am keeping tabs on them and the Galleries speak for themselves.
Yes each category seems to be in chronological order.
There is the odd exception though ..... for unknown reasons. 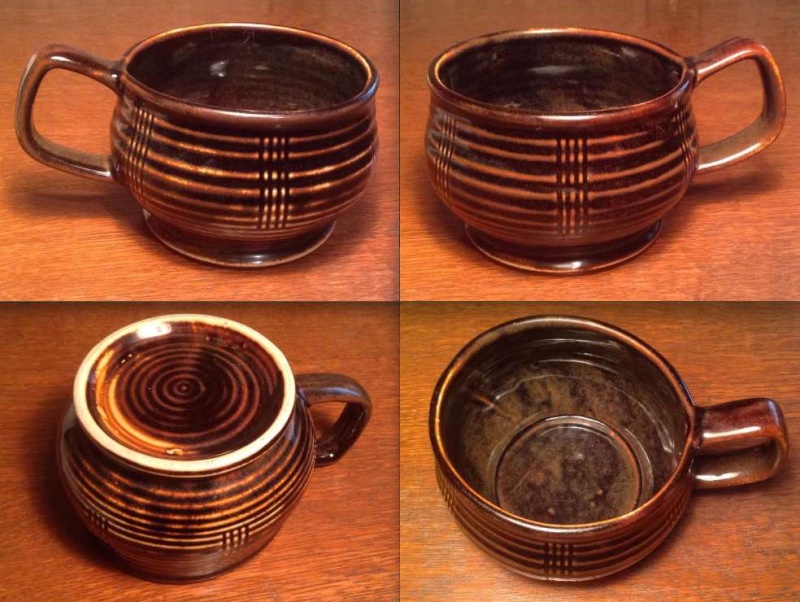 (Photo above changed 19/2/14.
(It looks more orange in the lamp light but it is the same one as below left.)

... and another glaze again 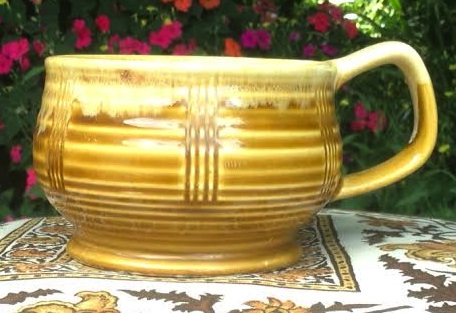 These cups are the same as the ones in this thread.
The coffee pot is one that I'm not familiar with ......
Not sure exactly where the two B's markings are .... on the coffee pot or on the mugs?
Perhaps the brown glaze matches the brown mugs, but the decoration sure doesn't.

The cups are a match for my one, and are commercial pottery.
And for reasons stated above likely to be unmarked Crown Lynn.

I presume the pot is as stated hand potted and so likely the part with the mark.
We have no B B mark do we?

I am looking at claims of "hand-potted" a bit closer now as so much that appears to be is not, but I'm still well outside my comfort zone with hand potted.

We have a Barry Ball mark that is two B's back to back and he did do a commercial slip cast range at one time, though this was under his 1280 brand name. As I haven't seen the coffee pot shape before I have no idea who made it.
Slip cast pottery that has visible rings often gets called hand potted, so I am wary of the use of that term.

Ev,
Try this out for size:

I was looking at the one in Linda's shop and thought to myself:
This glaze is Basalt! Therefore it is a shape made at Luke Adams.

If that works for you then I need to find a number for my footed one too.
The ones in this auction may be Basalt too:
http://www.trademe.co.nz/Browse/Listing.aspx?id=694751001

I like your thinking Jeremy and will look into this when I get a chance.

I think we have something.
My guess the four vertical lines [on the soup cup and the three on the goblet mug] are the tines of a fork.

I have to congratulate you on your cleverness Jeremy, as I think it is 100% correct
I was wondering what the description for your footed mug would be and it fits perfectly!

Two more numbers for the gallery!

The postings are a bit lean at the moment so I have been exploring the old ones and doing the maths. Late-night reading and a mine of information! I really appreciate the work you, Anne, Heather and others have been putting in over the years to get the forum to the stage where it is.

I realise we can not make new galleries ad infinitum so I am considering maybe lumping pics of all Lucow shapes, all Basalt shapes, all Aquamarine shapes (etc) into new topics. What do you think?

(((As I do not like to dominate the new postings scroll I have been putting a few updates on my existing posts. Nothing earth-shattering or I WOULD make new posts.
Latest is another lamp-base like the one I thought Orzel and you thought not CL or Titian. http://newzealandpottery.forumotion.net/t287-john-s-crown-lynn-titian-lampbase#14735 The crazing on this one was not apparent under fluoro at the Hospice shop; may be the same glaze as hon-john's...yet to check.)))