Double handle mug in Lucow. I'm guessing 1042
Bought in a box at the local auction. 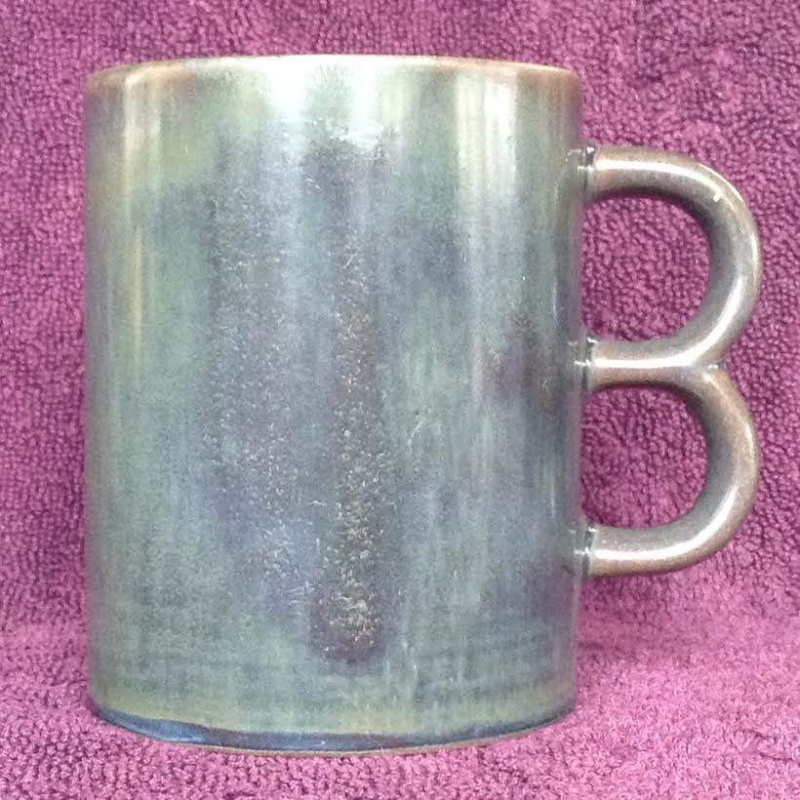 Well that's confusing!
I was going to post this as a reply to the 1064 link but I see this is a different shape.
See: http://newzealandpottery.forumotion.net/t4747-1064-double-handle-coffee-mugs-courtesy-of-hazlette#17183

Left photo by Hazlette. The handles on mine are smaller and higher.

I thought I'd bought a 1064 and taken one off my list but instead I've found another addition for the gallery: bugger....and yay!

Strange turn of events. I went to sleep last night thinking I wished I had splashed out on the 1064s on trademe as I would probably never see one again. They sold for $40 after I bowed out at $39. This morning a chance sequence of events took me to the auction house which I rarely do. Thought I had one but find I have something else. Weird!

Jeremy I have a diagram of the 1042 and it is totally different to this shape.
My thoughts are it is a 1064 with the handle higher and the handle also appears a bit smaller in size.

Ta. I will change the title.

The measurements from Hazlette differ from mine.
Mine is clearly taller. It is a match for the Luke Adams 1086 Basalt mug from the chunky coffee set. Beside anything else the 1086 looks too big, but just right beside this "1064".

I don't know whether it's in the photography but the other looks possibly semi-conical and appears to have a flared rim. This one is pure cylinder.

The handle shape appears to be the same but sticks out less on mine.

This mug is vey nice to hold. There is room beneath the handle for a little finger. I think the lower handle on the other one is an aesthetic rather than ergonomic choice.

I love this already. I had my dinner beer out of it. And that Lucow glaze!

I don't know whether to put it on my Lucow-Aquamarine shelf or with the four digits.

Jeremy it would be good to see this one tomorrow too if you are able to bring it.

Hey, look what Kat found for me!

I now have double handled mugs in both Basalt and Lucow: 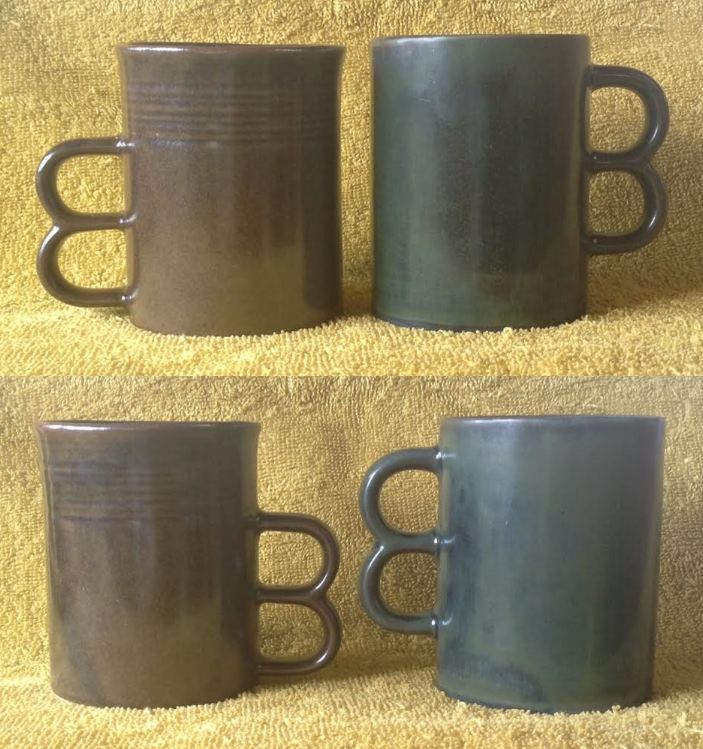 Now that I can see the two side by side, I'm having difficulty with the idea that the Lucow mug is also a 1064. Here are the differences I have found.

1. Size: The Lucow is 2+mm taller than the Basalt 1064 and also at least 2mm wider.
2. Handle: The handle on the Lucow is 5+mm bigger, top to bottom, and higher up.
3. Shape: The Lucow is plain and cylindrical, the 1064 has a flared top and rings, seen on the Basalt one but not visible beneath the thick glaze of Hazlette's mug, as seen above.

The Lucow is definitely a Crown Lynn Luke Adams, and I know now that it is not a 1042, but what is it?

I have just checked the Luke Adams list and come up blank!
I have even entertained the idea that it may be Aquamarine from the Titianware range but it certainly looks more like Lucow.
It may just have to stay a 1064.

Loose Ends: All the Aquamarine we have seen so far is high fire vitrified Chateau Range but we have only seen photos of the Expo 70 mug, and its backstamp does NOT say vitrified. It makes me wonder also about that green 660 vase that was on TM. Being from Auckland it would not be Lucow, but being earthenware it would not be high fired.

--------
7/3/14
I just realised that the unnumbered Lucow mug DOES have grooves or rings too: in the lower 2cm. It's not very noticeable because the glaze is so thick but I just saw it in the photo above and went and confirmed it. I can not see any further up than that.

I traded it for a Purple Myrtle Cup..great deal me thinks!!

I set this aside (mug on right) when I saw the handle was smaller than the one on the Lucow mug, but now I see it is the same handle as the 1064, match for height and shape but not as deep through. 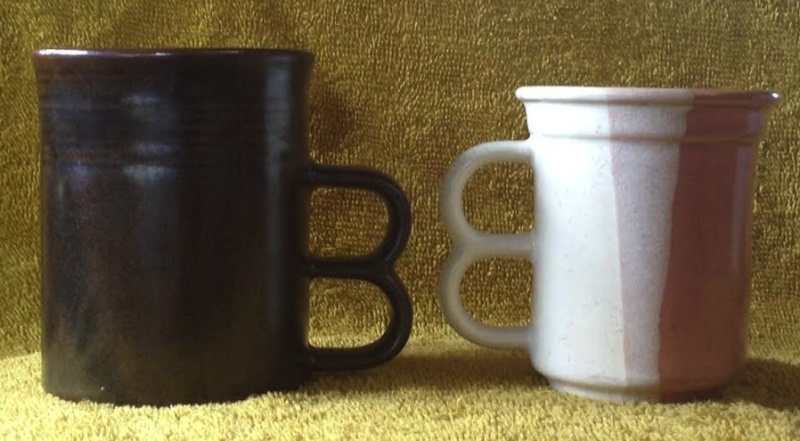 This pink and white mug is unmarked.
I do not recognise either the shape or the glaze as Crown Lynn.

I was just looking at the Teal brochures in response to Mike's latest listing and I noticed one of their colourways appears to match my unknown mug above.

The shape is alien, and the orientation is wrong.
I have arranged to see our Teal man next month so I will take it along and ask.

I was talking to Keith Sandford, one of the directors of Teal Ceramics today and he said that, yes, this is their glaze on the unmarked two-finger mug.

Keith shared the design at Teal with Ken Doidge, another former employee of McSkimmings. Keith does not now remember all their wares, which numbered well in excess of 100. This is not his design, but he said it does look like Ken's style of work.

All of Teal's output was vitrified castware. The casting of cups and mugs was labour intensive and was performed as outwork rather than by one of the seven in-house staff.

I see from Portage that on the 1064s made in Auckland the concentric rings above the handle have been dropped from the design. That and the glaze on Hazlette's (hazedaze) mugs sold on trademe (one can be seen near the top of the topic) lead me to believe that they are Titianware ones. That this change was made between production of the Christchurch and Auckland 1064s hints to me that despite even greater differences my Lucow two-finger mug may yet turn out be a 1064, perhaps an earlier incarnation.

So now I know that at least two 1064s were made in this high-handle version.
The glaze is probably basalt but I'm not totally sure. 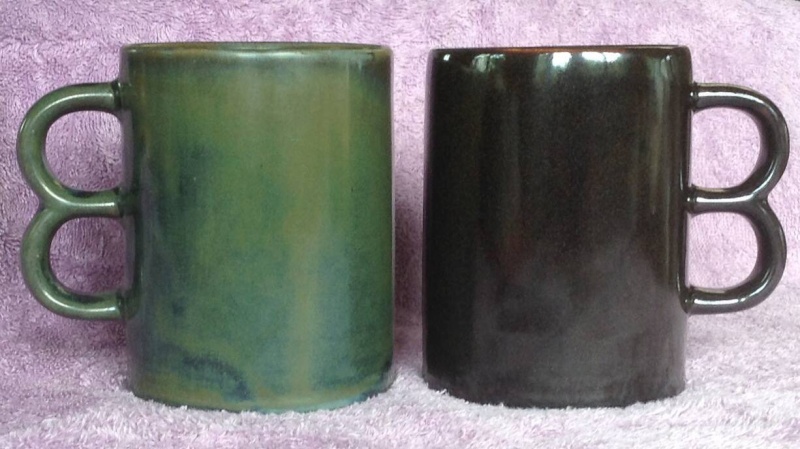 The Lucow glaze looks amazing in this photo.

It curves in a bit to a slightly narrower top than the Lucow one (otherwise the same measurements) but that could easily have happened in the fettling process.

It was so clean and shiny that I'm sure it's never been used.
Got a bit greasy in my hand on the drive from Dargaville this arvo.