Coffee Can Shapes from the recently posted definitions.

Taking this as a starting point:

Ev wrote:I was going through the database today and noticed that Danzig had the shape numbers 782/792 beside the name!!!!!  Heather confirmed that 782 are cups on her notes from the Museum and the 792 can only be the saucer for that Danzig cup!  So that gives us two new shapes for the Crown Lynn Shapes Gallery

Oh yes indeed I agree with all of your findings Jeremy!
Thank you so much and a great end to a simply fantastic day!
I will sort them into the correct galleries tomorrow ...

It was a pleasure for me too Ev.

Thanks for the parcel.
I have rearranged my shelves, as I now have 74 different four digit castware coffee or beer mugs, and at least one more on the way.

(I'm not counting soup mugs, canisters, ramekins etc which I just pick up out of curiosity, but don't seriously collect.)

There's lots of Basalt, and two Lucow on the shelves. The differences between Luke Adams and Titianware are becoming more obvious.

But back to topic:

I am so pleased to finally get the numbers for all those different coffee cans as it justifies my collecting them in the first place. It would not have been possible without those gallery notes, so I'm pleased you are getting some payoff for the work you put in there.

Once I've done what I can for the cup shapes, which may not be much more, I'd like to have a try at vitrified saucers too!

Because these shapes are pretty rare I think they must all have had a short run.
That would appear obvious for the the 3023 as the records say it "replaces" the 3022 within a year of its introduction, yet while the 3618 is supposed to have replaced the 782 its own rarity (just one pattern seen so far), and the persistence of the 782 after that time would indicate that the "replacement" was unsuccessful.

As the dates for the "replacements" coincide, and the changes to both vitrified and earthenware shapes are the same (reduced foot ring size), I am going to guess that the reason was something to with saucer production, or rationalisation of saucers.

The addition of the dates also allows some coordination of shape and backstamp times. The 3022s have "Kelston Potteries" and the 3023s have a circular stamp with pattern name included, plus an impressed New Zealand mark. The 3618 just has impressed New Zealand.
I don't know what to make of this data yet but I'm sure something will come of it.

An afterthought. On further examination, even though I have just a few examples to study, I'm pretty confident to say that two other subtle changes have occurred between the 3022 and 3033. The 3023 appears heavier and thicker in body (walls of the cup), and the body MAY be slightly whiter as seen through the clear glaze and on the unglazed footrings. There MAY also have been a change in the way decorations were applied.

The first observation above is consistent with my observations and comments elsewhere on tulip cups where I conclude that the body weight of tulips increased twice over the years of their production. Unfortunately there may be contradictory evidence from the backstamps as I believe the lighter impressed NZ tulips were replaced by the heavier raised Made in New Zealand tulips.

*coughs* I added another 7 coffee mug descriptions between 1000 and 1177 today.
Then there are only 13 MUGS left to load and a few beer mugs but I won't count those.

With the change to four digit numbering vitrified and stoneware items were numbered with x6xx and x8xx codes, so 4018 will be an earthenware shape.
The 792 is a vitrified saucer to match 782 vitrified coffee can, therefore I think the 4018 will be the saucer for the earthenware coffee can 3022. 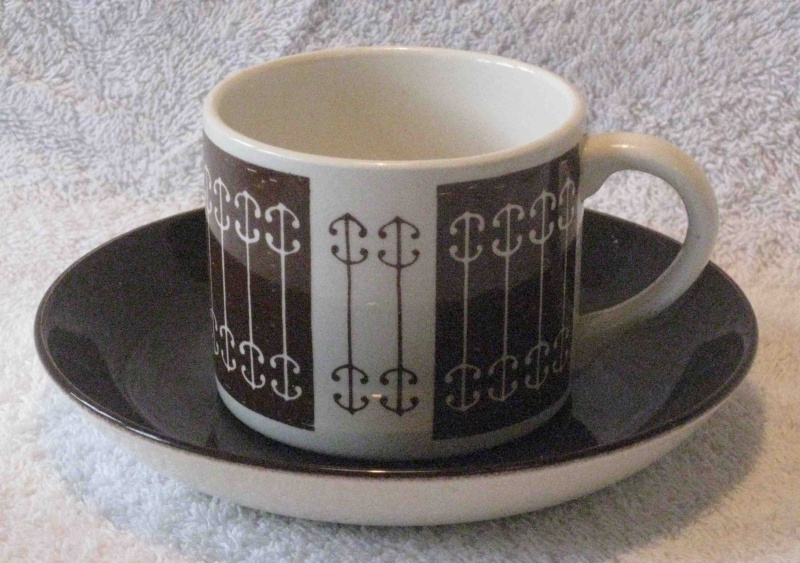 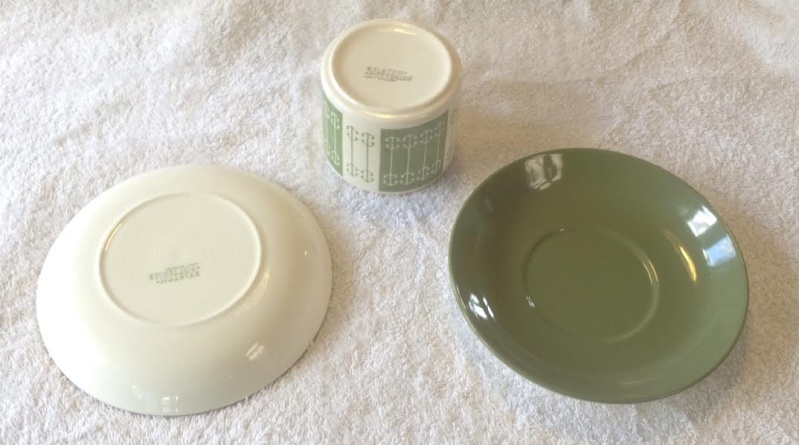 18/6/14
As this can appears to have been replaced within a year of its release I'm curious to know the fate of the 4018 saucers, whether they were used for another cup shape or dropped entirely. If, as the definitions indicate, these were made for such a short time, then that would make them very rare and worth holding onto, and complete with saucers more so.

Done thanks.
I can't find any reference to the Cook & Serve saucer in the four digit vitrified ware which is odd unless they just continued using the three digit number?

I think that must be the case.

For all the changes and new numbers in this topic, the 782 coffee can prevailed and no new number has appeared for it.

I've finally found the 3618 can in a pattern other than Reflections. I actually thought it was a 782 until Ben Lealand asked for a photo of the base:
http://www.trademe.co.nz/pottery-glass/porcelain-pottery/crown-lynn/cups-saucers/auction-1174019865.htm 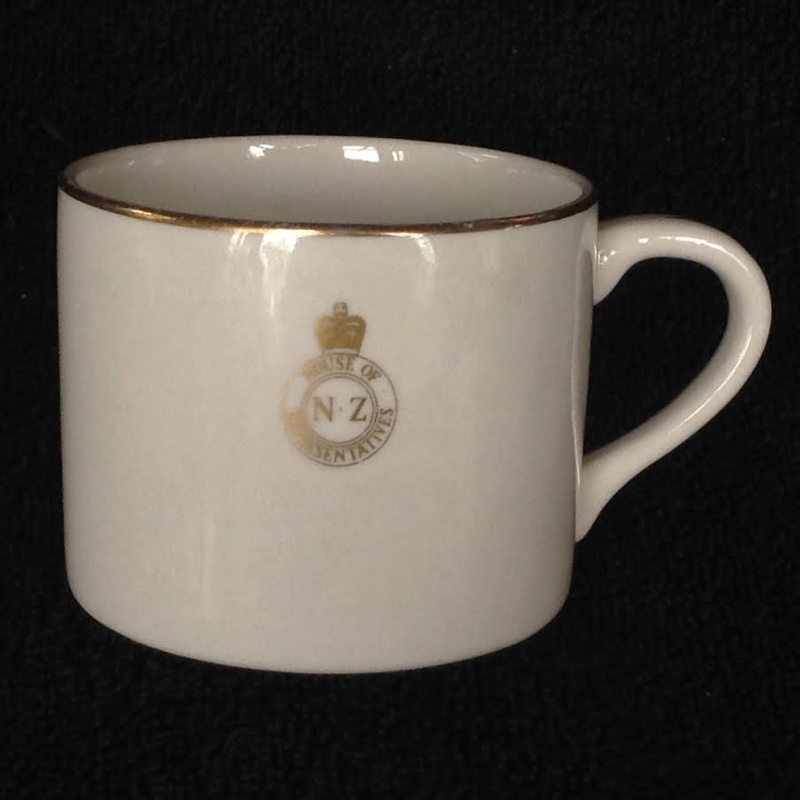 clear glaze on vitrified body with gold trim and monogram

Either way I wanted it so despite an expensive last second attack from another collector I got it. What chance is there of finding a saucer for this? I imagine it will be the same deco as the cup. I have nothing else that will do as the only matching 4610 saucers I have are Reflections. Never mind.

Note the reduced footring and the vitrified stamp, together indicating a 3618 father than a 782 (original shape) or 3023 (reduced-ring earthenware). 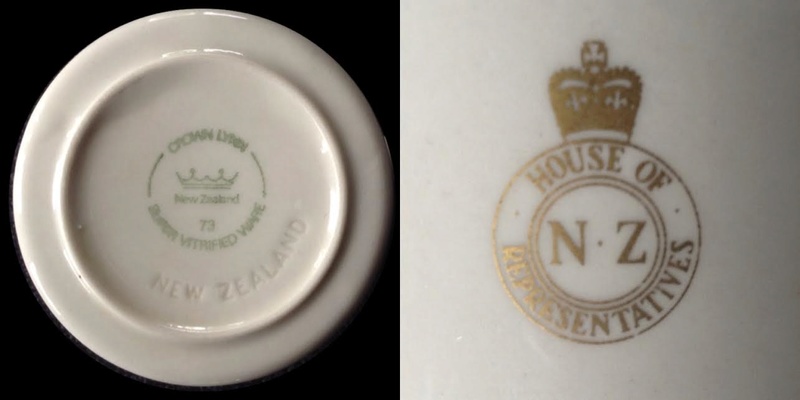 I have photographed the monogram but I see that we already have similar in the gallery from haselnuss: I'd like to see what shape that is on so if anyone can help, please do.
https://www.newzealandpottery.net/gallery/More-Crown-Lynn-Galleries/Crown-Lynn-Monogrammed-Ware/nz-house-of-representatives-pic_8399.htm

NB. I'll restore the original topic name when this post has had its run. Done.

Although my friend, whose collection inspired my own, had a head start in collecting CL vit cans this is the only one he had that I didn't.

And finally here's all three 3618s, the only patterns I've seen on this shape.
[]