» Please can someone tell me who Jan is? She is Jan Moresby.

For clarity, I have started a new strand. Click here for Ev's original entry.

I have recently made a connection between a previous mystery line and Parker Pottery in Henderson - and it appears that they made quite a wide range of domestic ware. The oil bottle on the left has a sticker Parker Pottery.  Both 18 cm tall. 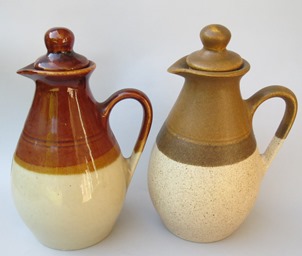 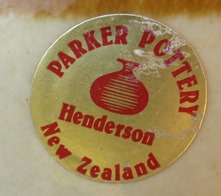 These two mugs are also the same shape and size - the one on the right is part of a Parker Pottery set I bought in Whangapararoa. Both 9 cm tall. 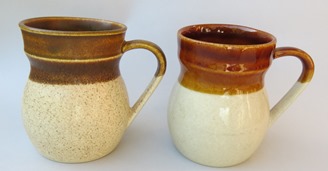 This is a link to the 'unknown brown' strand where we puzzled over more pottery with the same finish as the mug on the left.
https://www.newzealandpottery.net/t4395-more-unknown-brown-stuff
And this is a link to previous info on Parker Potteries, which is well worth looking at.
https://www.newzealandpottery.net/t374-parker-pottery?highlight=parker

From Ev's research it appears that Norman Parker ran a manufacturing pottery around 1986-89. Prior to that he had been a hand potter. Famously, he made the beautiful Lincoln Wines bottle which is sometimes attributed to Wharetana - see link above.  I am sure that Hemara Hemara told me he worked at Parker for a while, so I will ask him more about this pottery when I see him next. 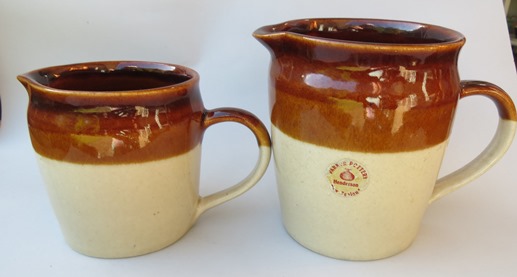 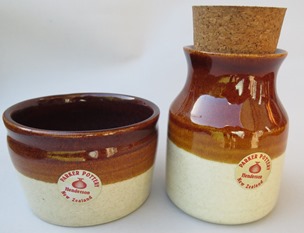 And this is a comparison between a shiny jug and a speckled jug. The speckled jug has a wider handle, but otherwise very very similar. 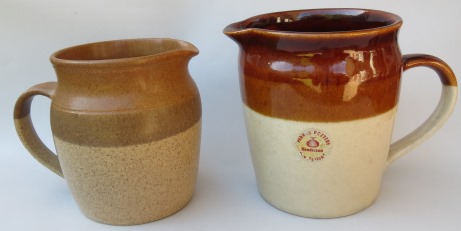 This is the best quality of the all the smaller Auckland domestic potteries I have found so far. I suspect the speckled line was earlier - some have flat bases, while the shiny stuff has a nice foot ring. 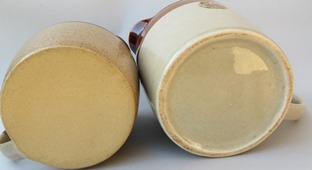 Yesterday when talking to Jeremy we realised that some of the brown banded Parker Pottery ware is hand-thrown. This jar is impressed with NP - presumably Norm Parker.  It has the interesting little koru swirl in the inside of the lid we first noticed on Beach Artware (click for link) . The shape is also quite similar, which makes us think there is a crossover between Parker and Beach.  I have never been especially keen on Parker ware, but now I look closely I see it is shaped nicely, and is quite finely made. 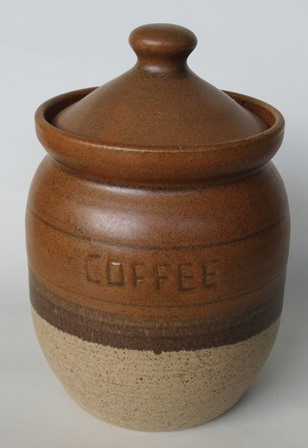 This group below is all unmarked but I believe they are all hand thrown.  The wee jars have the same koru inside the lids. The jug's handle has been applied after the body of the jug was made. 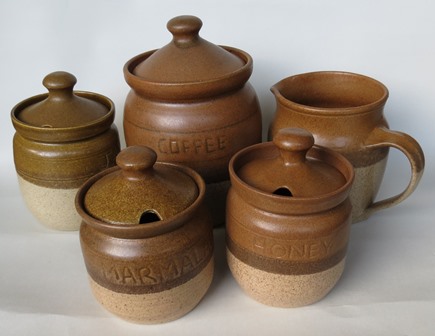 This margarine on the other hand is slipcast. Its lid is hollowed out inside where the slip has coated the mould, and you can see the faint marks where the mould is joined. 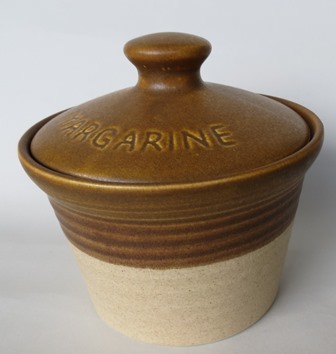 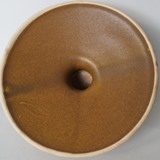 So what does all this mean? I am not sure at this point but when I have more time I will read through all the previous entries on Parker and see if I can make sense of it.

The Parker Tea Canister that I have is the same as Val's Coffee above, although mine doesn't have a lid. Is the gallery where the lid goes glazed on yours Val? Mine is glazed just like the possible Beach ware. I find this odd as there was a Clay Craft/Poss Beach lidded jar for $8 in one of the op shops yesterday and the lid swam around on the glazed gallery in an ungainly fashion.

Ev I have checked out my Parker lidded jars. I have about 8 ahem where do i keep all this stuff? All have a glazed gallery. So does my Clay Craft slipcast ware. And all the poss Beach ware. Is this an unusual thing to do?

Maryr wrote:Ev I have checked out my Parker lidded jars.  I have about 8 ahem where do i keep all this stuff? All have a glazed gallery. So does my Clay Craft slipcast ware. And all the poss Beach ware. Is this an unusual thing to do?

I've never seen this in my handmade pottery world, lids are fired in place and the glaze is removed from the rim of the lid and the gallery where it sits, then they don't slip and slide all over the place, but sit snugly where they belong. The commercial pottery world is a different story though. Norm Parker dabbled in both, so I guess anything is possible.

Sorry, but while taking pics of this Parker Pottery tea jar I noticed slip cast mould marks ....  This has a shallow footring and the base is glazed except for the footring. 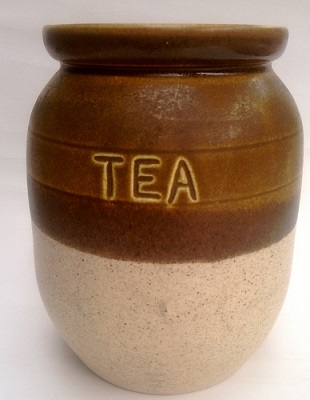 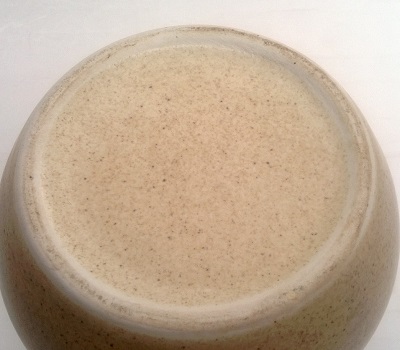 This odd photo is of the inside base showing the sharp angle that is not possible if handpotted.  This was the reason I looked for slip casting lines and I found them. 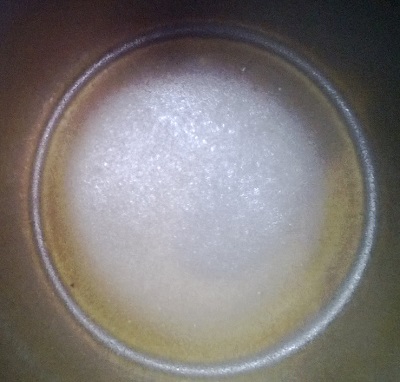 Thanks for this info Ev.  I am so enjoying learning more about hand thrown vs slipcast.

Here is another Parker item, a wine goblet. Found on the windowsill in our local community hall... which also has a few Crown Lynn white cups in the cupboard. 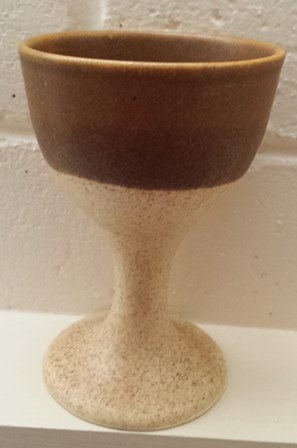 Another Parker mug.
This one is slipware and it is huge. 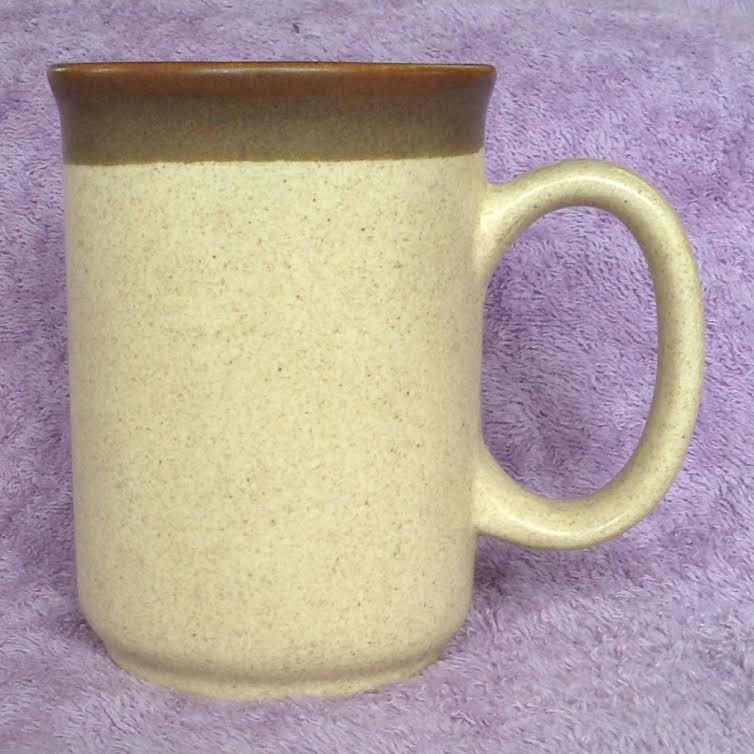 My first thought, based on the glaze, was Parker but I thought I had better check as the double dip has nowhere near the overlap that it has on other pieces.

Similarly shaped mugs were made by Crown Lynn, Clay Craft, Kermiko, Titian, Orzel, and Stewart (and I think there was one from Cindy Ceramics too): I have a montage of those on the iPad and can confirm it is none of them.

The Titian/Orzel mugs are probably closest and the glaze DOES look like the Orzel but the colours are more like Parker and the glaze is matt whereas all my Orzel ones are satin or shiny, so, as much as I would like another Orzel mug shape to go with the 20 or so different ones I already have I am calling this as Parker.

I have seen other Parker mug shapes in the opshops over the last year or so (gone now) but did not feel the need to buy them at the time. I will do so in future. 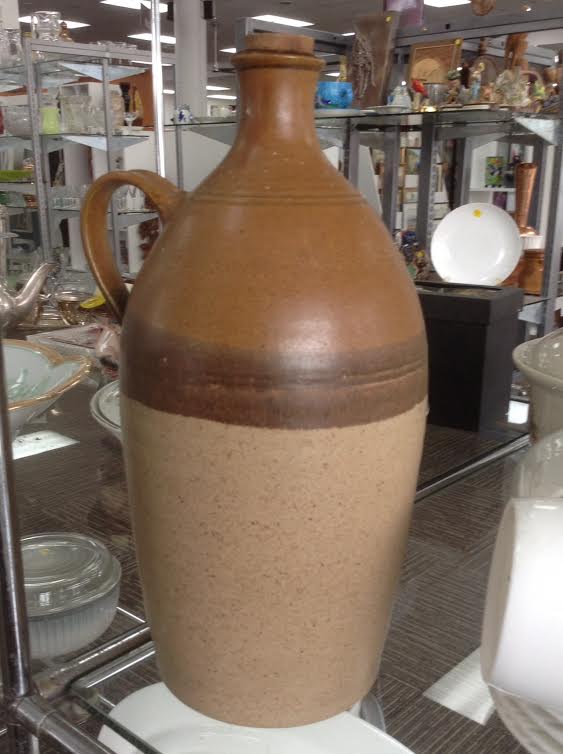 about a foot tall 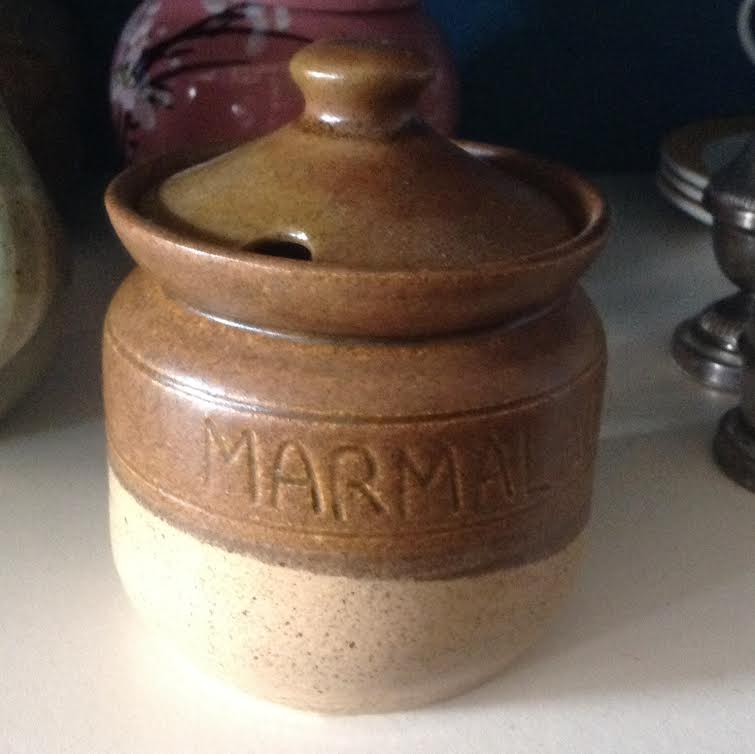 Val has already posted one of these above. Further to Val's comments about Parker handpotted I just want to confirm that this example is handpotted and does remind me so much of the Beach Artware pots.