Ev, Janice, I have something here for you to sort out.

I have thee mugs that look the same but they aren't.
They are the only three mugs I have in this "shape".

The first block of photos shows the 1314, left, and another brown mug with a Made In New Zealand mark only. The unnumbered mug is 1mm higher and 3mm wider than the 1314. Its footring has an OD 4mm bigger, and the OD at lip is 2mm bigger.
You'll notice a difference in handle size and height too. 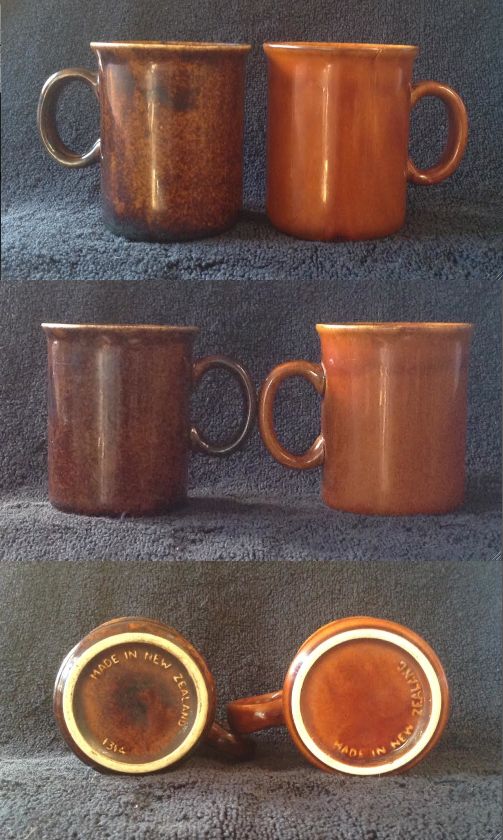 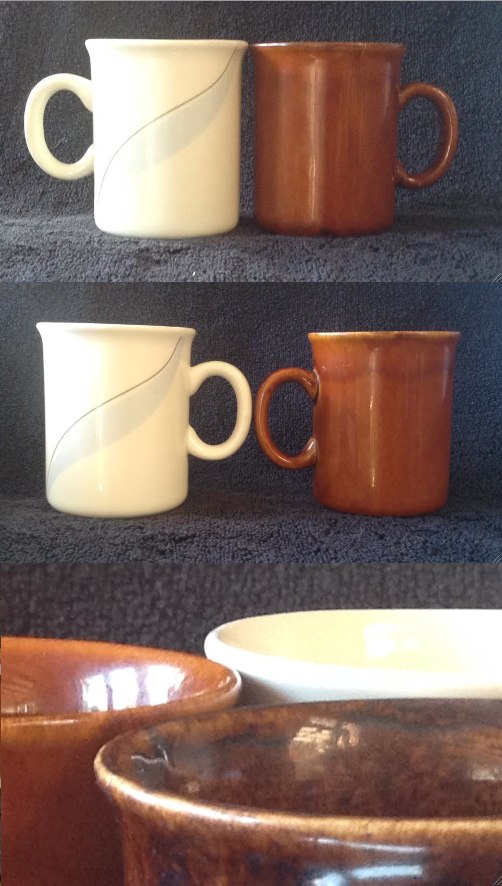 The white mug, the pattern of which I cannot find, is bigger again. Another 1mm higher and wider (in all but footring). The handle of this one is closer in size and position to the 1314 than it is to the mug in the photo. It has a Made in New Zealand mark only. The left hand mug is also heavier than the right: 235g vs 215 g.
The final image shows respective heights of all three. (1314 in front.) It is not a trick photo.

If I was to pick which of the two (if either) was stoneware, judging by the exposed body at the footring, I'd pick the white one, but I am not familiar with stoneware so I'm not making that call.

It's not Duet and it has a thin metallic line .... I know the name of that pattern but it's just not coming through!!!!!!!!!
Anyway the cup with the pattern should be a 3050 just like the Duet mug.
We are still puzzling over the others. Hopefully Janice will pop in here too.
The stoneware will ring truer if you know what I mean.

That leaves the other brown mug.

So, the results of the ring test:

The second brown mug is sized between the 1314 and the 3050, yet it emits a higher tone (rings truer?) than both when tapped with the solid handle of a stainless steel table knife. (Dinner's over now!)

So there is a possibility then that second brown mug is a 3802 stoneware.

I know stoneware and vitrified are different clay mixes etc, but the size difference fits with what we have been finding wrt the relative sizes of E/W and vitrified items of the same shape.

The blotchy brown glaze on this odd mug is certainly a departure from the posted 3050s which tend to be plain colour or transfer/screenprint.

There have been so many 3050s posted in show-us-your-mugs and other topics I was starting to wonder if perhaps some were not actually 3050. To the best of my knowledge no one has pointed out any differences in size.

Jonno has posted some with a reduced foot ring size which must surely also be a different shape.

Both brown mugs came from my the estate of my friend Graham.

I've been tapping mugs at the opshops for a while now and am now totally convinced the mug above adjacent to the 3050 is a 3802. I had Adriana join in open day too. Almost bought another today but though what do I need that for.