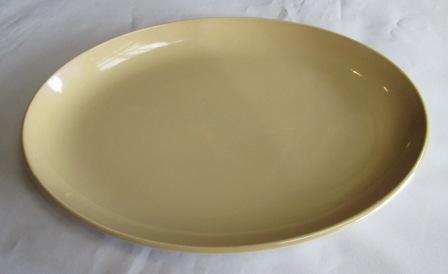 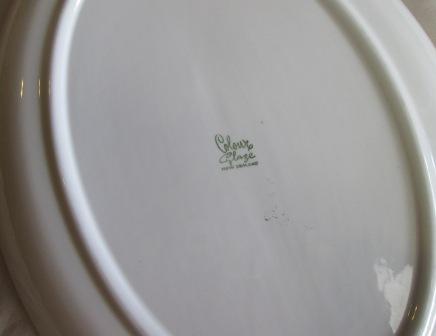 I THINK the backstamp on your dish would have been replaced with the later round one by that time, so would go with the 741/8013 option, and then the 741s are 10 and 12 which could be inches so the 13 inch 33cm seems more likely the 8013. I suspect a 741 might have an impressed number too.

I have the same dish same colour, but unmarked, and one in Fleurette but that stamp is not helpful.

When did the ram press come into use?
Val has not put it in her index and I can't see it in the timeline either.

Last edited by Jeremy Ashford on Thu 17 Apr - 13:36; edited 2 times in total (Reason for editing : to cross out mistake)

I have another too..Blue Colour Glaze with round backstamp in another shape same size just slightly narrower & different base so they don't stack nicely..could that be 1146?

Yeah I've noticed that there are two sizes similar but not same.
The stamps say the yellow is the earlier one. The shapes too. Have you noticed how plates and saucers lost their footring for a hollow bottom?

I just did something else that may or may not be helpful.
I saw in the gallery that 8011 is also an oval dish, and the measurements work for my smaller Fleurette oval, which is the same shape (same footring) as the yellow one, which would make it 8011 for my smaller Fleurette, and 8013 for my larger Fleurette and your yellow dish above. Measurements are pretty good for both.
Bit of a problem as my Fleurette is same length as my yellow, same footring but 5 or 6 mm narrower! (250mm  vs 245mm) That may make them different shapes. Ie my Fleurette is not a match for either my yellow or yours. (Alternatively variation as a result of the manufacturing process.)

The alternative to the 8000 shapes is that both Fleurettes are 700 shapes, but unless someone's made a mistake in describing the 8013 that would suggest the 741/12 is the smaller one (which is counter-intuitive) but I see no other definition for that shape. Ev may know.

I think my salad bowls which also have the same footring, are 772s, as they match the shape of my 789 casserole. Problem again with sizes. Sunburst is 3mm wider than Colour Glaze, but its footring is slightly smaller!

I'm still stuck on that "political" in the definition for the 1146, and the date for ram press, which will give the earliest possible date for an 8013. I'm just not sure whether these oval dishes are three or four digit!

Kat,
With that date for ram press I'm thinking that perhaps everything but your blue ashet is three digit, leaving the blue one as the 8013. We already have a 741 in the gallery.


I'm still bothered by the size differences in the salad bowls but will suggest that the yellow one with the colour glaze stamp at least is a 772 Salad Bowl E/W, and ignore the other for now.

And THEY appear to have numbers. But maybe the sizes are different.
I think we need Janice to come in on this discussion too.

Salad Bowl 772 we need a pattern that was made before 1964 and the 4057 we need a pattern from after 1964.  Any ideas Jeremy? Your two bowls are basically the same shape with small variations which I'm sure you would find across the board at any pottery.

I have the colour glaze ones, 2 blue, and a green, with the older colour glaze backstamp, and I also have a yellow with a round dishwasher safe stamp which I think will be post-1964. I'll take your advice on possible dates for that one before comparing with the others and taking photos. (The boy is eating his morning cornflakes and milo from that at the moment so I had to get him to hold it high to see the mark!)

The "handpainted" Sunburst may be easy to date as I can't see a lot of them being made. Mark as above.