This measures 300 mm on the curve and is nicely made in a very rustic way. Definitely has some age. Any guesses as to age or origin. Cheers 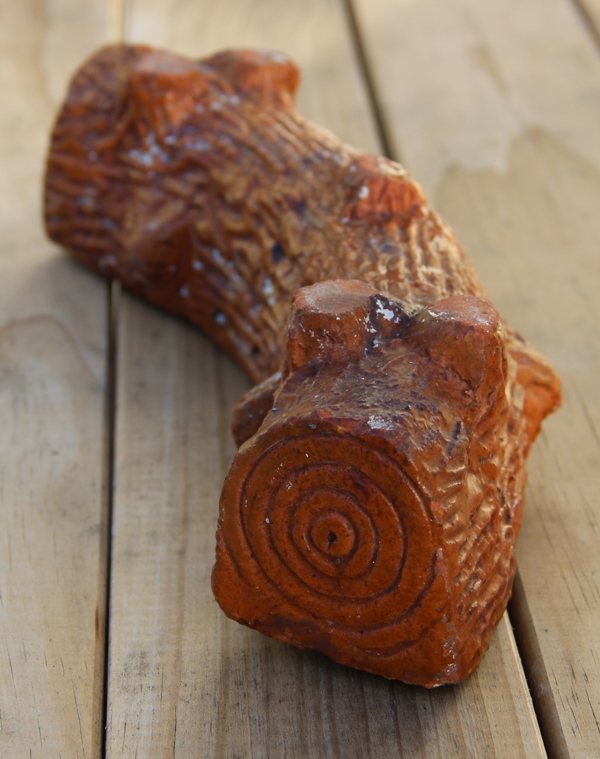 Re: Large Tree Log Trough Vase is made by Fulford's Brick and Pottery Works

Woohooo Mike this sure looks like Fulford Pottery.
Check these listings out on Trade Me -
http://www.trademe.co.nz/Browse/SearchResults.aspx?searchString=fulford&rptpath=340-&type=Search&searchType=7515&generalSearch_keypresses=1&generalSearch_suggested=0

One listing kindly gives some information which I will add.
"Fulford’s Brick and Pottery Works & Eves Brickworks, Havelock North."

Hi Mike
Your log vase is definitely Fulford Pottery, I have one the same on my shelf

I'm a fifth generation NZ Fulford and am very lucky to have a few pieces of my family history in my possession.
I also have a brick with Fulford stamped on the indent and two large strawberry planters with the same faux wood patterns as the vases.  I was told by my father that these were made as a gift to my great grandfather and my grandfather added the concrete at the bottom to stop the soil falling out if they needed to be moved.
The original brickworks were closed in 1914 but Huelin Fulford opened Te Mata Potteries in Havelock North, after WW2 and this closed in 1974.
My grandfather worked on the Fulford Orchard that also opened after the war.  I have a few ledger books that I believe were kept as they weren't fully used.  In one of the ledgers it starts detailing brick, tile and pipe orders, then a few pages later it turns into apple, pear and cherry orders.  There were no pottery orders listed so my guess would be that the majority of Fulford pottery in shape of pots and vases were made in the potteries.  So the log vases would be at minimum almost 40 years old.  But if they were made in the original brickworks they could be up to 128 years old as the brickworks opened in 1887.
I'm still researching and collecting information on the family history but I hope this throws a bit more light on your vase.

Re: Large Tree Log Trough Vase is made by Fulford's Brick and Pottery Works