Another addition from trademe for my castware collection.
Blue 1372 "Bellows" Stacking Coffee Mug 21.3.83 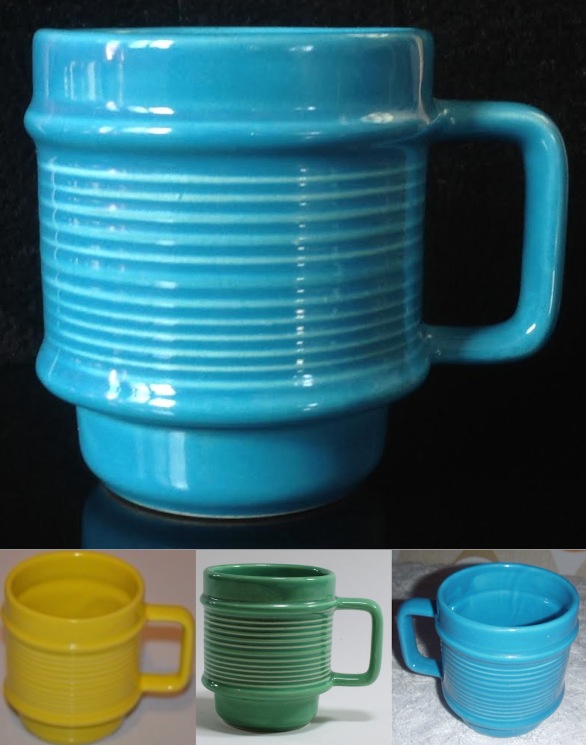 --------
5/9/16
I have added an orange one to my collection and will photograph when the iPad lets me. That hakes four colours now.

As we keep finding Titian mug shapes later reproduced as Crown Lynn castware, a few examples being the Titian 523 that became the 1109, the PM-100 that became 1150,  and most recently the Hemara-designed 1110 souvenir Maori mug, I am wondering again about this shape.

Mine was advertised on TM as Titian, although I think that might simply have been a misreading of the basemark, and Auckland Museum has it in their collection as Titian too, even though their example also has the Crown Lynn number:
http://www.pinterest.com/pin/429108670715503991/

You could say all the castware mugs are odd, and stand out for one reason or another (this one for shape, size and single primary-colour glazes), but I wonder if it was a genuine mistake or there was some insider knowledge at the Museum to call this Titian.

As for other possible Titian designs, or at least in-house designs as opposed to find-a-mug-and-make-a-mould, among the castware I am immediately suspicious of those with the large impressed numbers and dots, which includes the 1010 (referred to as "Titian") and the 1300. I don't have the complete range so there may be others with that presentation of numbering.

For the record, my Bellows mug has raised numbers like the majority of "Titianware" mugs.

I've always wondered if ware with Titianware on the base was Titian before Crown Lynn took them over and used the same moulds. There are so many different shapes and I'm not sure if that 1110 is from Titian times or Crown Lynn takeover times and as it's in the Crown Lynn records and has a description I'm leaning towards it being Crown Lynn. Hemara just said that he made it, not that he modelled it although it does remind me of the Ti Toki bottle design. The modellers design drawings for the 1110 are in an old Crown Lynn modellers drawer. We must ask Cam and Bev Brown about that one day.

Re 1110. I think the glaze could be key. The earlier one posted has a white interior, which is very unlike the usual castware, whereas the one marked 1110 is brown allover.

Mark Cleverley's remark about not really knowing what "those people at Titian" were doing wrt the castware mugs suggests a second Crown Lynn brain at work. Maybe, to some extent, it was business as usual after the takeover.

What I am trying to ldentify is mugs previously made and sold as Titian, or at least modelled at Titian before Crown Lynn took control.

I know the castware made at a Titian had a variety of different markings but I have not found reason to interpret what each individual mark means, nor have sufficient data to do so. You would need to upend each piece of castware and document it. Conceivably I could do so with the mugs as I have quite a few now but I am in no hurry to do so!