Is this Titian??? Yes it is an F.12 Marlin Ashtray

This is marked but is almost un-readable.51.2?. 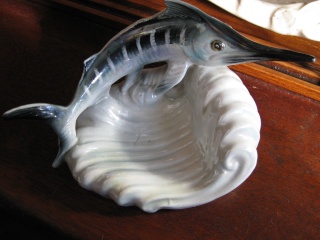 Take a look up in the Titan Studios gallery, I have one identical. Manos assures me it is Titian and mine has obscure numbers too - I really cant read them at all.

I think the Titian numbering system incorporated a letter to begin with to describe the category..you may have seen the two black painted pieces up lately, the tiki and the kiwi.Though one was described as numbered 815 it was more likely S15 and I think the kiwi is S16 from memory. S stood for souvenir.

V is for vase B for bowl (Gail Henry page 152.) There are similar fishy ashtrays on page 155 and these begin with the letter "F". Fancyware?? Flippin' smokers??

I think thats it Heather F.12. Not bad for a fiver at an auction