I have been meaning to post a few holiday purchases including the 5620 below which is in a different glaze from the usual "Pioneer" colour (middle left in montage) and has a different backstamp from the usual Cook & Serve, then today I spotted something that forced my hand: an individual casserole effectively the same size as the 5620s but marked .1645. (top right, middle right, bottom centre)
This is smaller than the 1645s previously posted and provides a second missing link between shapes 1645 and 5620. (For more on that see bottom of post.) 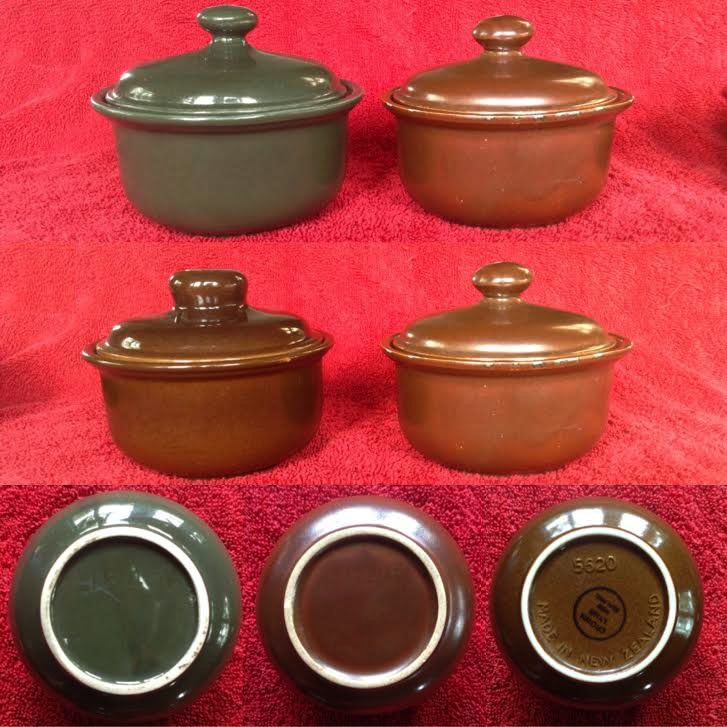 You will note that although this different 1645 is the same size as the 5620 it has a knob more like that of the earlier 1645, similar but totally different: altered shape and no air hole (as used to avoid exploding in kiln.)

[edits to say the 1645 is actually a bit smaller and lids are not interchangeable.]

Another observation is that as much as the Aquamarine glaze may be likened to the Luke Adams Lucow the glaze on the new shape is very like Adams' Basalt.

Very interesting Jeremy. I will need some quality time to soak up your post.

I picked up another 1645 today (also from the Sallies), but unfortunately it was without a lid. It has a manufacturing defect on the rim but it does have no chips. I thought I could replace the one from my previous post with this one, but ...

... when it came time to photograph the mark to compare with the other I noticed a few things:

1. The glaze is different, much darker. I said above, and I still think this to be the case, that the glazes on these Titian wares approximate the Luke Adams glazes, Lucow and Basalt. While this new one is much darker, it still falls within the range of Basalt glazes on the 15 Adams Basalt mugs and random other Adams pieces I have.*

2. The mark is raised rather than impressed and in a more typical Titian font (as seen on numerous mugs), but unlike my other 1645s it has a single dot after the number and none before. The others are both impressed large numbers with dots before and after. I initially thought there may be some significance in the missing dot, and there very well may be but I know not what!

4. No lid! The lids for both 1645s from the initial post have a different lid shape, particularly the knob, from the 5620s. One can only guess what lid this one would have. (My guess would be the same as the 5620s. I will visit the shop on Monday and see if they have something out the back.) 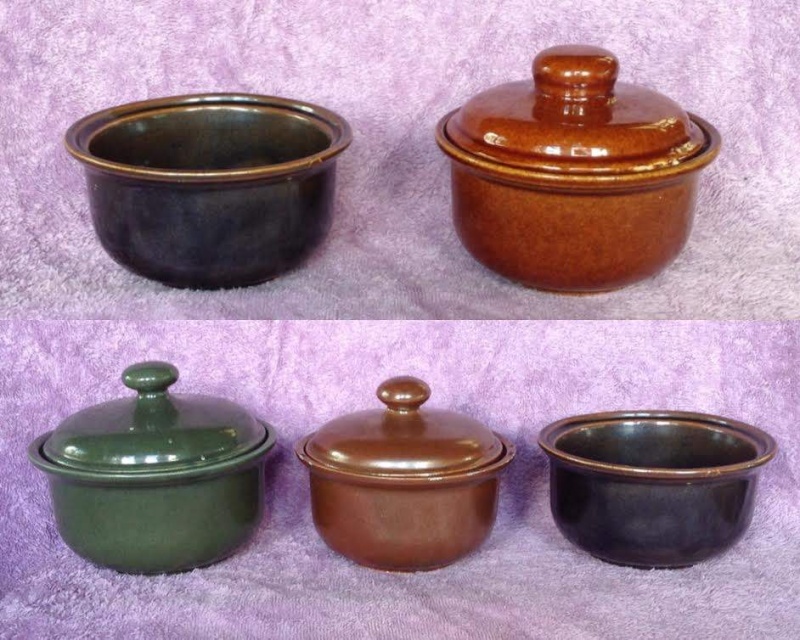 the base marks matched to the pots above

Three different pots with the same number. An evolution of shape. It might make some sense but Rufus's 1645 shape with a 5620 mark really throws a spanner in the works. Rufus's 5620 first appeared here:
https://www.newzealandpottery.net/t1603-crown-lynn-shapes-discussion#4556

And some more speculation ...
I don't know when Rufus was at CL but if it spanned the setting up of the jigger machinery for the 5000s then maybe his example was just one of a number of trials before they settled on the final 5620 shape.

A reminder, all the 1645s will be vitrified castware.

The 1645s in this topic (and those in the green glaze belonging to others) are the only ones to turn up on the forum and are all in the Titian equivalent of the Luke Adams glazes Lucow and Basalt. At this stage I see it as no coincidence.
We have pattern numbers for all but the brown/black Titian glaze: Adams, Basalt (124); Titian, [Titian brown ???]; Adams, Lucow (147); Titian, Aquamarine (172)
My next point to check is references to the Chateau Range and sale thereof at 246 in Auckland's Queen Street.
https://www.newzealandpottery.net/t4358p15-aquamarine-lucow-and-one-other#16941