Jim has not had visitors for a while so I got to see some very special things today that Val and Kat have yet to catch up with.
Jim has opened some boxes and I think that is where this has come from.

Of all the things I wanted this most. I'll just have to keep wanting.

Ev, this is a a small vitrified coffee cup and you may have a number for it. Or not.
Unfortunately I did not measure it and I did not compare it to a vitrified Carlton cup but I know it is about the same size. You will get some idea of size from the background objects.
The handle has not been seen before. 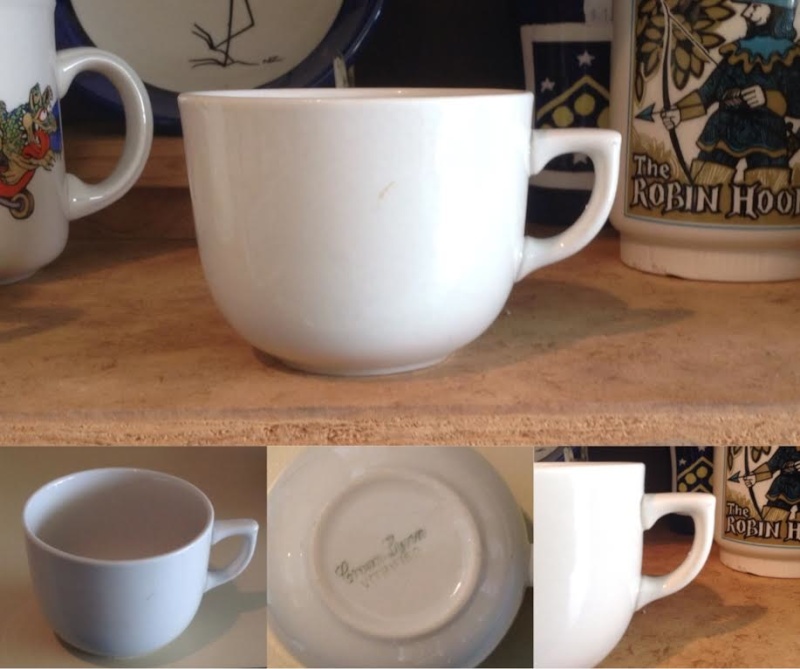 ---------
18/3/16, after Jim's place yesterday ...
[pics to follow]
... no matter how you look at it this odd cup of Jim's has the same body as the vitrified Carlton cup 755. As the bases show the odd cup is the earlier at 48-55. I have yet to see a vit Carlton cup with a 48-55 mark, but the Carlton cup handle has been around since Ambrico days.
(I do have a single earthenware cup in the 755 shape, slightly bigger as befits e/w vs vit from same jigger.)
I have to wonder how many of these earlier cups were made, and if the 755 was a later replacement.

I am now a bit reluctant to think that this is a 745 small hotel cup vit but who knows.
There is one photo I have to check which I think matches a Carlton cup with a 743 saucer so it may still be correct. 745 on 743 sounds good. Maybe the 755 shape started out as the earthenware Carlton cup.

Wow that is a new one! Nothing springs to mind, but I will keep a look out.