» For gallery Titian and an Orzel treat

» A Titian Urn vase for gallery

During our pre-Christmas bicycle express holiday of Nelson (etc) Nicole, Tomas, and I paid a visit to Darryl Frost's workshop, gallery and sculpture garden, "Playing with Fire", in Tasman. I had first seen Darryl's work at the nearby Cool Store gallery in Mapua.

The display there included his trademark ceramic axes and some quite large handleless beakers with inclusions in a different clay that he is also known for. I held out in the hope that his own gallery would be open when we got there and that he would have something with a handle for my mug collection.

So, the next day en route to Motueka we cycled 1km off the main drag (turn right at Steve Fullmer's!) to "Playing with Fire", on Kina Beach Road. Darryl was not there when we arrived. After first inadvertently selecting a mug by Sarah Harrison from Darryl's gallery (the only vessel there with a handle, AND I didn't have my glasses on to read the mark) I spotted this mug covered in clay on a bench in his workshop. Its boldness appealed to me more than the mug I later found to be Sarah's, but as Darryl was not there I thought it inappropriate to assume that he wished to sell it. Fortunately he returned, and after giving it a quick wash was happy to part with it. I am very pleased with it, and Nicole let me buy Sarah's mug too! Sarah's mug: https://www.newzealandpottery.net/t5637-great-barrier-island-dish 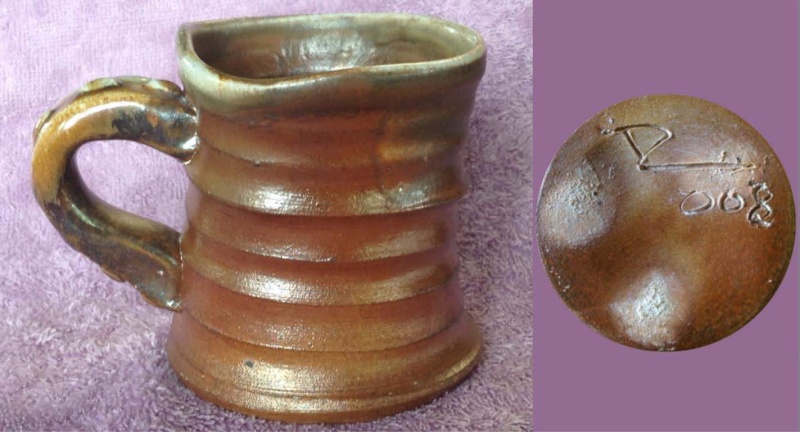 The signature on the base of this piece varies from the examples on the potters marks site but as noted there, "always the year". The 008 indicates that this was made seven or eight years ago in 2008, and has likely spent that time as a workshop mug. The handle is very heavy and awkward to hold with an index finger, but held in a fist the middle finger slips through very comfortably and the index finger fits the flat above. I think the robust masculinity of this mug is entirely consistent with a fist-hold.

I thoroughly enjoyed our detour to Darryl's place and am feeling a bit silly for not taking a load of photos. We are very grateful to Darryl for tending to Nicole's injury when she dropped her bike on her leg instantaneously producing a massive haematoma. With bandaged leg Nicole was able to cycle the remaining 15km (plus side trips) over the hill to Motueka, by which time, miraculously, the swelling had completely subsided. 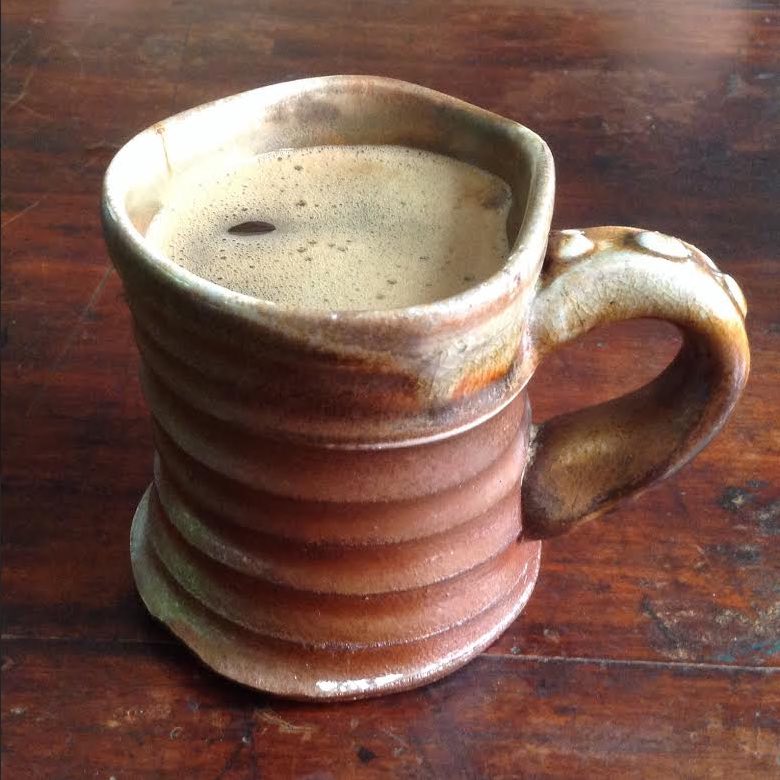 This is my first coffee in Darryl's mug, 29/12/15, at Joss' place in Avondale.
It was very enjoyable, even with a bit of slurry remaining on the outside. My new favourite mug!