This is so typical of Pat's work.  The shape, the glazing, the feet and the shaped cork.
It's too small for wine, but perhaps it was made with Sherry or something similar in mind. 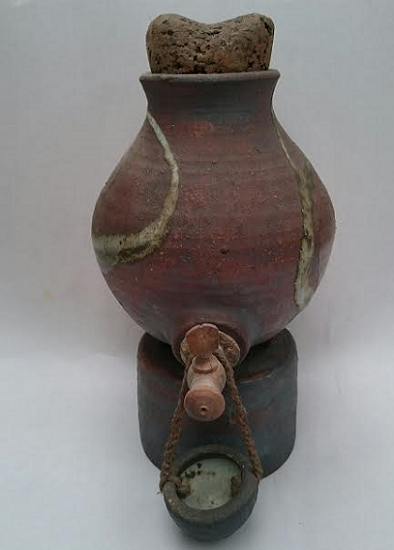 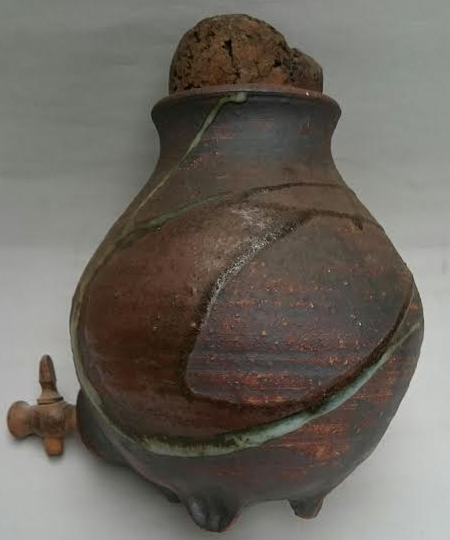 Wow, that's a great find Ev. Fascinating that it has that stand too. Is that wood or ceramic?

Thanks T&C, but I won this on Trade Me about 5 years ago and had to beg and bribe the big boy collectors to let me have just one of her fabulous pieces.
They were gentlemen and gave in to my wishes.
This isn't marked, but it has all of her hallmarks.
She was a tutor of mine at ASP in the 1970's and I fell in love with her and her work.

The stand is made out of clay T&C and all together it measures around 24cms.

Its are real classic Ev - and so good to have all three pottery components all still together. That posterior-shaped cork is a 'tell' for her pots too, even it they aren't marked.

She was such an interesting and significant character in New Zealand studio ceramics. My own interest in her concerns her early modern movement pieces, before she became a pillar of the Anglo-oriental aristocracy. You are lucky to have that direct connection with her.

At some stage I might write something about modernism in New Zealand studio pottery, before the Anglo-oriental narrative established its dominance in the 1960s.

Well T&C I had never heard of that Anglo-oriental reference until I read Cone Ten Down by Moyra Elliot.  Yes I was aware of the Bernard Leach influence and could see this very obviously in many of my pottery idols works.  But to me our pottery kings all had their own New Zealand twist on things regarding clay that I loved and still hold dear.  Yes we were hugely influenced by Hamada and Leach and I am grateful for that, but I still feel that we found our own way with clay that is totally and distinctively different from anywhere else in the world.

I'm so glad you say this. I have often wondered what many long standing potters in New Zealand made of Moyra Elliot's thesis that the NZ post-war studio movement can be neatly delineated into 'Anglo-Oriental' or 'Modernist'.

I have always assumed some would be uncomfortable with such labels; and as with many things - stylistically, philosophically, in terms of materials etc -  our potters have always been positioned along a whole set of different continua which they may have traversed in both directions constantly over the course of their careers.

That said, I sincerely believe the Anglo-oriental/Modernist dichotomy can be a useful shorthand, or a conceptual simplification for understanding the studio pottery story in this country.

At the moment I'm interested in much of the stuff that can't be comfortably associated with the Leach-Hamada-Cardew et al. tradition, if only because the literature of the period (mainly the New Zealand Potter magazine) appeared to somehow not 'see' potters who were explicitly operating outside that philosophy.

There were exceptions of course - Roy Cowan and Juliet Peter are probably the best examples. Roy Cowan was a giant of New Zealand ceramics, but emerged out of an essentially British and New Zealand 20th century craft tradition that was genetically connected not to Leach or Japanese craft ceramics, but the Aesthetic and the Arts and Crafts movements; where a thing could be hand-made, beautiful and admired for its own sake rather than primarily because it was functional. Cowan bestrode our studio movement like an indispensable Saxon lord amid an insurgent and perhaps suspicious Norman aristocracy - the Anglo-orientals (sorry to keep using this term, but its the only one we've got at the moment). He was really only able to do so because he was an established artist, prolific writer, innovative decorator and peerless kiln and glaze technologist.

But Cowan and Peter apart, there are others who deserve to be known but aren't. For example, who's heard of Charles Bond-Smith? When Barry Brickell saw Bond-Smith's highly distinctive decorated high-fired earthenware and kiln set-up sometime in the early 1950s (well before the NZ Potter started its print run), he remembered thinking, "the New Zealand renaissance has finally arrived".

Incidentally, if anyone has information or objects by Bond-Smith and his Auckland pottery 'Terra Lucida' I would love to hear from you.

Sorry for this long post. There is a story worth telling here for the best reason possible - to inject more nuance and complexity into the broader narrative.

I think of New Zealand's modernist potters as falling under two broad banners:

1. The "Nieuw Zealand School" - those whose modernism or modernist periods find their roots in a continental mid century European education and tradition such as Simon Engelhart, Anneke Borren, Mirek Smisek (in the early 50s), Frank Carpay (as a ceramic decorator), Carl Vendelbosh, Theo Schoon, Theo Janssen and Peter Janssen etc.

2. The "NZ Craft Modernist School" - Those trained within a British South Kensington art school type aesthetic and tradition, whether in Britain or New Zealand - such as Cowan, Peter, Doris Lusk/Holland, Patricia Perrin (until about 1958), Jim Palmer (early in his career) the early New Zealand professional porcelain painters such as Nan Jakins, Maggie Hunter and Elizabeth Baird Luxton et al. (and a few later ones such as Peggy Laird) whom the ethos and philosophy of Leach and Hamada never touched or only until later.

The interesting thing about this story is that some moved one way - Perrin and Engelhart for example became immersed in the Anglo-Oriental philosophy and aesthetic, which having adopted, they never left. Others who were trained in the Anglo-oriental tradition, inured in it even, became iconoclasts and abandoned it entirely, seeking the 'cheap thrills' of extravagantly decorating non-functional surfaces - Warren Tippett being the famous example, but there were others. Moyra Elliott does a superb job tracking these philosophical currents and her argument is quite persuasive - as you would expect from someone who lived almost the entire story herself. One potter I would like to ask about his retrospective self-conception is Howard Williams.

But as ever, its not the whole tale, elements of which lurk ready for their day in the sun, or under a flickering artificial florescent pallor in a museum, as the case may be.

Please tea and coffee NEVER apologise for a long post. It is wonderful that you think about these things and take the time to record your thoughts and findings.

T&C my heart rules me when it comes to pottery, not my brain.
I only use the terms Traditional pottery and Art Pottery and both have their place in my world.
Moyra Elliot has wonderful skills when it comes to the written word, but I would honestly say that your skills are superior.  I am envious of you both.