This post is to slightly raise the profile of a potting couple whose work I have admired and sought for some years now - Simon and Tineke Engelhard.

As I mentioned in a previous post, the Engelhards were among a number of European potters (mainly from The Netherlands actually), who immigrated to New Zealand after the Second World War, and without whom, New Zealand post-war design, craft and art would have looked much different. I think of these artists and crafts people as forming a coherent and distinctive strand, especially in New Zealand ceramics, which I term for my own convenience "the Nieuw Zealand School of modernism."

But first I should make clear what I mean when I use the term modernism in contra-distinction to the term Anglo-orientalism in New Zealand ceramics. (Sorry Ev, I want to pursue this dichotomy for now).

I think of each object produced by human hand to delight, for utility, to create meaning, provoke contemplation, evoke atmosphere or shape lived environments as falling somewhere on a three dimensional continuum - the dimensions being visual art, utilitarian craft and environment-shaping design.

Whereas Anglo-oriental ceramics, at least those pieces infused with a purist Bernard Leach ethos, fall closer to the utilitarian craft end of the spectrum with a second order design priority and a third order art element; my view is that studio pottery that may be termed 'modernist' prioritizes the design element to some degree over the utilitarian craft dimension. Others may beg to differ.

Simon Engelhard arrived in New Zealand with his wife Tineke in 1955. Both had worked in the ceramics industry before coming to New Zealand. He appears to have immediately been employed at Crown Lynn, possibly as a thrower. He overlapped there with another eminent member of the 'Nieuw Zealand' School, Frank Carpay, by about a year. According to information in Douglas Lloyd Jenkins' At Home:A Century of New Zealand Design (2004), his experience at Crown Lynn was sufficiently demoralizing to put him off pottery for several years. He returned to it in the mid 1960s. Some of you will quibble that I am not drawing as much distinction between studio and commercial ceramics here as I should.

My view is that as one moves further away from the Anglo-oriental ethos, as the design imperative starts to exert its gravity and the need for structured, planned surface decoration increases in importance, the distinction between craftsmen working in studio and commercial environments begins to dissipate. The conceptual border Leach and Cardew et al. quite rigorously enforced between craft and design is abolished in modernist ceramics.

Lloyd Jenkins is worth quoting here:
[Simon and Tineke] created their works together, Simon producing the forms and Tineke decorating them with strong abstract designs, highly linear rather than organic in nature [(gestural or textured decoration was generally favoured by Anglo-oriental potters)]. This emphasis - fine, thin-walled earthenware and a preference for experimental, although functional, form - placed the couple at odds with most other New Zealand potters. Although the Engelhards' work became well-known, finding an audience that appreciated its originality was at times difficult. It remained an acquired taste... (page 201)

I had been keeping my eye out for Simon Engelhard's characteristic SE mark for a number of years before Geoff Perkins provided a number of pots for a small exhibition at Objectspace in 2009.
Two of the pictures from the exhibition are still available http://www.objectspace.org.nz/Images/Assets/2779/11/ and http://www.objectspace.org.nz/Images/Assets/2789/11/.

Geoff Perkins has arguably the best claim to being the grandfather of all of us collectors of New Zealand studio ceramics. He set about deliberately building his collection nearly 50 years ago. You can find a short explanation of his motivations in this http://www.objectspace.org.nz/Downloads/Assets/2186/OB063+To+Have+%26+To+Hold_fa.pdf from Objectspace. If Perkins recommends a potter, he is worth listening to.

In any case, here is the Engelhard. Hopefully I have done justice, as much as a poor collector can, to curating Simon and Tineke's ceramic vision. 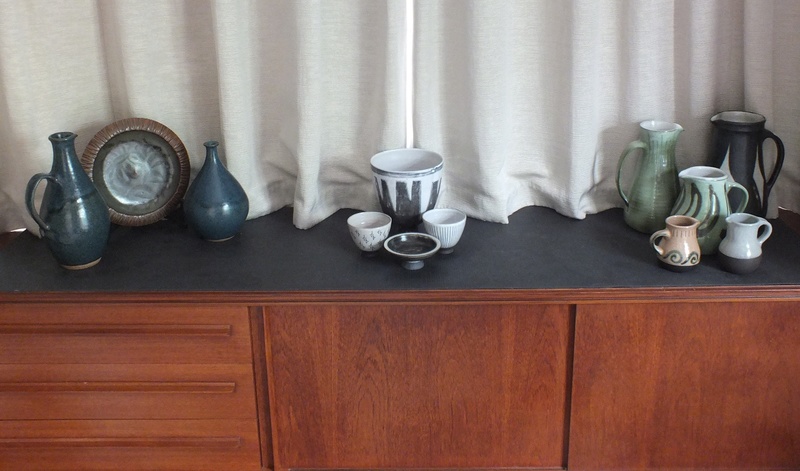 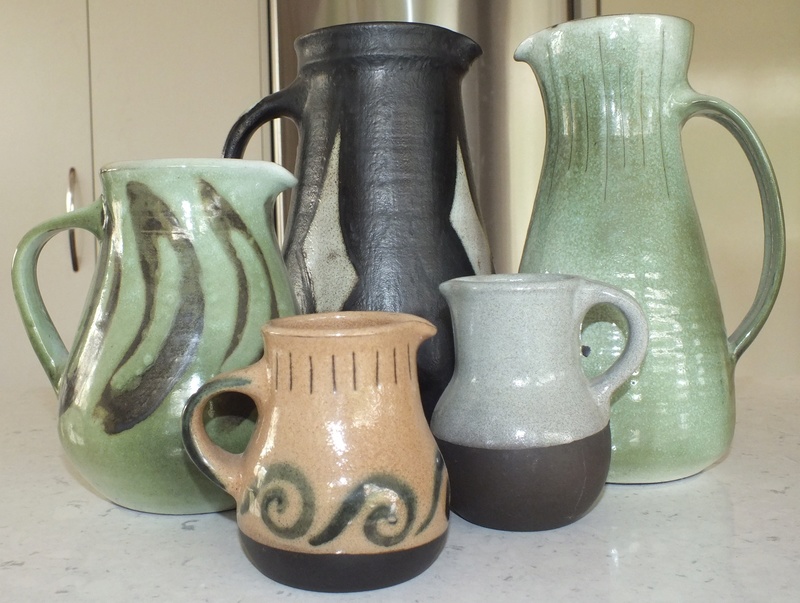 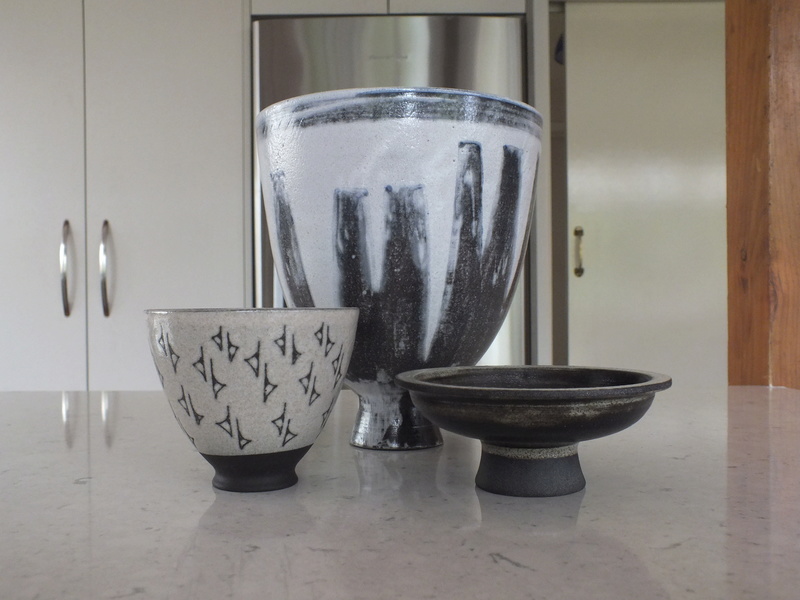 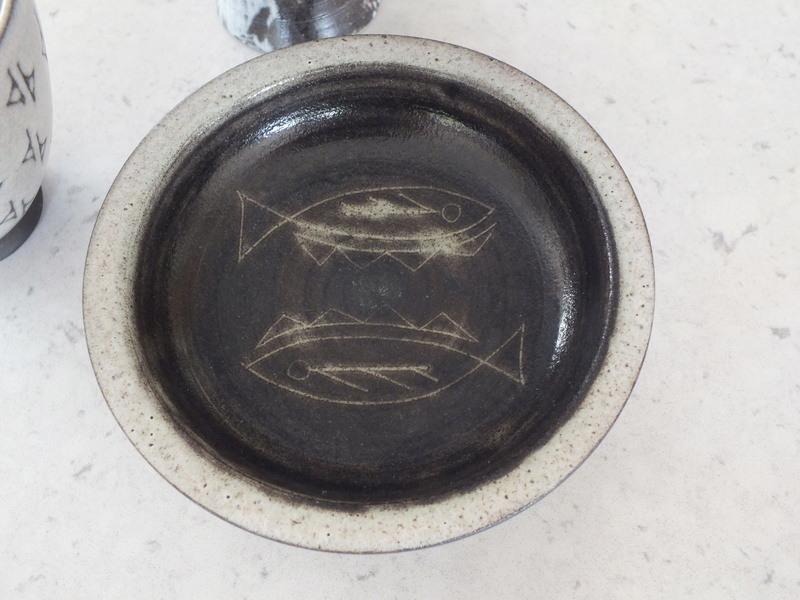 These almost Scandinavian geometric fish seem to be the only figurative motif the Engelhards used with any frequency in their earlier work. 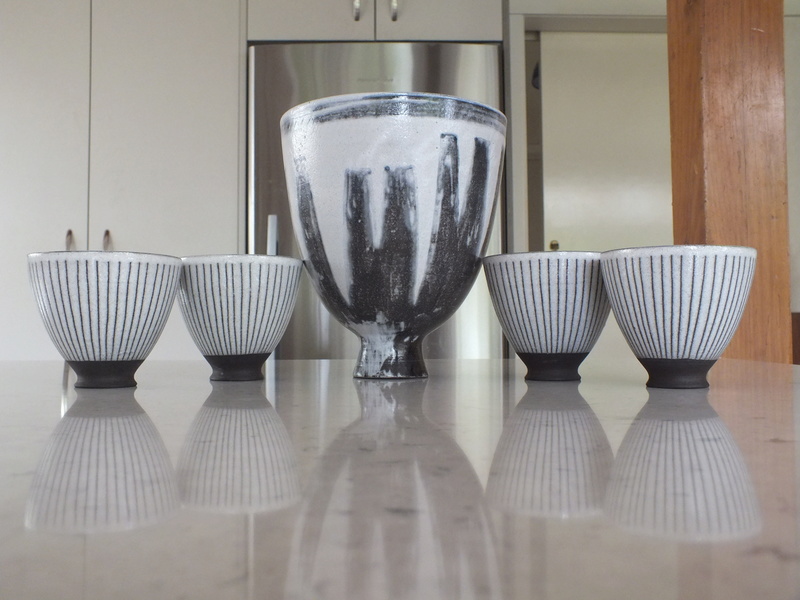 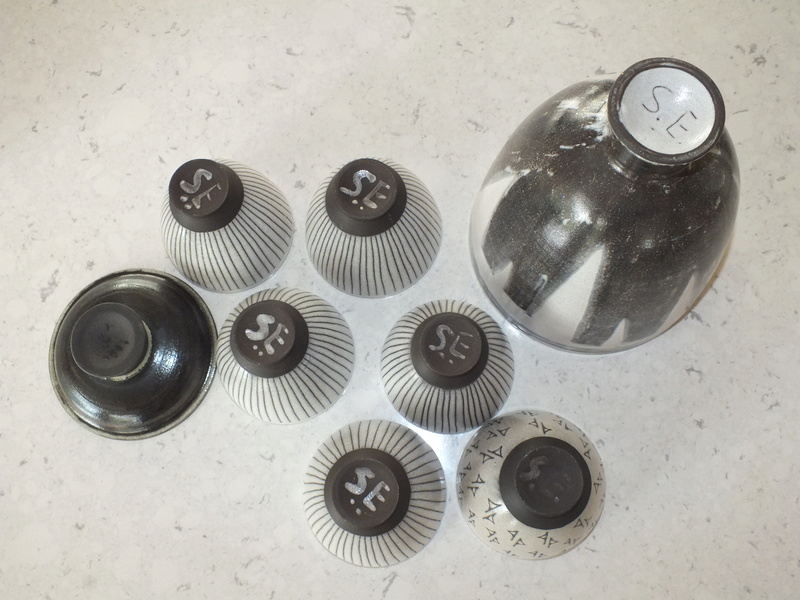 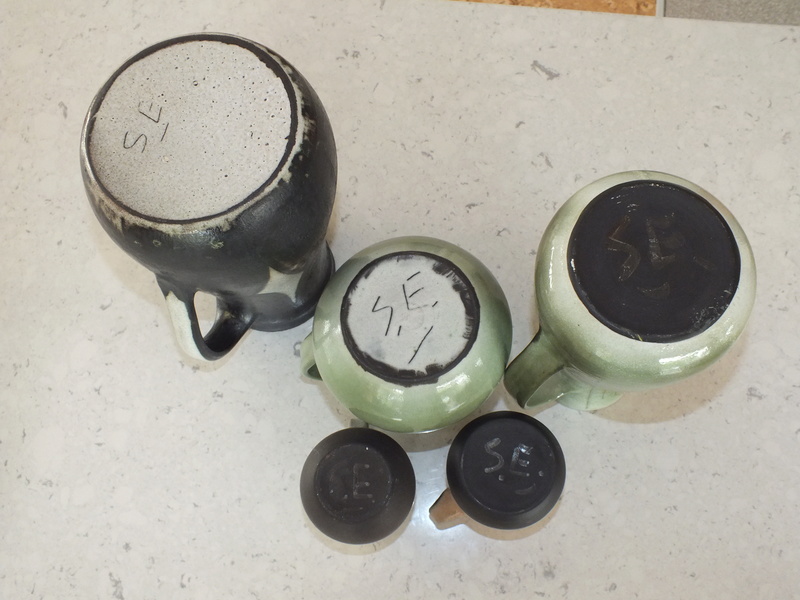 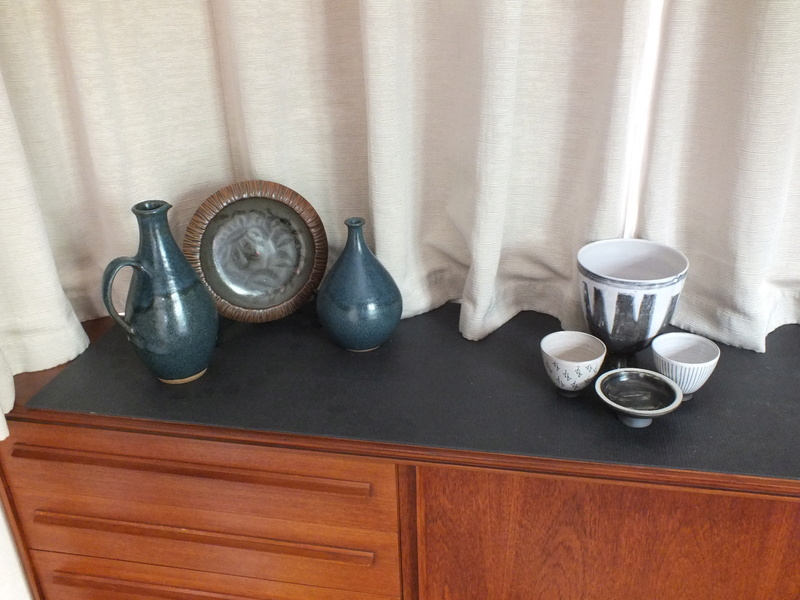 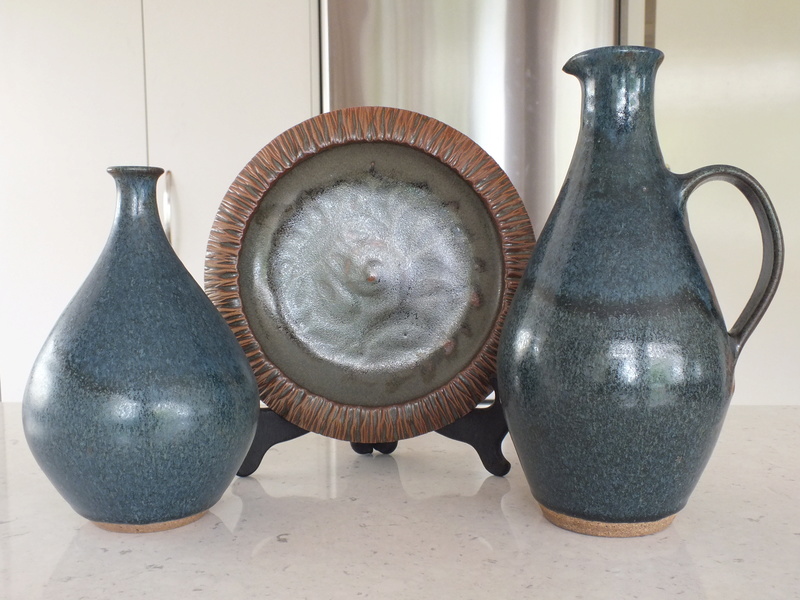 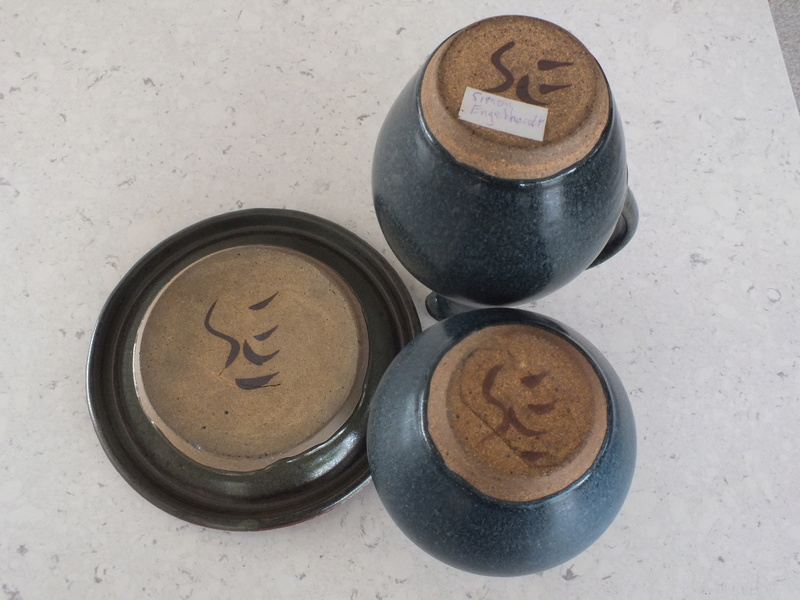 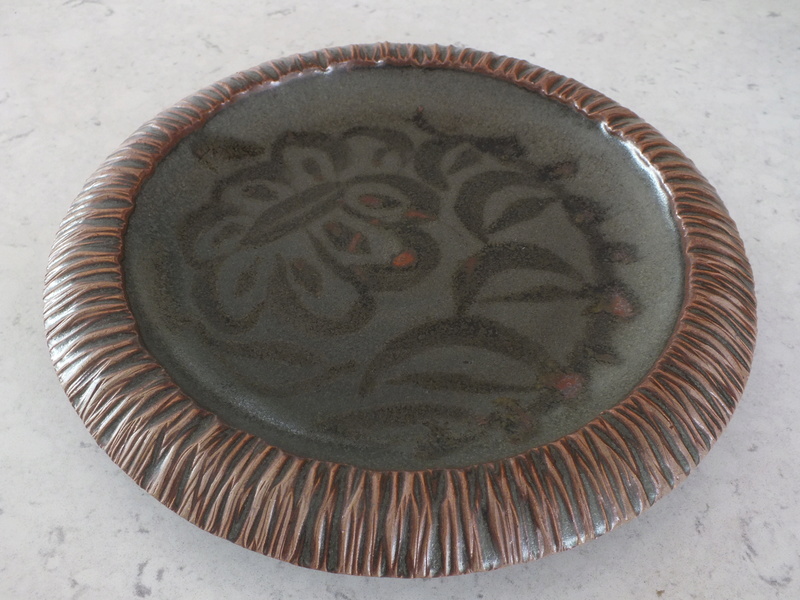 This unusual stoneware plate has a laboriously hand carved "bark-textured" border that likely dates it to between 1968 and 1972.

What a pleasure to read this interesting and hugely informative post teaandcoffee.
It reminds me of the old NZ Potter articles that I enjoyed so much.
Don't worry about me and my idiosyncrasies t&c ...
The decorations are unique and those striped pots are truly glorious.
Thanks for sharing this with us.
I know their work is collectable and watch it get snapped up on Trade Me often.
I will try to pick up the older SE mark from one of the photos to add to the Gallery if that is ok.

You're welcome Ev. Thanks for the positive feedback.

Thank you from me too, tea and coffee. Your writing plus those photos gives us an invaluable record. And interesting!

Actually Ev, I was thinking that there is an argument for Simon Engelhard to be included in the Crown Lynn Artists and Craftsmen section, or at the very least having his own sub-forum within the studio potters' section.

It would be interesting if someone could ask him about his work at Crown Lynn one day and if there was anyway we could recognize his hand in work produced.

He may be one of the few surviving CL workers from the mid 1950s and could have valuable information. (hint hint to Val...)

T n C I would be interested to have a chat with Simon.  Does anyone know where he lives or have a contact number or email? I have googled without success.

I think Tim Caulton knows him quite well. You could private message him and see if he could help you out maybe?

Tim hasn't been well for a few months now, so I would wait until he surfaces before contacting him.

T&C I will make a Forum just for Simon and Tineke when I get a free moment.

Simon and Tineke Engelhard now have their own Sub Forum -

I'm sure I had some of their work, but cannot lay my hands on any atm !!

I've read that Simon worked at Crum, but hadn't seen any connection to Crown Lynn until you mentioned it T&C, so it would be interesting to find out what he did there.

Marcus knows a bit about the potters that worked at Crum. I'm pretty sure he has mentioned SE in that context. If I see him at the ASP Big Clay Out today and he's not too busy I will ask.

The information about Simon Engelhard's employment at Crown Lynn is on page 201 of Douglas Lloyd Jenkins' "At Home:A Century of New Zealand Design". I'm almost certain he interviewed Simon personally for the book so this detail can be treated as fact rather than hearsay I think.

The Crum info is news to me and should be checked with Simon and Tineke perhaps.

I am sorry to hear that Tim Caulton is poorly again. He has fought a running health battle for nearly a decade now it seems. Hope he wins this round and can return to the forum sometime. His knowledge about New Zealand pottery is considerable and he has been a generous contributor to our collective knowledge over many years.