This is a treasure I have been seeking for a while now and as is so often the case it came my way by chance, suddenly and unexpectedly. As an added surprise it cost me less than a quarter of what I have previously bid for one on tm. 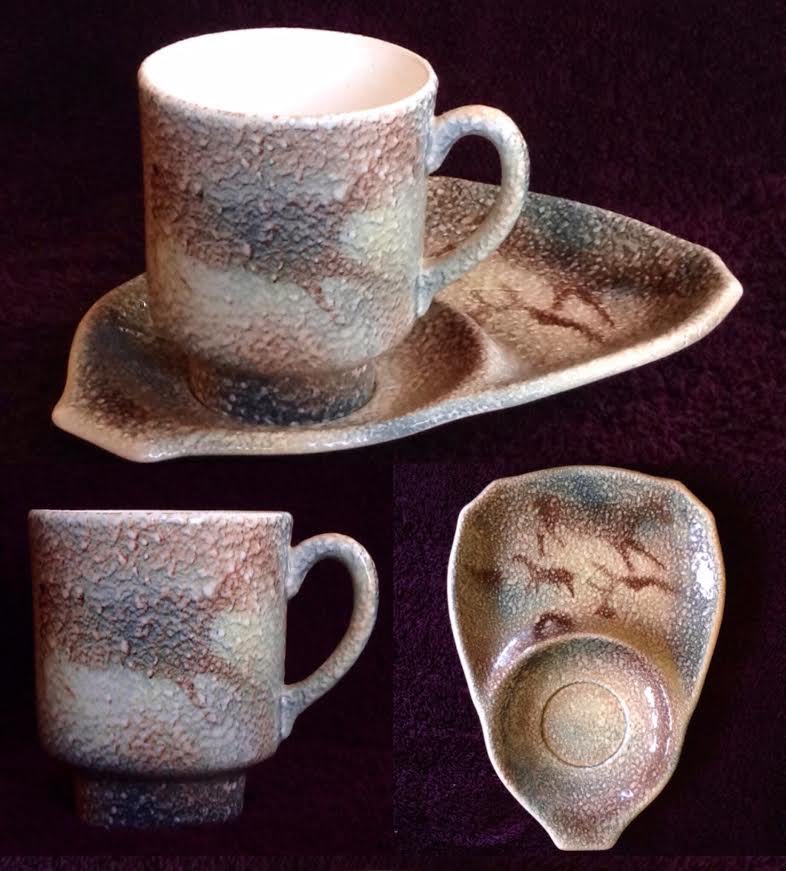 The set is not perfect as there is a chip hidden beneath in the footring of the saucer. The glaze on the cup is less vibrant than some but, as can be seen from the two saucers shown on the Titian site, there is quite a bit of variation in this sort of hand-finished work.

The Titian site records a tale that this tennis set shape was experimental and thus unnumbered, so I suppose it is likely that it was also only made in small numbers.

The stencils aside, the glaze appears to be the same as Titian Stonehenge glaze but I am reluctant to describe Titian's stoneAGE Lascaux Caves design as StoneHENGE because to do so would be confusing.

As described on the Titian site, the glaze gives the appearance of being rough, but, although it is not totally flat, it is really quite smooth. I did not appreciate this until I read the blog and then ran my fingers over the surface of the cup.

This is one of two Titian shapes that for me are must-haves, and (as I already have a Wahine mug) I now have both!!!
.

This was called a T.V. Set in the Paramount Ware negatives Jeremy.

Thanks Ev.
I think we have encountered similar naming with the CL sets.
Television started in NZ June 1st 1960. I can't see them calling it a TV set before we had TV so unless they changed the name that would date the set 1960+.
Are there dates for Paramount Ware in general?
Are the negatives dated?

Later ...
I see a reference to 1960s for Paramount in Finn's post.
https://www.newzealandpottery.net/t8089-titian-paramount-negatives#32257

Later again ...
The Lascaux Caves were discovered on September 12th, 1940, and the first images, by Ralph Morse, were published in Life magazine on February 24th, 1947.

Cameron Brown's cave painting stencil was not a reproduction from Morse's photos but a reinterpretation of a Morse image.

No they are not dated Jeremy, but going by the pieces in the photos there is some age to them.  Each negative is in an envelope with the number and name of the ware typed on the front.  There are three digit numbers also stamped on the envelope which must refer to something as they run in sequence and Finn McCahon-Jones has recorded these as well, in the hopes that one day he will find out what they refer to.

There were about 4 envelopes that had black and white photos of the ware instead of a negative.  It was an exciting adventure that's for sure!