Hi this piece is a large cup, the handle is a bit misshapen and the glaze uneven .. anyone know if its an NZ potter and if so who? 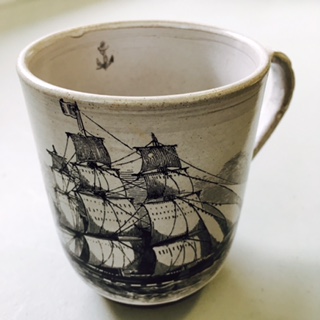 Pieces of pottery that look like studio produced objects, yet appear to have a transfer pattern on them always catch my attention. There can be something unexpected or perhaps occasionally jarring about the juxtaposition of an individually handcrafted and a mass production industrial process wrapped up in the one thing. I know it shouldn't be jarring - think handwoven carpets with synthetic yarn and dyes, or fine Maori carvings made of fiberboard - but in ceramics it sometimes can be, at least for me.

The look the potter(s) was going for here seems to be scrimshaw on a bone-coloured ground. Are you able to show a picture of the base by any chance Potlot?

There can be something unexpected or perhaps occasionally jarring about the juxtaposition of an individually handcrafted and a mass production industrial process...

Unless of course this is much older than I am assuming.

Milton Potteries made this sort of pottery with printed pictures in black and white.

Here is an example from Te Papa

Another is of a jug in this photo from the Otago Museum .. 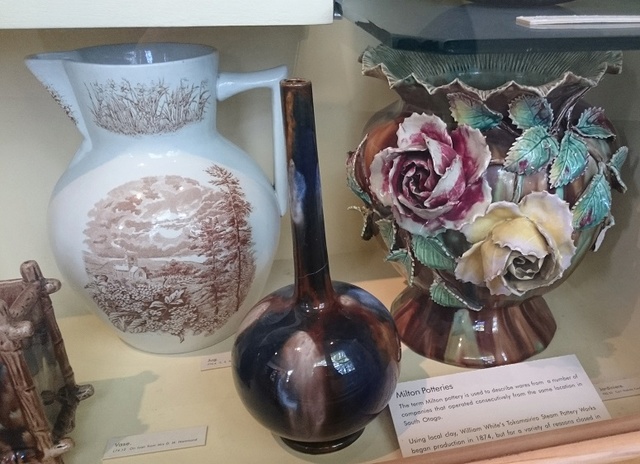 Potlot, teaandcoffee has asked for a pic of the base and I would like to see a full profile showing the handle clearly, if it's not too much bother.

Although this may look thrown, I'm thinking more likely it is a jollyed cup.

If you look at the rim of the cup, I seem to be seeing 'revealed construction' signs of wheel throwing which I associate with post-war studio ceramics, rather than more highly finished Victorian pots. The Milton tableware is likely to have been slip-cast isn't it?

Edits: Our posts crossed Jeremy.
This cup reminds me of a line of Piero Fornasetti sailing ship ceramics from the 1980s(?), which indicates these maybe were part of a short-lived fashion for this deco at one stage which could help with dating.

Yes it does look that way T&C.
That dribble of slip on the rim is very noticeable as is the excess ridge of slip.
Though the poster refers to this as glaze ....?
I would also like to see a side on shot and one of the base as well.

I have found only one instance of this engraving on the net so far.

The ship in the google image is described as a Caravel, which in turn is defined as a two- or three-masted sailing ship, esp one with a broad beam, high poop deck, and lateen rig that was used by the Spanish and Portuguese in the 15th and 16th centuries. This isn't a caravel. It appears to be a "ship of the line".

It is a Pinterest image taken from the New-York-based etsy store GraphicSense.
I cannot locate the image on Pinterest or etsy.com

I guess GraphicSense have lifted it from an old book, but what that would be idk.

I have asked the shop if they can provide details of the source for the image.

Unfortunately the google link to Pinterest arrives at a different image. I have posted a composite of the cup and the etsy image on Facebook:
https://www.facebook.com/jeremy.ashford.18