Latest topics
» Does Anyone Recognise This Spotty pattern Please?

» Hand Made by Daniel Steenstra

Warren Tippett will open his first exhibition in Japan in the Arts Salon of the Seibu Department Store in Tokyo’s Ikebukuro district on 11 August 1989. He will show about 50 pieces, representing a broad cross-section of work, from cups and saucers through to platters, bowls and vases. The selection will be drawn from current work and he will be in attendance for the duration of the exhibition. A year’s study of the language and three previous visits have given him some acquaintance with the culture.

The invitation to exhibit comes through personal contacts Warren has made while in Japan. He feels the Japanese interest in his work stems from a recognition of the effect traditional Japanese practice has had on him - “more in terms of concept than of style” - allied with a curiosity about some of his innovations on a traditional base. Specifically, he cites his use of slips and glazes developed for industry.

“This is the start of another phase in life’s learning process,” he says. It’s important that the relationship is reciprocal; this exhibition has been conceived as a stage in a developing process of mutual exchange of views as well as works. Some younger Japanese potters he has met are likely to return the favour by visiting and showing in Australia.

Japanese work Warren encountered early in his learning, he feels, gave him a freedom and it is gratifying to find now an appreciation of what he does, in return. In more general terms, he is attracted to the energy of Japan, the way people have adjusted to a crowded life in tiny spaces, the fact that everybody is busy – with no time to listen to those who complain about their lot in life.

Warren Tippett’s first experiences with clay were in Invercargill, New Zealand’s southernmost city, in the early 1960s. He was trapped in the tedium of a four-year-long apprenticeship to a signwriter, when he began attending night classes at Southland Technical College. “It was terribly unconscious – just finding something one could be involved with. With me, it was clay. Clay is the root of it all.”

He moved north, and with the aid of an Arts Council Advisory Grant, established his own workshop in Christchurch. It was in this period, 1964-65, that he met Japanese potters Kawai Takeichi and Hamada Shoji. Their work gave him “an insight into ceramics as a personal statement of self”.

The mid- to late 1960s and early’70s found him living and working in the country, on the North Island’s Coromandel Peninsula, making decorative stoneware pots for the local market and exhibiting regularly at Auckland’s New Vision Gallery. It was in Coromandel he first worked a woodfired kiln; later, he continued this involvement at Bethels [sic] Beach and at Albany, both near Auckland.

In the early 1980s, Warren established himself in suburban Grey Lynn where, with a small electric, he had time for some reflective work on lower-fired clays and glazes that made up a broad earthenware range. And this was where the real excitement began.

He began gathering work and holding Open Days, inviting friends and neighbours to view. This gave him the chance to live with his work, see it en masse, and to sell direct to the public – evolving a method and lifestyle which was balanced and wholistic. One which he has continued to practise since moving to Sydney in the mid-’80s.

Warren describes his work as “essentially domestic objects for both display and use: vases stuffed full of flowers, bowls groaning with fruit, cups that can bring a wonderful start to the day”.

The Sydney workshop is in the inner-city suburb of Glebe, jammed between the eating houses that part of town is known for. Here is a shop and work/living space space combined, where warren works a seven-day week, often 12 hours a day.

The pots are thrown in an old basement with a view out, through missing boards, to a lush garden. They are decorated at a long trestle table immediately behind the showing area and separated from it only by shelves. Firing is done in an electric kiln at the bottom of the same garden.

The works are displayed and offered for a sale in a gallery out front.

That the entire process takes place under one roof is an essential part of the way Warren likes to live and work. He prefers to remain involved with every aspect of what he does. Anyone working operates with preconceived ideas about the way ex things should be – but the works themselves may not conform to these ideas. And yet, over time, small imperfections, distortions of intent, variations, may cease to appear as such. They may even subtly enhance the work. “It’s terribly important I keep my work around me, so I understand what I’m doing and keep understanding it.”

His involvement extends right through to the sale of the works. Almost everything he sells, he sells personally - “it goes through that door” - and he thus sustains an intimate relationship with his market getting to know the people who buy his work.

He feels able to detect differences in the reasons people buy. Sydney people buy more to give away to friends, while in New Zealand, where people tend to have more personal space and live a more home-based life, they are inclined to make their own purchases. In Japan, “people are very connected, centred . . . they buy for themselves, they are collectors.”

There are, of course, problems involved with living, working and selling under the same roof. For a time, the door to the gallery was always open during shop hours, allowing the distraction of casual passers-by. Now, with the installation of a doorbell and a notice, only those with a definite intent are likely to ring.

The philosophic basis of the work is to do with balance, harmony, unity. Warren eschews any attempt at categorisation: “Nothing to do with post-Modernism, nothing to with fashion, nothing to do with anything – very basic, very traditional, not new at all. And it fits in happily all over the place.”

He says he is anti-ethnocentric, but allows an indigenous character to his decorative style, which he says is Polynesian if it is anything other than a personal expression, like handwriting.

But it is also to do with understanding and using skills. :”I went through a learning process over the years. I borrowed so much from so many people – which is why I have no problem if someone wants to borrow from me. What I’m interested in is my own skills. You have to accept you do things in a certain way, not get concerned about what you’re doing, but accept your own interpretation and hone your own skills.”

As to the further destination of the works, he characterises the relationship of the buyer to the work as like his own. Ownership brings out the last stage of the work, completing but not finishing it. A work goes on into another life, of beauty and use – a life of its own.

This same guiding principle he will take with him to Japan, which he hopes will become his third market, after Australia and New Zealand. “You don’t go there trying to change things. You’ve got to realise that the little bit of work you do is as much as you can do – then find a place for it. I’ve never wanted to be big, never wanted a chauffeur. What you get from work is the opportunity to keep working. It’s about going on – forever – into the areas you want to go into.”

Excellent thanks Tony!
So insightful and down to earth, a true artist.

googling in time I found that Al Seconi was the cameraman for Mary Debrett on a TVNZ doco on Warren Tippett. Does anyone know when this was and whether it is accessible via the net?

I have a Warren Tippett DVD that has 2 discs and one title says Kalidescope.
I wonder if that is the TVNZ one?
It's been quite a few years since I've looked at these, so I will check it out.

Phew I'm so glad I have some of Warren's work, but I would love to have more after watching some of the films.

The 1978 Kalidescope clip was of Campbell Hegan talking to Warren as he threw a porcelain vase then ribbed it in his typical style and continued to shape it. He also decorated a porcelain bowl.
Albany Village Pottery in 1977 with Ian Smaill taking us on a visit to the three chamber kiln that he and Warren built and shared.

There was a Photo Album that covered his life from Christchurch including Hamada.
Then Coromandel and Colville. Barry Brickell and Driving Creek.
Albany days and pots.
Grey Lynn, Prime Road Open Days .... bright colours on these pots. 1980 - 85
Then Australia and posters and pots from his workshop at 91 Glebe Point Road, Glebe.

An hour with Moyra Elliot from his exhibition in 2006 The Greatest Show. Filmed for posterity thank goodness.

There are many more clips to look at ....

There were no acknowledgements to any of these clips. Just headings.

That DVD sounds fascinating. Is it commercially available?

I also have a DVD on Chester Nealie.
I got them several years ago from a contact at a New Zealand Potters Conference.
I've never seen them advertised, I guess I was in the right place at the right time.

This is the planter Martin has. 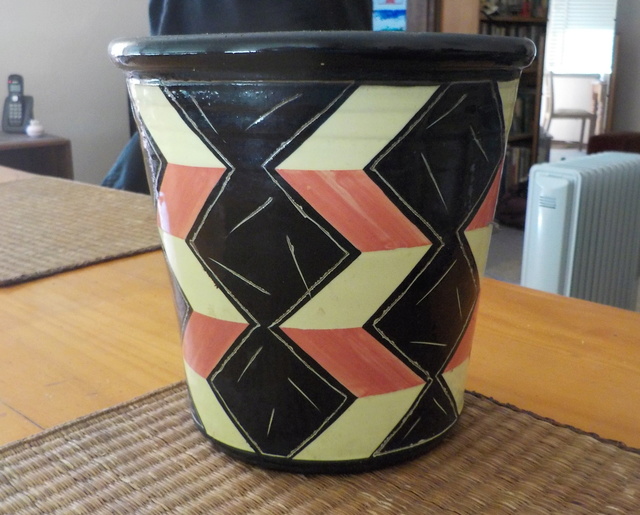