As I'm on holiday I was able to visit the Crown Lynn Museum on Saturday to do some research.  I headed straight to the Production Records to go through them thoroughly.  I'm not sure how good their record keeping was and they range from the 1970's to 1985.
Each shape has it's own card and quantities are added with the date, so it is easy to total them up.  Some shape numbers have no records and are blank, so I can only deduce that none of those shapes were made.  Some shape numbers don't even have a card, so I don't know what was going on there.  Here are some examples to show that this interesting exercise was worthwhile.  More to come when I have more time.

Starting with the Four Digit Swans as these figures are very interesting:

Interesting stuff Ev!
Fascinating really,.. there must be more than 65 baby swans out there..
Its odd there are no products 1210, 1218 & 1219 at all?? as 1219 has a gallery description of 'Coffee mug for bottom banding'
If they only made 6 Elf eared mugs its amazing Jeremy even found 1 surviving.

Thanks for your hard work there, Ev. You are increasing the value of my castware mugs collection.

Hard to believe only six 1191 elf ear handle mugs were made. I guess $20 was a bargain then.

As for the 1110 Maori mugs, I have seen at least 3 of the ten as two appeared on tm the week after I paid a mint for mine. What sort of coincidence was that.

And at 67 it looks like there may just be enough 1137 Roots & Leaves Mugs for you, Ev, and I to have one each when they turn up.

But I don't fancy my chances of seeing one of the 1155 Drinking Vessels, although at least I know what they look like.

So, that leaves the 1158 Beer Stein (9) and 1223 Inns Coffee Mug (6) to look for along with the few already identified that I don't have, and those stray 14xx shapes that have yet to be identified.

Kat, this is the record for the 2065 Baby Swan not the 154.
I may have only seen a couple with the 2065 on them and one would be Heathers'.
The same for the 2066 Large Swan as I could count them on one hand.
It's good to see that the Middle Swan follows the similar quantities as the other swans, but nobody wants to believe that they only made 40.
I'm not sure what to do with the shapes that have no production records.
Perhaps note this on the shape or remove it altogether?
I did find quite a few production records for shapes that we don't have in the later stages.
I will add the shape to the gallery at some stage and add how many were made.  Some had quite a few!

Jeremy, I want to let you know that there are no Luke Adams records in these Production Records. Hopefully I will come across those in the future as I still have many Archive boxes to go through.
The Honey Glazed Mugs had enormous quantities made for example the 1111 Star Medallion Coffee Mug total was 545 and some carried over to two pages.
Yes it certainly gives me a better chance of finding the Roots & Leaves Mug

I don't know if these records also include the trial runs, as I've come across a record of 2 for something and there are a few 6's, which would make sense if they were trials.
We need to look for more of the 14xx shapes that we don't have and I will probably add the shape numbers to the Gallery with the totals made, as some are substantial. It's great that it gives us a guide to these and the ones that were never made by the looks of it.
There is still a lot more interesting info to share and I'm not even a third or the way through the records yet. I will be going back on Saturday, as I'm still on holiday then.
Tomorrow is a visit to the Auckland Museum Library

I may see you Saturday then Ev.

I am supposed to be in Auckland then and Te Toi Uku is on my touring route.

Couldn't go to the Auck Museum today as dog had to have a split nail removed, so here are some more figures:

These low figures astound me, as they look like a Studio Potter's Production records.
Hopefully the Flatware and cups will keep the factory going!!

First auction is for one mug at $45 and gives measurements and number:

Second auction is for two, and although number and size are not given they look the same as the first in side-by-side photos:

Ev I agree that these numbers do not make sense. Maybe this card system was trialled then discontinued. Or test runs were recorded on these cards.  More likely.

CL was a mass production factory. Eg they would surely have made more than 12 Ford Sierra steins!  Let us assume that a stein was given to each purchaser of a new car for a certain period. A week?  Unlikely. Or that they were given to dealers at a conference.  12?  And there are lots more baby swans around than this record suggests. Surely more with 4 digits.

I think more will be revealed the further I get into these records Val.
I'm only highlighting some of the things that interest me, or things that we are looking for. 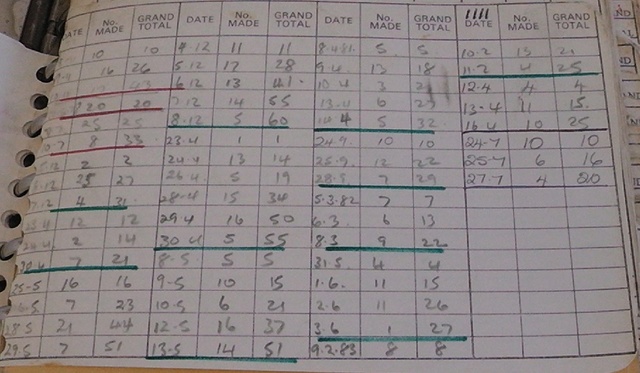 While CL, in Auckland, may have only made six 1191 elf ear handle coffee mugs we may see some more in time (sure, a long time) because it appears that this shape was first made at Luke Adams in Christchurch.

Should the shape be crossed off that list or not as every other piece we know of is in one of their unique glazes, Lucow and Basalt?

Oh to see one in Lucow!

Jeremy and I made a lot of progress on Saturday and I enjoyed his astute abilities when it comes to shapes and numbers!

I finished processing the first book of Production Records and started on the 1971 Stocktake records.

Jeremy delved into the second book of Production Records and came up with all sorts of information.  I'm really keen to get stuck into this book as the Index shows it must be the Crown Lynn, New Lynn records as it covers Castware, Flatware, Cups, Basins, Jugs etc.  The first book only had Castware and Vases.  I'm keen to check out the swans to see if any were made in New Lynn as well as Takanini with four digits, which I never thought to look at on Saturday.

There are quite a few numbers that we have no description that were made in the latter part of the 1980's, so there are still plenty of shapes to find.  It's all ever so interesting !!

Jeremy had a good look around in the Archives room and found all sorts of amazing things.   While I was showing Jeremy around in there I noticed a pile of folders marked Patterns that I've never noticed before and I can't wait to see what they contain !!  Jeremy found that about 10 of the File Boxes that I haven't touched yet all contain rubber stamps for patterns.

A new Director for the Museum will be starting in April, so I will have to wait until then to do any more research, as I'm back to work tomorrow.

So, Ev, are you happy with your comclusion that one book will be New Lynn and the other Takani? If so then that is a good result. Just need to find one for Luke Adams now!

I was interested to see that castware was being made at both factories. There are conclusions to be drawn from that. Dividing the shape mumbers into where they were made can be done from a single photo of each page, rather than one of each card.

We have been told that Titian continued to single fire so, assuming New Lynn continued with separate bisque snd glaze firings, the glazes from each factory could be distinct in the same way the Adams ones are.

I would like to do mre digging but that culd be difficult with me dwelling in the provinces. It was fun.

I had heard that the Takanini factory just made mugs (honeyglaze) and vases, but of course they made a lot more than that.
I have processed all of the photos I took and labelled them by shape number and this gives me a clear idea of what was made where.
I will take pics of the whole index on every full page for reference, even though there are blank cards for shapes that were made at the other site, it's a good idea thanks Jeremy.
I am busting my britches to get back to the Museum .....