I have a white monogrammed dish do you think this is a first class one? 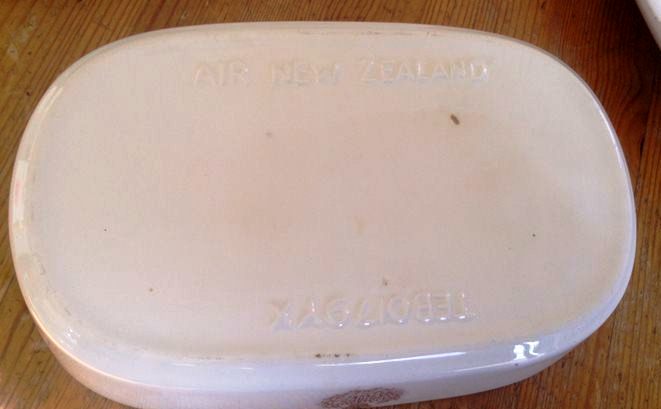 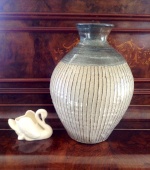 Nice dish but rather confusing with Air New Zealand embossed in one photo together with a strange code and what looks like the insignia of RNZAF in the other?

Oh is tht what the monogram is ! Id been sitting here with my magnifying glass trying to work it out. Apparently the numbers are the flight numbers?

Jonno do you think the RNZAF museum would be able to confirm the insignia? When I look at the other ones on this site, the crown is quite different.

Could you please translate the flight number bopmum as I have records of flights that they belonged to....
I've never seen any white airline crockery before, expecially with that insignia on !!

Yes it's TEB0179YX, Jonno made a good point what is the RNZAF insignia doing on a airnz dish?

Surely they would be a serial number of some sort associated with the aircraft they belonged to rather than a specific flight number? There seem to have been plenty of Air NZ dishes of various designs, with that particular serial number listed on TM and elsewhere.

TE stands for TEAL which was the name before Air NZ, which kept the old prefix for years after.

Yes I think so, the RNZAF museum they were very helpful when I asked about another plate some time ago.

It's all rather puzzling, but those numbers are for a small casserole dish, shape 8518 which belonged to the Boeing 747 and were first made in 1980.
All of the Air NZ crockery has the heading AIR NEW ZEALAND NUMBERS.

I think this is shape 8518 ev, it's measurements are 17x11 cm's. I emailed RNZAF museum, to confirm their insignia.

This is the email I got back from the Museum,  definitely a RNZAF crest on a AIR NEW ZEALAND dish,  while inconclusive, its certainly possible,  anyway I don't collect this type of Crown Lynn so I will list it on Trade Me so a collector will be able to enjoy it.

Thank you for your recent enquiry regarding the Air New Zealand ceramic with the RNZAF crest.

We have not seen one of these before and so one of my colleagues  sought to opinion of an expert in this area and his response is below. A little non conclusive but I hope this goes some way to answering your enquiry.

Please let me know if I can be of any further assistance.

At first glance the dish is similar to those in use by Air NZ during the DC-10 era (approx. 1973-1982). It was made by Crown Lynn and the number on its base assists with this identification. The Air NZ dishes were dark brown in colour with a black Koru. I have some.

An educated guess: this bowl came from a Crown Lynn bin of AIR NZ leftovers, was re-coloured and given an RNZAF badge. Certainly a collectable.

What is curious is that the they say that the dishes were in a DC10 era where as Ev you say its for Boeing 747's so I'm not sure about that.

Well the brown dishes were for the dc10's.... I'm only quoting what the crown Lynn records say. Heck it was only 33 years ago so someone should know.

bopmum wrote:
An educated guess: this bowl came from a Crown Lynn bin of AIR NZ leftovers, was re-coloured and given an RNZAF badge. Certainly a collectable.
[/b]

I just want to clarify that this educated guess is not really possible, because when a piece is glaze fired it become almost impossible to add another coat of glaze as there is no absorption.

Research shows that the DC8's first class had the turquoise with whale tail from 1965.
The DC10's Economy class had the brown with koru crockery from 1973.
The first Boeing 747 arrived in NZ in March 1981 ...... and Crown Lynn made some dishes for Boeing 747 in 1980. [These dishes had your main meal in them.]
I have one of these dishes in the brown glaze with the koru and it has the same numbers on it as this white one.
Still nothing conclusive ..... but I can only guess that there was a special run for some occasion involving the RNZAF ..... ?

I wondered about the recolour, I was looking at the dish yesterday thinking there is no way this has been recoloured, and I also think that it was made for a special ocassion either never happened or no-one nows about or that maybe it was made as test piece to for the RNZAF? In any case it was kind of lucky they didn't produce it in that colour for AIRNZ as its colouring has not stood up to the test of time!

Yes I noticed the discolouration and thought that it must have been overheated at some time, so it's definitely been used hasn't it and heated like aircraft dishes......

Yes has been used quite a bit by the looks of it. I haven't got a brown one to compare it but I feel its quite light in weight, are the browns vitrified?

I'm not sure as they don't have vitrified on them, but usually commercial crockery was vitrified. These were made on the Ram Press machine.

bopmum wrote:Yes it's TEB0179YX,  Jonno made a good point what is the RNZAF insignia doing on a airnz dish?

TEAL, and Air New Zealand used to be based at the Whenuapai Aerodrome, also once known as Auckland Airport.

It was then, and still is, an RNZAF base.

As a Whenuapai girl my (late) Mum worked in the NAC/TEAL cafeteria/canteen in the 1950s. There she met my (also late) Dad, who headed the RNZAF motor pool.

Dad's best story is from a bit later. When the Beatles arrived in NZ they were whisked away from the crazed public, into Dad's care. They were "nice boys" he said.

I have no idea whether the Beatles arrived on a commercial or Air Force plane, but you get the picture: there was some cross-over between the two occupants of the airport.

That would appear to make nonsense of my story as it gives a very small period of time when Air New Zealand, operating under that name, and RNZAF shared the same airport, but it was fun telling it. Read on.

This dish then was produced long after the Air Force and Air NZ shared the same address but may have been produced for a special occasion on which their earlier association was remembered.

How about this one:

40 is not a major anniversary but maybe Air New Zealand needed a bit of a pick-me-up in the wake of Erebus (November 28th 1979).

I wish I had one of these dishes!

BTW What does an 8500 number indicate?

Interesting reading Jeremy and I can relate to a lot of that history.

Your Mum & Dad may have been able to fraternise but I can assure you that NAC passengers could not . The RNZAF were quite security conscious on all the occasions I flew in and out during the 3-4 years before Mangere was opened.

You have also reminded me of this incident at Mangere which occurred about 3-4 days before I flew out on my first ever overseas flight in another Air New Zealand DC8 with the wreckage still on the tarmac. A little sobering I can remember.

The Air Force Insignia on a white ANZ dish is/was/could be an experiment at Crown Lynn
and may well be a one off. Lovely puzzle.

I have posted some comments on another thread that relates to this mystery
Jeremy wrote about NAC/ANZ and have a 747?

I seem to have a problem in getting this on the correct title??

Jonno, could be there was a difference between how staff, locals and VIPs were treated vs ordinary airport customers.


I started at Whenuapai Primary, adjacent to the airport in 1963, and recall security being pretty slack at the time. There was an open gate between school and base. Dad would occasionally pop into school for lunch and pupils seemed to have free reign of most of the airbase (obvious security areas excluded): some after all lived there. We used the pool for school swimming and cinema seemed to be open to all. Air Scouts was held in what appeared to be a barracks building. These are the same years you refer to.


We also used to cut across the airfields on the way to school, although that would have been after Mangere opened as I was probably about 10. I noticed security beefed up a seriously in about 1970 and it was hard for anyone to get through the gates unless on official business.


I guess if you were commercial passengers there must have been some security process for driving into the airbase, but I did not take any commercial flights until the International Airport opened at Mangere, so I know nothing of that. As an air scout though I got to fly in an Iroquois and a Bristol Freighter.