» Temuka but what is my name

The cans for these three duos were sold to me as "Viking". I accept that.
Cook & Serve saucers are usually just marked "Cook & Serve".
The exceptions, to my knowledge are those for handpainted cans,
which have the same stamp as the can, saucers for Athens,
marked "Athens", and black saucers marked "Viking".

"Viking" duos: are these the Viking colours? (Middle can is brown.) 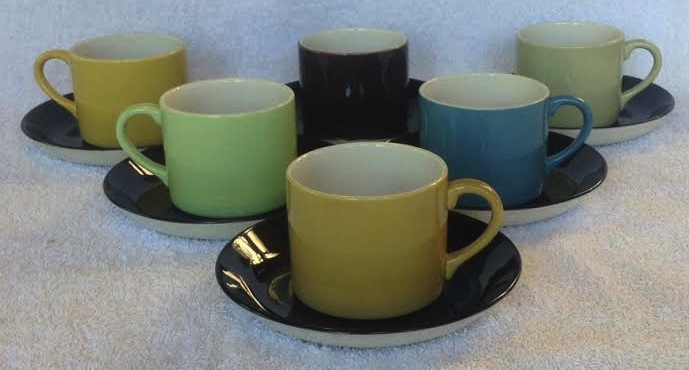 These are all the colours I have. Two different yellows.

Brown "Viking" cans on "Napoli" (?) brown saucers. Just because I can.

None of the coloured cans have backstamps.
Impressed marks are visible on some.

Jeremy, so is it just the saucers that have Viking on them?
Are they all the same colour ..... the saucers I mean?
Is there a number to go with Viking?
I would really like to see a photo of the base please.
Thanks

I have saucers with 6 distinct backstamps: four shown. 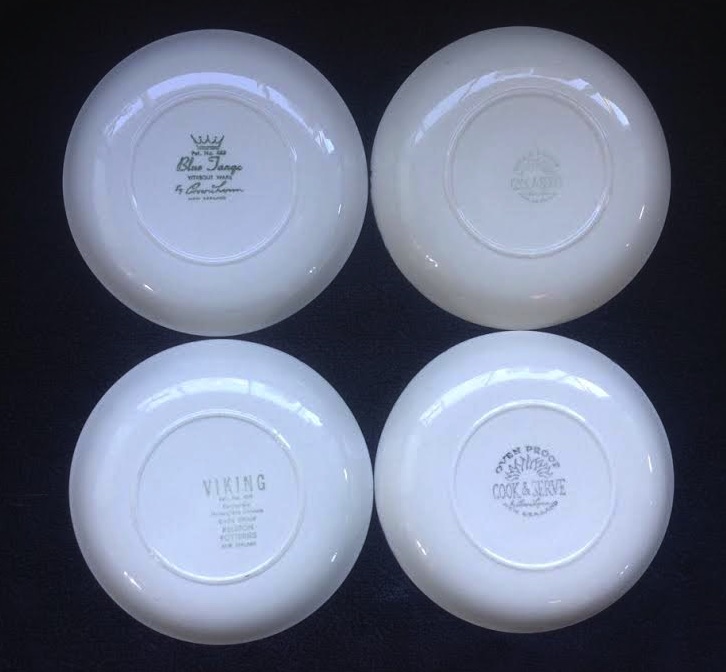 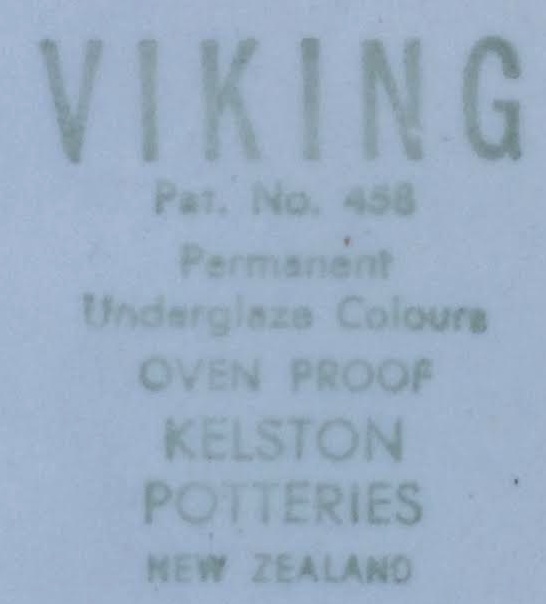 I have only black saucers marked Viking.

I wonder what Viking 458 pattern looks like? I don't thinks its a plain colour, it must have a design....
Especially is the saucer is black...

I think it was nearly twenty years ago I first got the inkling that Viking was a harlequin set, and nothing has turned up in that time to contradict it, search as I might for a Viking pattern. My most recent Viking purchase came with the claim that the cans were Viking too, even though they have no markings.

Thanks to the forum I now have no coffee can patterns without names. (And just the one saucer pattern that I'm still pondering.)
But, patterns are still turning up that I don't have, Janice, such as the Focus not so long ago, the plain white cans, and the odd new colour.

I think the number 458 would come from the early 1960s.
In sequence it follows Allegro 456 and Image 457, the last two of the hand painted designs so a named saucer is appropriate for the time of production. And if it were to have a pattern then perhaps a handpainted one should be expected, however it is a totally different style of backstamp indicating a different product range.

umm... Could be so as i too have some cans , just plain coloured... putting them with a black saucer would be an easy match... There are still heaps of patterns out there

When I see the range of patters you have in Shape 25 (both 3012 and 3019) I think yes there must be more patterns, but then again the 782 coffee can was SUPPOSEDLY replaced as a shape in 1968 that gives just a five year period for "original" patterns.

I don't know when Sapphire appeared on a 782 but it is easy to imagine that it was at a time when Crown Lynn was reducing its backlog. It is a bit of an odd one out.

When the new can shapes arrived in 1968 a new set of patterns was used, the Candystripes, the psychedelics (3023 cans), and all those unnamed patterns on the wide footring earthenware can (3022). The only one to turn up on the 3618 vitrified so far is Reflections: will there be others?

Focus is also an odd one as it appears on both shape 25 and 782 cans. Sparta is another pattern that would look right on a can. Given that there is already an Athens on a can it seems likely, but then again is there an Athens on shape 25? I will have to check over your Shape 25 collections ... and try to imagine them on cans.

Thanks for bringing this to my attention Ev.

My guess is the cans are round handled "3038"s. They ARE earthenware.

This set is mismatched and it is not Viking, unless the cups were sold as a later version of Viking, but even then they would have had the proper saucers.

I'm basing this on the backstamps shown, which are only one duo. The picture is dark and I cannot tell whether all the cups match in shape, or whether other saucers have Viking stamps rather than the Cook & Serve shown.

Later.
Sellers says same size as Mogambo etc but gives a height measurement of 7 when the vitrified cans are just over 6 high and 7 OD.

coloured cans: some must be Viking but which?

I saw looks of surprise at the Swap Meet at the number of cans I had, which of course was only a fraction of the collection.

With Nicole tidying me up things are in better order than ever before so when a fellow collector asked what coloured cans I have I took the opportunity to add them up and photograph them. The photo is not everything. There is one brown can missing at the moment and my single Reflections can (mushroom) is elsewhere.

But I still only have six Viking saucers!

The coloured cans may be rarer than some of the patterns but it is really hard to know as they are less visible, easily confused with other can shapes at a glance.

So that makes 8 different colours.
I must check to see what I have.
Keen to see if all of these colours have matching saucers and what is stamped on the base.

Kay Abraham agrees with me that what I have called yellow above appears to be two distinct colours very similar but comparing them one could be called Primrose perhaps and the other Chrome yellow, so that makes nine colours.

As for colour matches, the only cans we have found with perfectly coloured saucers are dark brown, and the Cook & Serve mustard yellow and Tango Blue.

We have seen neither black cans nor white saucers.

White and lime green cans both came on Form saucers.

Apart from the saucers for Mexico, nothing has been found in red.

I assume mushroom cans are Reflections as I have the matching 792 Reflections saucer. Lucky Kay has two cans which she can use for her harlequin "Viking" sets (but no saucers).

I think the oyster cans must surely be a proper Viking colour. One or both the yellows too as nothing else has appeared for them.

Brown is confusing. The cans and saucers match but that may not indicate an original pairing. Kay has split her Napoli set between brown saucers (3) which match the colouring on the cans, and green (3), which they came with.

We are still working out our swaps but FYI, Ev, Kay has a spare green saucer. I do not have one in sound condition (mine is oxidised), but would be happy to forgo that for your Napoli can, as I'm okay with my two brown.

I have only one (6) set of Viking saucers and Kay has two, but I have many more coloured cans. I think overall Kay probably has more 782s and 792s than me now, and, unless there is another major collection out there, likely the most complete, especially after upcoming trades, although I think I am the only one with Conifer cans, and saucers in the Reflections and the blue Reflections-type pattern.
.