As an architectural historian I make a point of collecting sundry objects related to my area of interest, NZ architecture (mainly domestic) around the turn of the twentieth century. I have furniture by 3 Auckland architects from that time and a guache painting by another. I also have some ceramic representations of buildings.

Crown Lynn produced a series of whisky bottles (originally full), I understand, for 1st class passengers. (If anyone can add info or correct me I would be grateful).
I see them around now and then but prices can be high, probably more so if they are full. I think there were four in the series, hopefully more. I did make a point of buying one because I had studied the work of the architects responsible for the building it took the shape of: the Ponsonby Fire Station in St Mary's Road, later Plusone restaurant. The building dates from about 1905 and was designed either by Goldsbro' and Wade architects, or Wade and Wade architects The main fire station in Pitt St was originally built in the same style. The bottle measures 90 x 40 x 30mm. Another in the series was one or other of the two two-storey cottages that confront you at the top of Curran St, on Jervois Rd. I forget what else there is.

Along the same lines I have acquired salt and peppers with transfers of the centennial tower, the most appropriate shape for a tower I think.
Another building in pottery which I am extremely proud to have found is a representation in bisque (marketed by Milne and Choice) of the main building for the 1913 exhibition in Auckland Domain by Bamford and Pierce architects. Although it is not NZ-made I would be happy to show it if there is any interest.

I have friends who collect ceramics with pictures transfer images of NZ locations and buildings. Most were made overseas. Is there a place for those in this forum? (or just NZ-made)
Jeremy 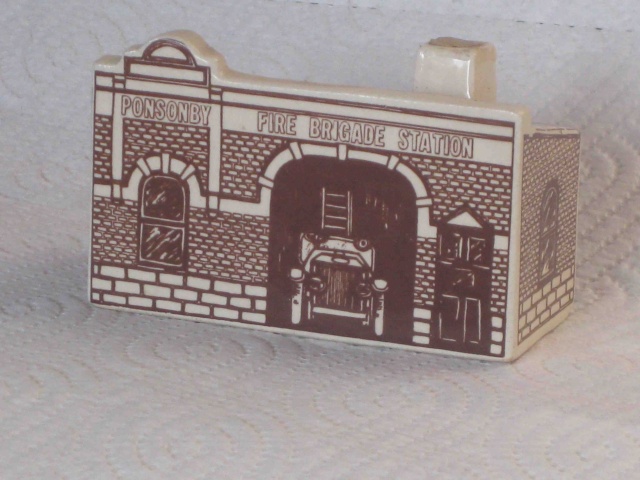 HI Jeremy, we have a couple of links to the First Class Air New Zealand liquer bottles and I have the butcher one..here is one of the links I found, maybe we need to amass to one topic...
http://newzealandpottery.forumotion.net/kiwiana-f39/air-new-zealand-mini-buildings-t108.htm

Thanks for all that Heather.

I note that the bottle for the Waipori Hotel uses the blank for the firestation.
I believe the originals will have been real buildings, the latter to make up the 13 I don't know.
I've just checked "Urban Village" a Ponsonby history by Jenny Carlyon and Diana Morrow. Photo page 31 shows the bottle is a fair representation. I'd like to see more bottles, try and identify the buildings, should they still exist or a record remain.

A link about the miniatures for you Jeremy...
http://www.airnzhouses.com/index.html

Been there done that, now.
Great site: I've emailed Graham

"I have friends who collect ceramics with pictures transfer images of NZ locations and buildings. Most were made overseas. Is there a place for those in this forum? (or just NZ-made)"

There is a topic named 'Pottery Related' in the Cooee Corner category, where anything about pottery can be posted Jeremy .....