Flair is another brand name that was used by Crown Lynn.
I can see a pretty plain blue mug sitting on this delightful saucer. 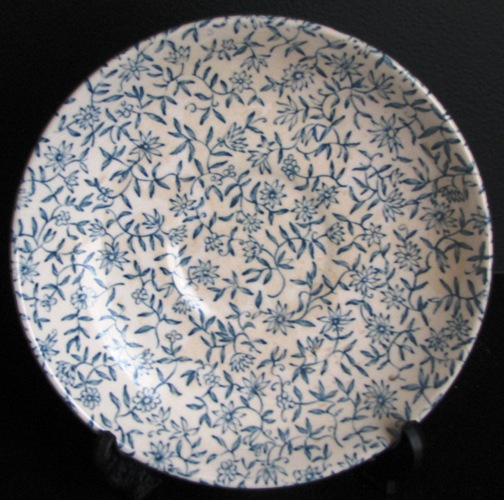 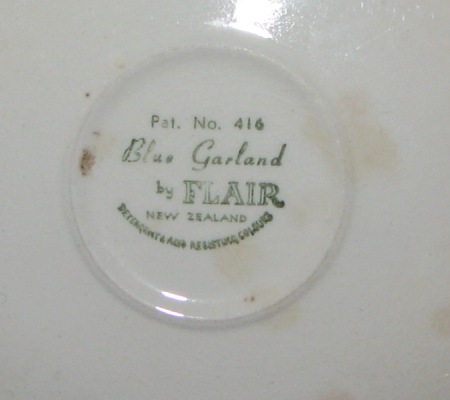 Blue Garland by another name

Have just joined the site and have noticed that a pattern familiar me now has another name.
I have in my collection 2 versions of the same pattern.

1. FANTASY in blue back stamp Pat No 136 CL/Gib Patterson Super Vitrified ware, I have a side plate and an entree plate.

2. AZURE PINK in Pink, d372 Made in New Zealand dishwasher safe, I have two side plates


Have a Pic but will try to send another way still learning this site.

Here is the photo that Jonno sent in of his Fantasy Pat.No.136 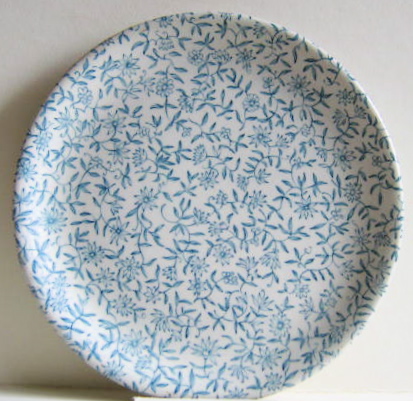 We keep coming across patterns that look exactly the same, but have different names Jonno.
Thanks for alerting us to this one.
Marl474 has already put the pattern Fantasy Blue d136 on here, but as it has a white border it looked quite different to your one.

Thanks for your reply and for posting my Fantasy image.
Have spent a bit of time sorting and getting my photo files up to date, will try to post some pics myself a bit later.

The Blue Garland/Fantasy/Azure mystery still hasn't been solved, but I've found that Blue Garland was first released in 1964.

Jonno do you still have a pic of Azure Pink on your computer, as we don't have it in the Gallery and it isn't a common pattern ...? Is it on an Apollo shape?

I think my head sorted out the mystery last night .... as I saw in my minds eye Fantasy on vitrified ware .... will have to get Marl to confirm this.

Blue Garland is on the shallow shaped ware ...

and Azure Pink must be the pink version ....?

I have just bought a dinner plate in this design. Where can find out more about it? thanks

Blue Garland was made by Crown Lynn Potteries NZ.
It was first made in 1964 and is still popular today.
What else would you like to find out starling?

Thanks. I'd like to know what years the Flair name was being used and for how many years they were making Blue Garland?

According to Valerie Monk's Crown Lynn A New Zealand Icon Blue Garland by Flair was made in the late 1950's and 1960's. Which only partly agrees with my findings. It would take a while to check out how long it was made, as I only have limited resources at my disposal.
Crown Lynn also used the Flair Art Pottery backstamp on their vases during the 1960's.

Thanks! I haven't really begun collecting it yet but I thought as a first rule, I would just collect what I liked and I really like it. Maybe as I am collecting it, I will learn more about it.

The same pattern in vitrified ware is called Fantasy. Vitrified ware was made for the hospitality industry and is much stronger than the Blue Garland white earthenware.

re Blue Garland Pat No 416 by Flair

Jonno do you still have a pic of Azure Pink on your computer, as we don't have it in the Gallery and it isn't a common pattern ...? Is it on an Apollo shape?

As you can see it a side plate and I am pretty sure was super vitrified ware.
I suspect the original request was Oct 2012? 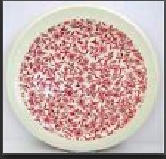 There are a lot of four digit numbers for Fantasy d136 in the Patterns Book, so if you have any of these please post them. I've added Jonno's 4612 side plate to the Gallery and would like to add the entrée plate that you have Jonno please.

The Patterns Book shows an all over pattern for Fantasy d136 on shallow shaped vitrified coupe ware and I am wondering if Fantasy Blue d136 is the version with the white rim that Marl sent to us?

Sorry Ev,   both the Blue plates in this design were sold in August 2012 and the photos I have of them are only available in small thumbnail form and are corrupted so that I am unable to email, same as the pink version that I tried to send to you some time ago.

The two plates that I sold were a side plate 165mm dia Fantasy Pat No 136 CL/Gibson & Paterson, SVW,   and the other was 183mm Dia Crown Lynn SVW 78.  Both exactly the same smooth shape style not Apollo. I presume the 4612 you refer to is a typo?

Hope this is of some help? In the throes of packing and shifting sorry for delay.

It's not a typo jonno, that is the four digit number for a vitrified ware side plate

From Jim's a Darker Blue saucer on right with supervitrified Fantasy left. 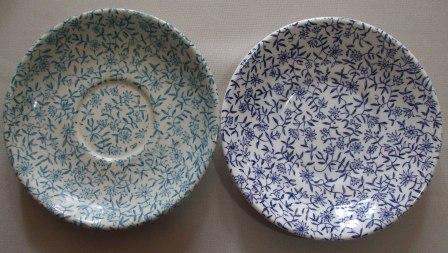 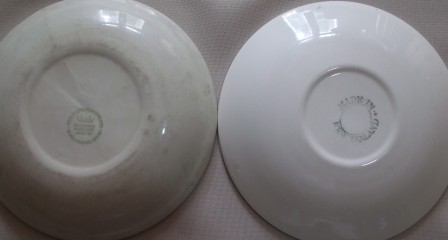 I noticed that there is one more pattern that looks like this in the patterns book
I will check it out later.

Ok so the other one in the Patterns Book like Fantasy is on Apollo ware and is
Westbury d179. Sorry that is no help ......

No worris no doubt a name will pop up one day.. 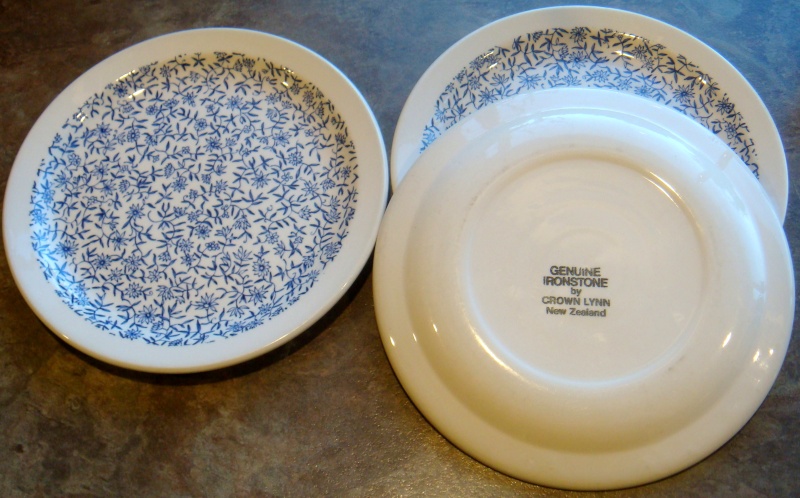 Not wanting to confuse things here, but I have 3 plates that look just like Marls one in dark blue, all backstamped genuine ironstone, all have the white band, BUT, feel like super vitrified as they are quite thick! Have added a photo of top and bottom. As you can see, they look like the bases of super vitrified plates, not the normal genuine ironstone. So I am confused as to what this pattern is as we don't have a backstamp pic from Marl

It looks like those plates are the rimmed shape and we don't have a pattern name for that shape yet. I've only ever seen the Vitrified Ware backstamp on vitrified plates, not Genuine Ironstone, so I'm uncertain about them being vitrified.

NOW FOR SALE ON TRADE ME AND INSTORE at 'Remains To Be Scene' FOR $750.00 ( Approx $10.00NZ per piece)
NO CHIPS, CRACKS OR GLAZING. ALL PIECES IN NEAR MINT CONDITION

After researching the comments on New Zealand Potterys’ forum and info from other NZ sources such as Te Papa, Musuems, History NZ etc, on the subject of this Crown Lynn pattern, and what little information is available on this particular pattern and the variations by Crown Lynn. It brings me to the possible assumption that the BLUE GARLAND pattern No.416 by FLAIR made late 1950’s and early 1960’s, was the first of this pattern transfer made by Crown Lynn of an overseas pattern. A non vitrified design but states on logo backstamp ‘Detergent & Acid Resisting ColoUrs’.
Next they produced for the Hospitality Industry tableware for Gibson Paterson Ltd called ‘FANTASY’ pattern No.136 which is stated in the center of the CROWN LYNN NEW ZEALAND SUPERVITRIFIED WARE circular logo.
Crown Lynn released the same pattern again, only this time The backstamp reads NEW ZEALAND CROWN LYNN SUPER VITRIFIED WARE in a circle with the numbers 78 or 82 in the centre (which I believe to be the year of manufacture)

They also released the same pattern with a thick white rim called FANTASY BLUE D136 SuperVitrified Ware and a GENUINE IRONSTONE by Crown Lynn release which also has a white rim with Fantasy pattern.
The pattern was also used for the AZURE & APOLLO Range by Crown Lynn.

That is a very intensive informative post thanks RTBS.

The only thing I can add is that each different shaped ware used a different pattern name, as did the clay body, e.g. vitrified or earthenware and we haven't found them all yet.  I will watch your Trade Me listing with interest, as these are rather popular patterns.