» A record price for a black baby swan ... from Stuff.co.nz


Are these Crum Bricks?

Are these Crum Bricks?

I found these 2 salt glazed bricks in a bank in Glen Eden several years ago.
I love the textured side and the yummy salt glazed finish.
After seeing several Crum pieces on the site, my thoughts are that they may be from there....?
They have been used to sit my kiln on for many years .... 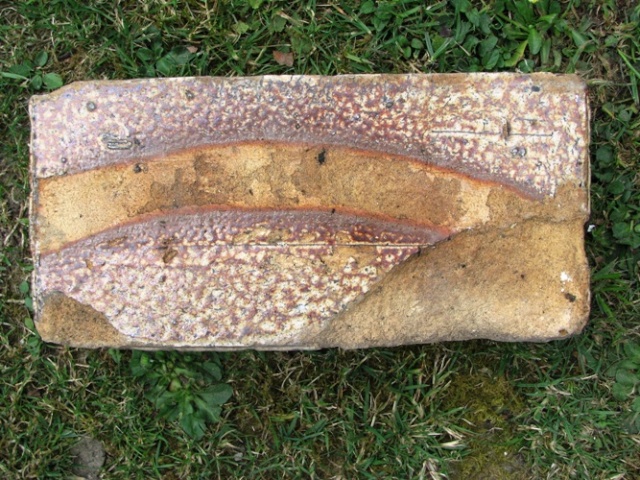 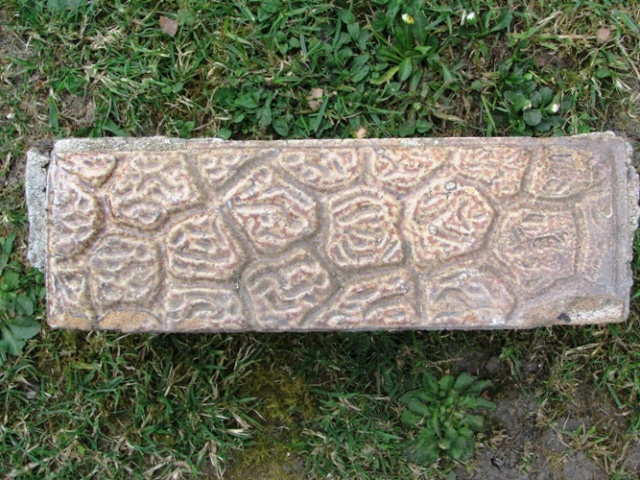 the other plain salt glazed face .. 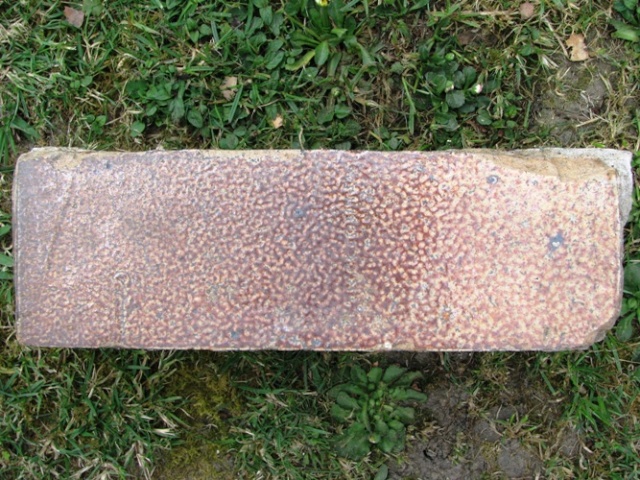 So lets get this right.....you were in a bank and there were bricks and loads of money...and you took the bricks? Chester Nealie seemed to be able to identify Crum clay work.........

Yes I would take the bricks

Finally found the pic from the New Lynn Crown Lynn Display and have answered my own question... take a look 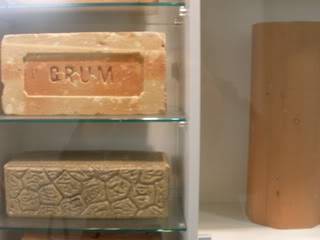 There is a pic of the roller that was used to make that pattern too ... will post later as I've got to run. 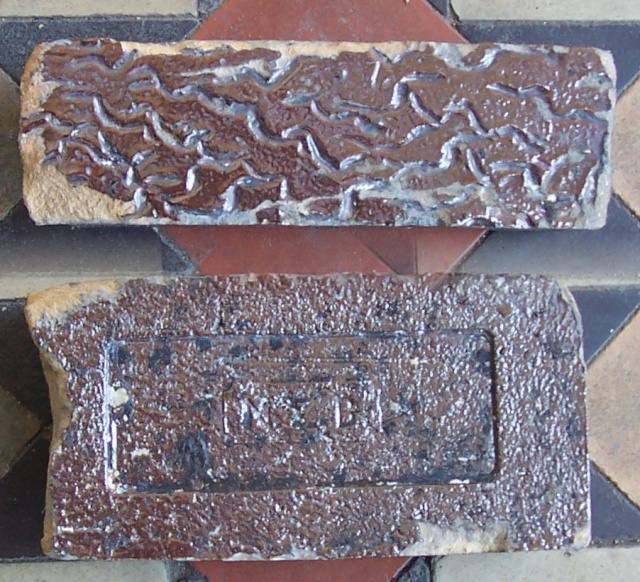 I think it's from a fireplace and has had a hard life.

Tony alerted us to this auction http://www.trademe.co.nz/Browse/Listing.aspx?id=333854891
and the NZ Brick Co New Lynn jolly well use the same brick stamp as mine.
So can anyone tell me anything about the NZ Brick Co.....?

Its possible that the brick at the New Lynn Library with the pattern is not a Crum....so could be a NLBCo Brick instead....There is a brick structure in New Lynn which is made for all the different bricks from the local area....its opposite the ANZ bank and is in a small reserve. I did photograph the bricks there years ago but can't find that stuff anymore.

When I went there with a local ceramics researcher he pointed out with his typical mixture of despair and amusement that some of the bricks in the New Lynn brickmakers memorial are actually Australian.

From the Star , Issue 5531, 1 February 1886, Page 3:
“The amount of support accorded by the public to the newly-formed New Zealand Brick, Tile and Pottery Company has been so liberal that it has been decided to commence operations at the Company's works at once. These works comprise the four manufactories formerly carried on by Messrs Austin and Kirk, W. Neighbours, J. Brightling and J. Goss."

Albert Crum bought this business about 1905 and it became part of Amalgamated Brick and Pipe in 1929. It seems that there were variations of the NZ Brick, etc name with and without "Pottery" included. 'Manufacturing in New Zealand', a 1956 Cranwell's business directory includes the Crum Brick, Tile and Pottery Company. It's described as being established by Albert Crum's four sons following the merger that resulted in Amalgamated. Albert Crum is mentioned as being involved until his death in 1951.

In 'Ceramco Limited - A History' published in 1979 it says "In 1927 Clark purchased from Albert Crum the New Zealand Brick, Tile and Pottery Company, which Crum had established in 1905 on 64 acres in New Lynn."

My attention was drawn by the Timespanner blogger http://timespanner.blogspot.com/ to this photo http://tinyurl.com/2daha7x There are more photos of the memorial taken by Jack Diamond there too.

Now we need photos of the named bricks so we can identify them. 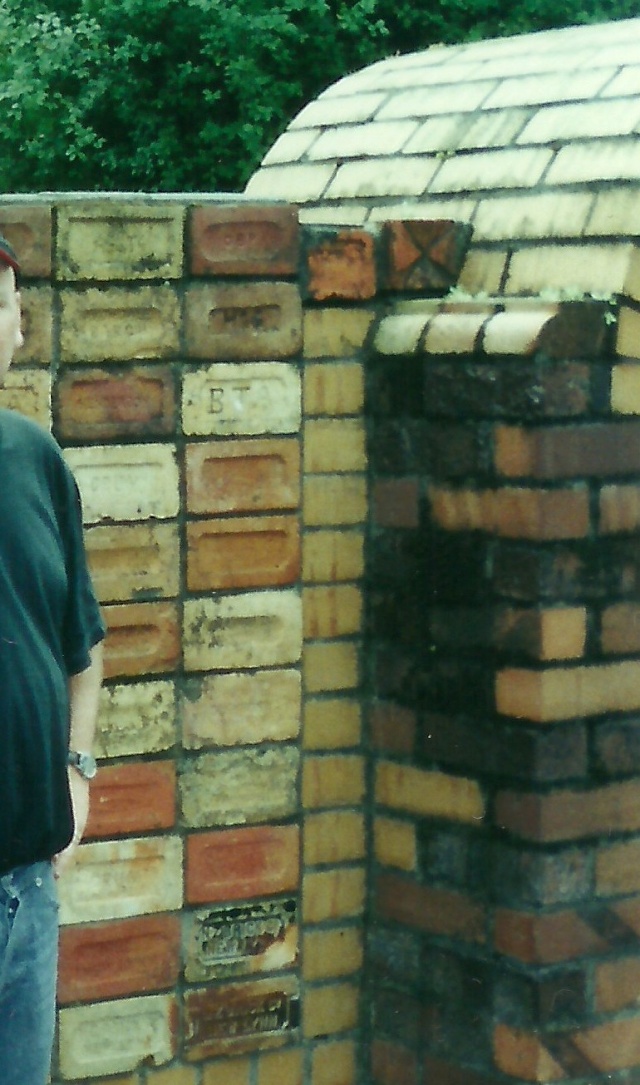 I could easily go there sometime soon and take some images of all the bricks, would that be helpful? Its just a 20 min walk

I've just come back from a quick twilight expedition to the memorial. I'll email a link to you soon as I have it up, Tony.

Marcus has just sent a photo of the Crum staff from the 1950's ....
some would have met our up and coming arty potters/master potters

TonyK wrote:
From the Star , Issue 5531, 1 February 1886, Page 3:
“The amount of support accorded by the public to the newly-formed New Zealand Brick, Tile and Pottery Company has been so liberal that it has been decided to commence operations at the Company's works at once. These works comprise the four manufactories formerly carried on by Messrs Austin and Kirk, W. Neighbours, J. Brightling and J. Goss."

Albert Crum bought this business about 1905 and it became part of Amalgamated Brick and Pipe in 1929.

No, the quote came from the Christchurch Star, not the Auckland newspaper of the same name. The NZ Brick, Tile & Pottery company mentioned would be a South Island operation, and not part of Crum's business. Perplexing business, sorting out these brickmakers.

Ah ha! Why didn't I realise it wouldn't have been that simple. Does that mean Crum started up from scratch in Auckland?

And here's the link to Lisa's blog post on the memorial:
http://timespanner.blogspot.com/2010/12/new-lynns-brickmakers-memorial.html

Great photos and a list of the named bricks!

I might pull together enough soon on Albert Crum for a post over at Timespanner, but here's what I have so far.

Rootsweb says that his father John Crum was born 30 October 1834 in Wales (he died 1918 in NZ). He was a mason in Ashburton during the 1880s-1890s. Albert was the third son, born 1863 in Forest of Dean, Glos., England. In the late 1880s, I picked up from the Ashburton Guardian that he was trying his hand for a time at chimneysweeping.

Then, the big time. In May 1895, father and son took over the business of the Friedlander Bros., namely all the stock and plant at a brickyard known as "Kolmar". Their ad on the 31 May that year says: "We are manufacturing Building Bricks, pressed; plain and ornamental Drain Pipes field or agricultural Pipes, Chimney Pots, Flower Pots, Tiles, Garden Borders, &c."

They did well, Albert even running for the position of councillor in Ashburton in 1904. He won -- but then came the offer he couldn't refuse. He sold the Ashburton Brickworks as it was known then as a going concern, and headed up to Auckland "to open a large brick and tile and pipe making business, on behalf of an influential company, of which he has been appointed manager, and in which he is largely financially interested." (Ashburton Guardian, 12 August 1905) They held a presentation for him in October, then he headed north.

Peter Buffet, in his history of New Lynn and the New Lynn School, says that Albert Crum bought out Charles Gardner's works on Clark Street at New Lynn (Gardner, one of the same family who set up a brickworks on the west side of Rankin Avenue, apparently tried to set something up in 1902). Buffet says Crum took over in 1905. But what was this "influential company" he was manager for? I'm still digging ...

The answer to the "influential company" looks like that run by C F Gardner and R O Clark from Hobsonville. Those two took out a patent in 1906 for a "method of advertising" (Wanganui Herald, 7 July), and the DNZB entry for Briar Gardner says:

"Briar Gardner’s family had long been involved in the pottery industry. As a child she loved watching the kilns being fired at Hobsonville’s Amalgamated Brick and Pipe Company, which was owned by her uncles. When three of her brothers established a brickworks at New Lynn in 1902, she went with them as their housekeeper."

The Gardners essentially had New Lynn brickmaking sewn up -- and Albert Crum, although apparently a shareholder, was also simply the New Lynn manager. No wonder "his" works were "taken over" by Amalgamated Brick and Tile in the late 1920s. They already belonged to Amalgamated, right from 1902.