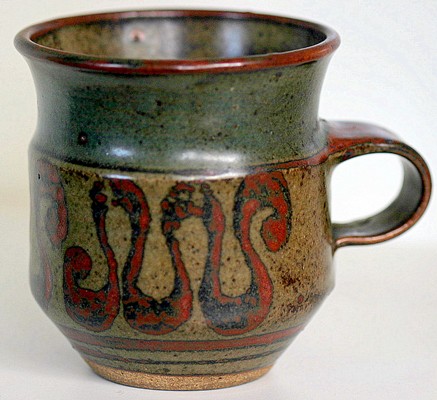 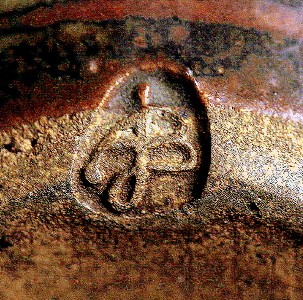 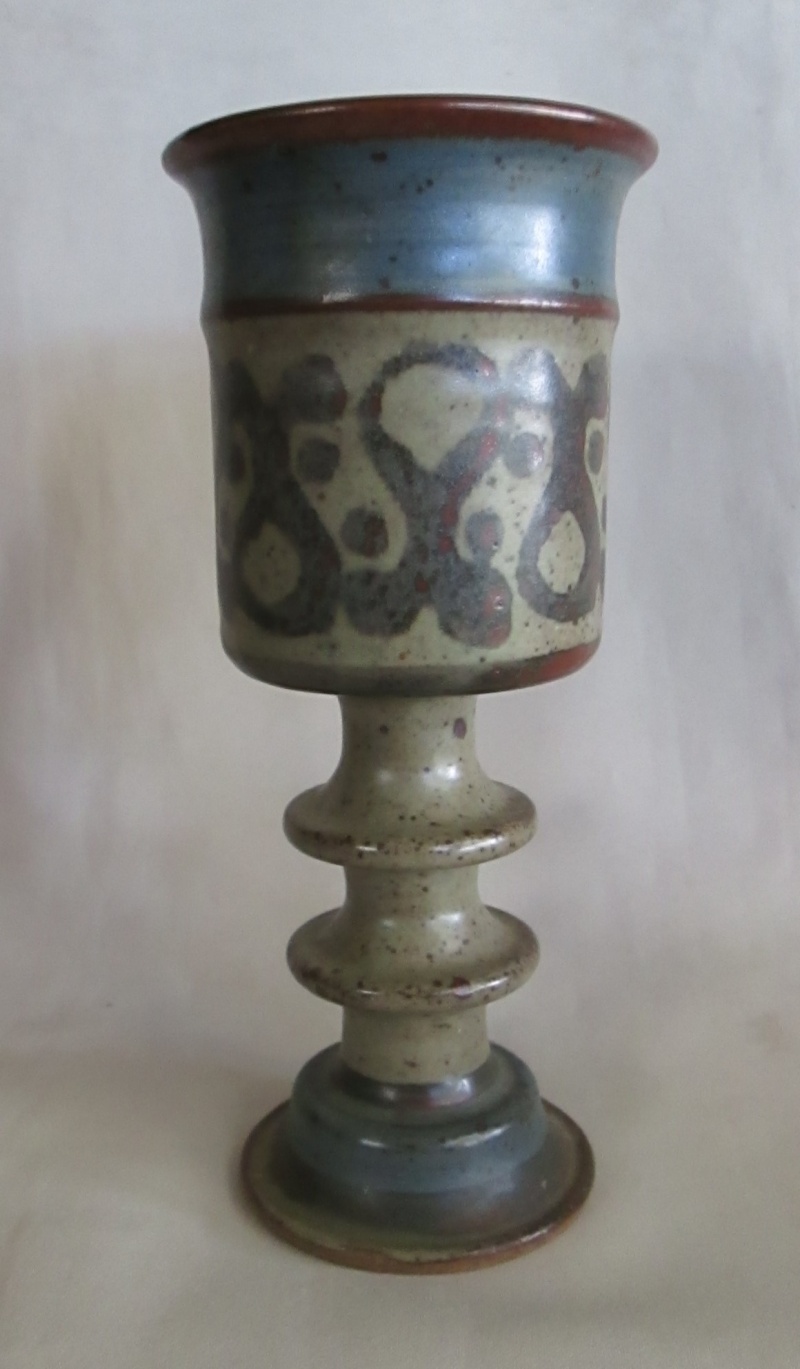 Another mug by Arnaud Barraud in the same colours, but lacking the arabesque/snake patterns. 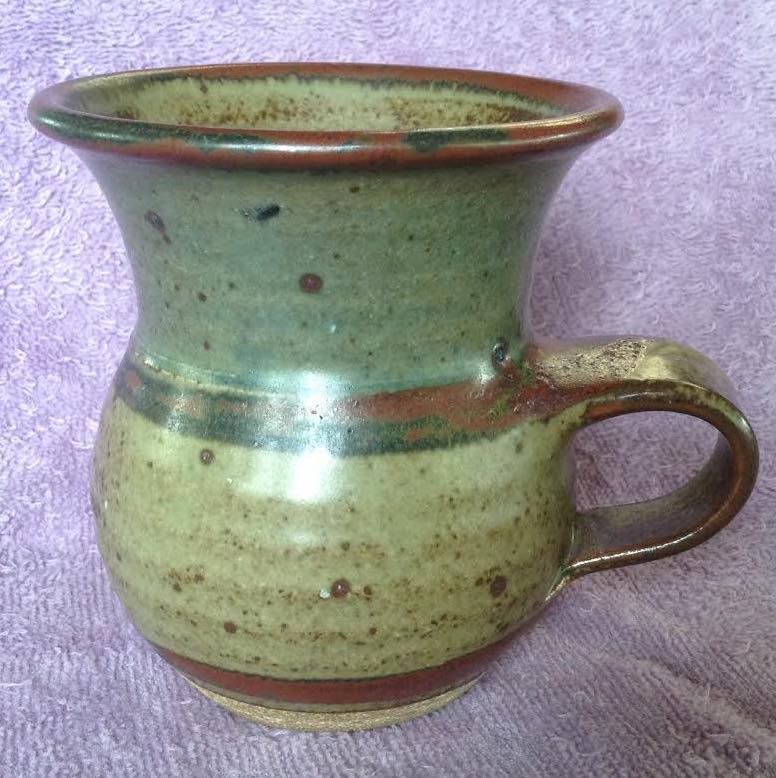 A $6 Christmas present from trademe. This held the favourite spot briefly (until the Darryl Frost). I must give it more attention.

I'm guessing that all the pieces here date from Barraud's years in NZ before moving to Australia.
---------
20/7/16
A catchup on my ABs here. All the same colourway. 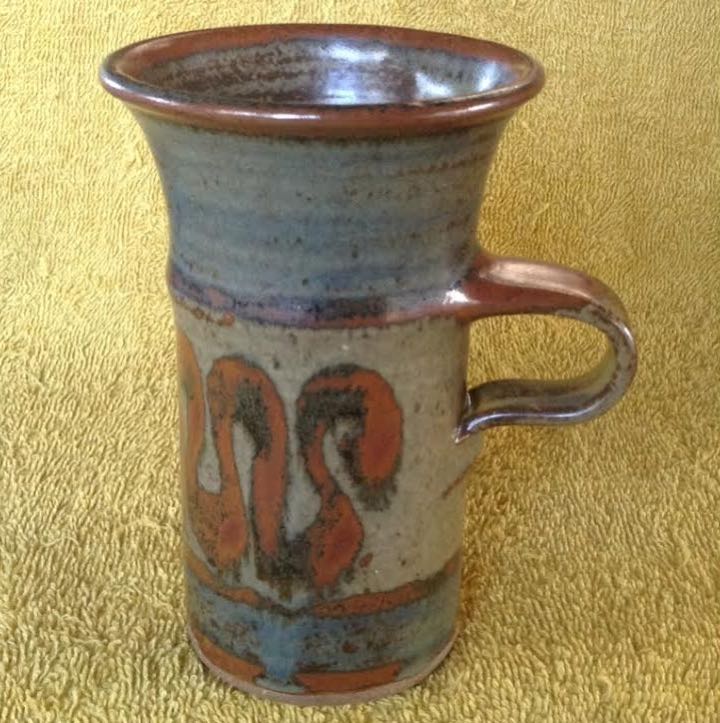 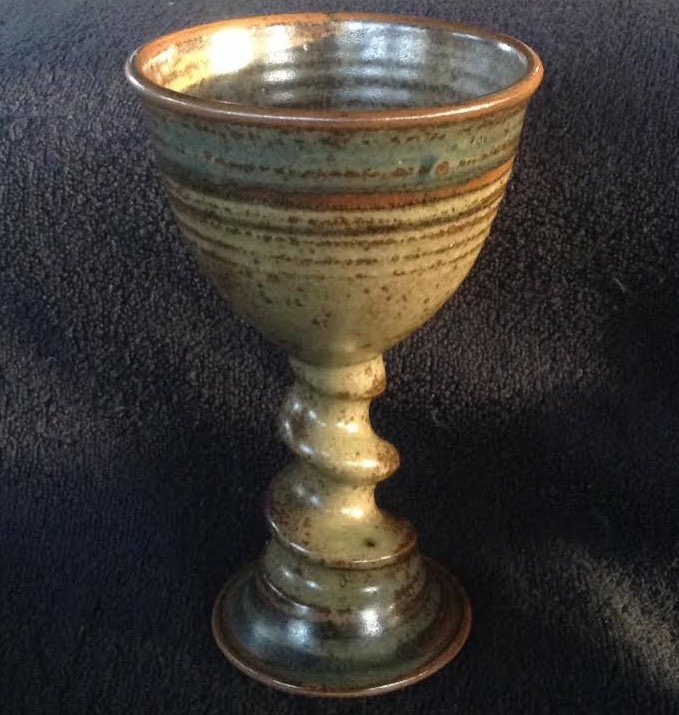 one of three tall goblets
.

Yay at last I have my own piece of his work.  A lovely small casserole in the old fashioned high fired stoneware style that I love 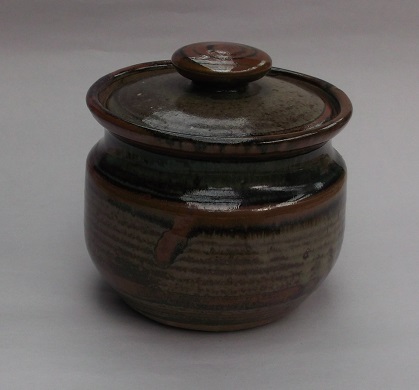 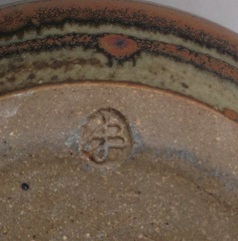 I picked this mug up at Wellsford Hospice in a rushed visit on Saturday morning. As a Salisbury Ambrico #1 vase cost a whopping $6 I was selective and only took one of two large mugs there. This one appealed to me because the glaze reminded me of my Elena Renker mug. I tried to make sense of the mark but got nowhere.

After putting the iPad to rest for the night in another room (our Auckland place is not a perfect setup) it occurred to me that this was Arnaud Barraud's work. Although the glaze differs from anything of his I have seen previously the widely flared lip is typical of Barraud's mugs (as seen on all three above) and the handle is very very similar to those on my others. 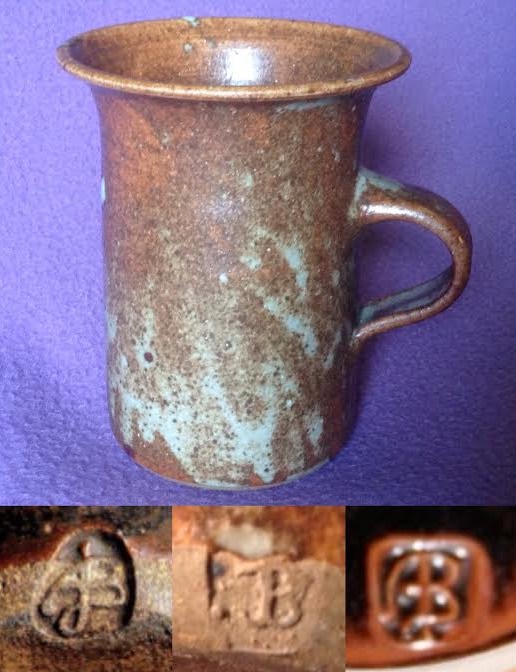 The maker's mark (centre) is not completely formed and, while there is sufficient there to liken it to the Barraud marks we already have in the gallery, I believe it is different again. On this one the swoop connecting A and B appears to be at the same height as the lower loop of the B, which led me initially to think the mark would be JB. And the B itself is a different shape.

This is a finely potted mug and surprisingly light. I think the body is only about 2mm thick, which tells me that it is the work of a very skilled potter.

Could this be an earlier piece?
I am tempted to contact the potter in Australia.

---------
Later ...
Looking on the net I find may different variations of the AB mark, including one where the hook of my J shape appears. Not all versions connect A and B with a loop below:
http://www.australianpotteryatbemboka.com.au/shop/product_info.php?manufacturers_id=33&products_id=2125&osCsid=46ff39f02e29bb9db5945f2a3329f0f7

I see repeated references to marks being "after 1975", that is I believe referring to work produced in Australia rather than in NZ although it may alternatively be suggesting such a date is when the first or a particular AB mark was used.

In one Australian advertisement I see a bottle and wine glasses similar to others I have seen on trademe.

I have seen no mugs similar to the four on this topic other than those here.
.

I agree that the handle and lip tell that it is Arnaud's work.
I have enhanced your photo of his mark, but it hasn't helped much.
Still, I will add it to the Marks Gallery.

Arnaud Barraud lidded container with handle courtesy of the Ferret: 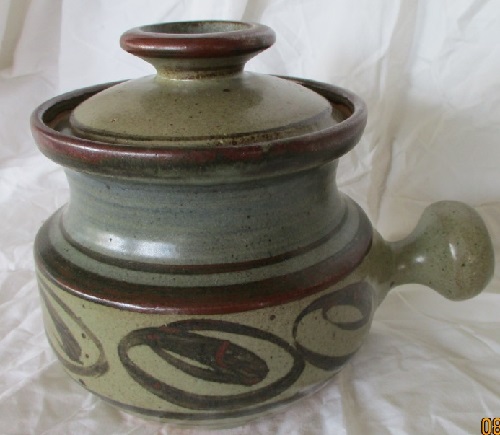 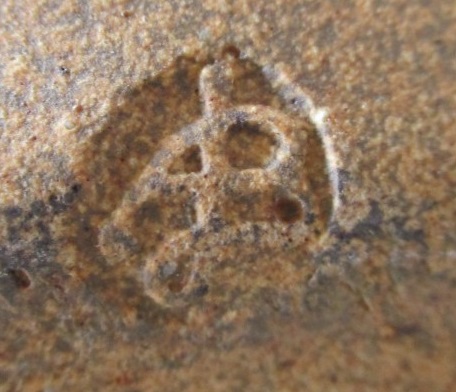