Another little gem from Te Papa...

This is pic brilliant. It dates those white monogrammed railway cups at least as early as early 1950s. I wonder when they stopped making them? That new range from 1968 included the railway shape, and I certainly remember them from the 1960s when I was travelling to Palmerston North on the train.

Val, the cup proportions in that pic appear to vary. May just be the photo.
Some look taller and thinner than the CL cups, but the handle I see certainly look CL.
I wonder if there was a mix of cups there???

--------
1/3/16
Note the saucer on the floor has a Refreshment Rooms transfer rather than NZR!
One of the bowls under the counter may too.

Quite possibly a mix of cups. And an interesting bowl, possibly CL, possibly not. Life's little mysteries!

The blue transfer NZR duo is the cup that comes to mind as the iconic NZ railway cup, which may be because we see them more often (read "many more were made"!), or it could simply be because they appear prominently on our favourite books about NZ pottery.

Black and white photography does not discriminate one version from the other but I have good reason to believe that any Crown Lynn cups in the brilliant photograph that Heather has linked us to are actually the black transfer version. Simple reason is the photo is dated 1952 (21st July, 7.30 AM) and I have yet to see a blue transfer CL cup with the appropriate 1948-1955 backstamp. But there is more.

I emphasise the words "Crown Lynn cups" because as I have said above I believe I see cups of two distinctly different proportions, and I assume that if that is correct then the "other" cups might be from Temuka. A comparison of (one) Temuka NZR cup shape, including handle, with cups in the photo have not convinced new that any cup in the photo is from Temuka.

Arguments for Crown Lynn or Temuka aside for now, what IS clear is that those shown in the photo are not blue transfer Crown Lynn cups. How can I say that with such assurance? Easy really. It's in the position of the transfer: on black transfer cups the transfer is adjacent to the handle and on blue transfer cups it opposes the handle! All the examples in the photo appears to be "transfer-adjacent". (Note that although the Temuka NZR transfer is slightly different from the CL, they are in the same position on the cup.)

The following is the same photo I have just posted elsewhere: 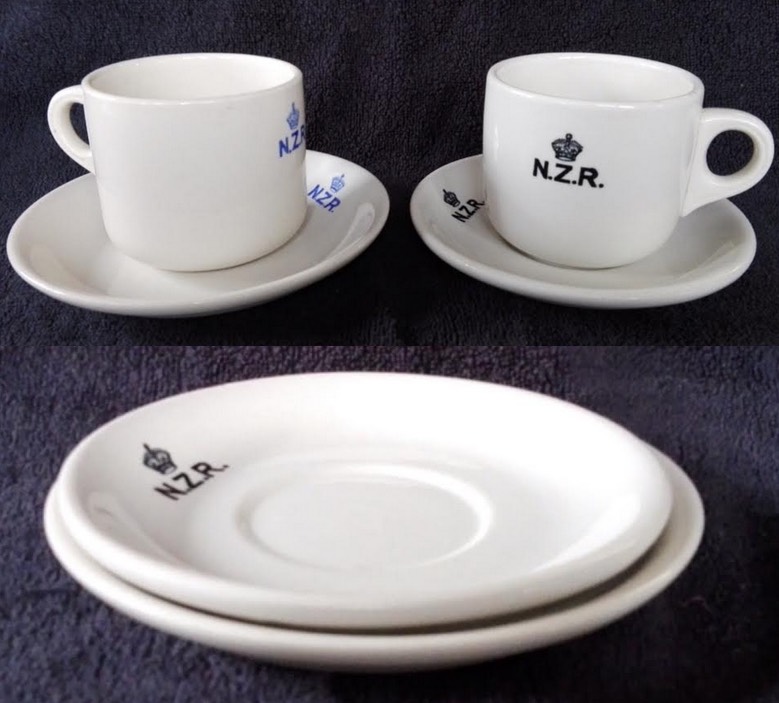 photographed with some haste and reluctance by a teenager

I may very well be wrong about the age of CL blue transfer duos but I will maintain that position until such time as I see one with an earlier backstamp than the 1955-1964 crown and star. The black transfer is a surprise and a break in continuity between the cups with "Refreshment Rooms" transfers (made both by overseas makers and in NZ by Crown Lynn) which from my observation are all also blue.
.
I am working on a presentation on NZR cups for the Whangarei Antiques club for early next year. Without even addressing wares from England (many makes if you include the early china ones) and Temuka (at least two of them) there are more different cups from Ambrico and CL than we could have anticipated. Even before the familiar black and blue "NZR and Crown" monogram cups shown above came into existence there were three different NZR cups from Ambrico (earthenware no handle, vitrified no handle, earthenware with Carlton cup handle, and saucers !!!) and as I have a CL saucer with Refreshment Rooms monogram there will also be a CL Refreshment Rooms cup. Down the line are the strange "O" NZR monogram from CL and English cups, the "lazy z" monogram, the electrification cup, the railcar cups and maybe more. Then the copyists: Catherine Anselmi, Studio Ceramics, and so on.

And then again ...
It turns out that Ev's cup and saucer both have 55-64 backstamps rather than the 48-55 originally used to illustrate the topic, so my theory is still holding.
.