Globe
Get Your Own Visitor Globe!
Latest topics
» Wine jug and sips

» Is this handled soup cup/bowl CL?

» Is this ceramic tankard CL? 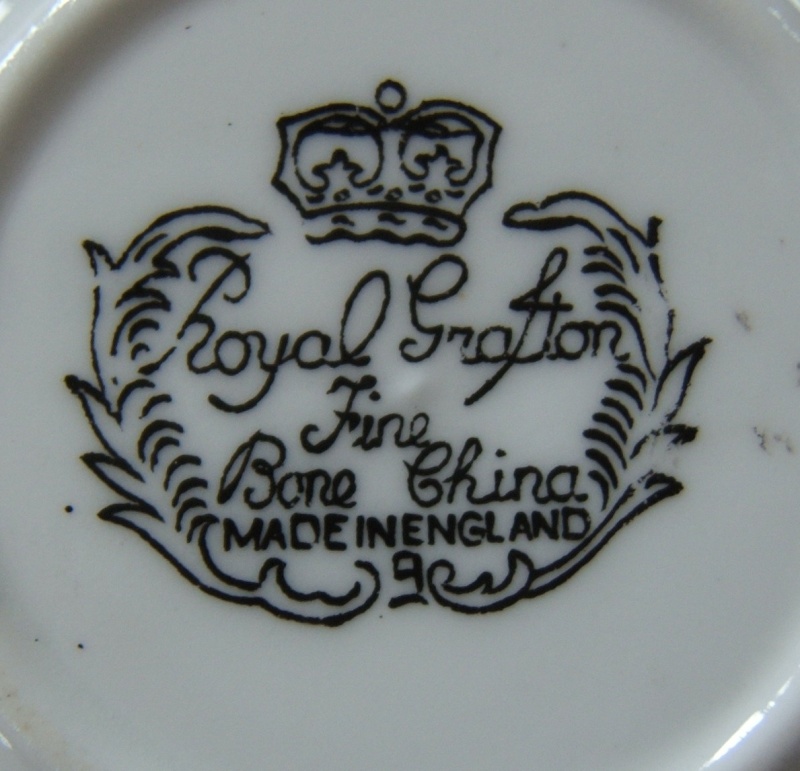 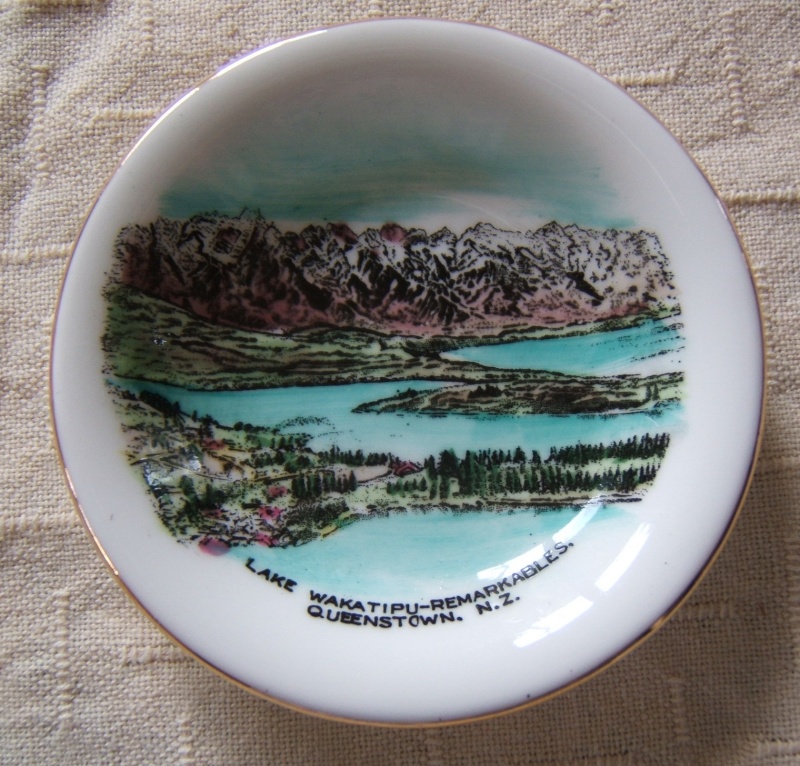 [/url]
I have read that Crown Lynn bought the Royal Grafton factory in England in 1968 to make fine bone china. I am assuming that this is one of the products. Not sure whether it fits but thought it might be of interest. The dish is 6cm diameter. Cheers, marl

I often look at Royal Grafton pieces on Trademe and wonder if they were made when owned by Crown Lynn. These usually have scenes from NZ on them too ...
I just noted yesterday that Crown Lynn purchased Royal Grafton in 1972 and ran it until 1985.
I hope someone can shed some more light on this subject.

re Re: Royal Grafton souvenir dish

There is some useful information at:-

including from the son of the final Jones family original owners.
The pottery no longer exists .

Page 112 of Monk has a photo of a cup and saucer and some notes on the history of Crown Lynn's connection with Royal Grafton.

It would seem to me that the plate pictured above could have been made at
Royal Grafton when owned by Crown Lynn. On the other hand the use of the Grafton name on the plates sold to Devaz of Greece was simply the use of the name by the New Zealand factory, they were not fine bone china and were clearly marked as Ironstone. Hope this is if some help.

Found this while looking for more info on Crown Lynn trademarks ....
http://trade.mar.cx/CA450698/

It all helps to sort out the story

I have some uncertainty about the origin of the dish that Marl has pictured in that the back stamp is a poorly executed copy of the Grafton Logo used in the two patent sites you posted and on the site that I posted earlier with comments from the descendant of the founder and including his comment about Crown Lynn buying. The same facsimile design is on the Devas Ironstone ware the CL exported to Greece.

The point I am getting to , with some limited experience in trademarks and copyrights , is that it is very important to make sure that every time a design which is a registered trademark is used on a product that it MUST be faithful to the registered design other wise legal complications can arise.

Marl's backstamp breaks this rule. Just my opinion of course.

I see what you are getting at Jonno, as the backstamps are different in many ways.
I didn't spend any time comparing them until now

So will have to keep a look out for matching backstamps to the registered one.

This is a Grafton mug I picked up ages ago - before I realised the CL connection. I also have one somewhere with a bland lithograph of pink and grey flowers.. Gail Henry says that CL imported large quantities of Royal Grafton wares for a time during their ownership of the company, mainly for sale in the Briscoes chain. I was told that the factory was sold in the mid-1980s and demolished not long after that. I haven't heard the theory about CL buying Grafton to get around import restrictions.. am wondering how that would have worked? 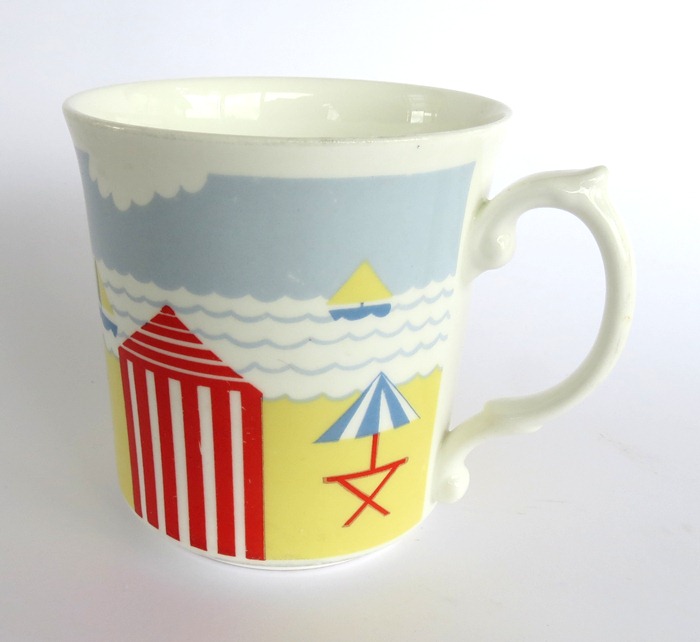 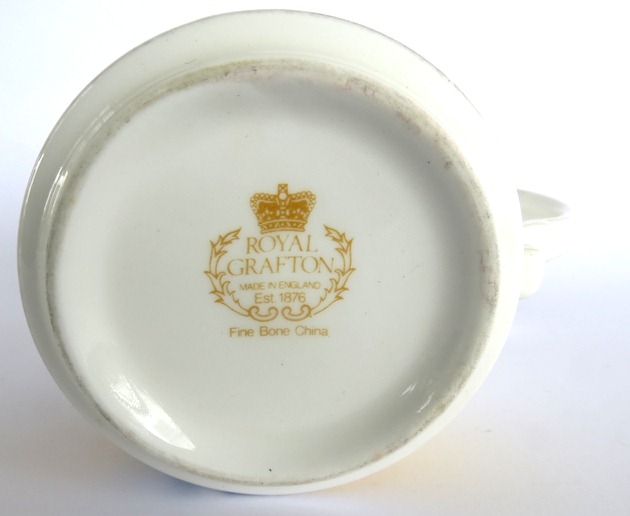 The dish pictured is definitely a Royal Grafton item made at the factory in Stoke-on-Trent, England.

Grafton was purchased by Crown Lynn in 1971 and was owned by them until a management buy-out in 1985. I worked there from 1981 to 1992, during which time we modernised the product range and competed favorably with other bone china companies until the late 80s recession caused us to have to sell to John Tams. They took the brand down market and it closed after a few years.

The mug pictured is one of a wide range that was introduced during my time as Marketing Director.

Thanks very much for sharing that information TonyB, as it helps to answer so many questions.

You are most welcome. I still have friends in NZ as a result of my many years working under the Ceramco/Crown Lynn parent company. It gave me a lot of insight into Kiwis. ;-)

One thing I don't think was ever clearly understood, however, was that Crown Lynn used the brand name Grafton for the earthenware made in NZ for the Greek firm Devaz. That was kept very quiet.

Thanks TonyB for your comments on Grafton . I have just found another little dish similar to the one at the start of this thread but with a different illustration, sadly the worse for wear.
Whilst I first questioned whether these dishes were made during the time that Crown Lynn owned and operated the the company I am now not so sure?.

I am also still puzzled as to why a such long standing company with a Royal Warrant would use a different style of back stamp as seen on both of these little dishes. Quite amateur and naive in design compared to the crisp and well executed design shown on other pieces. You comments would be welcome .

As far as the use of the word 'GRAFTON' on the pottery sold to Devas of Greece is concerned it seems most likely that part of that design was certainly influenced by the Royal Grafton design, at the same time Grafton is a name well known in Auckland, Grafton Bridge and Grafton Gully being on the edge of the CBD and Crown Lynn used many locality names on their pottery. 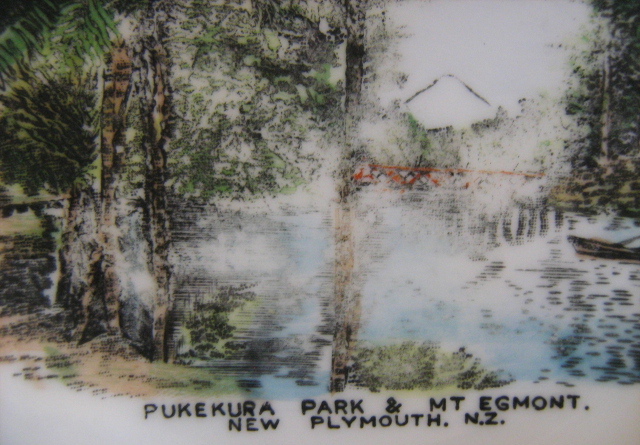 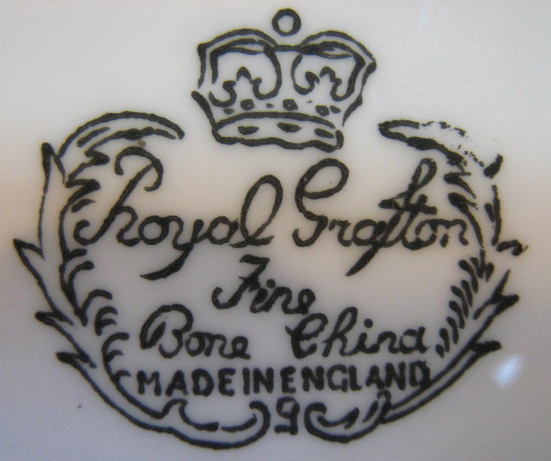 When I arrived at Royal Grafton, one of the things I started to do was to improve the quality of the backstamps as well as the products themselves. The company had a very crude printing facility in-house, which was part of the cheap and cheerful approach that was thus far adopted to such things.

The dish illustrated is probably from the 1970s, at a guess.

Incidentally, the company did not hold a Royal Warrant at that time or since. The story was that Queen Mary granted the right to call the products Royal Grafton, back in the 1930s, after an exhibition in London drew her attention to the company. As to whether it was by means of a Royal Warrant we were not sure.

Hi heres a pin dish I have with a different stamp. 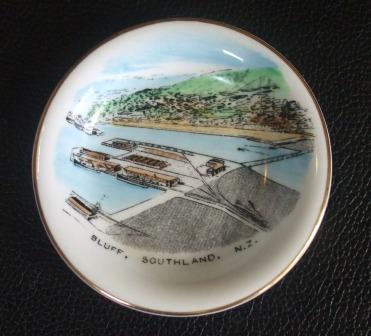 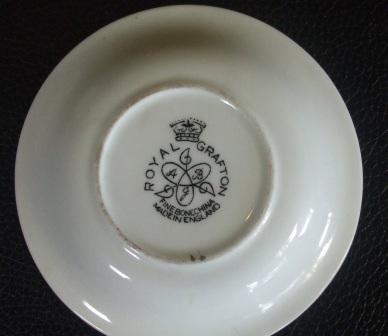 I can't say I've ever seen that backstamp before, but it is clearly from before Crown Lynn got involved. That is evident from the letters ABJ which stands for A.B. Jones & Sons, the previous owners.

Thank you for your comments Tony , the wildly different styles and artistic quality of the two backstamps on the small dishes are a bit of a puzzle and we may never know the reason.

I wonder if the Jones owned Grafton Pottery was exporting to New Zealand when these
pieces were seen by Crown Lynn the idea of buying Royal Grafton was formed?

You are right, Grafton had no real image at that time. But there was a history of making souvenir ware, going back a long way. You might find this to be of interest:

Crown Lynn had close contacts with Stoke-on-Trent (the home of the pottery industry) over a long period of time. Tom Clark would have been a regular visitor, as would others. They would have bought a lot of equipment and materials there. A Kiwi friend of mine studied ceramics at the local college in Stoke. They would have been aware the company was up for purchase.

I picked up a bit of souvenir ware on my travels. I wonder if the design is hand-coloured - perhaps the black and white transfer applied then dabs of colour added. What do others think? 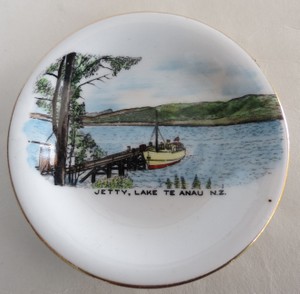 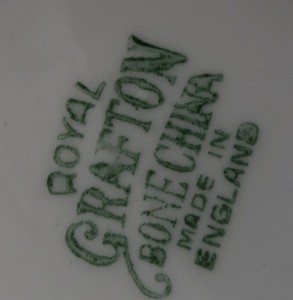 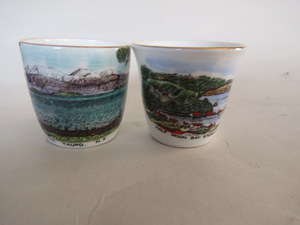 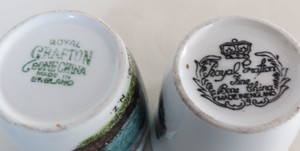 Re Grafton Plate Design,
Yes I agree that it looks as though it might have been a B&W that has been coloured, I am r minded of hand coloured photos which were not unusual in the pre-colour photography days.
However, we will likely never know if the original was hand coloured and made onto a transfer or each individual plate was treated similarlay. I would plump for the former.

I meant to mention that the Backstamp on the coloured on isn't from the Crown Lynn days. The other one is.

So Ev during the years of CL ownership did they use only the Devaz style backstamp?

Yes Val they used that Devaz type stamp as well as others and it looks like I will have to travel down that road again, or revisit old posts to clarify.

I tried to work it out from old posts but my poor old brain got frazzled. I will have another look tomorrow.

The mark on Marl's original post is from when Crown Lynn owned the company as is the mark on your mug, which was confirmed.

This is the mark on a bone china set called Majestic that I have and this along with many other patterns is in a catalogue at the Crown Lynn Museum, hence how I recognised it 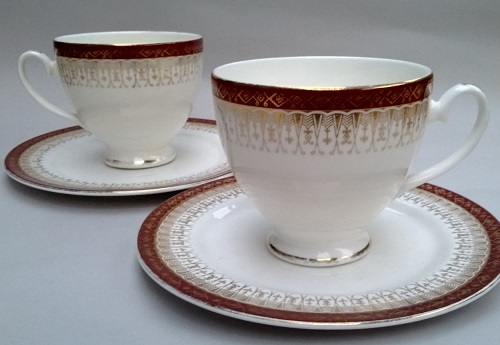 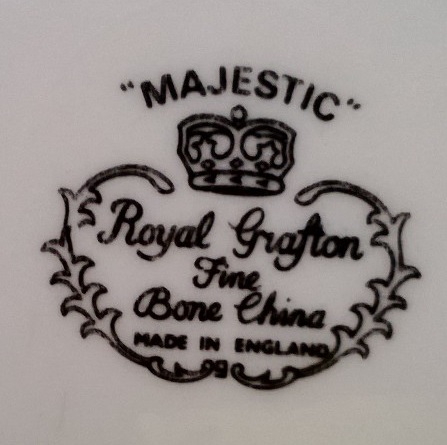