I saw this yesterday when I was looking at uno's teapot.

We would need to know where her information came from to know its value as there is still the matter of double up on the numbers 431 and 432 with the lamp bases to address.

I think that even though the double up has given rise to some debate on the matter it is generally agreed that the Santa and side-handled Toby are Crown Lynn. This is reflected in the gallery.

I think maybe records were destroyed by fire in the mid fifties and numbers reissued where items were discontinued. Maybe the moulds had disappeared by that time.

I have spoken at Antiques Club to people about Santas, people who received them for Christmas when they were kids, and they appear to date from the 1940s.

Just need to compare Heather's Santa with Kat's shell vase.
My word I do find Santa creepy and I think it's because of his beady eyes! 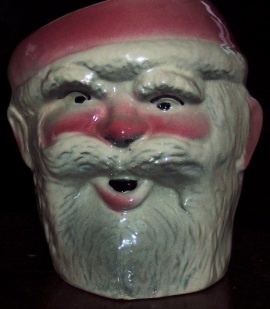 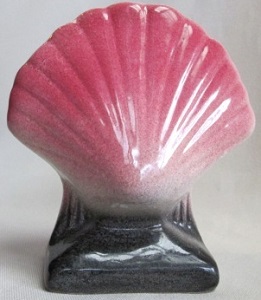 I looked everywhere yesterday for the thread for the white coloured CL dog jug that sold on TM recently, it had the same shape mouth pourer as Santa..

Is Santa's mouth a pourer like the Bonzo jug?

Yes maybe the same modeller made them?

Santa's mouth is not an opening, just black glaze.

These colours have always reminded me of the Santa mug. I had a couple of of them many years ago but was persuaded to part with them. Silly!!!
I do wonder what these are though. 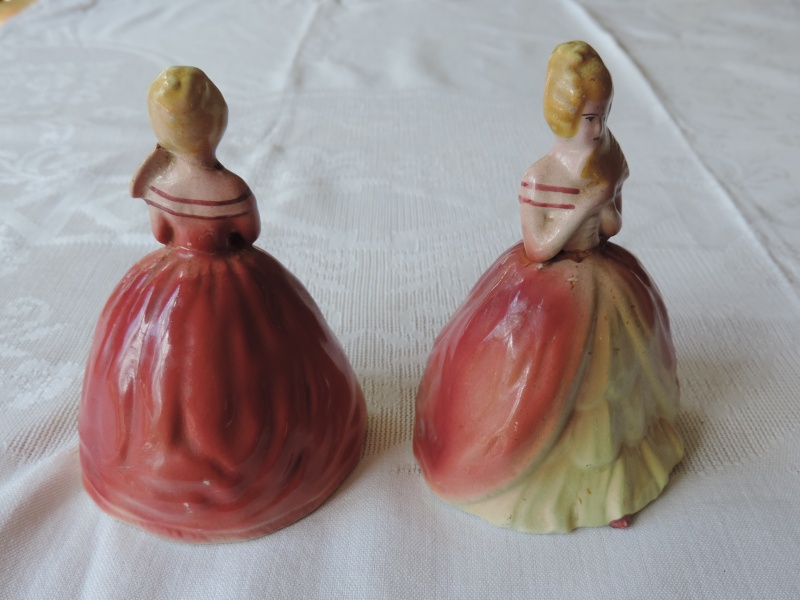 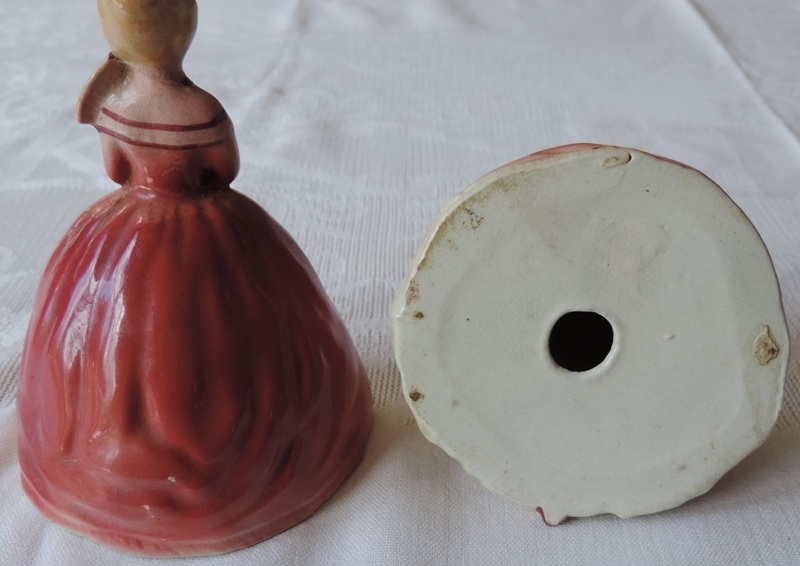 Hellooooooo,
I wasn't aware that the Santa mug doesn't have a handle .......?

Not many mugs without a handle are there, unless they are a Japanese teabowl.

I've never seen the likes lolzzz
Titian did some odd handles on Toby jugs didn't they?

Santa as greenware at Crown Lynn

I know it is already settled that Santa is Crown Lynn but I felt this story would add something.

I popped into the regular Age Concern garage sale today to show Maata (Martha) my photos from the Portage Museum opening which she was unable to attend with me as she had family commitments. Maata is reluctant to give personal details (including surname) but from our conversations I have deduced that she is likely in her mid to late 70s. Maata worked at CL up until 1955 at the latest, and the age 17 has been mentioned but whether that refers to when she started or finished at CL I do not know.

Anyway ...
When I had finished showing the photos I inadvertently flicked to a picture of a Santa Toby, to which I heard the surprising response: "Did you do that?"
Maata was referring not to making the Santa but to adding the colours to it;
She had only ever seen them as greenware!

Maata had to ask when CL made the colourglaze in the Portage display as it was after her time. She was not familiar with, or had no memory of the Shufflebothams or the Steenstra (who I think was after her time at CL), but did tell me that she has a coronation Loving Cup, which had belonged to her mother. She has a swan, but the black one was also new to her.

I think Maata worked mostly in fettling but she has also mentioned an X-Ray machine (or something similar) used for testing bisque wares so may have moved about a bit.

A great story Jeremy !!
Nothing is ever set in stone, as there is always room for more info.
Would love to find some info on the Santa Toby in the Portage Museum archives!
Haven't found anything older than about 1959/1960 so far.

For some reason I cannot find a photo of the Santa Toby numbers.
Can someone please add one as I think it matches the font on the 463 plate that oakpot posted.
The 432 Toby Jug uses the same font as the 463 plate and the plate doesn't match up with the Crown Lynn records, which show the 463 to be a lidded Cheese Keep.
So we may be onto something here. What exactly I can't be sure 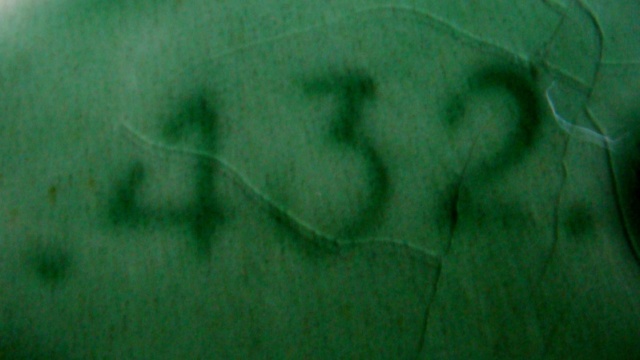 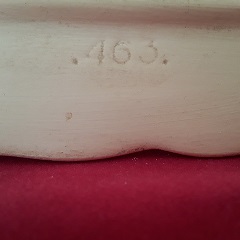 The Santa mug numbers 431 are larger than the plate 463.
It seems that the base of the cheese keep has been sold separately as a decorated plate. 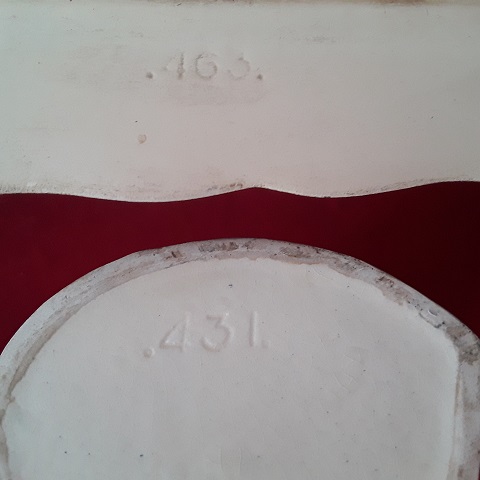 Ev,
Oakpot's plate looks to me to be the same as the cheese plate, just without the cover.

I have asked if it is e/w or vit, as vit seems unlikely for a Royal Oak piece. 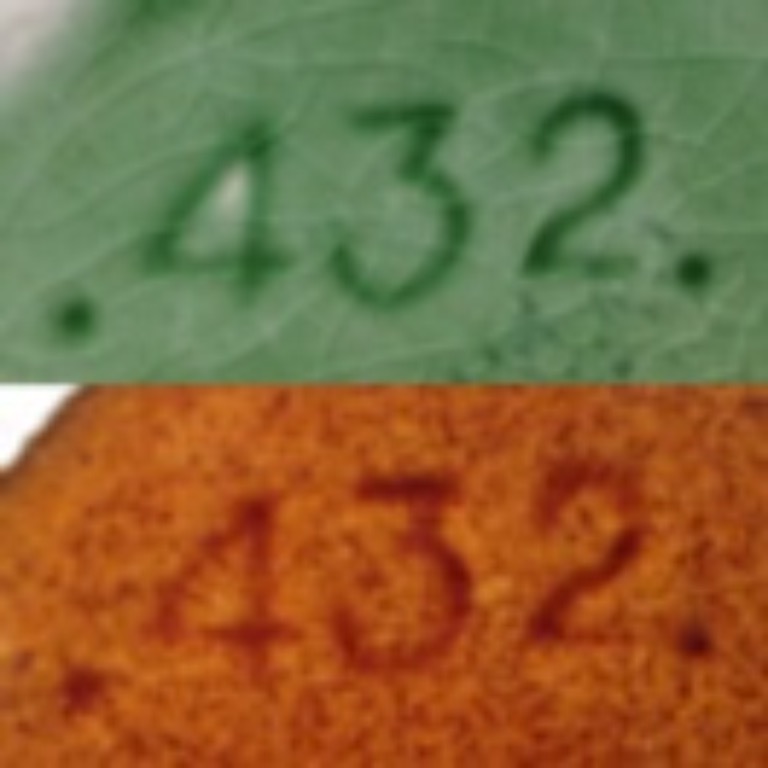 My Santa is unreadable, today at least.

Thanks guys as the 3's match and I am relieved to see that.
Perhaps Crown Lynn made the plates in both earthenware and vitrified ware?
Unouwanit posted two of these trays recently on Facebook and they had a persons name and 1953 on them. Yes they will be Crown Lynn.

Well it has taken me 8 years to hold these two Toby Jugs in question in my hands.
I was at Te Toi Uku on Wednesday and Rosemary asked me to look at a series of Toby Mugs that are in the collection.

I was really surprised at the size of the Highwayman as he was so small and the modelling workmanship was very amateurish.  Plus he has an ungainly side handle that I didn't approve of as well.  The glaze was thick and thin and I didn't like that either.  The base was discoloured so I couldn't check it as I would have liked.  I didn't warm to him at all, poor chap.

The Santa Toby on the other hand was a decent size, but I guffawed at the hat handle.  OMG who would do that?  He was spray painted in pink and grey with eye details added by hand which made him so creepy!!  The clay looked right and the weight seemed right too.
Rosemary asked Bruce Yallop to check out these as well and he didn't think that either were Crown Lynn and he had never seen them before or any moulds that they would have been made in.  So we haven't made much progress have we?

I'm just pleased to have had to opportunity to check them out, thanks to the Museum.

re the Santa..I was looking on-line at the Temuka items held at AM and they have this Santa listed as Temuka....but haven't seen one anywhere else under Temuka including the Oamaru collection. 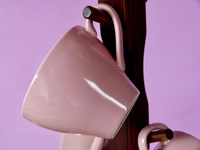 Wow thanks for that Melita.
He has numbers just like Crown Lynn and I have to eat crow and agree with the majority who say he was made by Crown Lynn.
I wonder where they got their info as Temuka do not put numbers on their wares, but usually stamp them through they years.

They have a photo of the base and it has no number...not one I can see...(apart from a collection sticker number)..and a $6 price tag!...

Yes you are right! The clay doesn't look right either .... so this case isn't closed

H,i I wondered if it is a toby jug or is it a christmas decoration /vase the finish is just a bit crude for a toby jug.

signal red wrote:H,i I wondered if it is a toby jug or is it a christmas decoration /vase the finish is just a bit crude for a toby jug.