I have seen in the past the odd bit of plain white forma, found a side plate not long ago and thought it would be nice to make up a set, but can't seem to find any. Was it ever produced as sets? I did admire a jug and sugar bowl in white which was with a set of cups and saucers that were brown and white, but the seller would not split them up so I missed out. I thought the shape of the jug and sugar bowl (which had a lid with a cute little handle on top) was rather artistic. Now I sort of regret not getting them anyway.

I have a set of filigree which I have built up over the years, being the one I started buying piece by piece back in the 70s, but still cannot find jugs and bowls of that. Does anyone know if I am wasting my time looking?

Yes it's scarce, but you aren't wasting your time.
Our first dinner set in the '70's was white Forma La Paloma. It was only made for export and all of ours were seconds. It's in the gallery but the picture doesn't do it justice. As pieces broke we eventually went to C Lynn to find replacements. They had to be plain white as La Paloma was no longer produced. (Yes it was produced in sets) Eventually plain white was no longer produced and we had to make do with an almost white with sandy specks. I still have some of each.
Now lets jump forward four children and thirty years of using almost unbreakable Arceroc!
I had always kept my white Forma and used it on the rare occasion we had guests for dinner. As the children left, I started to try to find pure white replacements for the speckled stuff I didn't like. La Paloma doesn't wear well. The sugar crystal like pattern wears and turns an ugly grey. I only ever found one but I did find the odd one or two plain white. At first I bought patterns I liked that were on the plain white Forma base such as Lilliam Brown, but gradually I found enough plain white for a four set, then a six. I rescued saucers from under my pot plants. Only yesterday I found 2 white Forma cups at the recycling depot. When I got home and washed them one had two short cracks on the rim that showed up when wet. - them's the breaks and no complaints when you have paid $3. I once had a jug and sugar bowl. I have no idea where they went so I'm looking.
The conclusion is, keep looking if you really like it. It's out there. If you want something in a hurry, go for white Apollo. I know where you can get that for about $4 a plate, enough to cater for an army!

Thanks for that info, I will keep trying to find some. I originally started with a set of plain white apollo, which I gave to my oldest son when he went flatting, needless to say, it did not last very long! (I regret giving it to him now!

) I have found the plain Apollo very easy to find, still heaps of it around for a reasonable price. It seems to have a slightly sturdier glaze than the white forma, but I like the crisp lines of the latter now. Murphys law says that if I started looking for something else, I would then find lots of white forma!!

Glenys here is the La Paloma topic .... Love it too

Strangely, I've mainly seen white Forma listed with Lilac Forma e.g. white saucers and plates with Lilac cups and bowls .... both on ebay and Trademe, which makes me wonder if that is how the sets were sold ..... ? I've never come across plain white Forma on all of my travels, but was so lucky to find the fabulous La Paloma and I wish I had got both of the lunch plates now.
When Val Monk came to visit recently I sorted out all of my tableware and found that I had very little Forma and Apollo, so now I make a point of getting them when I see them, which incidentally, isn't very often.
Good luck Thelma, I find if I let the Crown Lynn gods know that I'm looking for a particular item.... they let me easily find it ...... call it what you like - serendipity or karma or who knows wot ........ it may work for you too

This is what happens to it with constant use! I'd still buy it again. 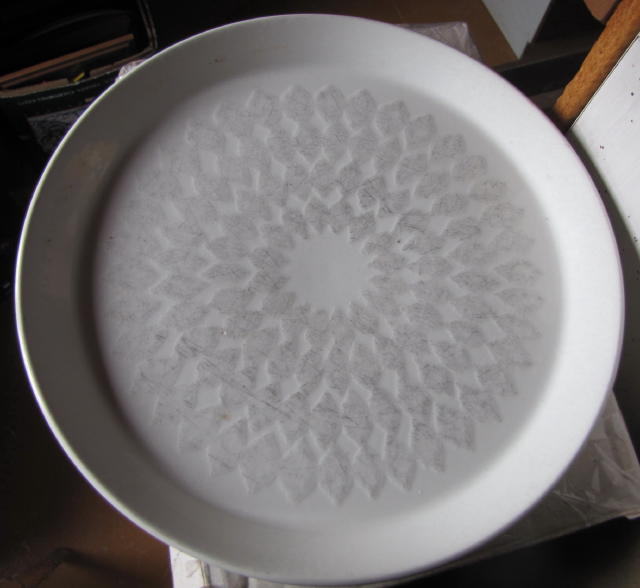 I'm not putting this image on the La Paloma topic. I'd prefer everyone thought it was marvellous all the time. It must be one of the rarest CL patterns.

PS Apollo white must have been the most popular pattern of all time!
I'd love to know just how much was made.

The main reason I chose Apollo at the time, (this was back in 1974 when I was saving up for leaving home) and there were many CL sets available, I can still remember seeing them all in the shop, priced as a set or individually. Apollo was about $45 for the 20 pc set, the cheapest one by far. Most of the others were $50 or more. This was back in the days before el cheapo imports of course. I think it took me the whole 3 months of layby to pay it off on my meagre wage. Over the years I added sugar bowls, salt and pepper shakers etc, but all I seem to have now is one of the salt shakers that didn't go with the son.
Your forma plate I don't think I have seen before but will certainly keep an eye out for it in future. it looks like it was easily marked by cutlery as some of the temuka stuff is.

I have a confession to make.
I just have to share this with people who would understand.
Last night I bought a part dinner set of Last Wave on T Me.
It cost a fortune but I was amazed that I outbid akiwigal who seems to have a bottomless purse and has bought all the other Last Wave that has been on T Me recently. I think I could only get it because it had to be picked up in ChCh and that is where were were last night! I was bidding from the dining room of the Hornby Workingmens Club and went straight out to pick it up. I worked on a 'per piece' price and then it didn't seem so bad!(25 pcs)
Now I really will have to sell ALL my other Crown Lynn. Well, what could compare with Last Wave anyway?
We now have to carry it around with us until we get back to Auckland and that won't be until at least the end of April.
Thelma, there

just may be some white Forma for sale then!

Love Landscape too Glenys and I was watching an auction for an eight piece set [42 pieces] that finished last night, but had to be picked up in Tauranga ...... it sold for $245 http://www.trademe.co.nz/Browse/Listing.aspx?id=565070828

Edits as I forgot to add this white Forma saucers auction from Trademe -
http://www.trademe.co.nz/Browse/Listing.aspx?id=566977502

Tee hee Glenys. I know how you feel. I once just HAD to buy a temuka dinner set that I found in Dunedin. It weighed a ton and the car was already full of children etc to go back home to Chch.

While you are in Chch check out the Eco shop down Blenheim Rd. Every time I am there I find a gem of some kind!

Thanks Ev, I will mainly be looking for plates etc. I already have a full set of filigree cups and saucers. Plus a nearly full set of Landscape which I bought bit by bit when it was still available for a dollar an item.

I saw that auction for Landscape. I was even tempted as my daughter lives in Tauranga and could have picked it up. (She's the one with the daughter "Bellamay") BUt for me Last Wave beats Landscape! Only just.
I've seen the Eco shop on Blemheim Road. Now I will have to stop there. Thanks for that tip Thelma.