Came across this little surprise today at an Antique Fair and asked about it's history.
The trader told me that she grew up in Tauranga and could remember the pottery sign at Welcome Bay.  I also grew up in Tauranga but have no recollection of any pottery sign, though I think the trader has a few years more wisdom than I .....
This piece feels and looks like a brick clay in coarseness and colour.
I would really like to find out more about the history of this pottery as Mr Google is not sharing any info about them. 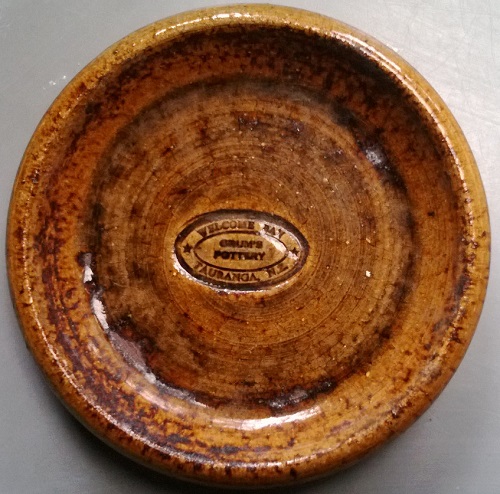 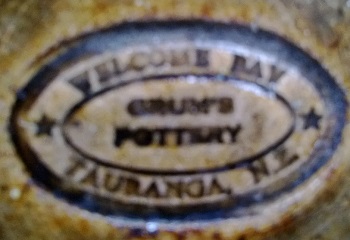 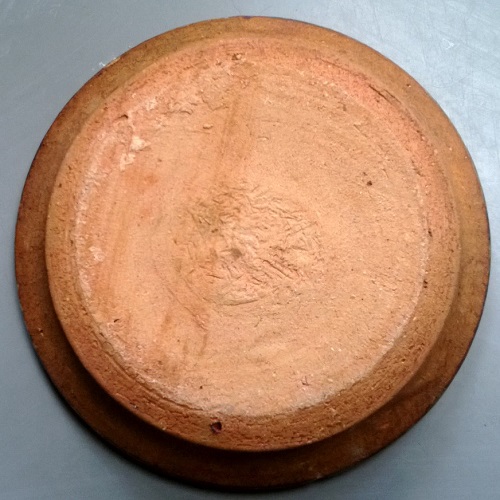 Is my uncle's old pottery. Graeme O'Donnell, his bro Michael is still a potter in Paeroa. They do (did) beautiful NZ pottery. Grum doesn't pot anymore due to overuse injuries I think.

Thank you so much rosieent, as I couldn't make out that the first letter was G.
I've often wondered about this pottery and would like to know what time frame they operated and would you have any examples of what they made?

He built the pottery in the early 80's then when they moved at the end of the 80's he had a factory in Birch Avenue that produced terracotta clay boots.
The old pottery which was under the house- he built on my Grandfathers old land. It was an amazing pottery and I was lucky enough to sometimes play with clay as a child down in the studio. There was a shop there too where the public could buy his work. I sometimes helped pack the boot orders. The glazes were beautiful!
He and his brothers and sisters are very talented.

Clayworker, vessel maker, sculptor, storyteller, internationally recognised. His workshop and gallery nestled amongst nature, mountains and stream invites you into a creative experience. Michael’s work is vibrant, in story, tradition, colour and form, a true reflection of the natural environment he is passionate about. Est. 1974. We are 1.5km South of Paeroa.

There are some big fans of Mike O'Donnell on this site including myself!

I wonder if you could help us rosient, I have been told that the potter who used this mark and made pots glazed in this red glaze was Mike O'Donnell's father. I have never found anyone that can confirm this one way other, so hopefully you can help.
http://newzealandpottery.forumotion.net/t4445-red-candlestick
Many thanks Ev.

Hi Ev- not sure. I will show Grum next time i see him and see what he thinks. Its a lovely glaze!

Hi there EV.......Im GRUM! Yes the small dish photographed was made by moi.....one of many hundreds probably.....I tended towards mass production in the day! They were used as a planter saucer for glazed earthenware planters we produced using some cheap red clay I was blending. We were specializing in Terracotta for a while then moved onto the clay boots which we produced by the thousands and even exported a couple of container loads to Oz. I fired these in a 300 cub. foot gas fired kiln I built myself using a 20' container lined with kaowool. It worked well and the whole process was successful.....employing up to about 8 workers at one stage. I eventually sold this business as a going concern. As you are already aware my famous (and very clever) brother Michael is still potting in Paeroa.......I taught him well! (just dont let him know I said that, he's bigger than me) Thank-you niece Rosie (Rosent) for filling in some of the gaps......a lot of memories still there of the early days in Welcome Bay. Hope this helps a bit? Regards Graeme (GRUM)

How absolutely fantastic to see you on here acknowledging your work GRUM !!
Congratulations as you are the 900th person to join our pottery site !!
It's great to get to the bottom of things pottery as there are so many mysteries out there. Thanks and Cheers Ev

......my pleasure EV! Im curious as to the "red candlestick holder" that is referred to on the same thread.....if I could only see a photo of it I might be able to confirm if it is one of the family pieces. Our father Brian (now deceased) was also a potter and we 3 worked together in the very early days (mid /late 70s) in Paeroa. We built 3 diesel fired brick kilns, one of which we carted over from Hamilton in pieces to re-assemble on site. We later used this for salt glazing. Regards. Graeme

Lets try this casserole to see if you can identify it as it has the same stamp and distinctive red glaze ... Thanks for your help.

[quote=...employing up to about 8 workers at one stage.  I eventually sold this business as a going concern. [/quote]

A footnote to this story. Referring to Gail Henry's book (p162, New Edition, 1999)
"In 1997 Chris left the family business . . . he has been potting in Tauranga at Grums Pottery." I am wondering, did Cam & Dorothy Brown's son Chris work there before or after Grum sold? Just curious.

I'm curious too now that you have pointed that out.
Very astute of you to pick up on it Roodkapje.
Gail Henry says that Chris started Hobby Ceramics in 1978/1979 and I know it was going strong during the 1980's and was still going in the mid 1990's.
There were many Hobby Ceramic businesses not just the ones run by Chris.
Hopefully GRUM will see this and let us know before too long.

And another question for you GRUM! Do you have any examples of your work that you could photograph and either put them on the site, or email them to Ev or Kat to put on the site. Was all your work marked? I am sure there are a lot of NZ made planters in terracotta and other clays which we don't recognise as made in NZ. Which troubles me!
Nice to meet you
Val Monk

I have been asked to check with Graeme O'Donnell to see if this is his work and mark.
Beautiful work.  Please let us know.  Many thanks ... 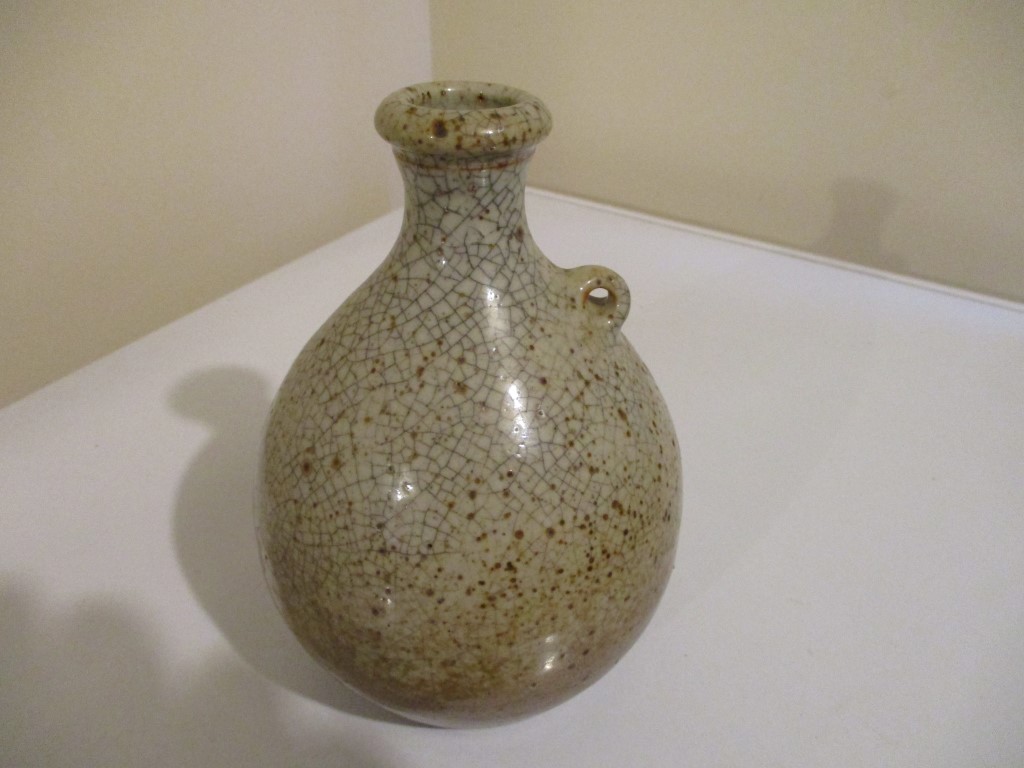 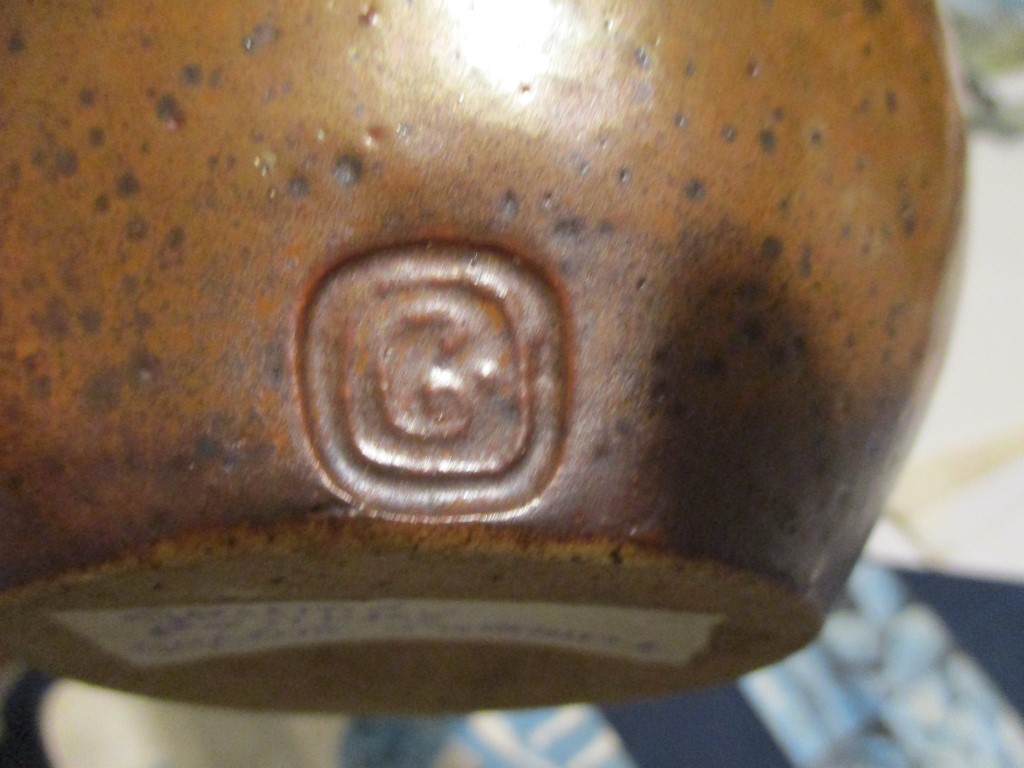 Edits to add that this mark has been confirmed as that of Graeme O'Donnell thanks to acdc1971.

Thanks to acdc1971 for confirming the work of Graeme O'Donnell

He made some glorious pottery!! Very exciting thanks Tony!! 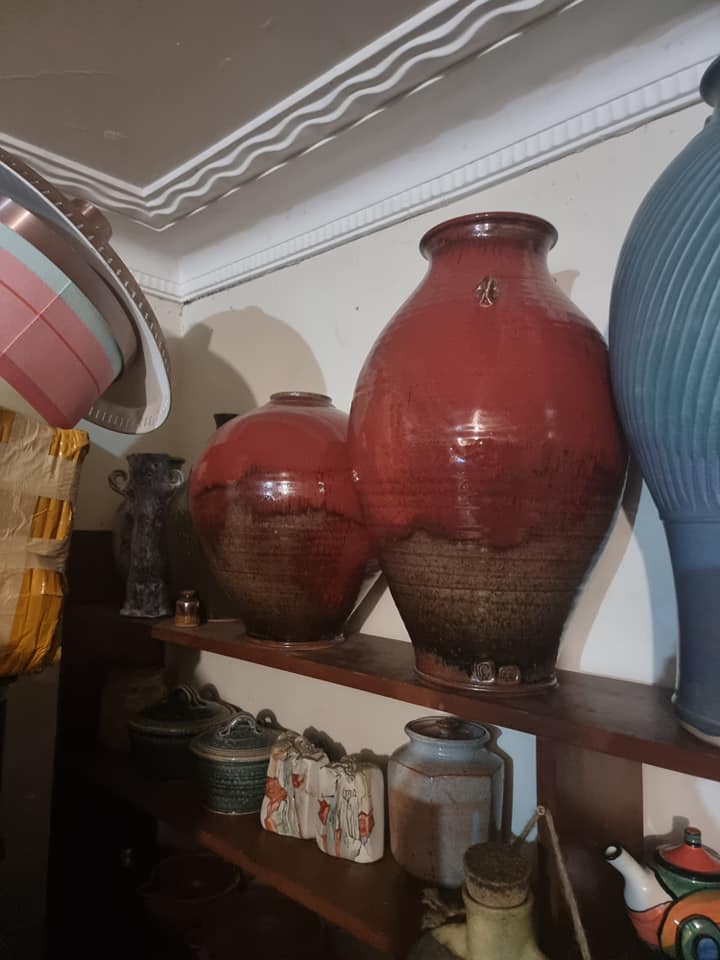 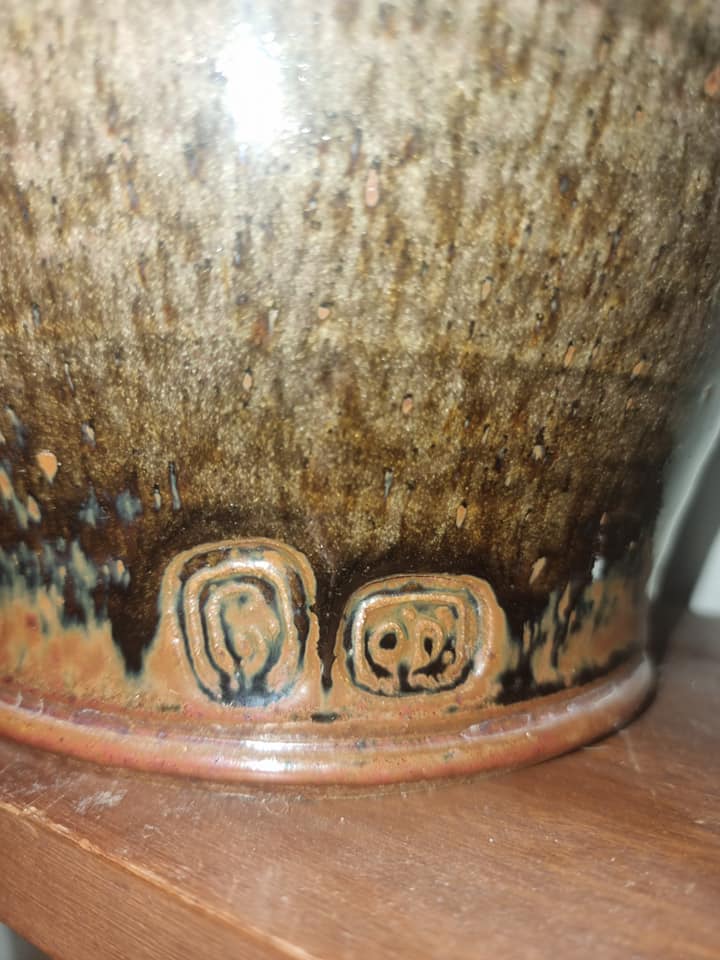 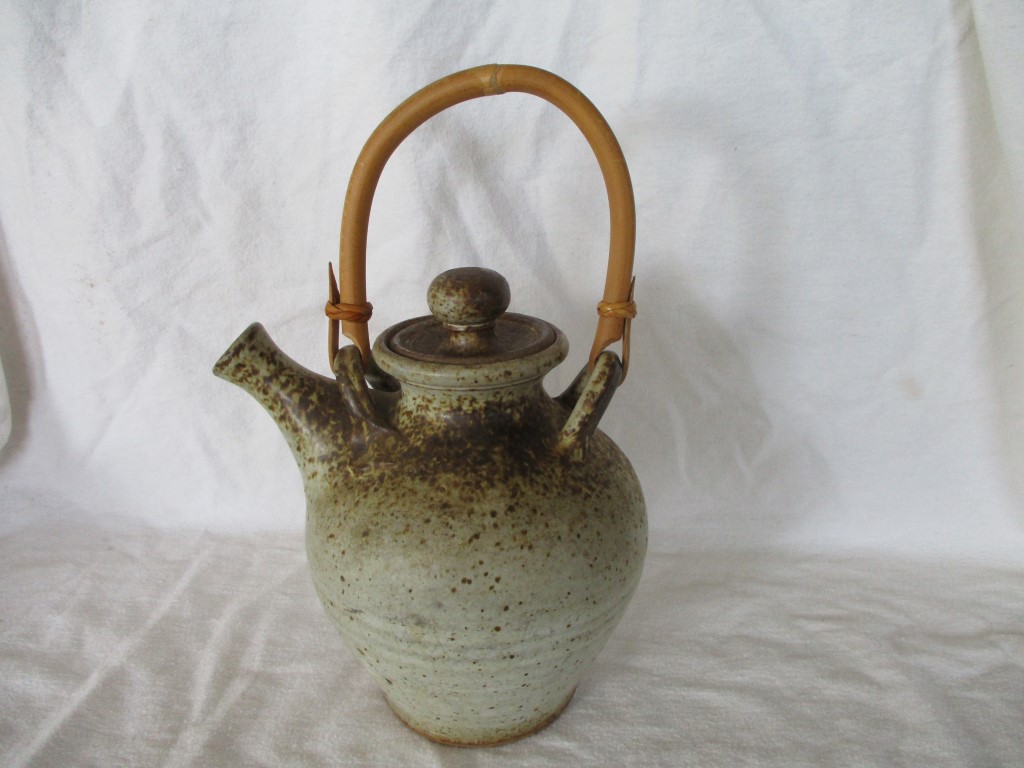 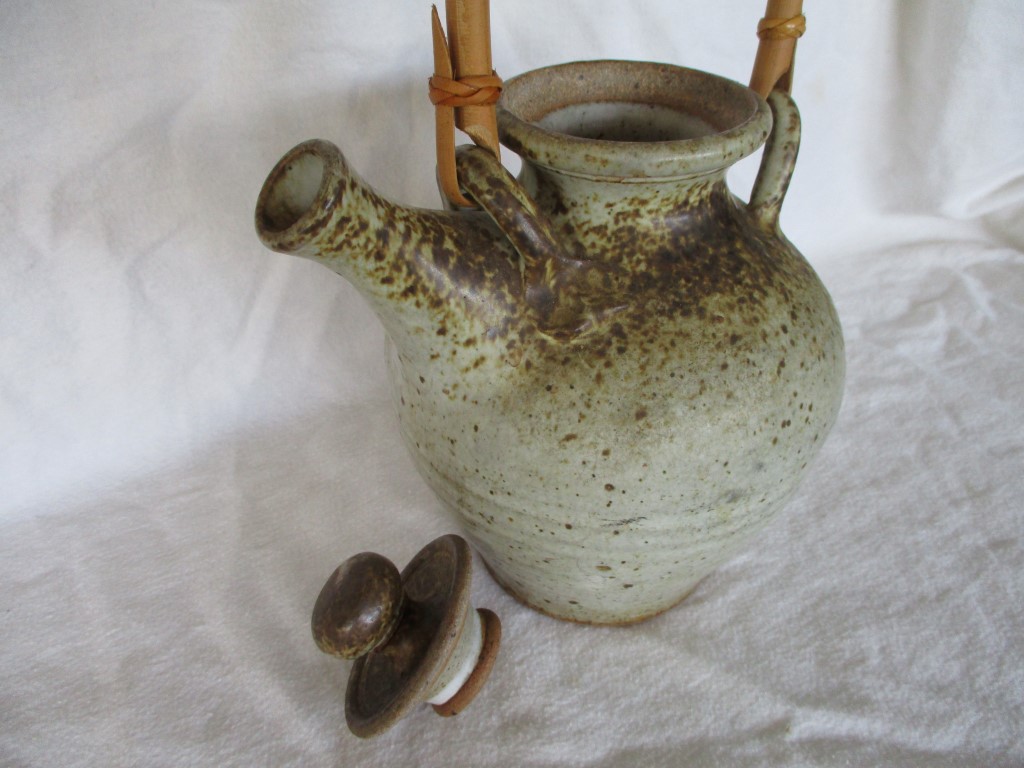