FYI--  I heard that on 10th Nov. there is a Retro Fair In Auckland..
You may already know, however for those who don't it could be a fun day out and a  chance to stock up our already loaded shelves, with goodies? ...... I've marked my diary 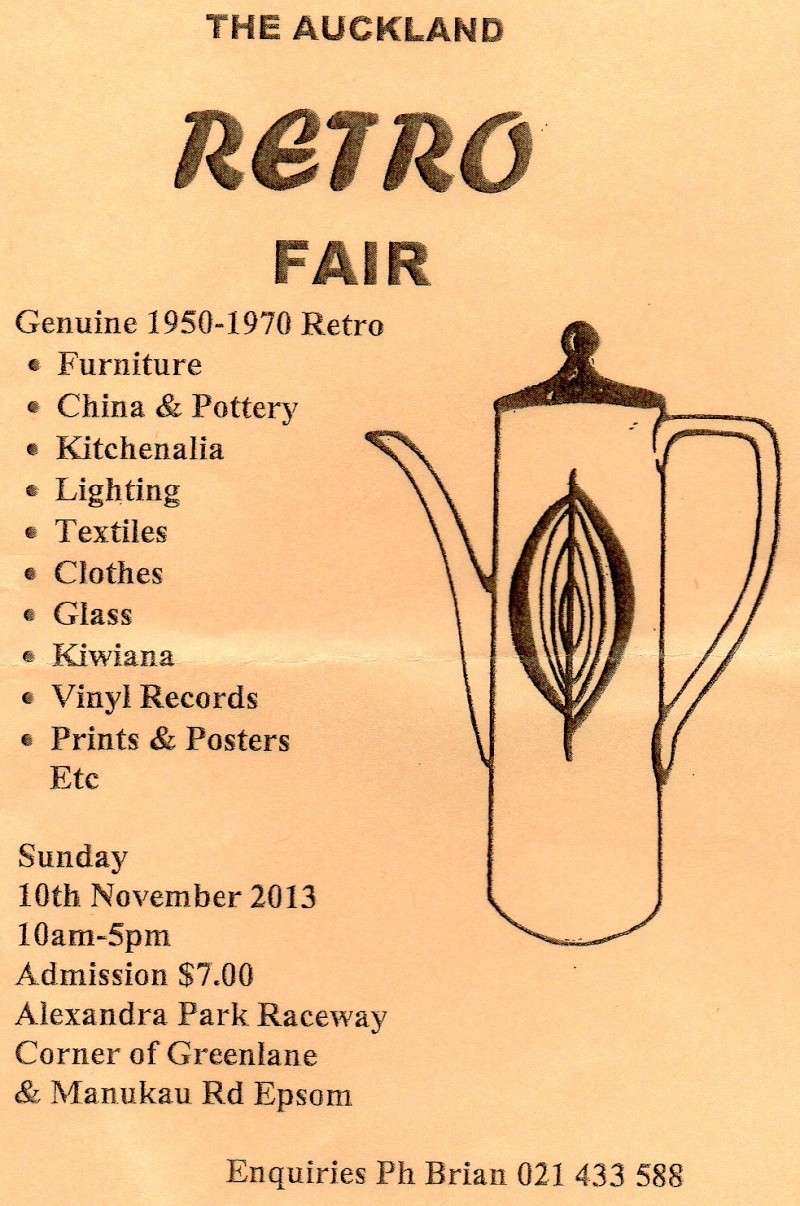 look at the illustration

The illustration is interesting.

I don't recognise the jug style but the pattern looks suspiciously like a piece of either:

I agree with you there Jeremy .... I instantly thought of Napoli coffee cups. Though that coffee pot doesn't look like any that Crown Lynn made!

I went to the Antique Fair a couple of months ago at Alexandra Park and thoroughly enjoyed myself and I hope I can go to this too.

Unusually, I think we will be in Auckland that weekend too!

I think I need to track down someone who's running a stand and do some selling.
It sounds, it LOOKS, like the perfect market for Cook & Serve.

Had a fantastic day at the Retro Fair!
Jeremy found me and it was great to meet him.
SueEllen had a stand so I introduced myself.
Alison Reid had a marvellous stand and I got a few new patterns and a paris cup and plate from her and she may have added a side plate to my stash.
Crown Lynn was everywhere!  I managed to find several .... [actually I lost count] new patterns and some that are in the Patterns book too!
Titian, Temuka, Studio Pottery was well represented as well.
I got a darling little cup that must be like the IGA ones ........ awwwwwww
Haven't unpacked it all yet, but will take photos over the next few days.
We moved onto two Studio Pottery Open Days and enjoyed the company of fellow potters.
I got a little bottle made by Mark Goody which is just brilliant!
We were extremely privileged to get to see Peter Lange's pottery collection which was  breathtaking!!

I managed to squeeze in a quick visit to Avondale market before the Retro Fair, fortunately I must have bought everything on my previous visit. I did see two Royal
Oak teapots, both seriously distressed so $3 was way too much. I did get a KilnCraft canister for $2 and will post that eventually.
http://newzealandpottery.forumotion.net/t4117-royal-oak-blue-and-brown#14562
http://newzealandpottery.forumotion.net/t190-kilncraft#14578
Nicole said she wouldn't come to the fair because I'd be talking to all sorts of people and I replied the only one I would recognise would be Ev, as she has a photo of herself on the forum. And as you already know we did meet. I was just leaving as I saw someone picking out an unusually patterned CL plate at the very first stall, and I thought can it be? I dragged Ev over to look at an Orzel Manhattan vase I would have liked but at $55 it seemed a bit much. Trust Ev to point out what I had missed: it was flanked by an Aquila wine bottle and a relatively cheap Titian vase! What Ev didn't see we're the two smaller pieces of Manhattan because they were in a plastic bag in my hand. I have picked up a bit of Manhattan lately and will be posting them when I have them all together.
http://newzealandpottery.forumotion.net/t3021-does-anyone-have-any-of-the-so-called-crown-lynn-metropolitan-series-which-is-in-fact-orzel#14571


Ev, lovely to meet you. Thanks for reassuring me about that vase. I sometimes spend too much but I do hate to miss out. I was tempted again by the one on tm but as you will have noted I didn't bid on that either. (I had to find something else to distract myself with as the auction closed.)