VISION ... a name without a pattern.

[NB Since this topic was written Ev has discovered which pattern the name Vision belongs to. Read on. JA 7/1/14]

Vision...at this stage we can only guess.

On page 76 of Crown Lynn A New Zealand Icon, Val Monk wrote: (with respect to the Cook & Serve Range) "The first designs were Narvik, Vision, Blue Tango and Green Bamboo."

Narvik, Blue Tango and Green Bamboo are old favourites we are all familiar with (and I like many of you have pieces of Crown Lynn in these patterns) BUT WHAT ABOUT VISION?

No one has yet produced a piece of Crown Lynn in the "Vision" pattern for the gallery. Did the pattern ever even go into production? I'm looking for answers.

Yesterday I bought my first ever piece of Otway Josling's 1959 Ceramic Design Awards winner "Reflections". Josling also took a second place in the competition in 1960 but his design for that year is not stated in our record of the Awards:
http://newzealandpottery.forumotion.net/t887-crown-lynn-design-awards#2240

Last night it occurred to me that I have a pattern without a name and we also have a name without a pattern, so I put the two together (like a Reflections duo):
http://newzealandpottery.forumotion.net/t1122p60-crown-lynn-cook-serve-coffee-cans#14634 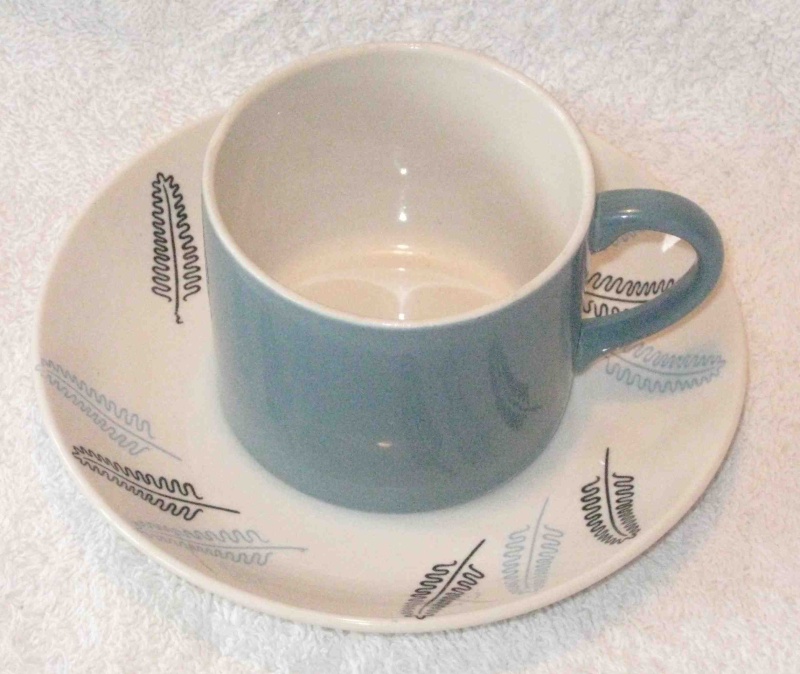 The unnamed pattern illustrated is so like Josling's Reflections that there must be some connection. Then again, it is highly unlikely that Josling would enter such a similar design in the following year's competition, and get a second place, so now we are not just looking for a pattern called Vision but also for a further Josling design, which in all likelihood is completely different.

In this topic I hope that others will add illustrations of other unnamed patterns in the hope that we can track down an answer to this puzzle. So...
... firstly, can anyone else provide examples of the above design used elsewhere?
... secondly, can anyone provide a pattern without name, SPECIFICALLY ONE THAT WAS USED ON COOK & SERVE FROM THE EARLY 1960s.

I am pretty ignorant of most of those patterns, but nothing immediately stands out.

I do have one other contender for "Vision" but that would be cheekier than anything else I've seen from Crown Lynn so far. That is, Marianne Westman's "Tango" pattern as seen on Rorstrand Sweden coffee sets.
Crown Lynn did use the pattern on Cook and Serve bakeware, on pepper, salt and mustard, and a lidded ramekin, without benefit of a name, but as far as I am aware not on coffee cans. Crown Lynn had its own Tango design, "Blue Tango". 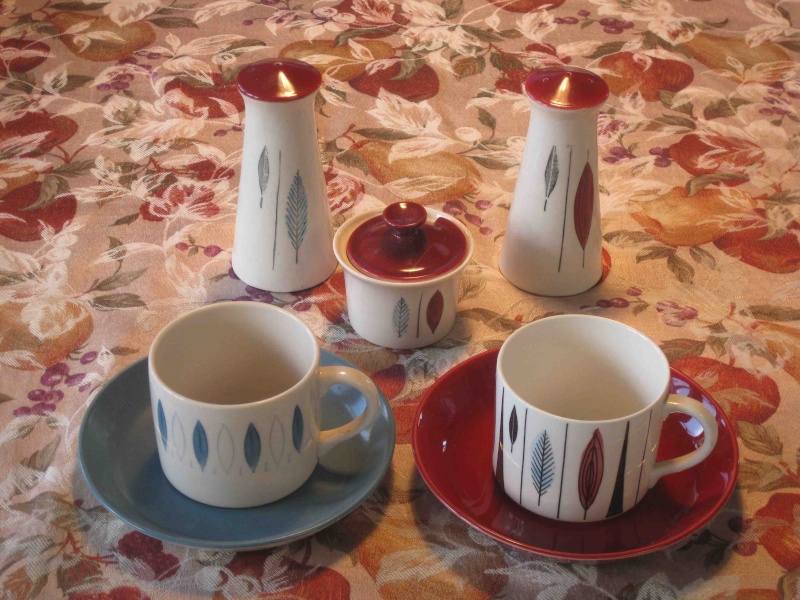 I have no idea when Crown Lynn used this pattern, but I suspect it was later rather than sooner.

I just happened across a list of Crown Lynn patterns that I found in some scrapbooks from 1966 - 1967 at the Museum Library. These were adverts from magazines and the like, so there was a photo and a name. Mostly there wasn't a number.
The good news is that Vision is on the list !!!!!!!!!!
I will be checking this out next time I'm at the Museum that's for sure!

my take on Reflections

have never seen that lovely cook and surf saucer, but I could,nt resist posting my teal set of C/S/plates ,stamped on everey item

Last edited by hendelglass on Thu 5 Dec - 17:56; edited 2 times in total (Reason for editing : did not manage my first picture on my own. were are you Kat.?)

please be patience , I have some hick ups  on how to put the picture on. 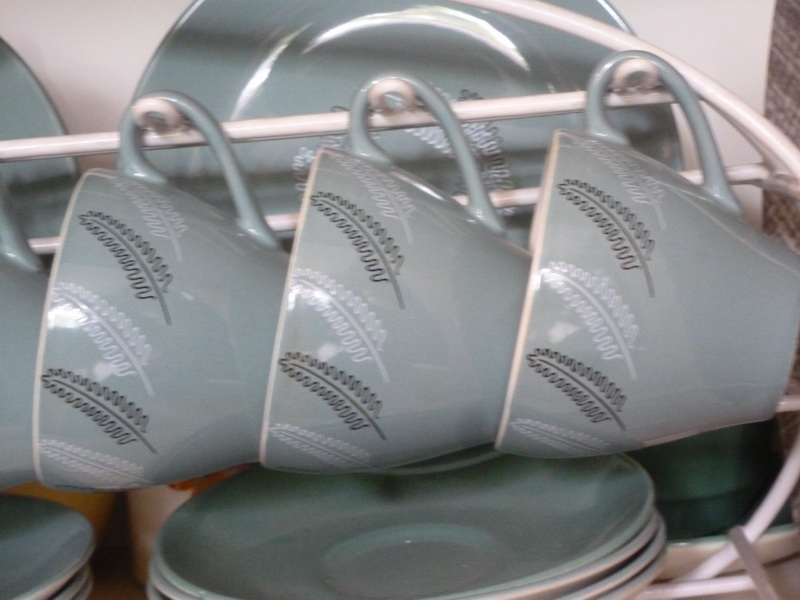 So far I have only ever seen a dinner plate that looked alike,  your cup and saucer set most be very rare 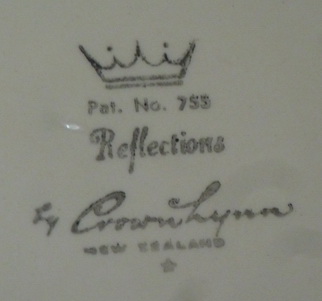 Sideplates have the interwoven ferns design. 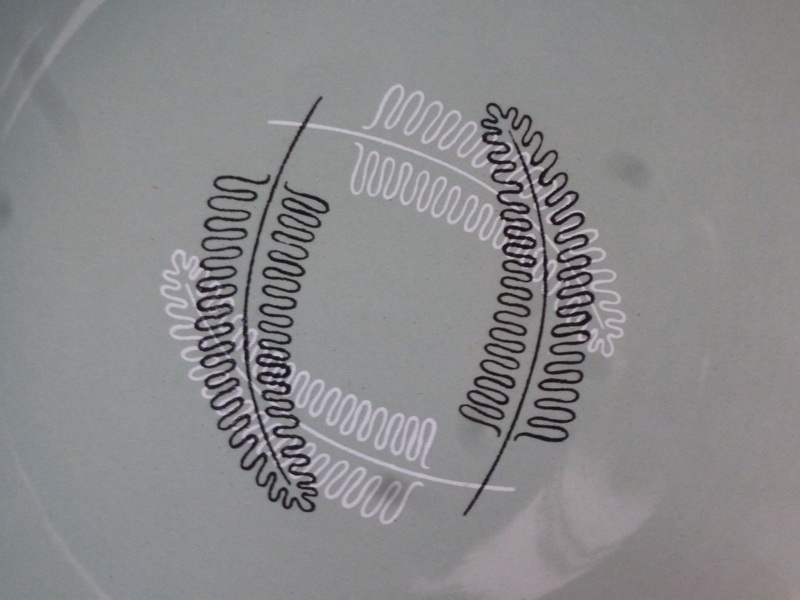 Finally a picture of Reflections on Teal. Thanks hendelglass.

If my "Vision" IS Reflections,
then I have two completely different Reflections cans duos.

Jeremy I have checked my reference for the name Vision... see below. I don't have a copy of this edition of NZ Ceramics, it probably came from the Auckland Museum Library.  It is weird that we haven't found an example... here's hoping!

Thanks to Ev for finding a pattern to the name Vision.
http://newzealandpottery.forumotion.net/t3897-jeremy-will-enjoy-seeing-this-ramekin-with-the-rorstand-design-that-is-called-vision#15657
It is option two: the Rorstrand pattern from their coffee cans.

This means that the Crown Lynn coffee can saucer above is not Vision.
Following contributions to this topic I will now consider it to be a variation of Reflections pattern 755 as seen on hendelglass's Teal set (rather than 842), although the third colour is definitely blue and not teal. It may yet turn out to have another, third, reflections number.