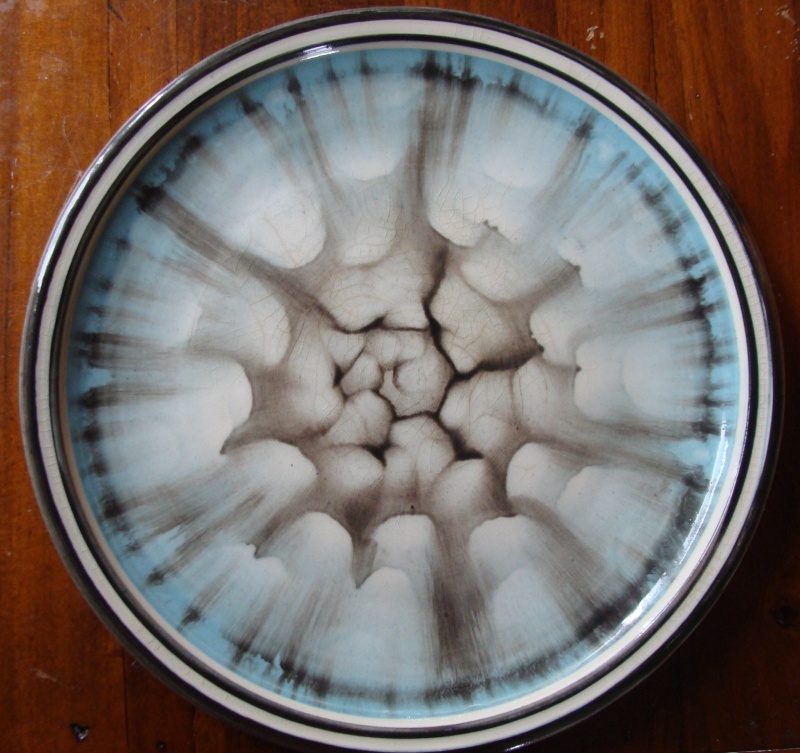 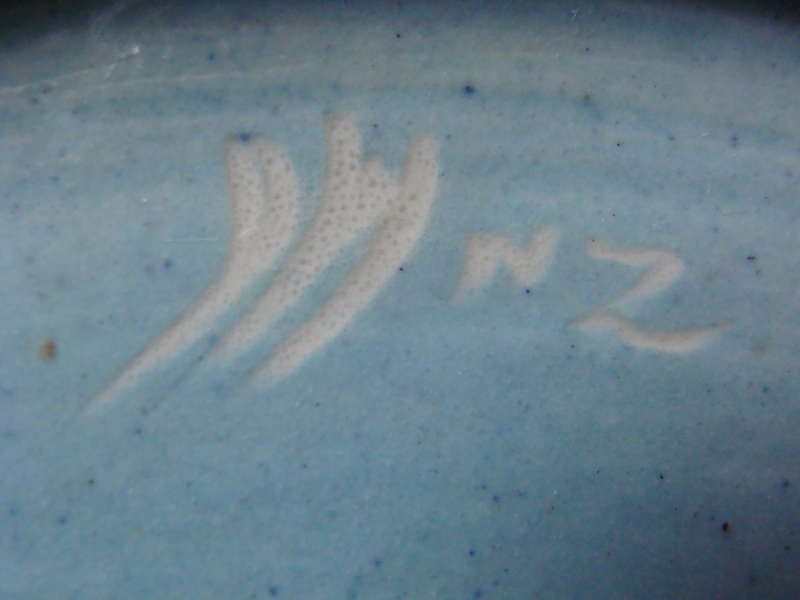 That is awesome Cat!! I have added the mark to the gallery too - Thank you!

That mark looks like Paul Walshe to me Cat ...... could you check it out?

I am not certain Either way - Paul Walshe was one I considered, and having the NZ there too.. hmmmm

The washed glaze is reminiscent of Paul's work, but this mark is tiny and quite controlled, paul's do tend to be larger and 'looser', his marks also tend to be glaze filled, whereas this one is incised through the glaze.

Paul's "z"s that I have seen have a straight bottom line, and this has a definite wiggle...

I don't think it looks like Paul Walshe, as he usually does his more vertically, and this mark is horizontal and looks to be slanting backwards a little. Paul's mark also looks to be made from long downward strokes, but this mark does not give that impression.
This auction also has NZ http://www.trademe.co.nz/pottery-glass/porcelain-pottery/other-nz-manufacturers/auction-680688909.htm and see the mark on my pot http://newzealandpottery.forumotion.net/t3868-paul-walshe?highlight=paul+walshe where the P and W are quite defined.
Probably not too much help, but it is more similar I think to Cabbagetree pottery.

Check out this auction, even though you need a magnifying glass I can see the similar mark - http://www.trademe.co.nz/antiques-collectables/art-deco-retro/kitchenware/auction-675316176.htm

That is one beautiful plate Cat !!

I tend to agree, there are too many dissimilarities with the Paul Walshe's marks that I have seen. A pity I can't track down any examples of cabbage tree's work. Would be interesting to know who is/are the potter/s involved.

Editing because of Ev's latest post -
WOW Ev, I agree that that platter has aboslutely been made by the same hand as mine, but I would be interested in the provenance of the mark, i.e. how have they identified that mark as being Paul Walshe's. I might ask them a wee question on one of their ther listings (once I'm over the whole earthquake shock here)

Fantastic if it is, I just want to be as sure as possible, either way!

Earthquake?  I must check out Geonet ..... oh wow 3.5 that would let you know what is happening ...... Hugs!
I've seen that mark credited to Paul Walshe many times, but I also have self doubts as his glazing practices are pretty boring unlike this plate of yours and that splatter plate.
The Cabbage Tree Pottery is pretty much an enigma.  I've never seen any of their work and heard that they worked on the North Shore, Auckland and I have asked around, as their mark shows up in the Potters Marks book.   I can only find one reference to their work on Trade Me from 2011 .... goblets and no images.  That is why I like to see not only a potters mark, but a piece of their work, so that there is some guide to confirm who made the pottery.

Fell down the stairs and everything lol, bruised but ok.

We had just spent an hour unpacking breakables from  when we moved here over 3 years ago.

Found my Doris Dutch trinket box, my partner had brought it upstairs from where I'd put it on the piano after unpacking. I had just finished washing it, in preparation for photos, put it on the table, walked 4 feet to get my camera, and that's when the earthquake hit! (it survived!)

ALl my NZ pottery survived intact, a couple had a very lucky escape (stichbury and pat neighbour jugs) after nearly going out the window. I had just today brought a lot of stuff down from a high shelf in prep for blu-tacking, but it all survived anyway, as did my entire (blu-tacked) glass collection.

OMG Cat it all sounds so scary ..... and yes I saw that the biggest was 6.3 !!!!
Please take good care of yourselves and don't worry about the pottery! *BIG HUGS*

Yes Cat, take care, and I hope you are all safe and well. It was bad enough here in Nelson, so it must have felt B awful for you up there!

Have given my shoulder a bit of a wrench too, the aches are setting in a bit now the adrenaline has faded!

At least we are far enough away that the aftershocks aren't too much of a bother, but it could be interesting getting to sleep tonight..

ACK!!!!! Just as I post that, another good wee jolt spikes the adrenaline again...

Really feeling for the folks closer to the epicentre.

I wish we could look up this old listing http://www.trademe.co.nz/Browse/Listing.aspx?id=481684119, or ask Paul Walshe?

I think this is cabbage tree again:

Just to recap - this work is definitely not Paul Walshe's and as the Cabbage Tree Pottery mark doesn't even look like PW on a lean, I can't see that it is their work either.

Sigh, back to the drawing board then...

FUnnily enough, I have the above platter on my watchlist