Old cup.
What shape is this one.
I presume three digit rather than four.
The handle says not 753. 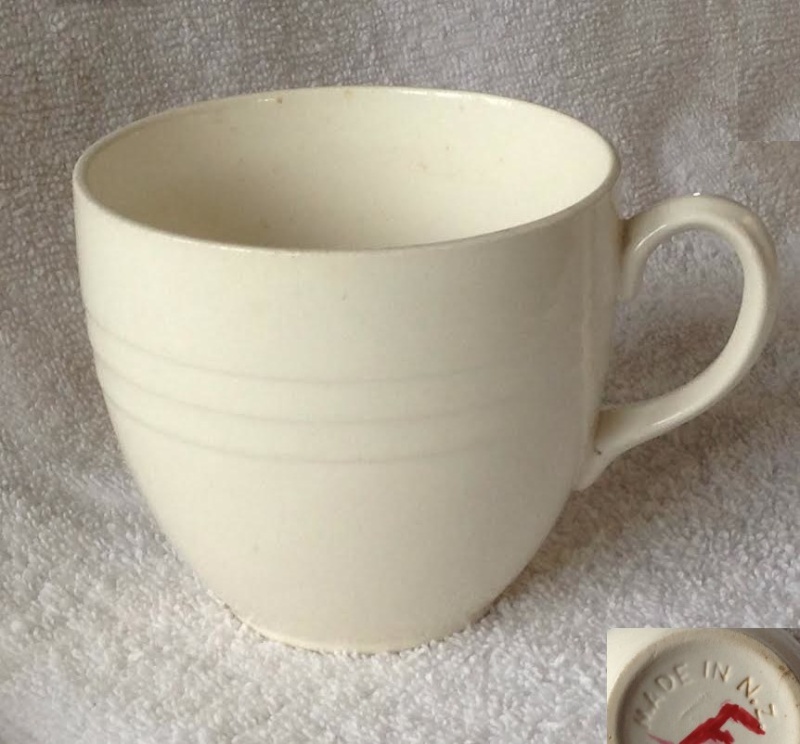 Oh its really different especially the backstamp..is it paris coloured? it looks whiter?

Kat, what you see is what you get.
This is one out of the SPCA box I was telling you about.
This sort of stuff is well out of my comfort zone. It was seeing Arna's cup (or was it yours?) today that got me started. I couldn't find anything to match in the galleries, or the "rattling" topic and it only then occurred to me to search the Paris topics, just before I had to head out to my meeting. It was a last minute edit that put "Paris" in the title, etc.
I think it looks like the cup in this topic:
http://newzealandpottery.forumotion.net/t816-paris-tableware-made-by-ambrico-from-1943#14577
and looks like it should sit on mrmarna's saucer in this topic:
http://newzealandpottery.forumotion.net/t1068-ambrico-paris-ware-saucer-and-backstamp#2710
I know nothing of the backstamps and the proper colours, patterns etc.
This is plain white or off-white and in very good condition. The handle appears to match the one in the first topic, but less so the one on p22 of CL Icon.
I haven't found anything yet with the impressed "MADE IN N.Z." mark.
I'll leave it to the experts.

I have never seen one of these cups "in the flesh", so I am of no help...
What number would this be? umm would have to go through the pages of shapes.. hold that thought

We don't have that backstamp Jeremy and I've never seen this impressed mark before. I would like a larger pic to put into the Backstamp Gallery please. I'm not sure that this shape is in the records as these were made so early in the story .....?

Ev, I managed to get the red off with acetone but the light is so bad today that bringing it into focus on the iPad (my only useable camera) makes it so dark it's unusable. I will try again tomorrow. 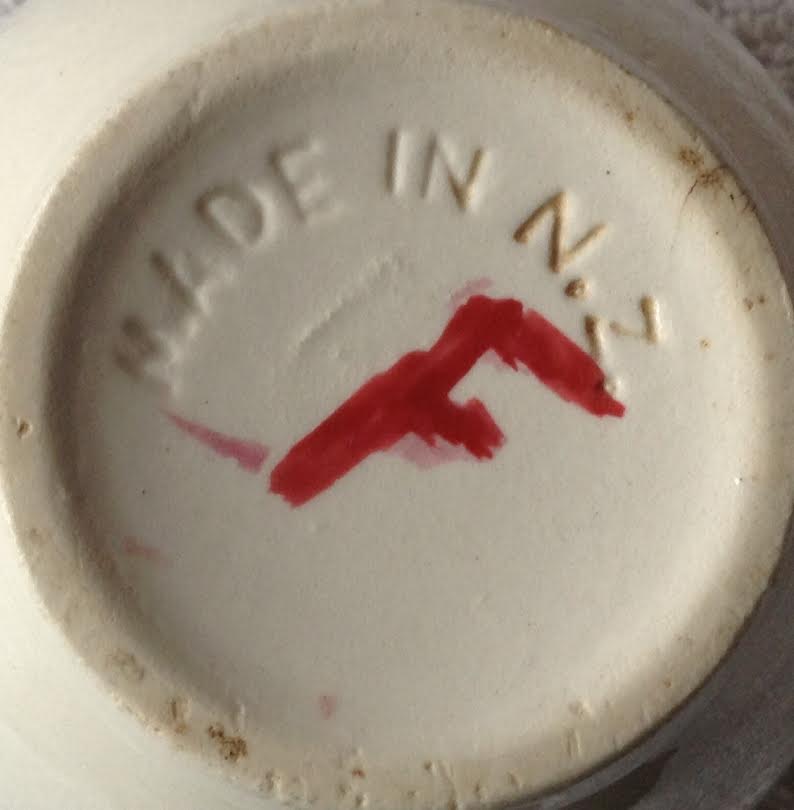 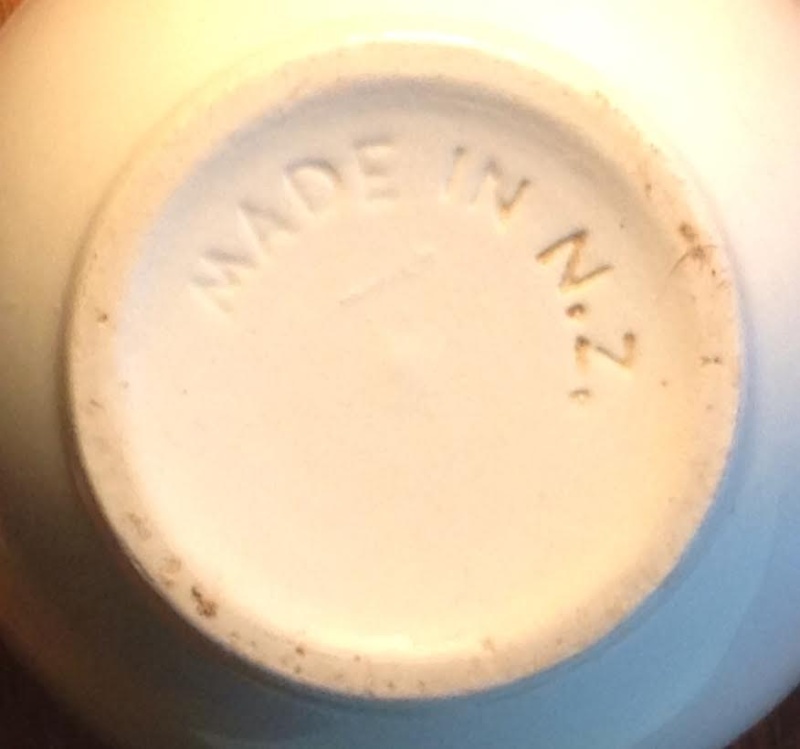 Thanks Jeremy that will be fine

My white Paris cup now has a matching white saucer after a trade with Jim. 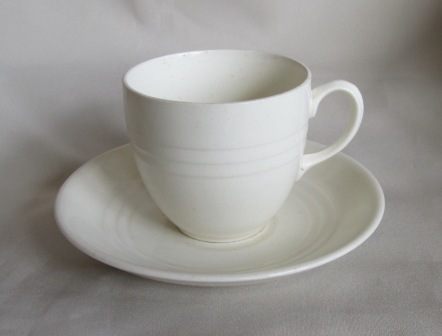 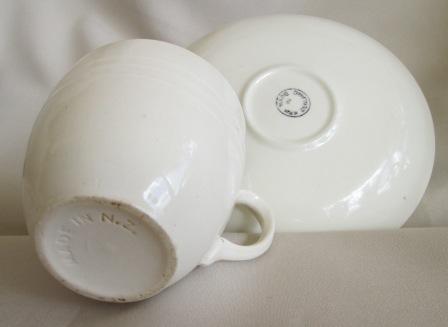 A happy reunion no doubt

I adore this old ware as it was what the company was built upon and didn't they do well !!

Well, my lengthy document expired as I was fine tuning so here goes again. 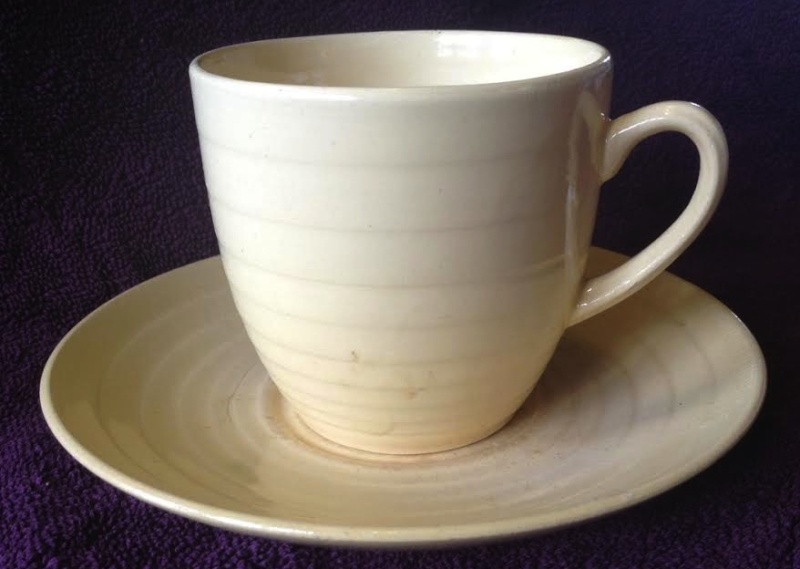 I have just bought three more Paris duos.
Theoretically I can date the cups as exactly 1948 as they have straw-coloured body (replaced by white body in 1948) in combination with the 1948-1955 "cursive variant" "Crown Lynn New Zealand" backstamp. The saucers that came with them MAY be another matter as they have the brown "Made in N.Z." Ambrico stamps.
http://www.trademe.co.nz/Pottery-glass/auction-744767534.htm

It is curious that I will soon have a white-body saucer with an Ambrico stamp (as illustrated earlier in this topic) and a straw-body cup with a Crown Lynn stamp!

I will post a new reply when I have my own photo of the new duos.

---------
Later ...
The reason for the apparent discrepancy in dates is that the white Paris is vitrified!
http://newzealandpottery.forumotion.net/t5334-vitrified-paris-ware#20031

With this new awareness I'm inclined to think the white vitrified Paris is older than I had previously thought, although the dating from the backstamps puts it anywhere within the 1943 to 1950 period. So little is known about the impressed mark on the cup that currently it is of no use either for dating purposes. And although the pattern on cup and saucer match, the two pieces have come from different sources so there may be no correlation in their dates of manufacture.

The style of the duo, is somewhere between the fully banded early Paris and the later smooth-sided cups of 1948. I think the best way to determine age might be to isolate an early example of the smooth-sided cup. I will seek out a date from advertisements published in Australia showing smooth sided cups.

Done. One 1945 advert shows the existence of the smooth-sided Ambrico cup from as early as March 23rd, prior to German surrender on May 8th. The advert from August 17th, linked below, has a better picture, but is still the same cup.
http://trove.nla.gov.au/ndp/del/article/142086571

The date of the first advert indicates that the cups shown would have been formed on a "home-built stamping machine" rather than English machines which were imported AFTER WWII : See Val Monk CL Collectors Guide page 110.

My three new Paris duos arrived.
I speculated about their age above concluding that with the straw clay and 48-55 mark they must be 1948 but I notice that the cups are paler than my earlier set, although still not exactly white, which could perhaps make them later. The saucers are a match for one Kat gave me earlier, brown circle stamp, and the fit to the cups is very sloppy, however this is three duos not one so they may have always been matched. 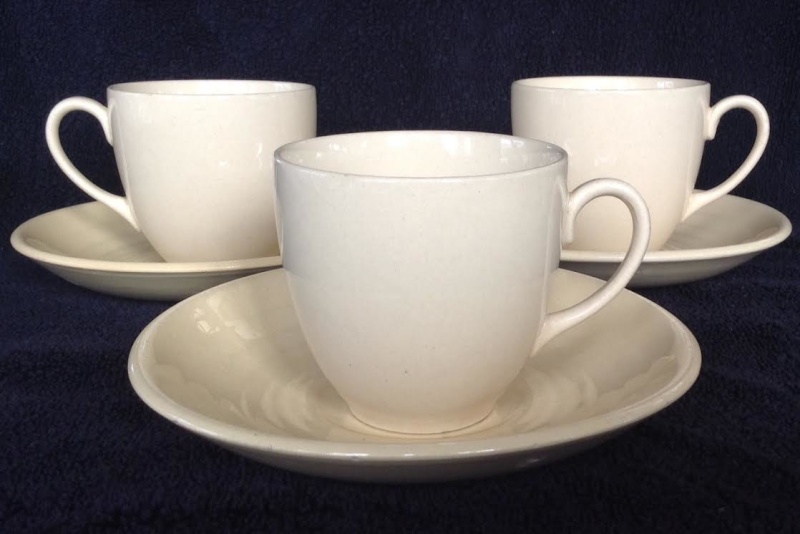 Three different Paris duos in what I have been thinking is chronological order: 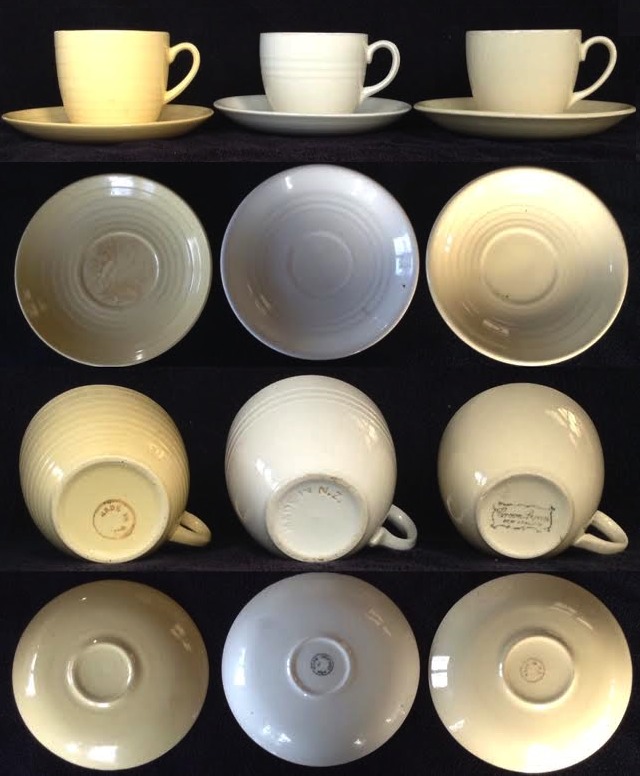 I still have doubts.

Paris cups by style, top, and by colour: 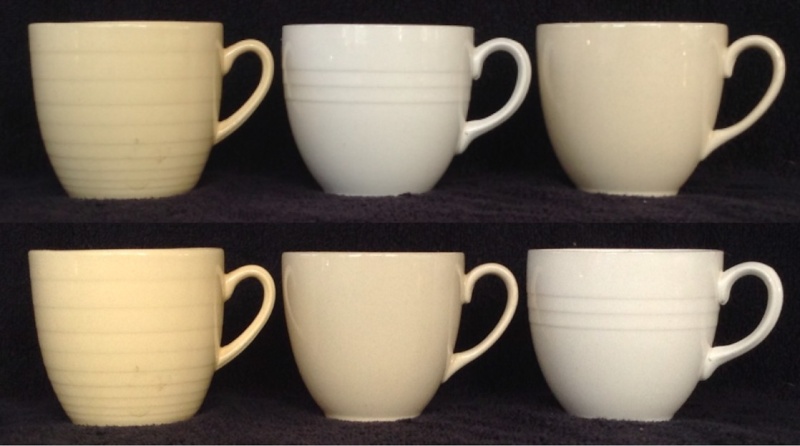 The new one is less yellow than the first but nothing like as white as the vitrified.
The two earthenware cups are the same height and OD at top but the smooth-sided one has more tuck-in at the bottom and consequently a smaller foot ring.
The vitrified cup is wider than the earthenware ones at the top and has a footring size between them. Handles are similar styles but all different.

---------
15/8/14
I believe these latest cups are the ones seen in the "Potters Wheel" movie in the scene of handles being attached which would make them consistent with 1949 production:
http://www.nzonscreen.com/title/from-potters-wheel-to-mass-productions-1949 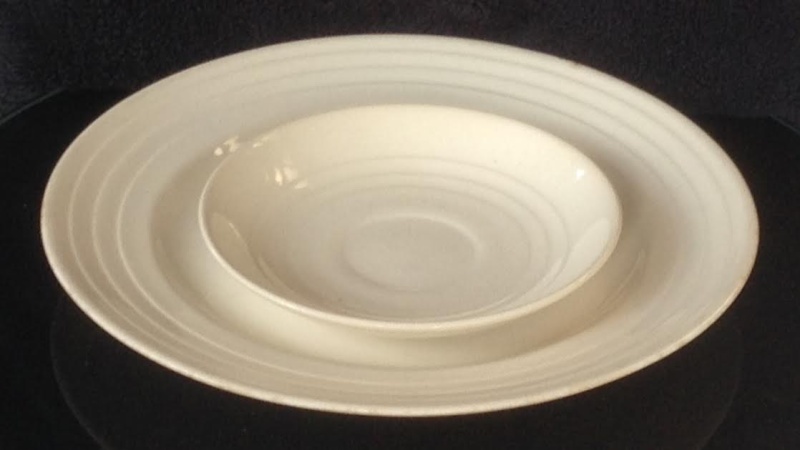 Read what I have to say about them here:
http://newzealandpottery.forumotion.net/t5334-vitrified-paris-ware-and-early-white-earthenware-paris#20034

I now have FOUR different Ambrico (Paris) cup shapes, having recently bought a block-handle one on trademe as part of a trio.

I will post a montage pic when I am up and about.

In the meantime here is the tm listing for the new arrival:
http://www.trademe.co.nz/Pottery-glass/Porcelain-pottery/Crown-Lynn/Cups-saucers/auction-801790920.htm

This still leaves the one in the Aussie ads to get, smooth sides and pointy handle.

Are they all considered to be "Paris" or just the step-sided ones?

Paris or 753 or both, block handle Ambrico, early cup shapes

I'm adding it to the Paris link as I have seen the same shape on Paris saucer sold as Paris on TM. I believe it is an early example of the 753 shape. The colour is off-white (clear glaze) but not the full-on straw colour of the Ambrico cups. No damage but lots of trapped dust etc as expected in these early cups. Same quality as my Paris cups. It is very very fine china for CL. No marks on base.

I'm pretty sure this is the cup seen in the 1949 CL movie, having handle fitted:
http://www.nzonscreen.com/title/from-potters-wheel-to-mass-production-1949 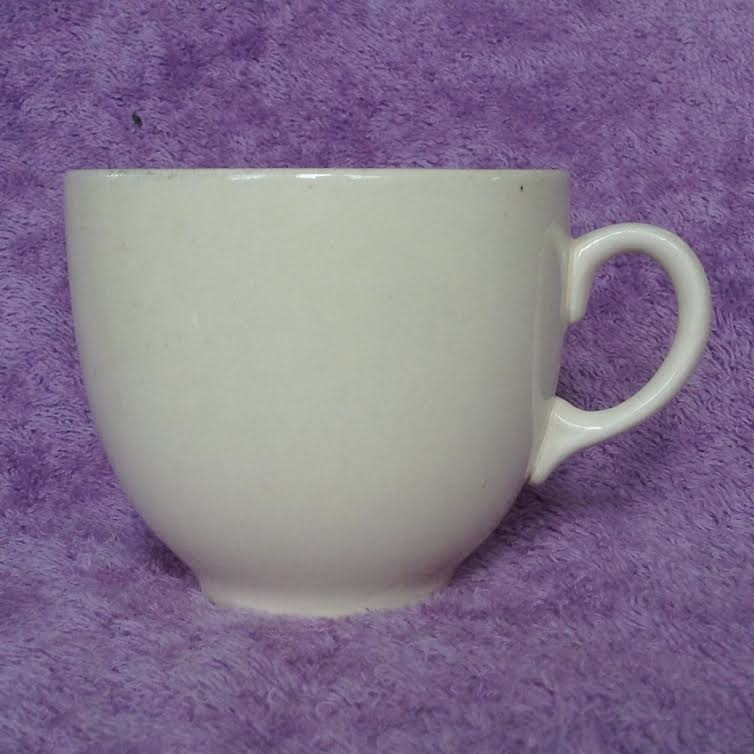 Here's one of my block handle Ambrico cups. 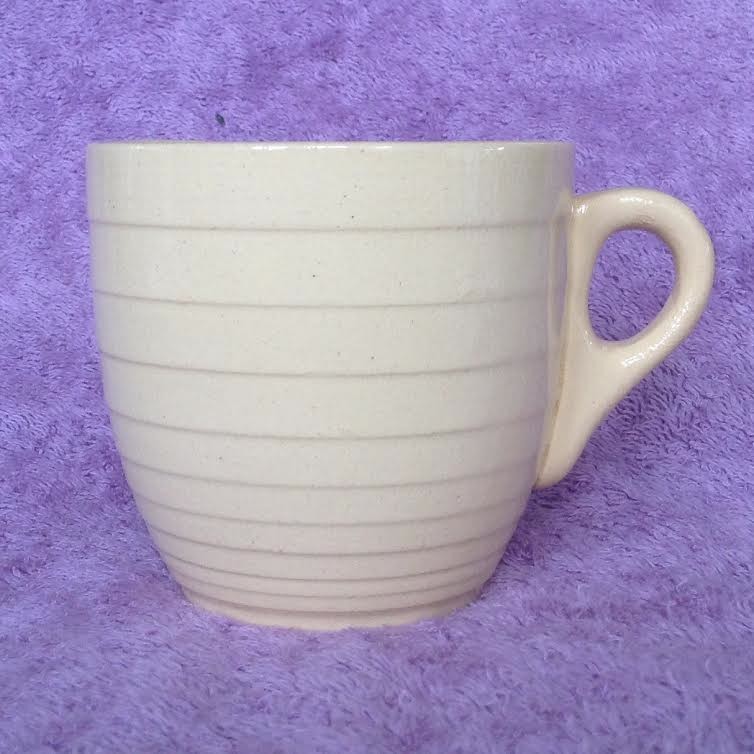 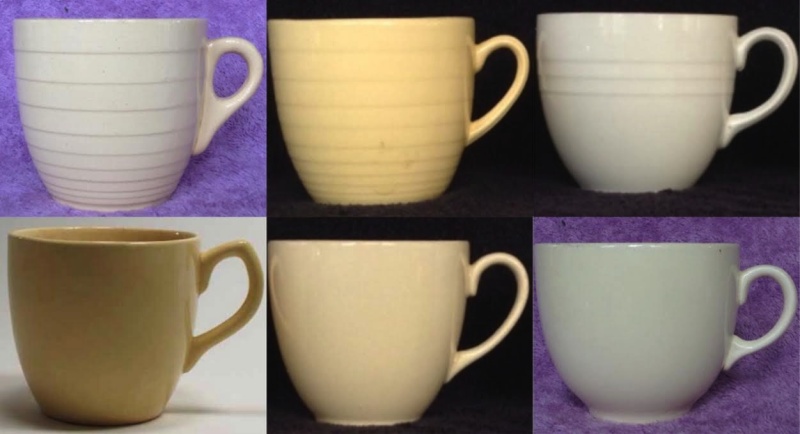 I took my new cup into Rainbows Relics to compare with a 753 they have for sale as part of a part dinner set. 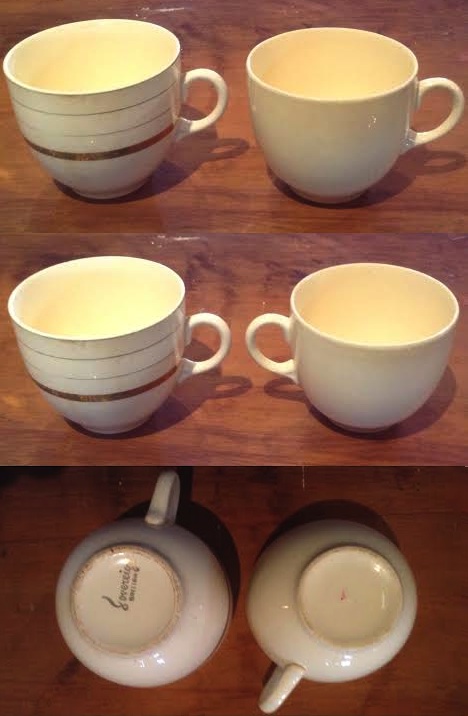 I'd say now that it is "pre-753":
effectively the same shape but measurably smaller.
Both are of the very fine pre-1960s china.

I have also made a montage with new cup and a screenshot from the 1949 Potters Wheel film. The handles are the same but the cup in the film may be taller (ie the proportions look to be different).

I hope to get a saucer for the new cup soon and need to talk to someone about swapping a duo to get the pointy handle one.

There are so many versions of the Ambrico cup that all going well I may end up with seven different versions, and that is without even having any in the early 700 or 755 shapes.

---------
11/3/15
Simple Block Handle from First Cup to 1964
I have been looking at handle shapes on the Ambrico cups and looking at them from a wider perspective. I understand (and will reference at some point) that the fist Ambrico cup was the large clunky forerunner to the railways cups. As, then, the first use of a block handle it must be considered here as the forerunner to all others. There are two other types of block handle I will consider at a later time, the Railways handle (700 handle), which had at least two manifestations, and the scallop handle (755 handle), which appeared on both 700 and 755 shaped cups in various forms. So far I have identified four different simple block handles: one on a 700-shaped Ambrico cup; two different on Ambrico "Paris" cups; and, the latest so far, the CL vitrified tall hotel cup from 1964.
Derivation of 3610 tall hotel cup 18.3.64
Not only does the handle of the 3610 vit cup follow a trend dating from the earliest Ambrico cup shape, but it also closely mimics the silhouette of a particular Ambrico cup, making it a belated reference to earlier designs at a time when Crown Lynn was updating its entire cup range to produce the 780 and 781 (South Pacific and tulip) coffee and tea cups, the 859 e/w and vit 773 demitasses and the breakfast cup.

I have some montages to accompany this text and will work towards a separate topic later. I would also like to look at other (non-block) handles on Ambrico cups and see how they were developed for later cups.

I had assumed that the cup originally belonged to the ridged saucer (which has the earliest Ambrico mark) and that the impressed mark would thus be quite early but on comparing colour, and thickness of handle, with another cup i'm currently think it the later of the two. Note also that the finger hole in left handle is oval and in right handle is circular.

The righthand cup is the one Richard Quinn called the "Dresden" as he found no complete examples in his excavations of the Crown Lynn site. I think it is also a match for the one in the Auckland Museum display. 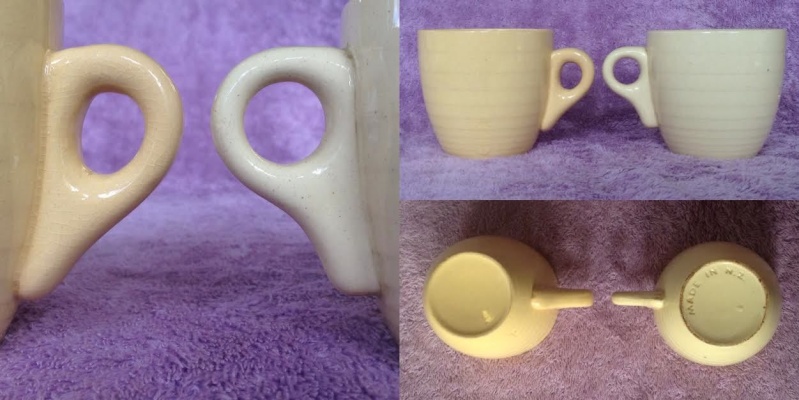 the recent acquisition is at right in each photo

The colours in the bottom right photo are closest to actual. I had thought that because the new cup handle looked chunkier that it would be earlier but it is thinner through and the cup is less yellow than the other, suggesting it could be later.

The plain Ambrico saucer could be a match for my early 753 cup. The well is a bit baggy but that seems to be pretty standard for Ambrico duos. 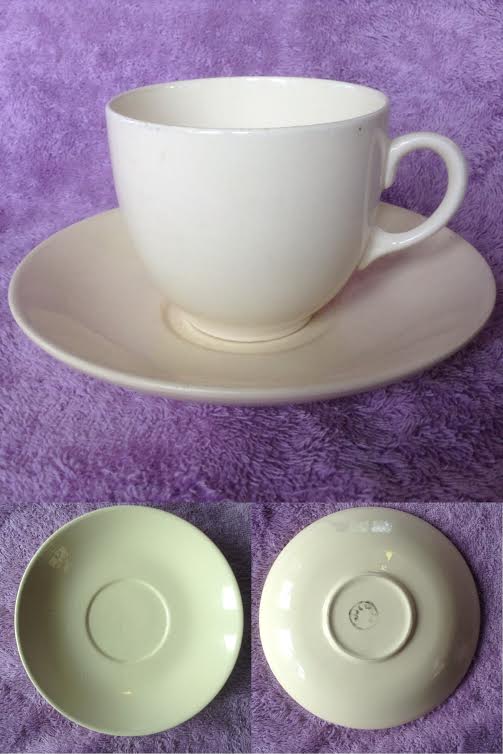 Note that the body colour is almost white in both cup and saucer but the saucer has an Ambrico mark rather than CL.

This is the only plain Ambrico saucer I have seen.
The plain body cups always seem to be accompanied with ridged saucers.

I will continue collecting Ambrico and hope to learn something from all these different handle/body/base-mark combinations one day. There is at least one "Paris" cup shape that I do not have yet and I have no early 700s or other heavy cups. Still looking.