Hi all :)I found this little "George" dish. I think the backstamp reads "Rangi" then "Christchurch NZ" underneath, with an inscribed "HP". Can anyone tell me anything about it? Also (if it's OK to ask here) roughly how much it would sell for online? Thanks. 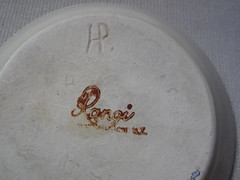 Hi there, That is a nicely made plate and personalised with George on it too.  I'm not sure how collectable Rangi pottery is as I've never heard of their work before.  Only way to find out what it's worth is to list it on TradeMe and the online marketplace will let you know it's value.

Rangi was the trade-name of a group of about 5 Christchurch lady potters in the 1950s who were semi commercial. The HP stands for "Hillsborough Pottery" which is what they called themselves. The main figure in the group was Doris Lusk, the great provincialist artist of Canterbury (She called herself Doris Holland as a potter). There is a reasonable write-up in Cone Ten Down on this very early group. They fired their wares at Rissingholm and I heard sometimes at Luke Adams.

This is a really nice little piece.

Thanks so much for all that great information.

Thank you so much for that information teaandcoffee.
I was aware of the Hillsborough Pottery Group, but not the Rangi name.