This rugby boot is marked Titian and has a different script. I am so happy to have got it. 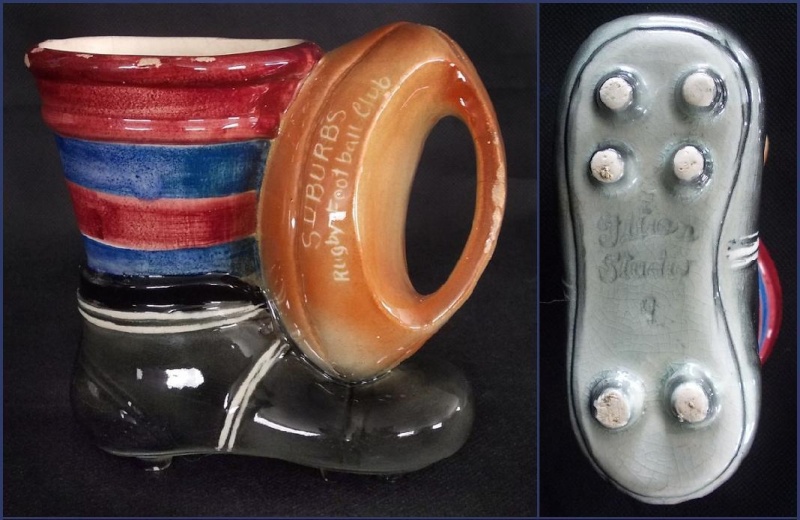 Wow! Yes that's the first time I've seen those words and I will transcribe them -
Suburbs Rugby Football Club.

I know there was an additional set made for a rugby tourto Australua. Would be interesting if there are any Suburbs fans out there that know?
Great find. First one I have seen.

I just had a look at old Titian posts and found a discussion about the rugby boot:
Titian Ruby Boot by signal red.
Could it be that my boot is the only one made in the Te Atatu Rugby Club colours of white, red and blue? The auction was run by retroexpo and I have copied some of what he has written on the auction:

After some investigation I tracked down Cameron Brown (Son of Cameron Brown Senior of Titian Studio and Sherwood Pottery) who worked with his father at Titian for over 40 years.
I had an enlightening discussion on the telephone.

Cameron remembers working on the Waikato boot with his father in 1956 and has assured me the only boots ever made were the Waikato and Springbok boot that appears on the back cover of Gail Lamberts NZ Pottery Commercial and Collectable.

One other single special boot was produced in the Te Atatu Rugby club colours for a close family friend who was very ill at the time. There are no other authentic Titian Boots other than these.