The container on the left is marked "Hand Craft New Zealand" in a very similar way to the Kiln/Clay Craft ware. Is it related? It has a very similar look. I have searched for it but nothing came up. Blue jug is 112 mm high, unmarked but identical form to yellow and brown jug which is marked "Kiln Craft" and the unmarked "Mint Sauce" jug on the end that I have already seen in the gallery.
Is the blue jug likely to be related?? Cheers 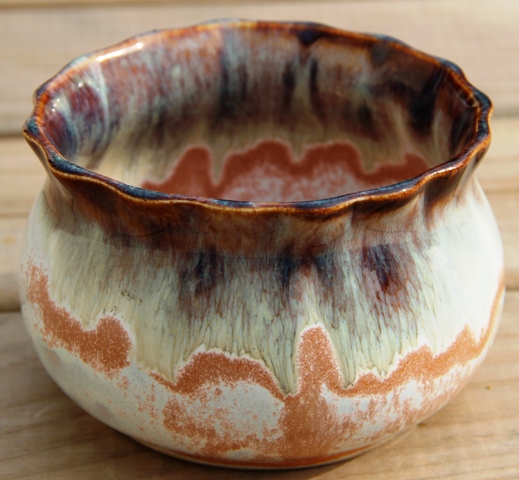 Mike, I think that first piece MAY BE an Orzel shape, although the glaze does not immediately ring any bells. I have yet to see Clay Craft jars in that shape.

When Orzel was sold as Adelaar, it often had a "Handcrafted in New Zealand" mark.
Check out some of your own Adelaar and see how it compares.

We have a few such marks on the site, not sure where but a search under Adelaar will get you there. Try and get a photo of the base that can be seen on screen.

Some Clay Craft is not marked, but what is has raised marking. Beach, Traditional, and KilnCraft have impressed marks,with the exception being the swooshy "KilnCraft".

The crimped-edge sugar bowl is already in the gallery ("clay craft sugar bowl") but the edge is not so obvious in my photo. Nice glaze.

The glaze colours of the middle jug (KilnCraft) were not used by CIay Craft, but you may see many different unmarked pieces in the yellow and brown. Some may be KilnCraft or earlier.

I don't think the larger of the two jug sizes is in the gallery.
Clay Craft shapes were often made in a variety of sizes. For example the bellied mug has three distinct sizes that are each represented in the gallery.

There is a bit of variety even within the distinctly different sizes of Clay Craft shapes. Sometimes, but not always, this depends on presence or absence of a foot ring.

Some Shapes from earlier incarnations of the company were dropped, some were altered, and many new shapes were created Clay Craft after thr a Clay Craft name was adopted.

Thanks Jeremy...very helpful again. Will have a look at Adelaar to see what you mean. Steep learning curve but very enjoyable and interesting.

Yes that jar has the same impressed mark as your corked storage jar under Orzel/Adelaar post. Very hard to see tho as filled with glaze. Glaze is quite matt tho.

More of that Orzel colour set:

I didn't recognise it because I do not have any AND it's on a flat surface there and a textured surface here.

Oh! If that is an Adelaar mark then the canister belongs in the Adelaar gallery rather than Orzel.

The Clay Craft glaze on the sugar is a funny one. I have only just recognised it as it can present so differently. The brown at the top sometimes breaks to blue, and the lower brown and white sometimes looks pink.

Same as the pinky mug (handle turned away) here:
http://newzealandpottery.forumotion.net/t4304-a-selection-of-clay-craft-glazes#14990

And the teapot here:
http://newzealandpottery.forumotion.net/t191p15-clay-craft#14293

And I don't usually use emoticons but

Last edited by Jeremy Ashford on Sun 4 May - 19:50; edited 2 times in total (Reason for editing : Celebration)

Yes the container only has " Handcrafted" and then "New Zealand" opposite on it. Would that make it Adelaar?? I rather like some of that Claycraft work your links to showed! Thanks again for the info...very helpful and interesting.

I'm pretty sure it's an Orzel shape and the glaze is a match for the cream and sugar I linked to. I haven't seen that Handcrafted on Orzel other than Adelaar, and never on Clay Craft.

Uncovered the rest of that Clay Craft...blue. The spoons is marked but the middle sized jug and covered sugar are not. haven't seen the covered sugar anywhere here before??