Hmmmmmm I've asked if the spoon has any markings on it.

A quick response from the trader says that it's definitely Crown Lynn.
I noticed her Blue Jay/Fantasy listing previously, mainly because they said that Blue Jay wasn't anywhere on the net .... ah nah we already had a pic

So how can we verify this spoon?
1104 Spoon was first made 18.1.71, now I will have to find dates for the pattern Fantasy British. Immediately I think of the late 1950's and early 1960's with the word British, but I will look into it further when I get a moment.

The spoon has an Asian soup spoon shape to it doesn't it?

Genuine-Gina is a member on here - if this is the spoon can we use the photo to add to the gallery?

I couldn't find Blue Jay or Fantasy [other than the vitrified Fantasy] in the records that I have. Do you have either of those patterns in your records Janice?

I don't recall anything from when I was at the museum. Not even in the potters notes, but that would be on the late end of the 50's early 60's.
I wondered.... before we saw the spoon on TM whether the spoon was something made for a 'commemorative piece" and was rather suprized to see a spoon shaped like that and having that pattern. Crown Lynn always seems to amaze !

I will have another read through my notes.
BTW if we are looking at Blue Jay - which is early 50's - museum stuff is later, so we may not be successful in finding anything??
Janice

I'm sceptical that the spoon is Crown Lynn, only because the decal was available to all and sundry. Unlike some of the generic patterns like Nirvana and the Earthstone range for example. Yes Janice most of the records I have start from the early 1960's and these patterns seem to be earlier. Only the adverts at the Auckland Museum go earlier and I don't think I've seen either of those patterns in them.

There is a drawing of a spoon that goes with the Strange Kiwi Mustard. The Strange Kiwi set was made in 1977 though, so it is too far removed from the 1104 spoon made in 1971. Oddly there is no number for the Mustard spoon.

Umm- that is strange.. I would have gone with the mustard spoon theory, unless they made the spoon for something else 1971 then in 1977 paired it up with the strange Kiwi?

I will have to pay more attention to spoons now... hopefully one of us will find another

I was lucky enough to see a drawing of the Crown Lynn 1104 spoon and it looks very much like a normal spoon, so we can eliminate the one that was advertised in the auction above.

That clapped out half a spoon is a Midwinter, Cassandra pattern ladle. That seller best beware of Miss Marple!  raahaahaahaahaaaaaaa 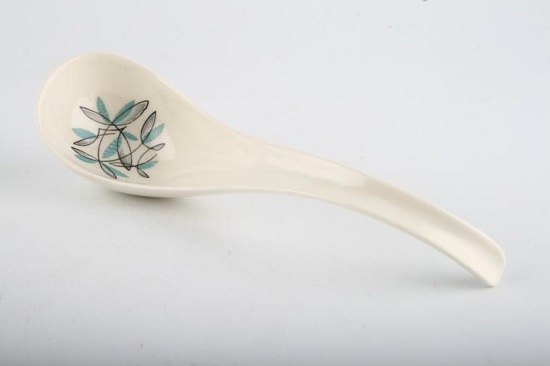 Great sleuthing fi as that is exactly the same as the spoon that was sold as a definite Crown Lynn spoon and it will turn up again one day. And it had the end broken off didn't it ,.....?

OH MY! I didn't know it actually SOLD! No one had bid on the auction that we commented on...... and yes, it was a modified version of the original. The handle had been snapped off and filed smooth. BAD BAD BAD!

Yes the bowl, spoon and incorrect history sold for $25 ....
when it was listed for the 2nd time.