Latest topics
» Shape 21 Handpotted was made in three sizes.

» Need help with identification of mark. It's by Elizabeth Woodfield

» Double handled urn vase was made by Orzel

» Please help identify these. These were made by Kermiko

» PLEASE HELP TO IDENTIFY - MARKED TO BASE

Can anyone remember why we decided the shape we have in the gallery was correct and the Auckland Museum photocopy not?

My recollection was that another came up on trademe identical to mine and had the number on it.

I dont know if anyone can confirm this but I guess in the absence of backstamp and number we should comment why we think something is what we say, as a confirmation point.

I can remember being convinced we were right at the time but now have my doubts as I have no record of proof.

This was a while ago now....
All I can remember is that when the waif 539 turned up to be put into the shape catalogue...
there was already a 539 there... so I put it into waifs and strays.
I do remember asking about it at the time.
Not much help I'm afraid Heather.

As far as I recall we hypothesised that the Auckland Museum image that is now in waifs was the same shape but upside down and somehow distorted by the photocopying process. I think I tweaked the image, narrowing it, and ended up with something very similar to the photo in the shape gallery.

Check out his auction..... we may have seen something like this before ??

Good spot Ev..that one says it has the number on the back and it is exactly like mine..and I really think the same thing happened when we were deliberating, someone else listed one with the number on the reverse.

The mystery continues, but we leave ours be and I will add a comment and keep the auction detail as a kind of proof. I cant read the number on the base can you?

In 'Miller's twentieth-century ceramics: a collector's guide to British and North American factory-produced ceramics' [ Paul Atterbury, Ellen Paul Denker, Maureen Batkin: Publisher: London : Miller's, 1999. ISBN: 1840000341] - in the Bretby section (p31) there's a photo of:
"Wall pocket 1940s. With its matt glaze and stylized shell shape, this wall pocket was designed in the 1930s and was still in production in the early 1950s."

This shape Tony.... like the fabulous green one that you sent me that I haven't taken a photo of yet...

and here is the 539 from the Auckland Museum that is causing the grief ... just for those who don't know what we are on about

This is a close up of the bright green .539. wall vase that Tony sent over ....
it has the number stamped on the back. 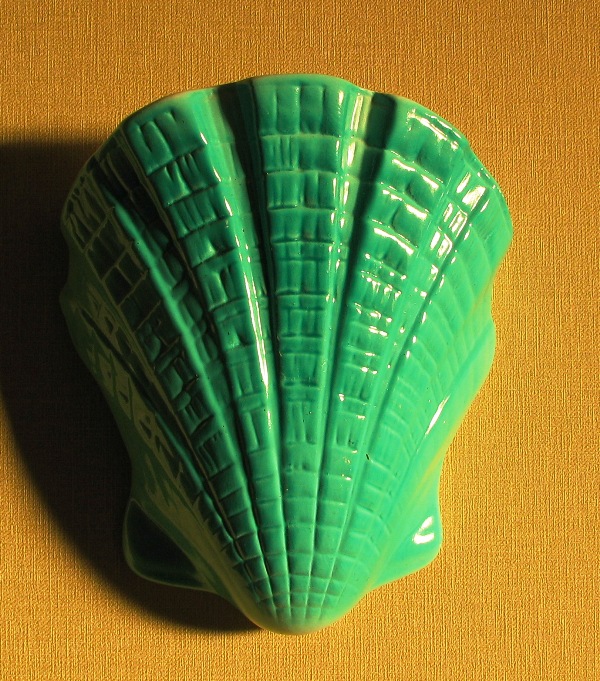